Foreign Minister Sergei Lavrov issued a new call Monday for the Syrian government and opposition to work together to expel all "terrorists and extremists from Syria," news agencies reported.

At the start of talks with Syrian Deputy Prime Minister for Economic Affairs Qadri Jamil, Lavrov said the goal agreed upon at a meeting of the Group of Eight major economies last month to expel the "terrorists and extremists" should "become one of the main points of the proposed international [peace] conference."

"To our regret, unlike the government of Syria, a significant part of the opposition, including the National Coalition, has not expressed such readiness yet," he said, referring to a largely exiled opposition group.

Russia, the most powerful foreign backer of Syrian President Bashar Assad, and the United States said on May 7 that they would try to bring Syrian government and opposition representatives together at a conference to try to end a conflict that has killed more than 100,000 people since March 2011. No date has yet been set for the conference.

They want talks in Geneva to try to agree on a ceasefire and the makeup of a transitional government. Sources said Friday that the initiative had stalled and that there was a risk such talks would never happen. 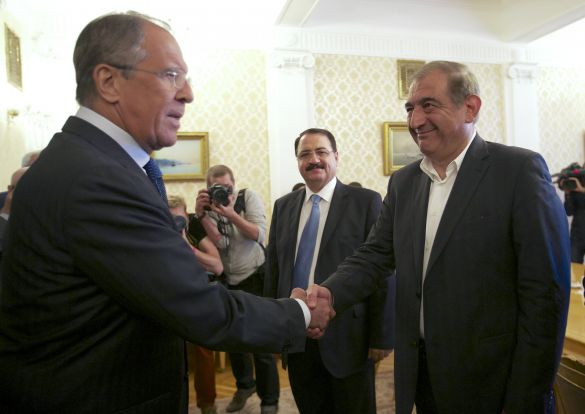 Sergei Lavrov, left, greeting Qadri Jamil before their meeting in Moscow on Monday.

Jamil blamed the West for what he called the "siege" against his country and said he expected a loan from Russia would be arranged by the end of the year. He did not give a figure for how much the loan was for.

"The main responsibility for this siege lies in the West, which is the main perpetrator of the ongoing suffering of the Syrian people," he was quoted as saying.

The Obama administration has expressed an intention to send military hardware to some anti-Assad insurgents in part to present a bulwark against units it considered "terrorist organizations."

But with funding from Gulf-based individuals, Islamist brigades have taken a leading role in rebel-held regions of Syria, filling the vacuum of power by setting up religious courts and governance bodies.

Moscow has criticized the U.S. plan, saying there should be no military solution to the crisis.

Part of the Kremlin's concern over armed rebel groups stems from its fear that militants currently fighting in Syria could later commit acts of violence on Russian soil.

On Friday, acting Dagestan head Ramazan Abdulatipov said local Islamic militants were fighting alongside rebels in Syria and that the "export of extremists" should be prevented by making it hard for militants to leave Russia.

"These people go there and they will come back tomorrow with the backing of international extremist and terrorist organizations," Abdulatipov said during a meeting with local officials.

Andrei Konin, the head of the regional branch of Russia's Federal Security Service, told the meeting that about 200 residents of Dagestan were currently in Syria, and some of them were fighting alongside rebels.

Konin said many people from Dagestan went to Syria for studies but ended up in rebel ranks to join what they considered a jihad, or holy war.

Some observers have voiced concern that militants from the Caucasus who joined the Syrian rebels could try to take revenge against Russia for its support of Assad and try to strike 2014 Winter Olympics in Sochi.

Earlier this month, a top Chechen rebel warlord called on militants to disrupt the Sochi Games, which he described as "satanic dances on the bones of our ancestors." Russian officials have pledged to make the games "the safest Olympics in history."

Dagestan has become the epicenter of the Caucasus insurgency, with rebels mounting nearly daily attacks on police and other officials.

Muscovite Rodion Logvin decided to flee to the South Caucasus nation of Georgia to avoid being conscripted into the Russian army a few hours after mobilization...
deadly attack

The death toll has risen to 15 people, including 11 children, after a man opened fire Monday at his former school in central Russia, authorities said. The...
escalating rhetoric

Russia Tells U.S. to ‘Cool Down’ Over Putin’s Nuclear Warning

Russia’s deputy foreign minister said on Monday that the United States should "cool down" after Washington warned Moscow against nuclear weapons...