The longtime director of the Bolshoi Theater has been replaced amid an inquiry into the embezzlement of 90 million rubles ($2.8 million) of state funds during the refurbishment of the legendary theater.

The dismissal of Anatoly Iksanov, 61, who has held the position since 2000, also comes several months after a high-profile acid attack on the theater's artistic director, Sergei Filin.

Iksanov has been replaced by Vladimir Urin, head of Moscow's Stanislavsky and Nemirovich-Danchenko Musical Theater, Culture Minister Vladimir Medinsky said during a meeting of the theater's employees on Tuesday, RIA Novosti reported.

Iksanov will be appointed as an adviser to Medinsky.

Explaining Iksanov's dismissal, Medinsky vaguely remarked that Iksanov “had done a lot” but that “human powers have their limits,” RIA Novosti reported. “This uneasy situation means that the theater needs a new start” Medinsky said, without elaborating.

He also denied that Iksanov had been fired, however, saying he had left of his own accord, Reuters reported. The two men sat together at the news conference, and at one point Iksanov said, “Thank you, Bolshoi.” 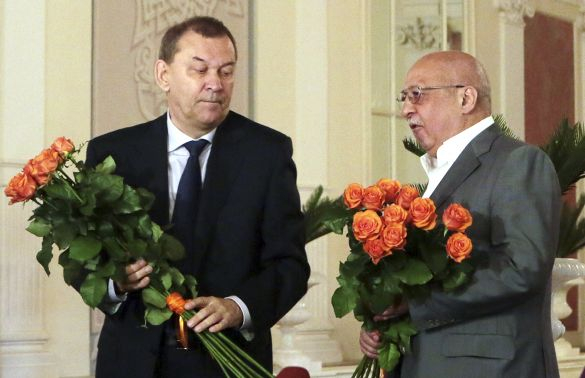 Deputy Prime Minister Olga Golodets told the news conference that all of the theatrical experts consulted by the government unanimously supported Urin's candidacy.

A symbol of national pride for centuries, the Bolshoi reopened in 2011 after a $1 billion renovation. Despite the lavish sums, much of the work was of poor quality, with cracks appearing in the walls and gold leaf crumbling away.

In mid-June, the Investigative Committee opened a criminal probe into suspected large-scale embezzlement of state funds allocated for the theater's renovation.

The renovation was publicly criticized by a former soloist ballet star of the theater, Nikolai Tsiskaridze, who said that the theater had been made to look like a “Turkish hotel.”

Tsiskaridze reportedly fell out with Filin, who was left almost blind after the January acid attack and continues to receive treatment in Germany. The Bolshoi said last month that Filin had been blinded in one eye and had only about 10 percent of normal vision in the other, despite undergoing 18 operations.

In March, investigators arrested three suspects in the attack on Filin, including one of the theater's dancers, Pavel Dmitrichenko, who has ties to Tsiskaridze. Dmitrichenko confessed that he was behind the attack but said he wanted Filin beaten, not defaced and blinded. The investigation is ongoing.

Tsiskaridze, who was also in conflict with Iksanov, was fired from the theater in late June. Medinsky said Tuesday that there were no negotiations about resuming the contract with Tsiskaridze at the Bolshoi Theater. Tsiskaridze said earlier he was being hounded out of the theater following suggestions by Iksanov that he might have played a role in inciting the attack.

Urin will be under intense scrutiny over the unity of the company, the quality of productions and his ability to restore the reputation of the more than 230-year-old theater.

"I do not plan any revolutions. I understand perfectly well that in this theatre, as in any other, a single person cannot do anything alone. I very much hope that the majority of people working in his theatre — talented, remarkable people - will be my allies," Urin said.

Theater critic Raymond Stults called Urin a "very capable professional" who may be able to make "significant changes" in the management team, reform the system of payments to artists so that they receive decent compensation even when they are not involved in performances, and choose different leading artists.

Stults also said Iksanov had wanted to leave when his contract expired three years ago but authorities couldn't find a replacement for him. The scandals with Filin and Tsiskaridze probably "spurred" his dismissal, he said.

As for the fact that Iksanov's experience was mostly in the sphere of administration, Stults said there would “probably be a higher level of concern about the level of artistic quality."