Thousands of passengers were evacuated from two metro stations in downtown Moscow during rush hour on Wednesday morning after an electrical fire sent smoke pouring into the stations, forcing a partial shutdown of one metro line and leaving riders scrambling to their destination.

Emergency crews evacuated 4,500 travelers from the Okhotny Ryad and Biblioteka Imeni Lenina metro stations, just a stone's throw from the Kremlin, after a high-voltage wire caught fire in the tunnel that runs between the two stations at about 8:20 a.m.

Train service on the central part of the line was quickly halted.

Passengers, many covering their faces, made their way through the haze to the exits. A video posted online showed first responders helping people out of a train stranded between stations. Authorities said the fire was extinguished by 9:04 a.m.

But transportation woes were just beginning for riders throughout the Sokolnicheskaya metro line, better known as the “red” line, where the accident occurred.

Entrances to at least four stations were closed due to smoke, and thousands found themselves packed like sardines on crowded station platforms and overloaded city busses.

Katerina Abramova, 19, a student, said the platform at the Park Kultury metro station was a sea of passengers by 9:20 a.m. It took Abramova about 20 minutes to reach the escalators, which weren't working in either direction, forcing even the elderly to climb all the way to the surface. 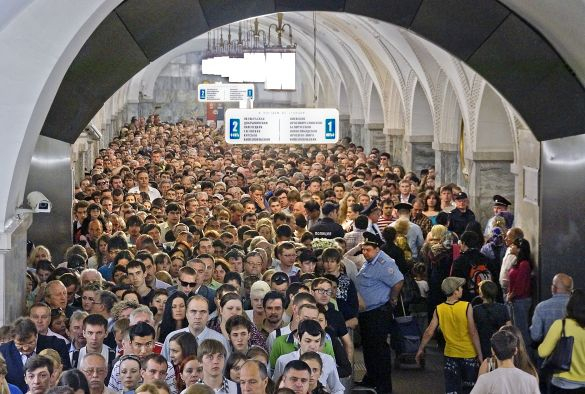 People waiting for the escalator to exit the Circle Line at Park Kultury station after access to the Red Line closed. (Vladimir Filonov / MT)

“People got sick. They lay on the floor at the top of the escalators, unconscious, until medics arrived. It was horrible,” Abramova said by telephone on Wednesday afternoon.

Galina, 41, standing at the entrance to Okhotny Ryad, said the accident wreaked havoc for the nearby Bolshoi Theater, where she works.

“Nobody came to work this morning, everybody was late. We couldn't get here even by car because the metro closings caused massive traffic jams,” she said.

At least one passenger nearby was able to go with the flow. Yelena, 22, said the accident created no great convenience for her. “It's just a 5-minute walk to the next station,” she said.

Sixty-six passengers sought medical attention, 13 of whom were hospitalized, the Emergency Situations Ministry said in an online statement.

Three women, ages 26 to 47, were sent to the emergency room with symptoms of smoke inhalation and are currently in fair condition, a medical source told Interfax.

A joint commission of metro authorities and metro police will investigate the cause of Wednesday's accident, city police told RIA Novosti.

The Sokolnicheskaya line runs diagonally through central Moscow, with stations at major tourist attractions, including the former KGB headquarters at Lubyanka Square, the Kremlin, Red Square and Christ the Savior Cathedral. 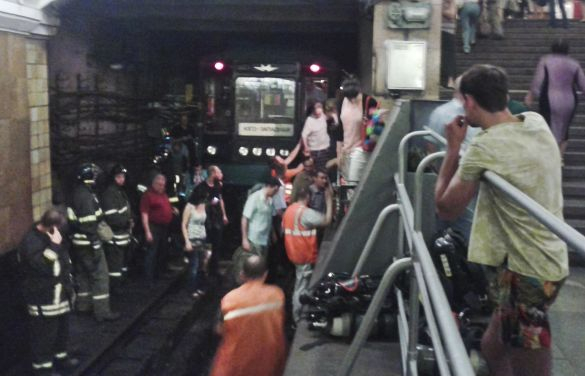 As in similar emergencies in the past, taxi drivers reportedly charged inflated fees to marooned commuters. Itar-Tass reported that drivers near the Komsomolskaya metro station hiked the price for a ride to the city center to as much as 1,500 rubles ($47), at least three times the normal fare.

Full train service on the Sokolnicheskaya line was restored by about noon, only to be suspended again less than an hour later due to a short circuit, the emergency officials said. Service was restarted again — this time for good — just after 2 p.m.

The government's response to the transportation crisis drew mixed reviews.

Abramova, the student, said a voice over the loudspeaker urged passengers to keep calm, but nobody explained what was going on. Some read the news about the fire on their smartphones, but most simply didn't know the cause of the shutdowns. Thankfully, panic did not set in, she said.

“I don't think the government's reaction was particularly effective,” she said.

Twitter user Irina Gorbenko gave a different picture. “Our evacuation went smoothly, and nothing happened during the hour that we stood in the train car,” she wrote. 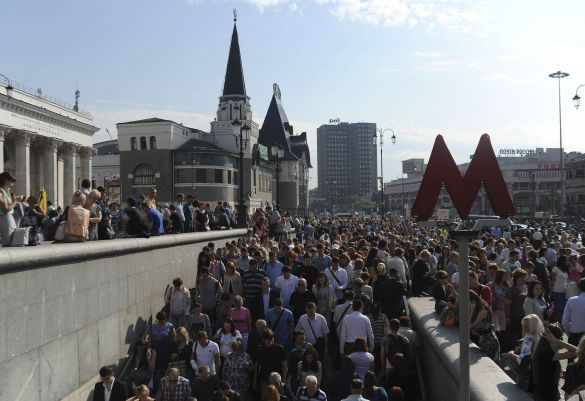 A Moscow Times employee said a police officer near Kazansky Station suggested that stranded passengers either walk to the city center or take a tram directly to Kursky Station. But as anybody who attempted to take the latter piece of advice quickly discovered, there is no such tram.

Also, only one of three major mobile phone operators, MegaFon, said it received a request from the Emergency Situations Ministry to text subscribers about the situation. Representatives for MTS and VimpelCom, which owns Beeline, told RIA Novosti that they received no such instructions.

In a separate metro mishap on Wednesday, a technical glitch left a train on the Serpukhovsko-Timiryazevskaya (“gray”) line stuck between stations for about 30 minutes.

The Moscow metro, one of the busiest in the world, serves more than 7 million passengers daily and is famous worldwide for its many palatial stations, most of which were built during the Soviet era.

The EU insurance ban comes as Moscow seeks to ramp up sales to China and India.
Active efforts