In an effort to enhance its image as a global player in combatting drug flows, Moscow welcomed 120 top anti-drug officials from around the world on Wednesday to discuss possibilities for cooperation in curbing an issue responsible for an estimated 200,000 deaths annually.

Addressing participants at the International Drug Enforcement Conference, President Vladimir Putin said Russia is ready to pull its international weight in the Collective Security Treaty Organization, a Russia-led regional security group, and with the EU in making "practical steps toward eliminating the drug threat."

"No matter what Russian region I go to, mothers approach me saying what they have to deal with in their lives — problems, tragedies linked to drug use," Putin said.

Illicit drugs have become a top security threat to Russia and a negative influence on the already dire demographic situation. Russia's Security Council lists illegal drugs as one of the three main security challenges facing the nation, alongside terrorism and illegal immigration.

The current top DEA official, Michele Leonhart, said at the conference that "no country can be successful in countering drug smuggling by itself." 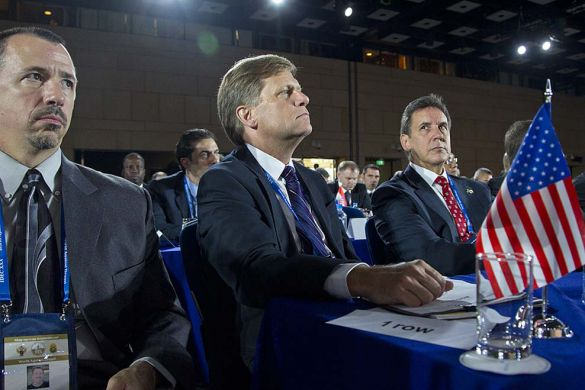 "Drug dealers use various global finance and communication networks," Leonhart said. "There are various approaches to this problem, but there are common elements, too. Coordination and bilateral drive toward professional partnership are important."

In one recent international effort, a senior Tajik drug dealer who controlled a heroin-smuggling route to Russia was detained in Dubai in December 2012 by a coalition consisting of Russia's Federal Drug Control Service, Interpol, the U.S. DEA, and law enforcement agencies from Kazakhstan, Belarus and the United Arab Emirates.

Russia's anti-drug agency also recently demonstrated its global reach with an announcement by its head Viktor Ivanov, who said in March that Russia and Nicaragua had broken up a trafficking ring headed by Mexican drug lord Martin Flores.

Russian law enforcement and anti-narcotics agencies from around the world will soon have another chance to prove their dedication to joint efforts when U.S.-led forces withdraw next year from Afghanistan, currently the world's largest heroin producer.

Ivanov said that at least 50,000 tons of opium are currently stored in Afghanistan to compensate for a possible bad harvest.

"More than a million people have become victims of Afghan heroine in the last decade alone. In contrast, no more than 10,000 people have died in terrorist acts over the same period," he told Rossiiskaya Gazeta in an interview published Wednesday.

At the same time, drug trafficking itself is contributing to terrorism.

"Extremism, terrorism and emerging violence in general are in essence derivative of the two global  drug-production centers — heroin in Afghanistan and cocaine in South America," Ivanov said at the conference.

The conference will continue in Moscow on Thursday and Friday.