Contribute Today
By Alexander Bratersky
May 30, 2013

The newly elected head of the Russian Academy of Sciences said his organization could contribute to the country’s innovation policy, and he supported the Skolkovo innovation hub.

Vladimir Fortov, 67, whose research has been used in the defense industry, received the majority of the votes cast by academicians in Wednesday's election, beating Nobel Prize winner Zhores Alferov, who serves as a State Duma deputy with the Communist Party.

His other rival, current Academy of Sciences vice-president Alexander Nekipelov, a member of the board of directors of Rosneft, came in third.

“In order to change the situation, we need new technologies, and it can’t be done without the Academy of Sciences,” Fortov told reporters Thursday after his first press conference in the new role.

A nuclear physicist, Fortov has been active in the business world, sitting on the technical council of state technology corporation Rusnano and advising on the Skolkovo innovation center. From 1997 to 1998, he was the Science and Technology Minister in Prime Minister Viktor Chernomyrdin’s cabinet.

Fortov promised to conduct reforms in the Academy of Sciences and to mend fences with Education and Science Minister Livanov, who is at odds with academicians after calling the academy "ineffective."

"I have known him for a while," Fortov said of the minister. "We have to start a dialogue and look for common points on which to communicate," he said, according to RIA Novosti. 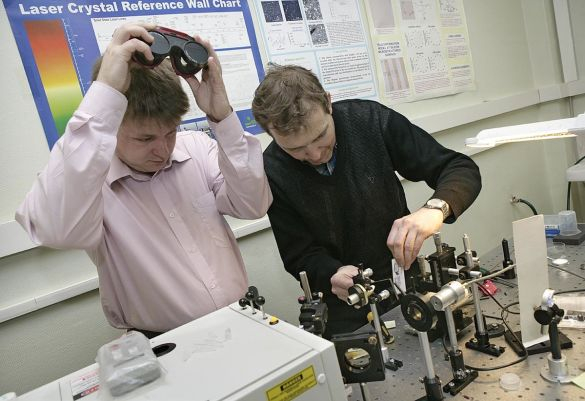 Fortov says that scientists and businessmen need to work together at finding better forms of cooperation. (Igor Tabakov / MT)

Among Fortov's immediate proposed reforms is a reworking of the academy charter that would require a rotation of the academy's presidency, restricting holders to two five-year terms in office.

Founded in 1724, the Academy of Sciences was Russia's and then the Soviet Union's main scientific institution, producing fundamental research in mathematics and physics. The academy has more than 1,200 members.

Under the previous president, the academy's image was tarnished after several members endorsed Viktor Petrik, who has been derided by other members as a "pseudo-scientist." Among Petrik's inventions is a filter that he claims can make even heavily polluted water drinkable.

Experts said the newly appointed head would carry out some reforms to give the academy more interaction with business community.

“I assume that he will be following the line for innovation,” said Ilya Ponomaryov, a left-leaning Just Russia deputy who knows Fortov because both of them were involved in Skolkovo projects.

He added, however, that business currently has “weak” interests toward the academy: “At first they say present something to us then we can give the money, but academics want the money first,” said Ponomaryov.

But while he said the situation was similar in many countries, elsewhere science led to many innovative startups, unlike in Russia.