Contribute Today
By Anatoly Medetsky
May 27, 2012 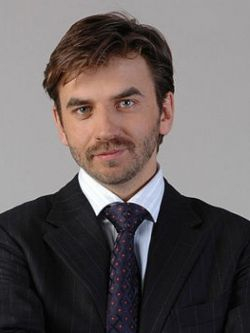 Minister Mikhail Abyzov twice denied in a November interview that he would accept a government job.

"I am not going to work as a public servant," he said in a Vedomosti interview.

The reporter pressed on, only to receive another rejection of the idea that he could become a minister. "My friends know that the one thing I could do in public service is become chief of the traffic police — to abolish it," he joked.

Yet six months later he accepted from Prime Minister Dmitry Medvedev the portfolio of the minister in charge of relations with the expert community, a job that had never existed before.

His supersonic rise through Russia's political firmament was puzzling. Billionaire Abyzov showed no appetite for politics before. One thing that may have helped to catapult Abyzov into civil service is his affinity for all things high-tech, which he shares with Medvedev.

"What makes them close outside of politics?" asked Vladimir Pribylovsky, president of the Panorama think tank. "Medvedev is a fan of computers, and Abyzov wields some influence in this area."

Abyzov's Ru-Com group of companies is involved in investing more than $300 million in online social media, new types of communications and alternative energy, among other things, its website said.

The platform for the investment is the Digital October center, which opened in March 2011 "as part of the strategy for the modernization of the Russian economy enunciated by President Medvedev," the website said. Medvedev was president before becoming prime minister earlier this month.

Digital October is cooperating with Medvedev's showcase high-tech project Skolkovo, which is currently ramping up.

But Abyzov's fortune, estimated at $1.3 billion by Forbes magazine, came from Russia's more traditional industries: energy and engineering. Forbes ranked him as the 68th-richest businessman in the country.

Engineering company E4 accounted for 15 percent of the market in 2010, the latest data on the website. Its customers are electricity producers, chemical enterprises and oil and gas firms.

Abyzov created Ru-Com in 2006 and served as its board chairman — and board chairman of E4 — until January this year, when then-President Medvedev appointed him as an adviser with responsibility for liaising with the expert community.

Medvedev first voiced the idea of regular consultations with professionals outside the government — dubbed the Open Government — at a meeting with supporters at Digital October. Abyzov was one of them. The group banded together shortly before in a move apparently engineered by the Kremlin.