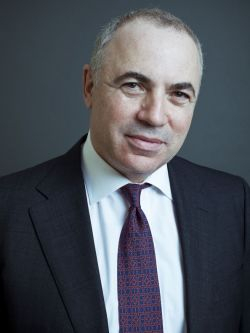 We live in the most transformative era the world has ever seen. The familiar economic systems and structures that have evolved over time, and that our models and business strategies so deeply rely on, are changing as a result of powerful macro-economic forces conspiring to reshape our world. In January 2011, at the World Economic Forum in Davos, ManpowerGroup declared that the world had entered the Human Age. This new, chaotic reality is characterized by a rapid pace of change and complexity, requiring an entirely new approach to business. Resources that were once limited are now plentiful, and those that were once plentiful are now limited, such as skilled human talent — the single most important engine of productivity in the Human Age.

In the past, access to capital was the competitive advantage that fueled productivity. Today, talent is quickly becoming the scarce resource. According to ManpowerGroup's most recent Talent Shortage survey, one third of employers around the world are finding it difficult to secure the talent they need.

In the Human Age, corporate means of attracting and mobilizing talent will be the competitive differentiator.  In this case, all contemporary practices and philosophies from the 21st century might need to be refined in terms of how companies hire, reward, engage and develop talent. Here are some recommendations to help employers improve on their workforce pipeline and stay competitive in the Human Age.

Tap into overlooked and underused talent pools. It's no secret that the recent spikes in unemployment have particularly affected younger age groups. A newspaper article published in The Guardian in April 2011 reported that 40 percent of the unemployed in the UK are between the ages of 16 and 24. These groups have suffered serious social problems. The same is true for Russia. Yet, while young people often do not possess the experience or skills that companies need, they are quick learners. By taking a more active role in various educational institutions as well as vocational training programs, and creating their own development initiatives, organizations can make better use of this age group. Older, more experienced members of society also offer opportunities for companies to enhance their workforces. In the past, many companies considered these workers too old, stubbornly set in their own ways and not worth the investment because they were unlikely to work for many years. In recent years, however, companies have discovered that such groups are easily re-trainable, as a large number of these people actually want to be productive and be needed. For example, one German initiative has had great success in connecting companies with retirees who are still active enough to handle a full-time job. It should be noted that older workers have a sound understanding of appropriate workplace behavior, and with advances in health care, they may have the energy to work comfortably into their late 60s and 70s. The potential return on investment for companies is huge.

Collaborate with educational institutions and governments. For decades, schools and universities set their curriculum with barely a glance at the needs of the business world around them. This has played a role in creating the current skills gap and the general lack of understanding of proper workforce conduct. Improved collaboration will produce a pool of workplace candidates who are better trained.

Re-evaluate how to recruit, develop and compensate talent in certain markets. This will be crucial in a more globalized world where people's perspectives vary greatly. Given increased public access to information, companies will be under more pressure to make fair decisions in every area. Techniques used in managing these fundamental HR functions will vary among locations.

Assess skills more precisely and comprehensively. Assessments should cover not only specific expertise, but also communication and other softer skills. Companies that pinpoint weaknesses faster than their competitors can take measures to quickly fix these shortcomings.

Strategically relocate in-demand talent within and across countries. Talent mobility has grown worldwide. ManpowerGroup's 2011 Borderless Workforce Survey of more than 25,000 employers from 39 different countries and territories has found that about one quarter of responding employers had been seeking foreign talent to solve their skills shortages.

Develop a broad understanding of social media functions. Many companies have improved their use of social media to enhance their employer brands, which help to attract qualified candidates. Some have designated individuals to not only file items that are informative and reflect well on the company but also to monitor commentary — both criticism and praise. A few such social media specialists target influencers, key individuals who can sway opinion about organizations with their writing and expertise. Followers of companies, including job seekers, increasingly rely on social media to learn about the salary, benefits and how particular managers treat their employees. And it works both ways: companies can also use social media to find out more about candidates. Potential employees reveal a great deal about their careers and work history through their postings and interaction on social media sites.