Large swathes of Siberia are in flames as what looks to be another record-breaking wildfire season sets in.

Environmental group Greenpeace said last month that this year's wildfires are already twice as large as those of the same time last year.

Acting Emergencies Minister Alexander Chupryan said this week that Russia has seen over 4,000 forest fires across 270,000 hectares — an area larger than Luxembourg — so far this year.

They also threaten human lives, with 16 people having died as a result of the fires in the past week alone, Chupryan said.

The wildfires have become increasingly destructive in recent years as Russia's northern regions warm faster than the rest of the world. The 2021 wildfire season was Russia's largest ever.

President Vladimir Putin told Chupryan that "we cannot allow a repeat of last year's situation, when forest fires were the most long-lasting and intensive of recent years." 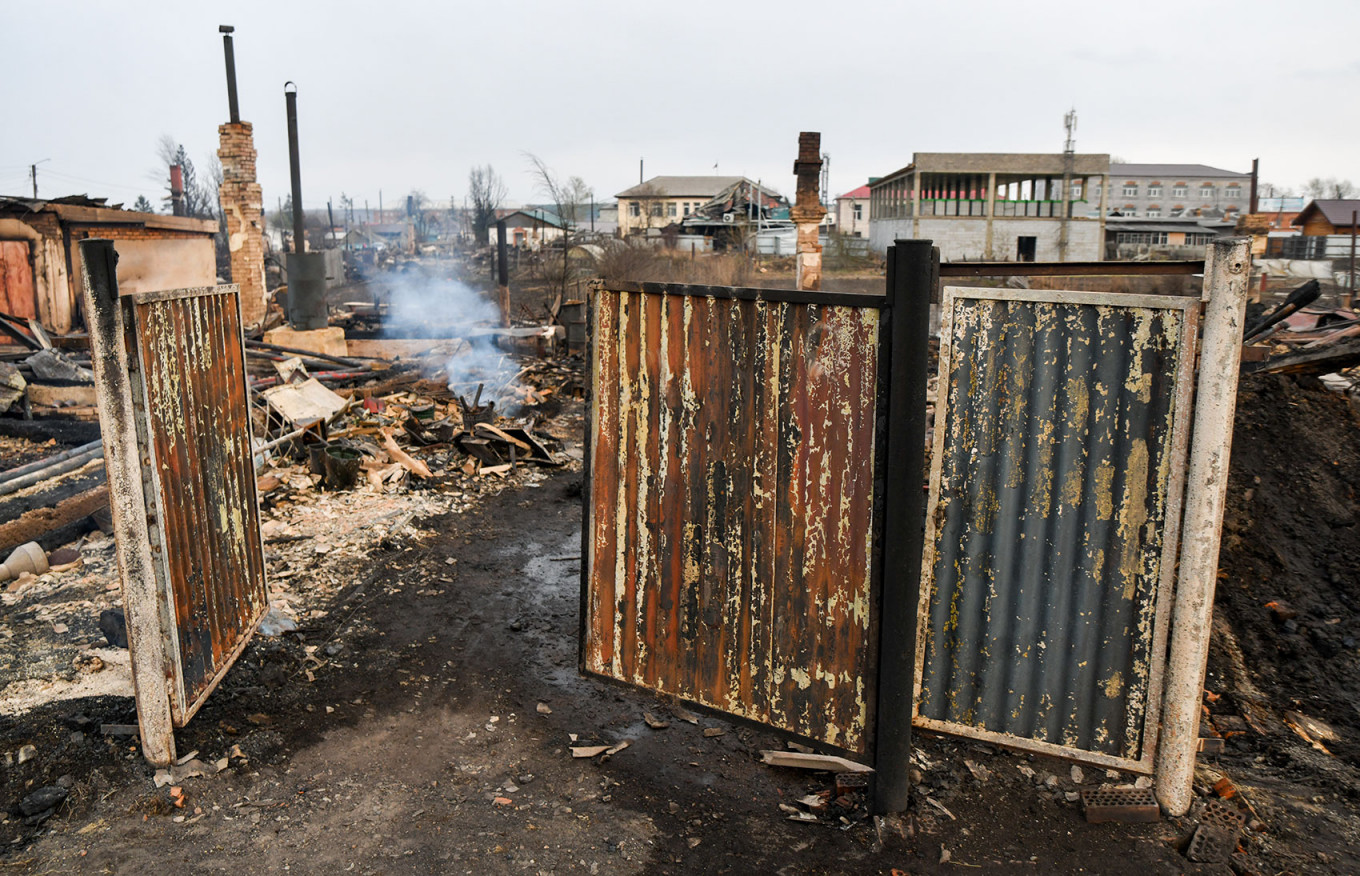 Damage from a wildfire that spread to urban areas in the town of Uyar in Russia's Krasnoyarsk region.
Alena Kovrigina / TASS 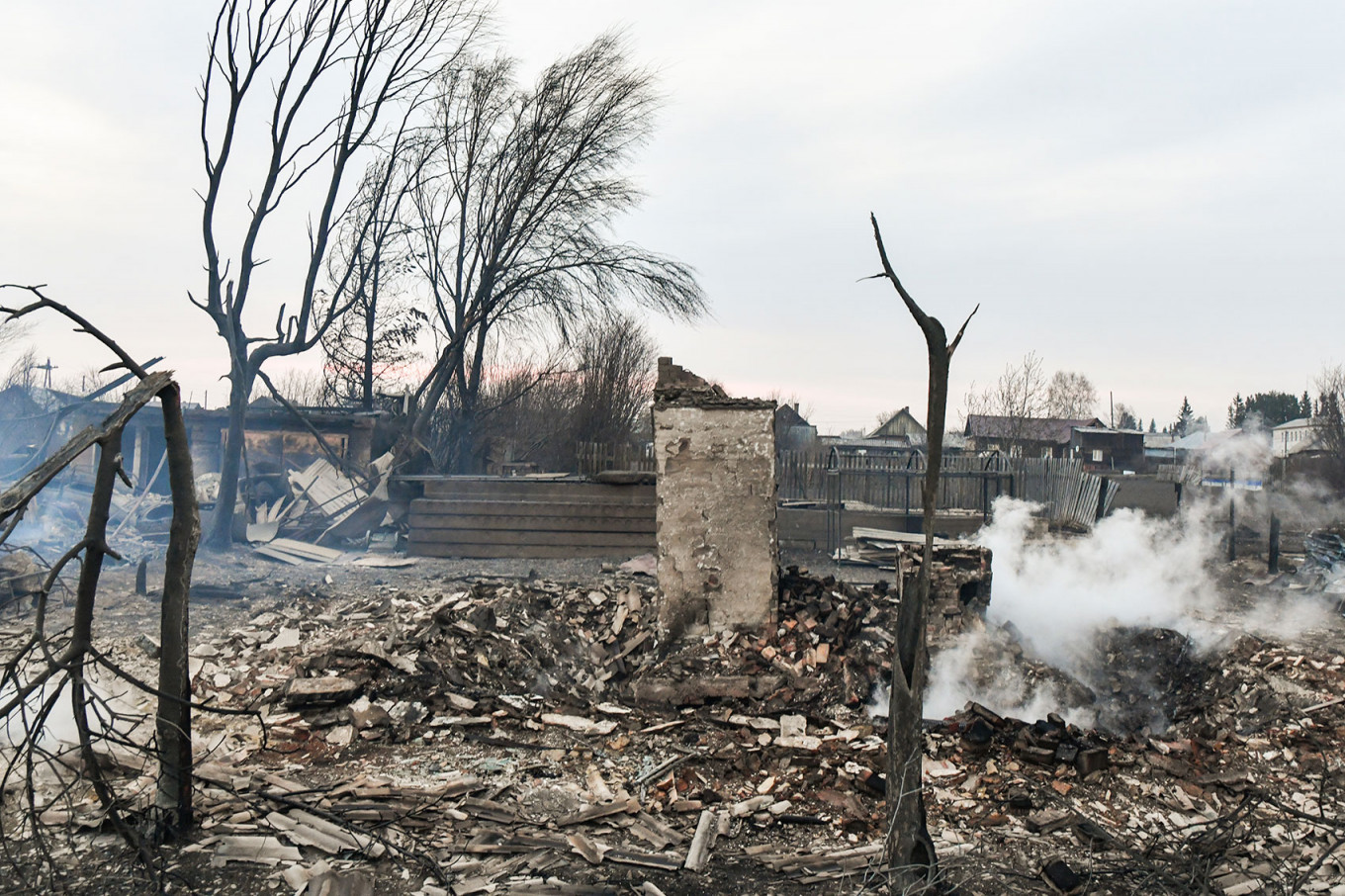 A state of emergency has been declared in Krasnoyarsk region over the wildfires.
Alena Kovrigina / TASS 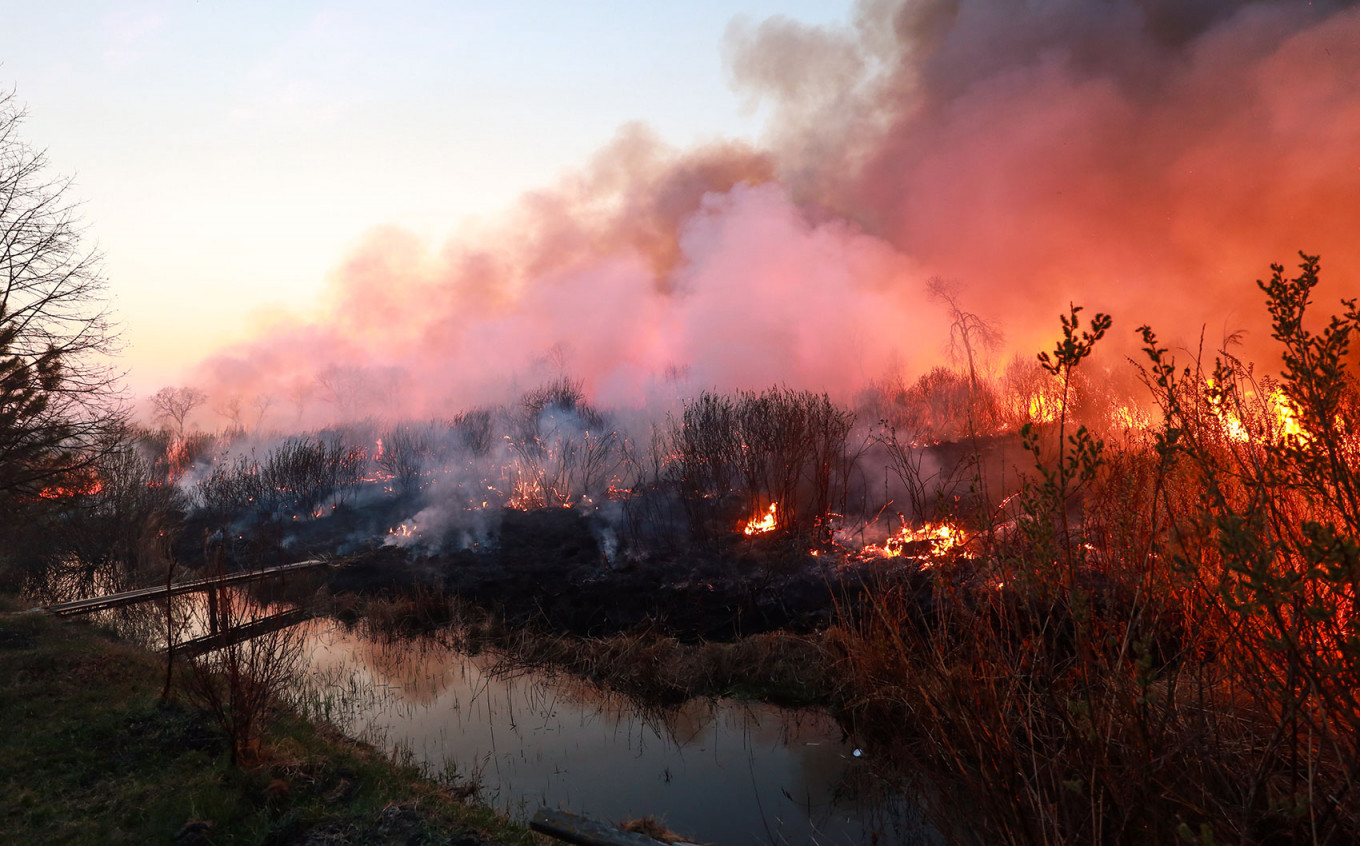 A wildfire covering an area of 20 hectares rages near the Yakor [Anchor] dacha community in the Tyumen region.
Maxim Slutsky / TASS 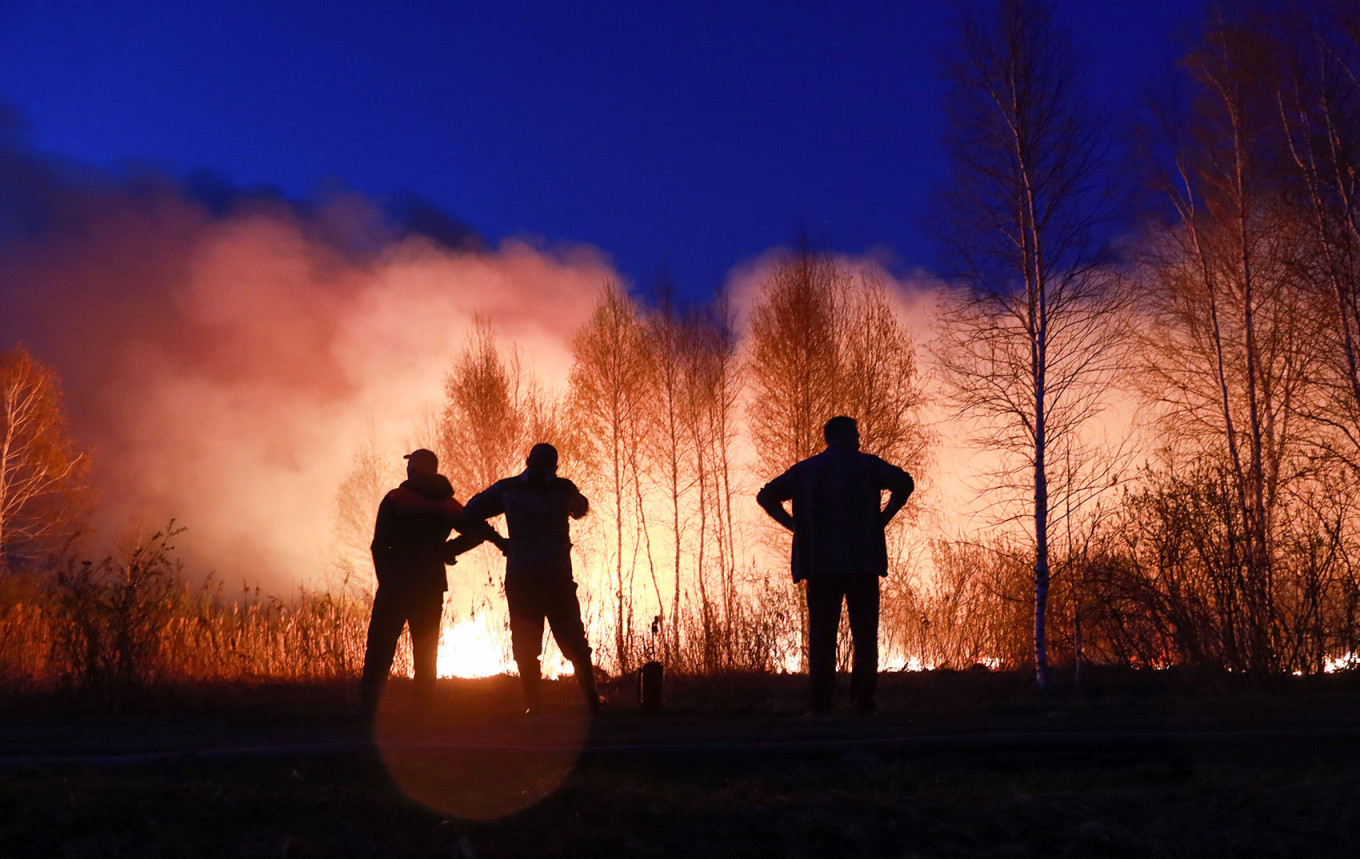 Local firefighting forces are typically made up of civilian volunteers and have faced dwindling resources in recent years.
Maxim Slutsky / TASS 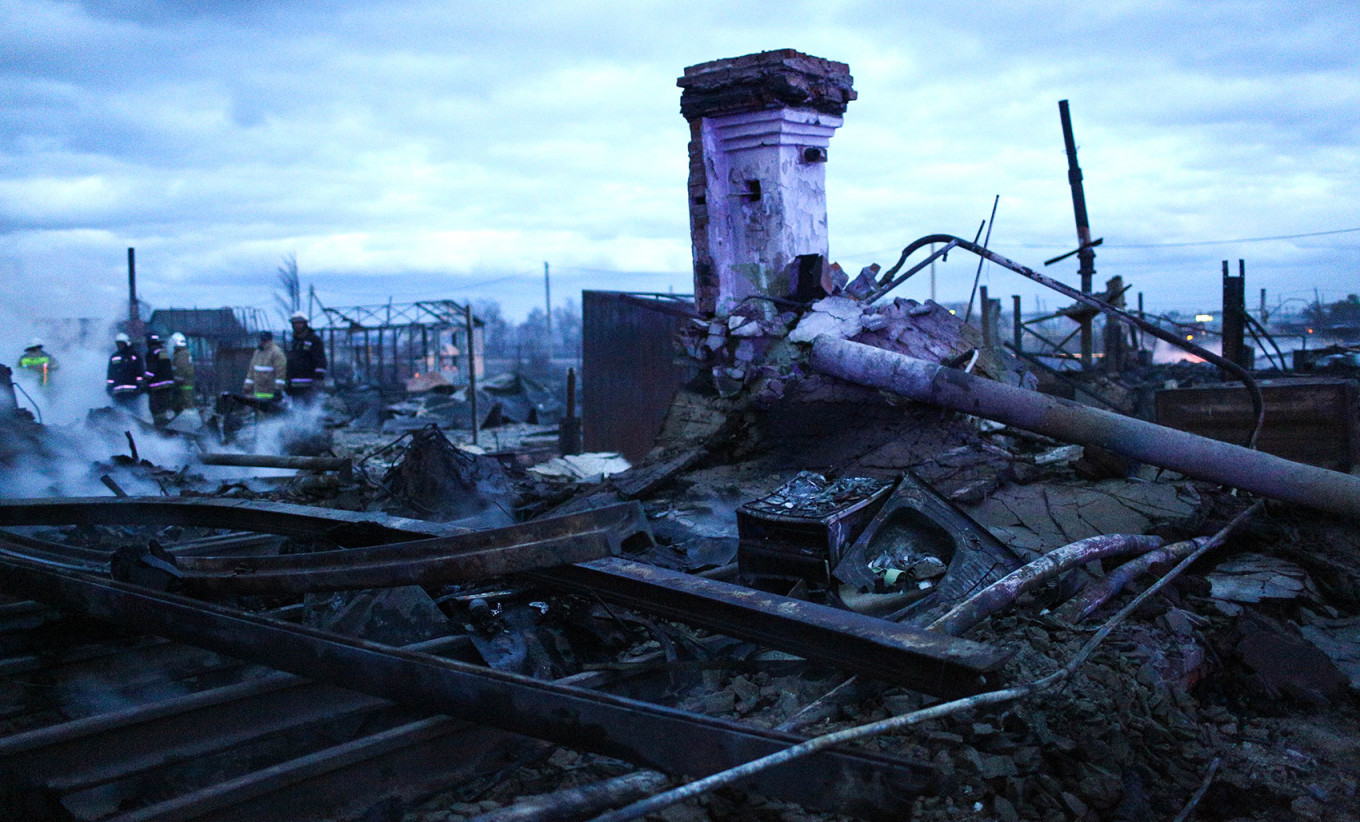 Firefighters at the scene of a fire in the Omsk region town of Nazyvayevsk in southern Siberia. The fire damaged 29 residential houses and 23 non-residential buildings. Some 165 people, 23 pieces of equipment and a fire-fighting train were involved in the firefighting effort. The Omsk region has declared a state of emergency over the fires.
Yevgeny Sofiychuk / TASS 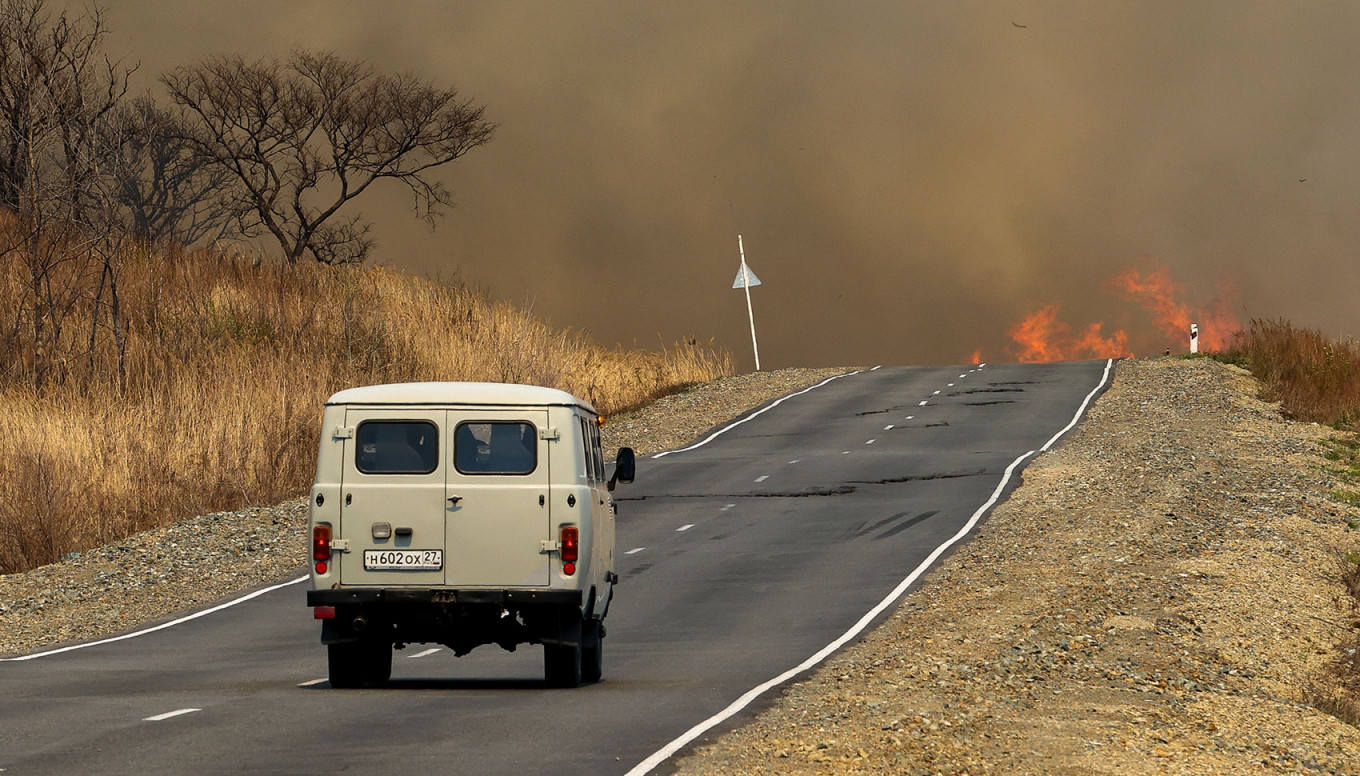 A road is wrapped in smoke from a wildfire on the border of the Khasansky district and Nadezhdinsky district of the Primorye region in the Russian Far East.
Yuri Smityuk / TASS 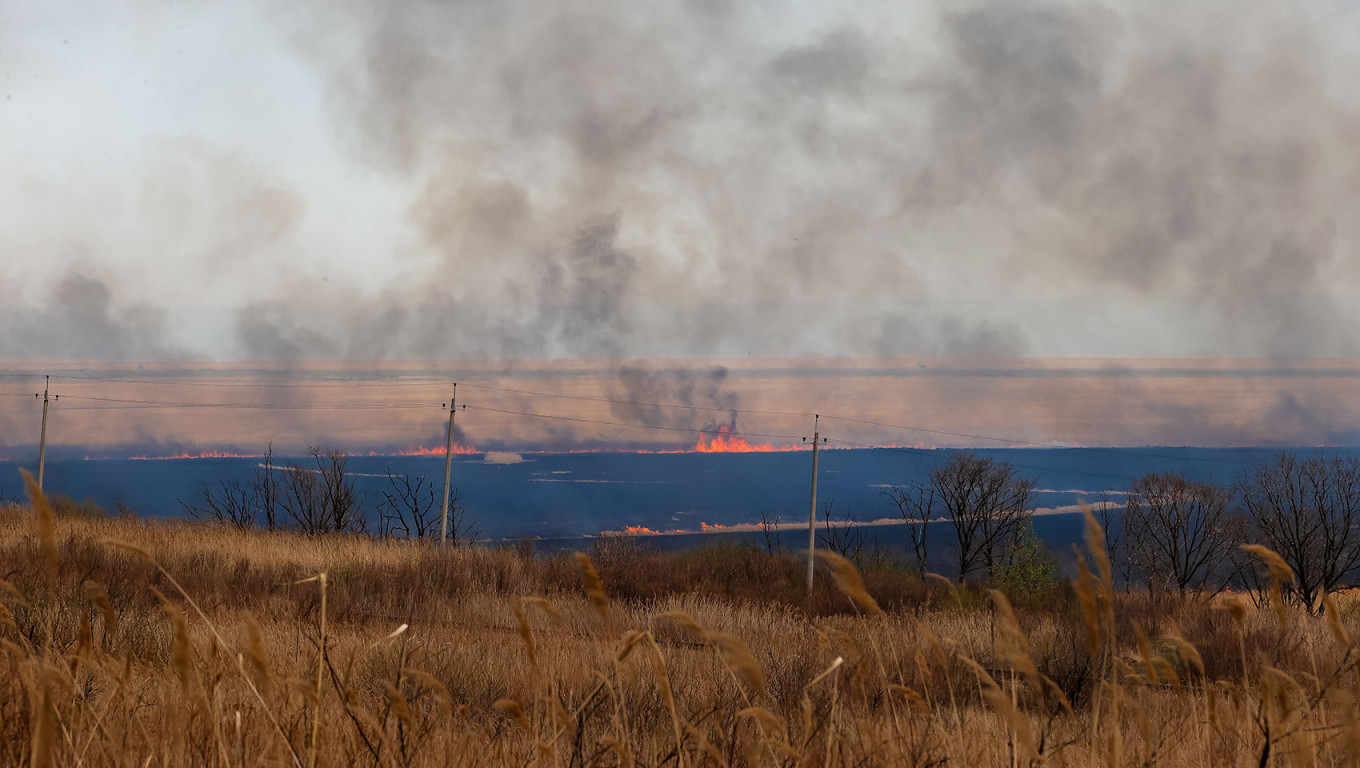 Western analysts have said that Russia may have sent much of its military aircraft used for tracking wildfires to Ukraine, where Moscow is waging a military campaign.
Yuri Smityuk / TASS 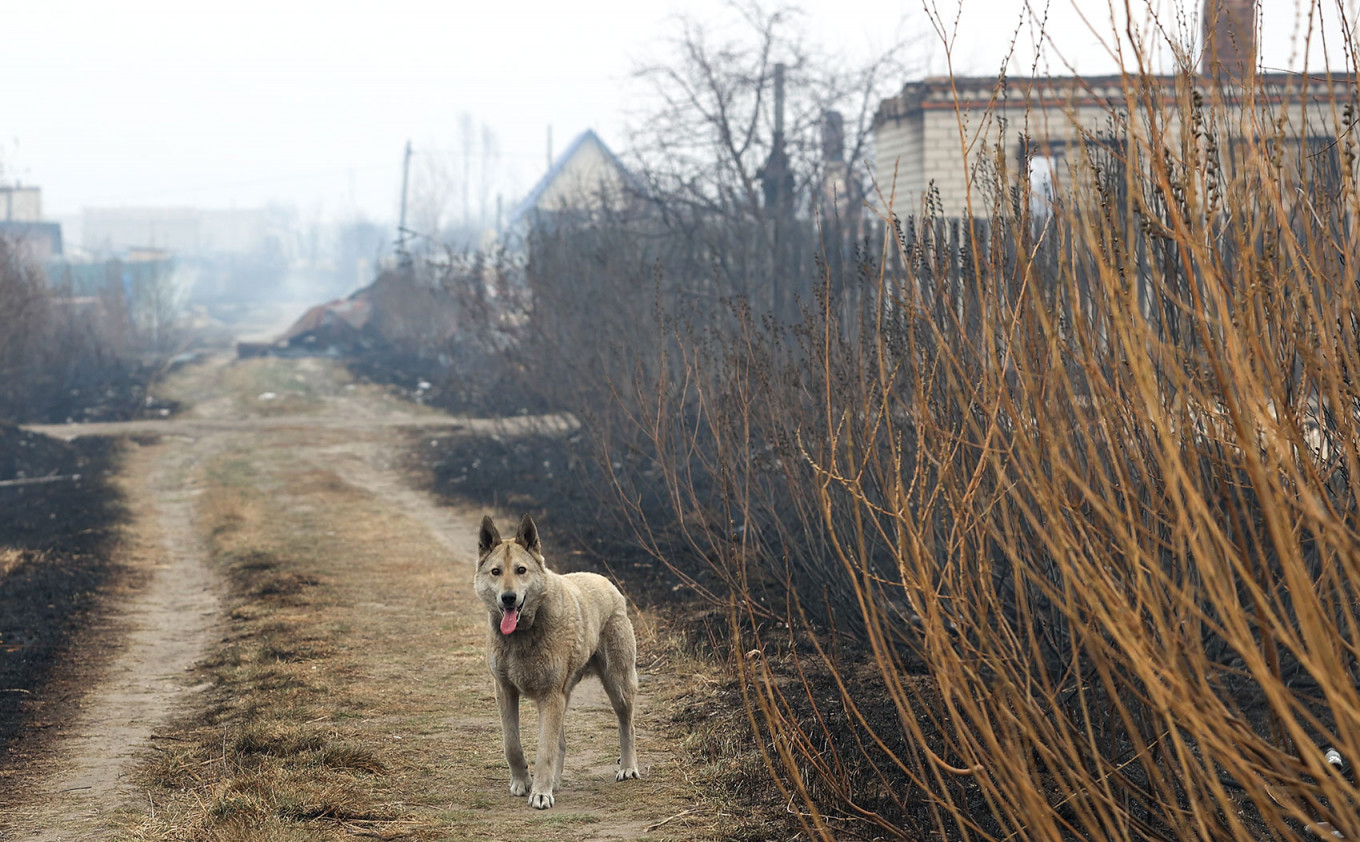 A dog is seen in the Malinovka dacha community in the Kurgan region following a wildfire.
Donat Sorokin / TASS 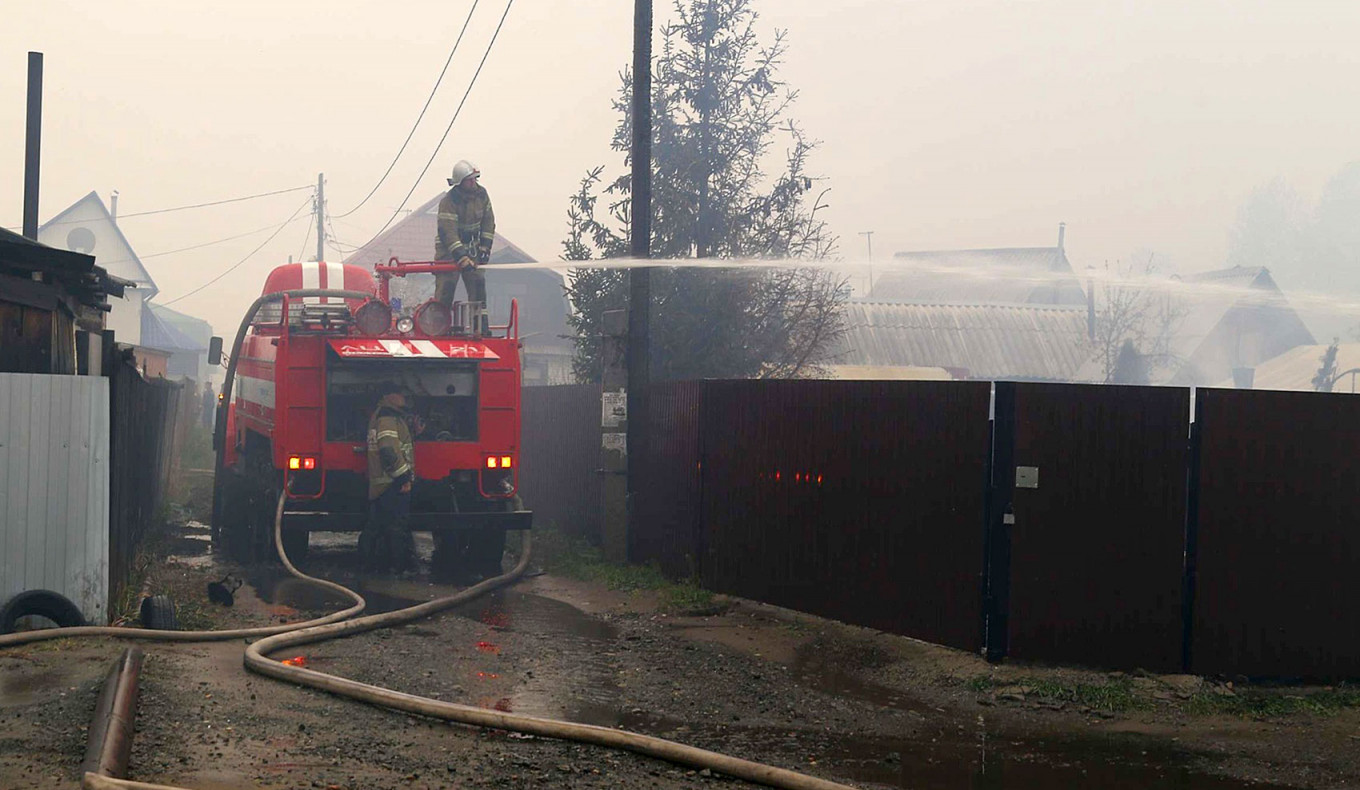 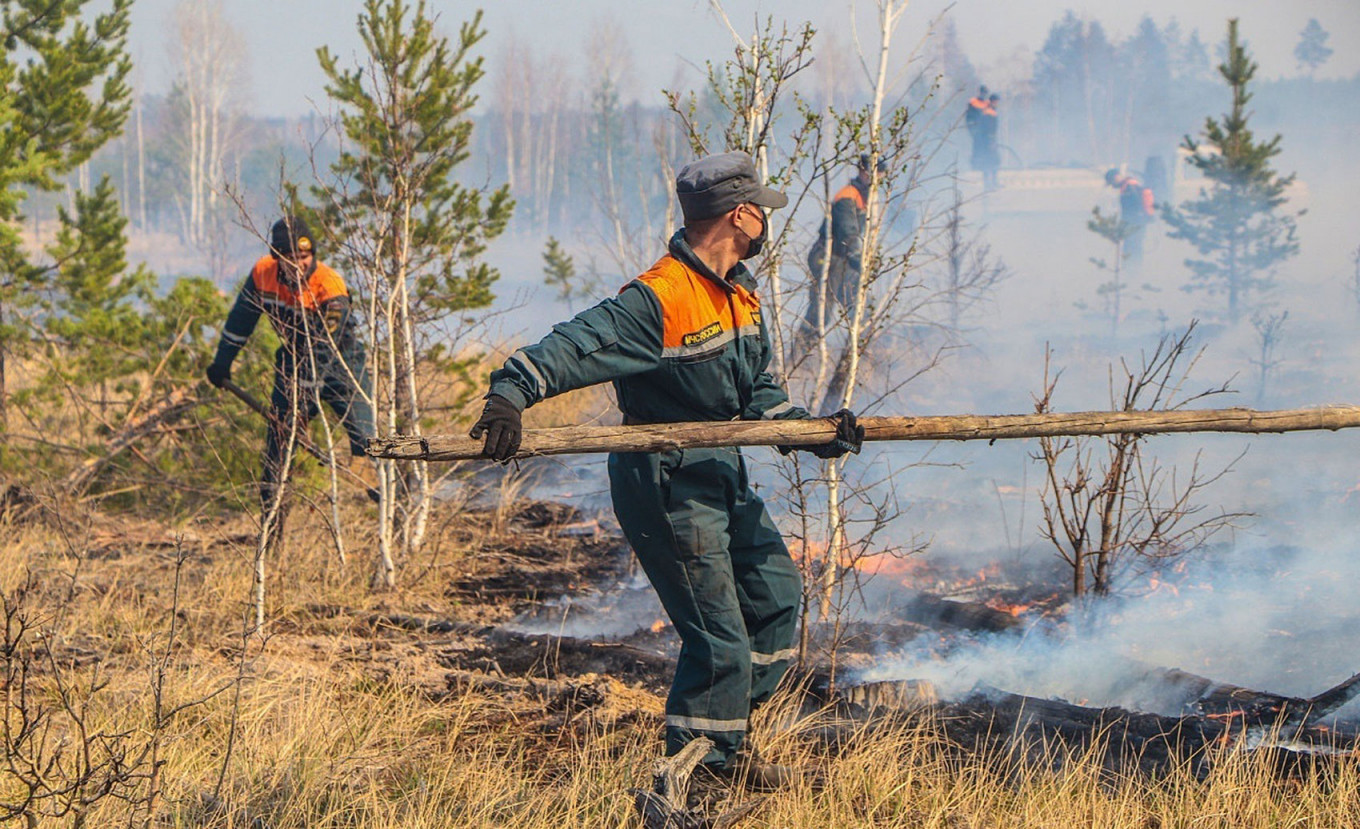 Russia plans to use its vast forests as part of a carbon-capture program, allowing it to reduce its carbon emissions to meet global climate goals while still increasing its fossil fuel production.
Russian Emergencies Ministry 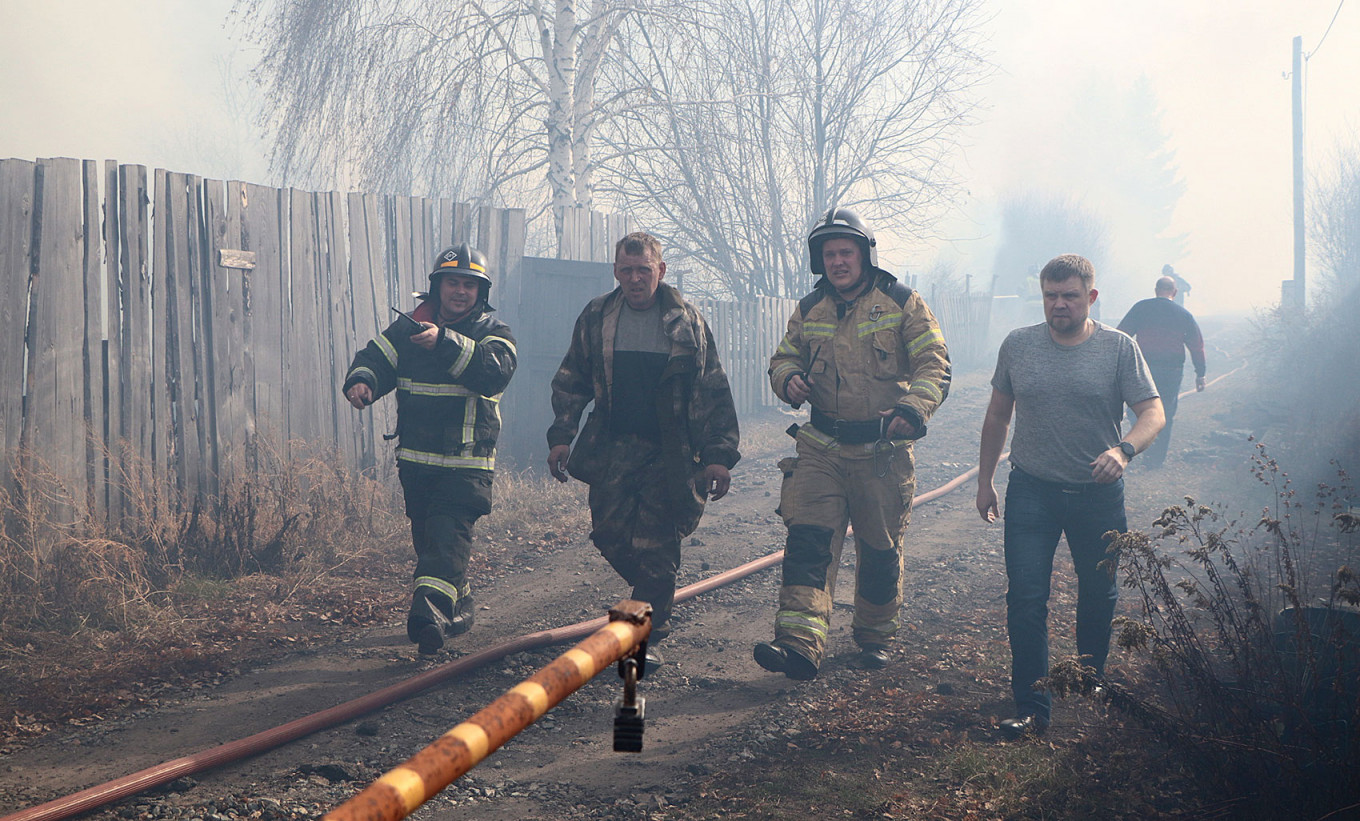 Critics say Russia's climate strategy is not ambitious enough as it uses its emissions following the Soviet collapse, when industrial activity slowed to a halt, as a baseline.
Russian Emergencies Ministry
Read more about: Environment , Siberia