Contribute Today
Apr 14, 2022 - 10:43 am
In the early hours of Feb. 24, Russian President Vladimir Putin announced the beginning of a what he called a "special military operation" in Ukraine.

In the 50 days since, Russia's military incursion — which the Kremlin denies is an invasion — has killed tens of thousands, displaced millions and turned once-peaceful cities into war zones.

Here is a look back at the first 50 days of the war in Ukraine: 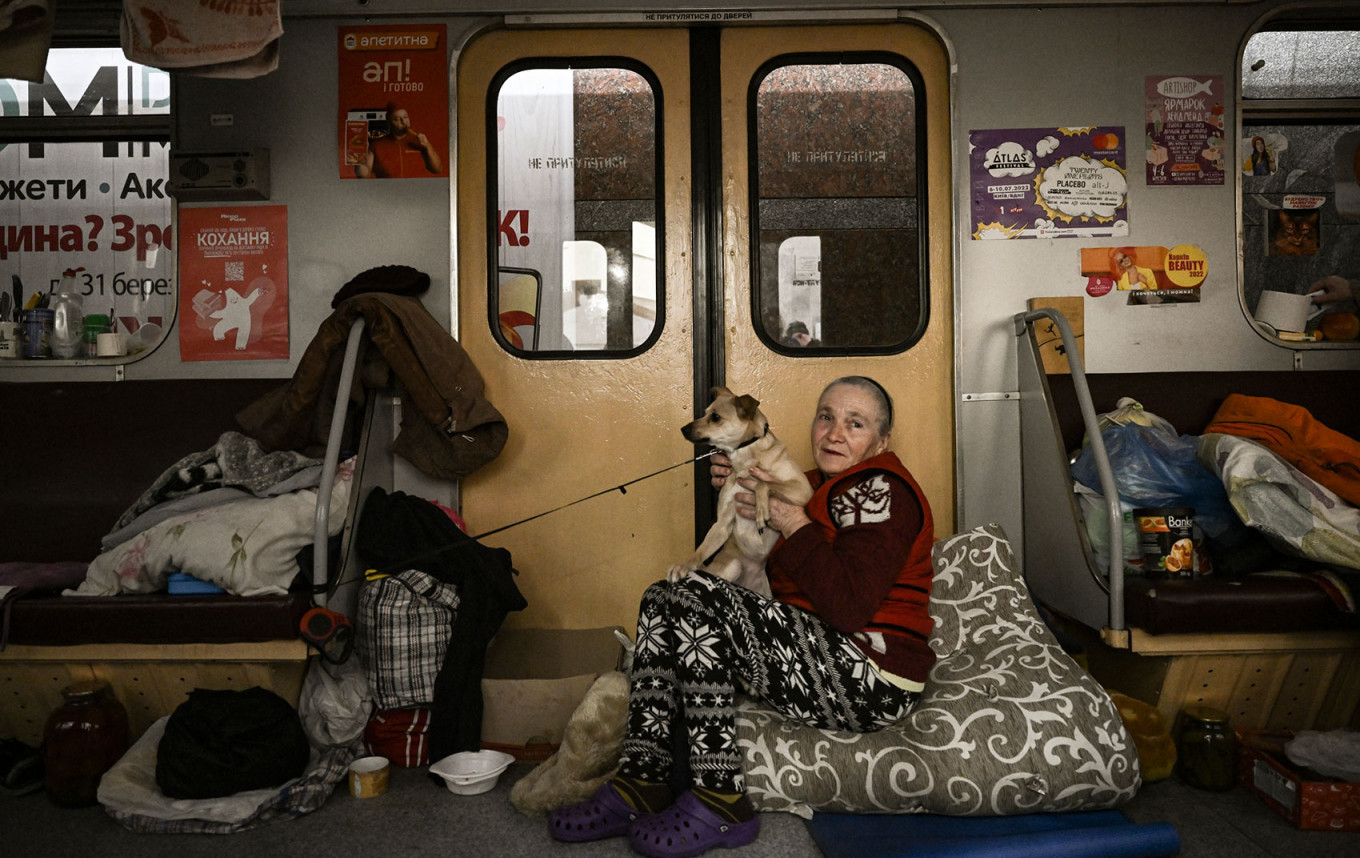 A woman holds a dog in a train at a metro station used as a bomb shelter in Kharkiv.

As Ukrainian citizens have been forced to take shelter or flee the country, most people are bringing their cats and dogs along with them.
Aris Messinis / AFP 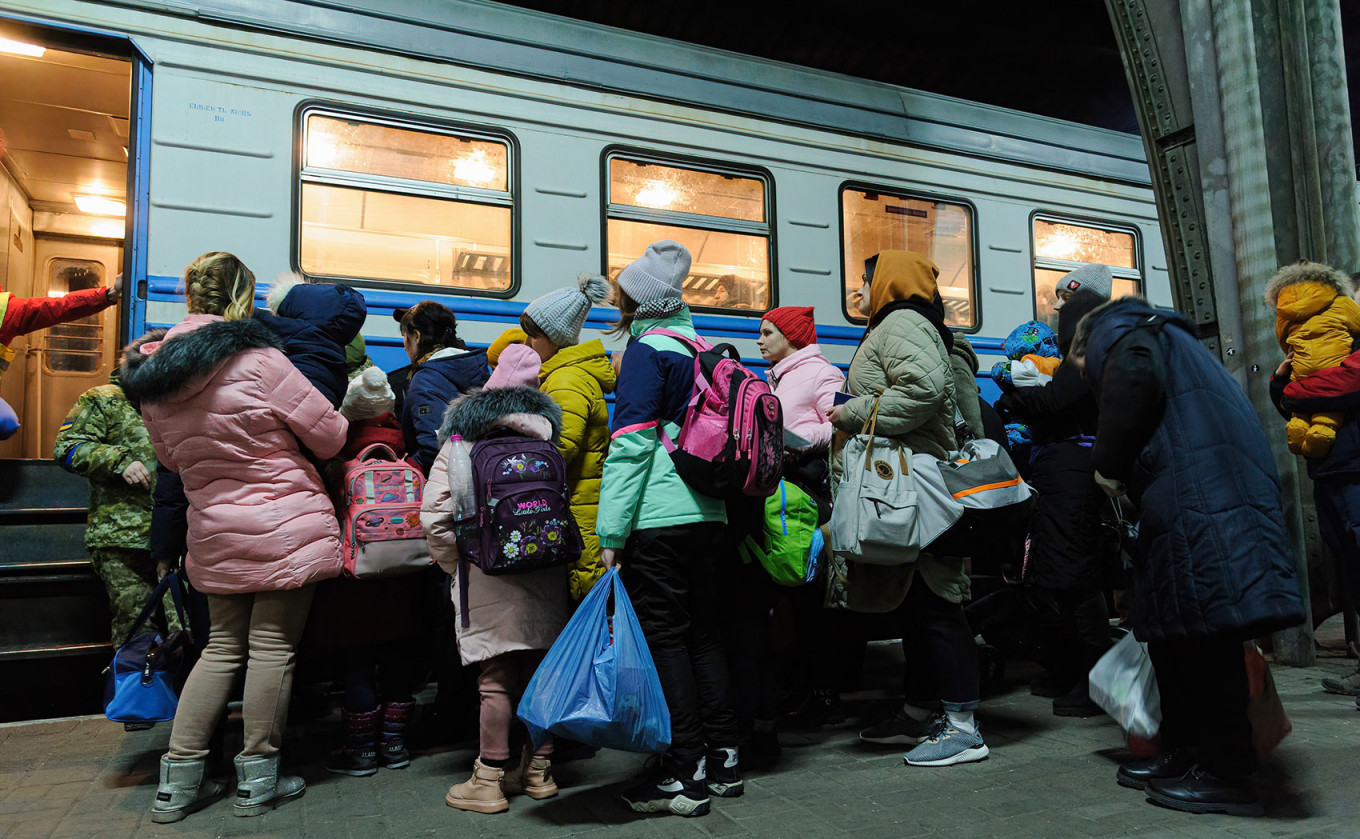 Civilians flee from Ukraine to Poland at Lviv railway station.

More than 2.5 million Ukrainian refugees have fled to Poland since the war began.
Zuma / TASS 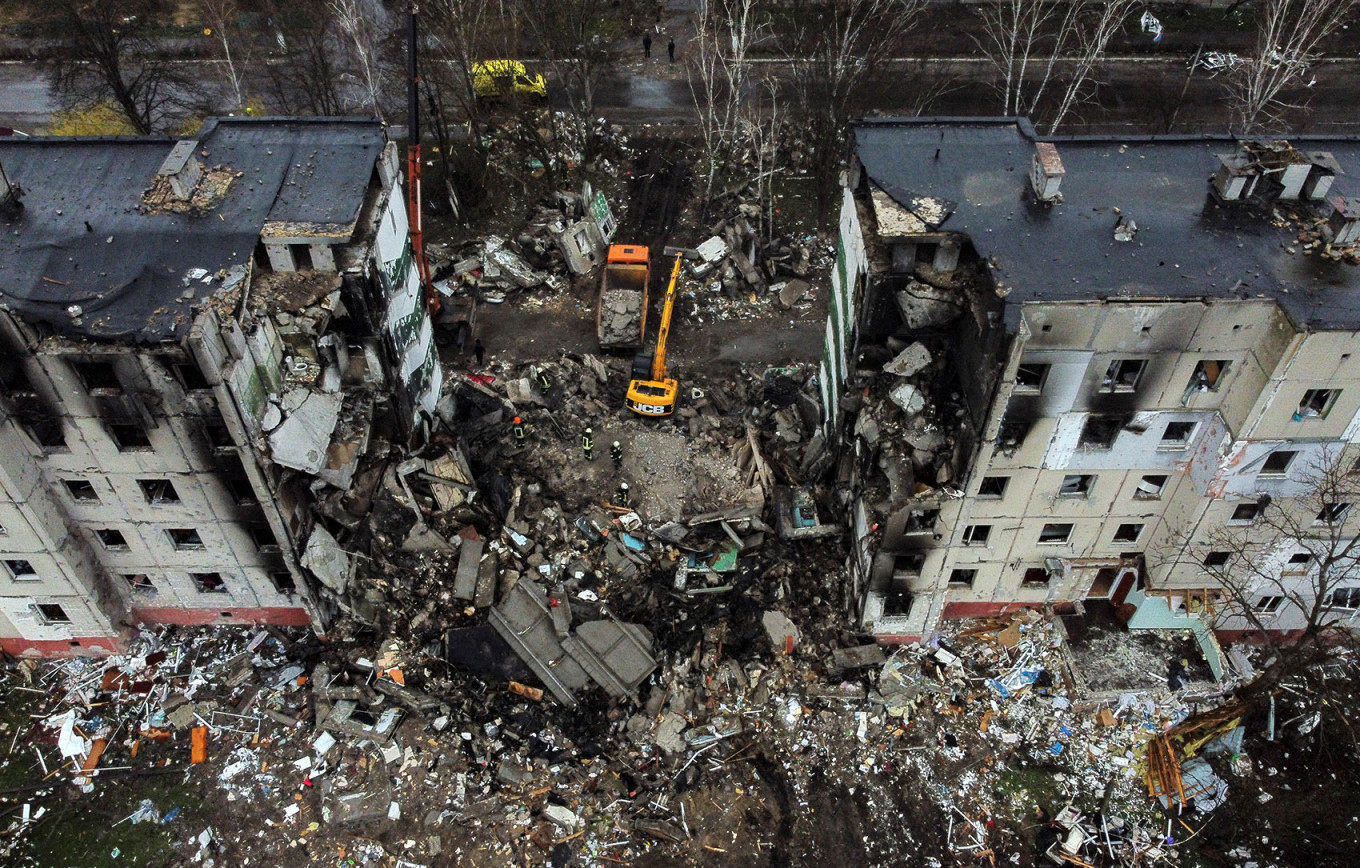 Diggers working in the rubble of collapsed buildings in the town of Borodyanka, northwest of Kyiv.

In the early weeks of the war, Russian forces moved toward the Ukrainian capital Kyiv but were met with fierce resistance.
Ronaldo Schemidt / AFP 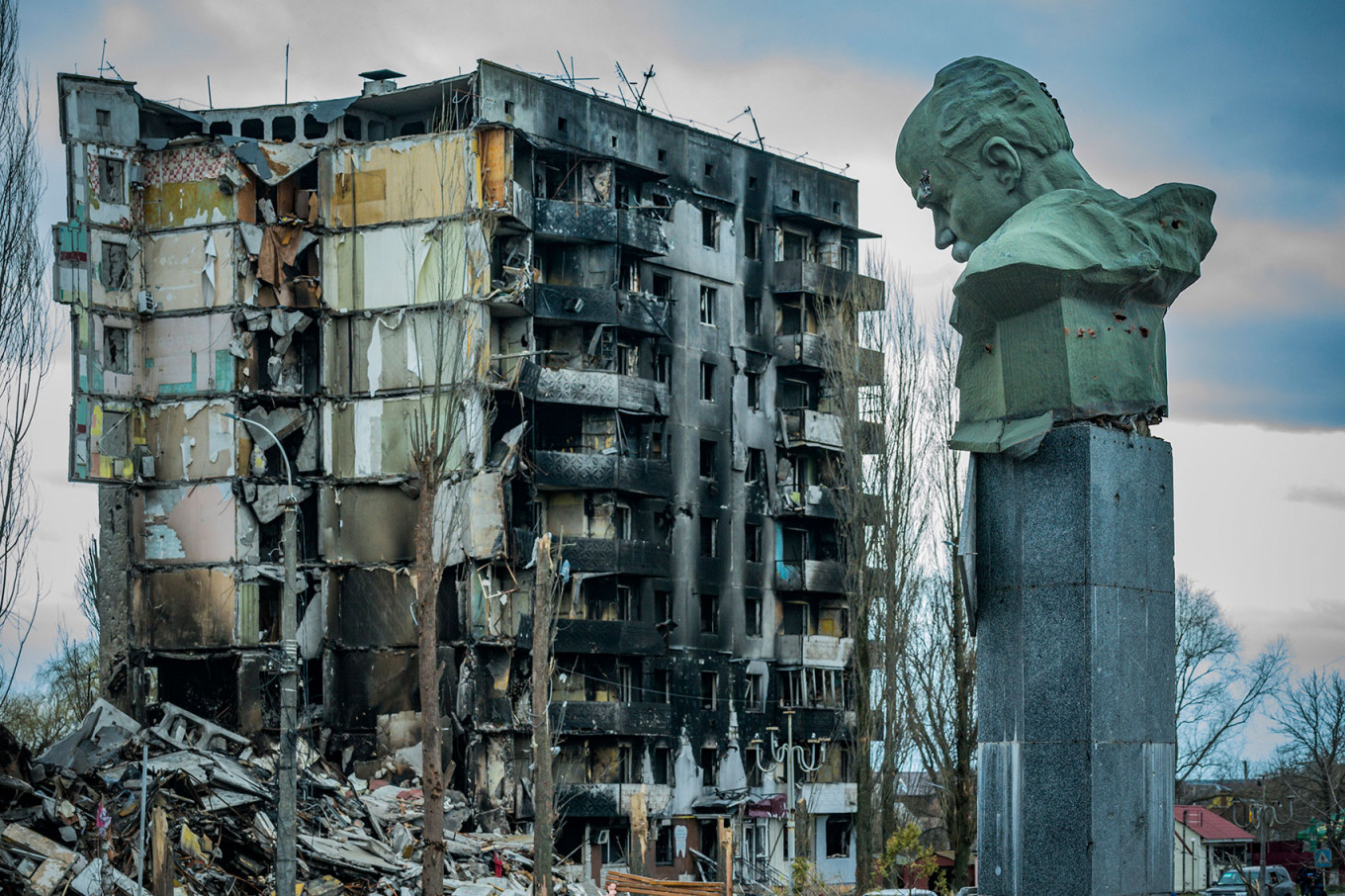 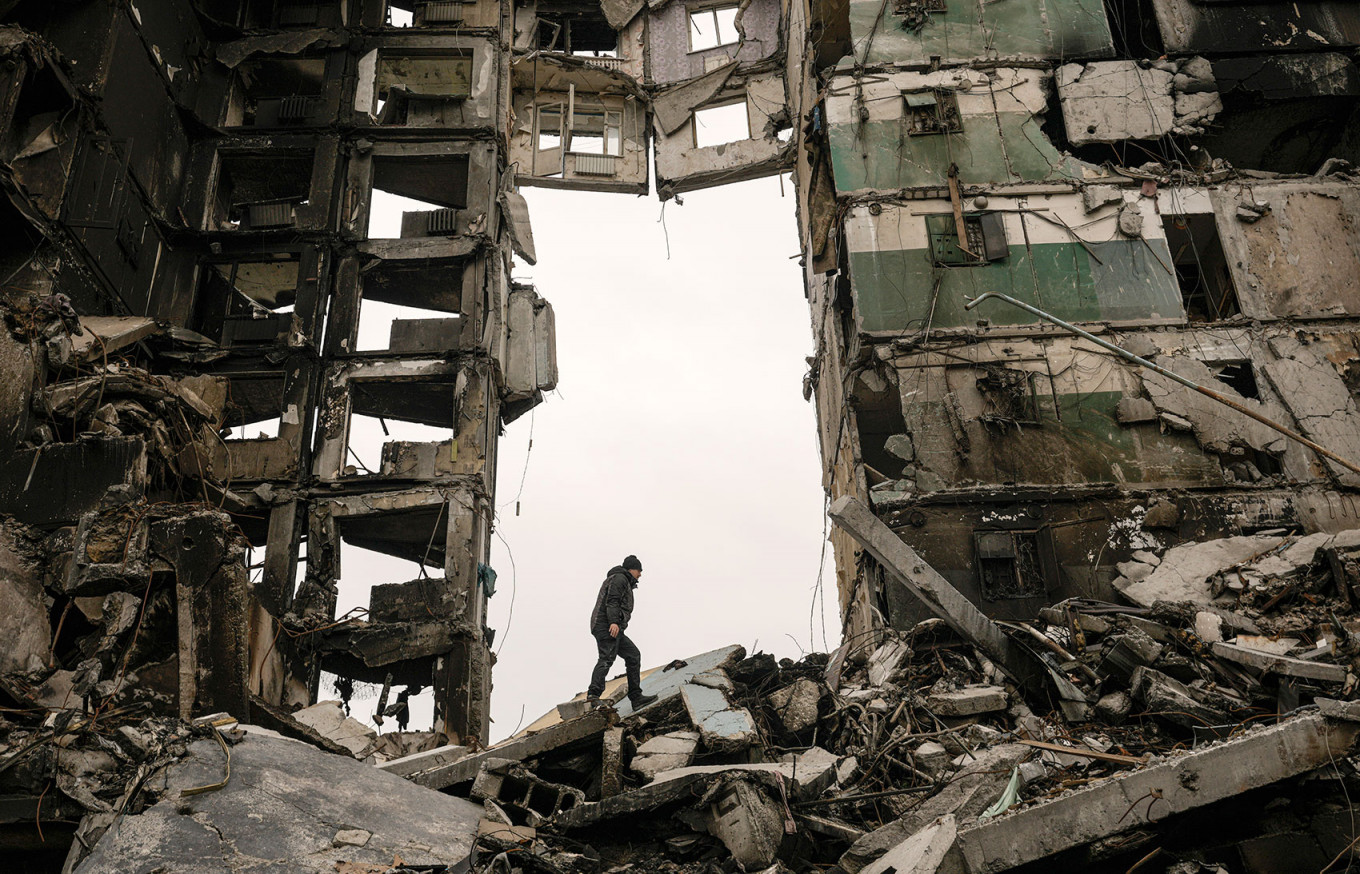 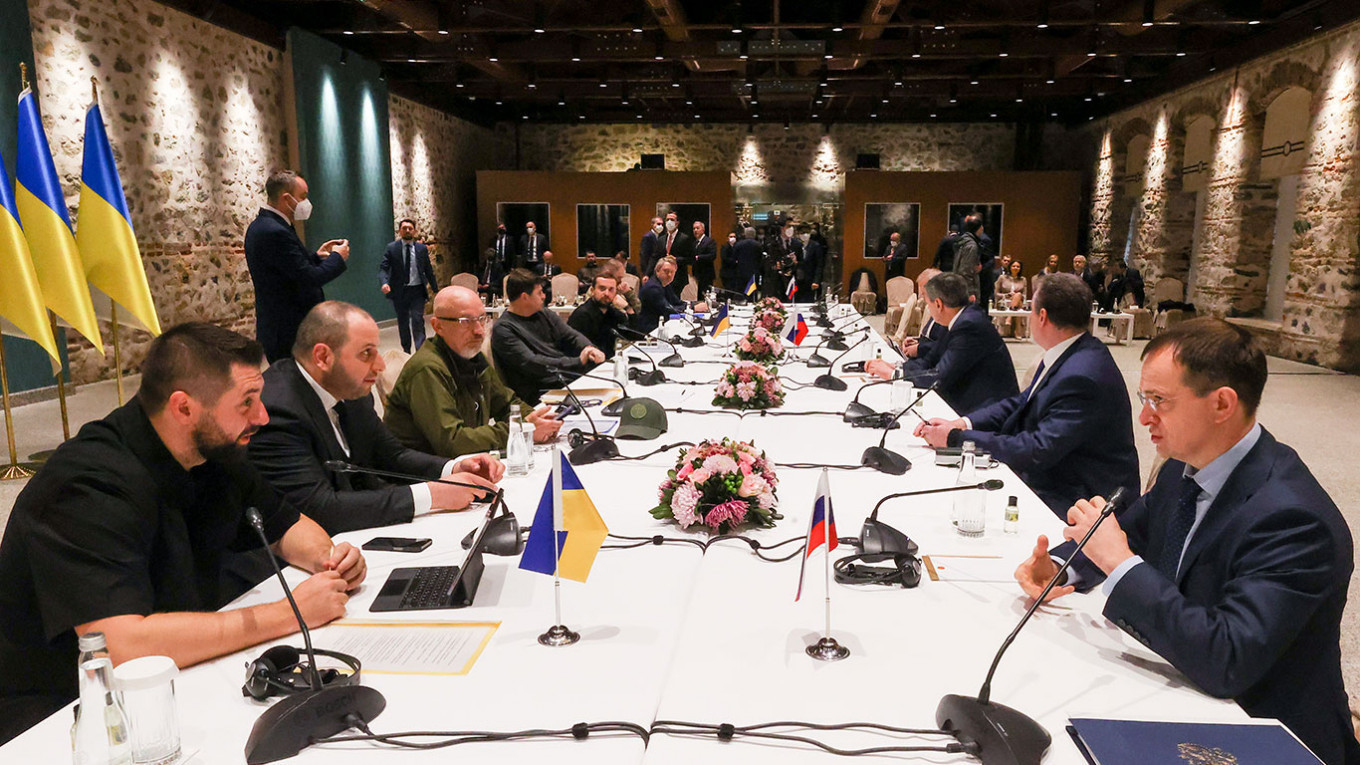 David Arakhamia (L), Servant of the People Party faction leader at the Ukrainian Verkhovna Rada, and Russia's Presidential Aide Vladimir Medinsky (R) hold a round of Russian-Ukrainian talks at the Dolmabahce Palace in Istanbul on March 29. 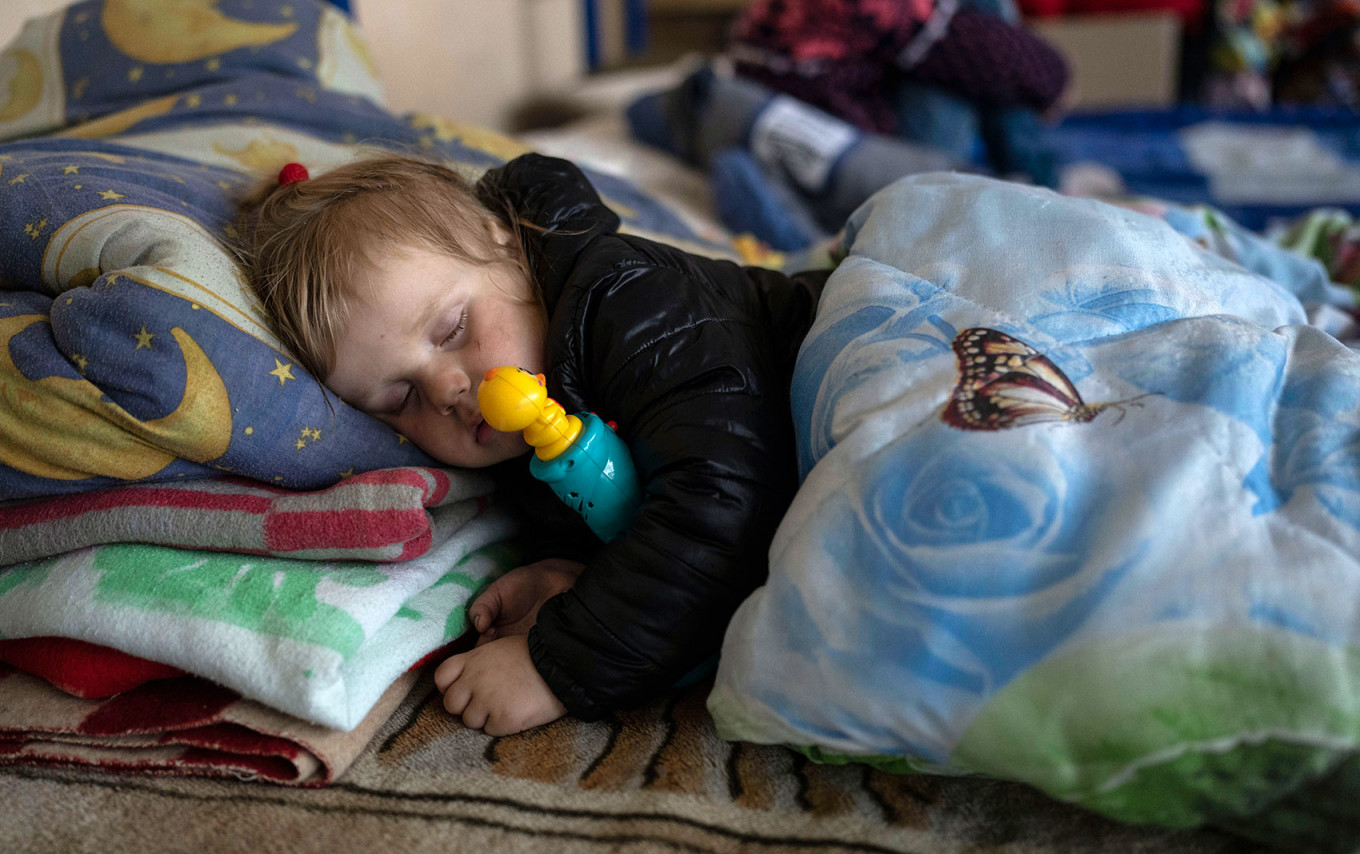 Carolina Fedorova, 3, sleeps inside a school that is being used as a shelter for people who fled the war in the city of Dnipro, Ukraine.

Carolina fled with her parents and four siblings from the eastern city of Bakhmut.
Petros Giannakouris / AP / TASS 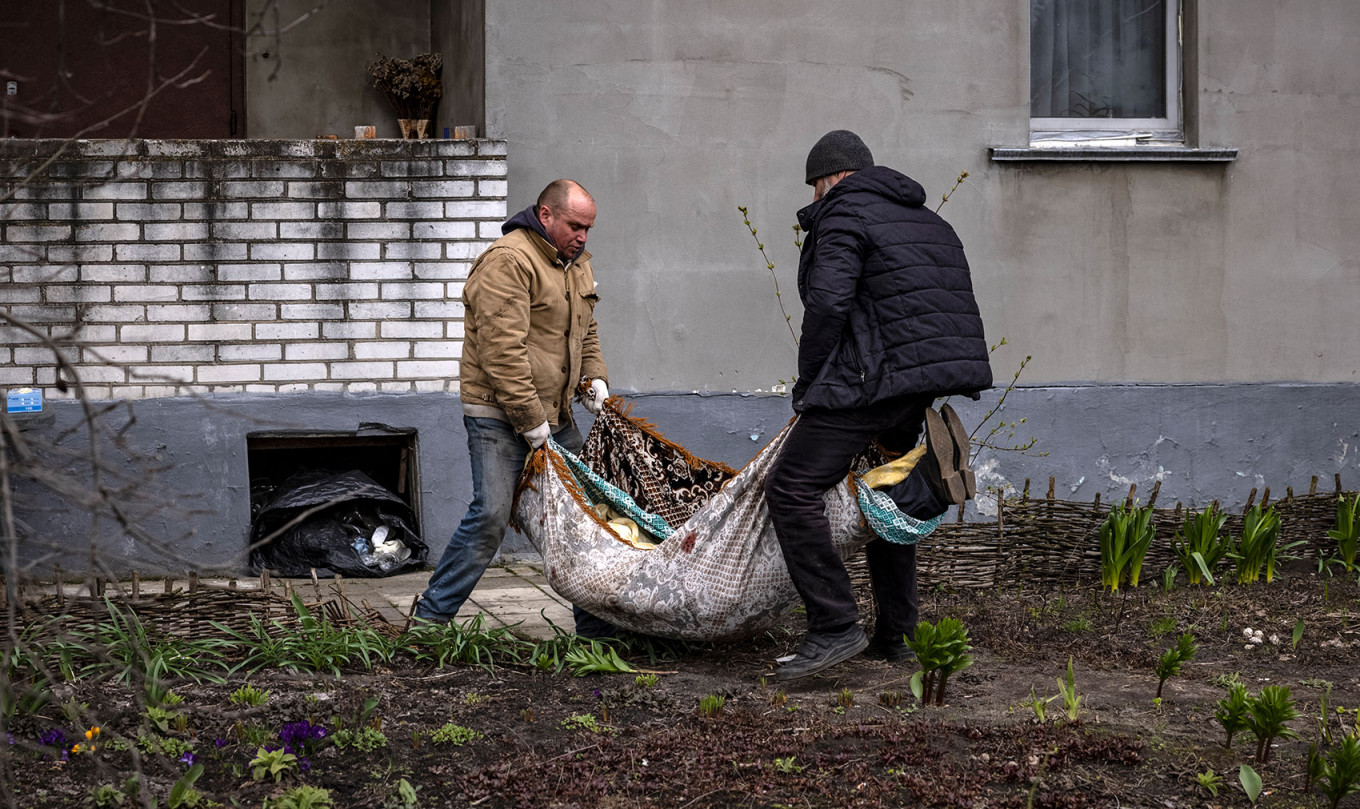 Communal workers carry in a rug the body of a man buried in his yard in the town of Gostomel, Kyiv region.
Fadel Senna / AFP

An aerial view of the city of Mariupol on April 12.

Mariupol, a strategic port city on the Sea of Azov, has been under Russian siege for weeks, with reports of civilians lacking access to food, water and medicines. 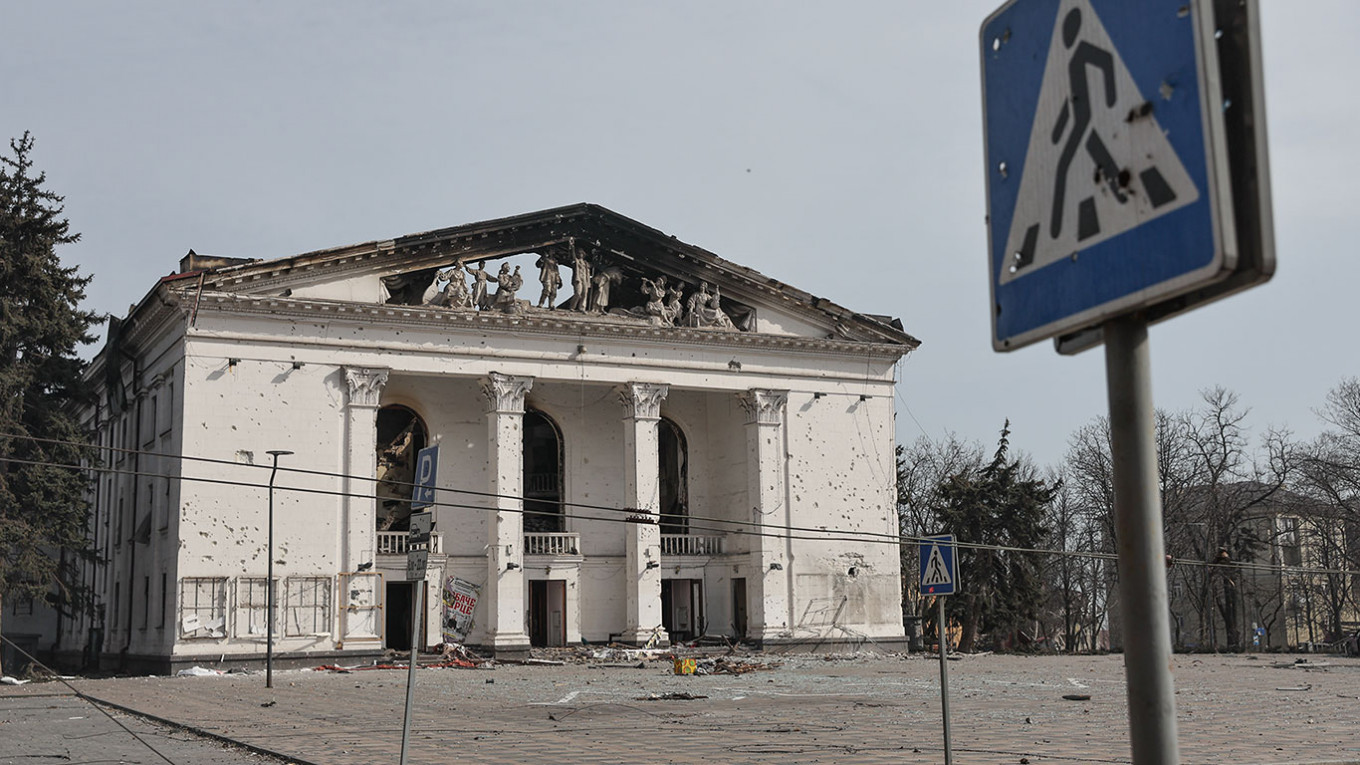 The Mariupol drama theater was struck by shelling on March 16 as civilians, including children, were sheltering inside.

Kyiv accused Moscow of war crimes with the strike, while the Russian military blamed Ukrainian far-right militias for the attack.
Sergei Bobylev / TASS 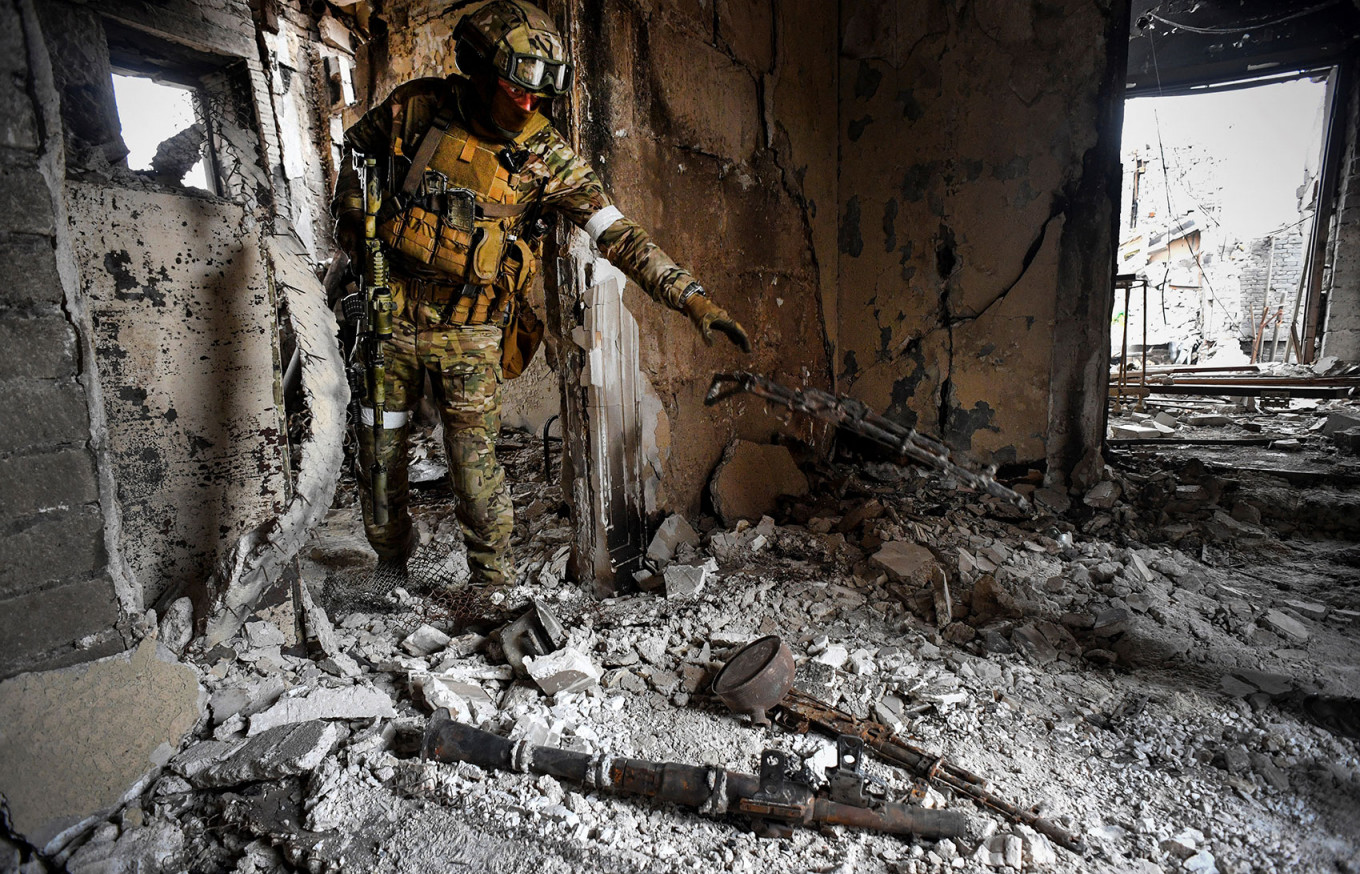 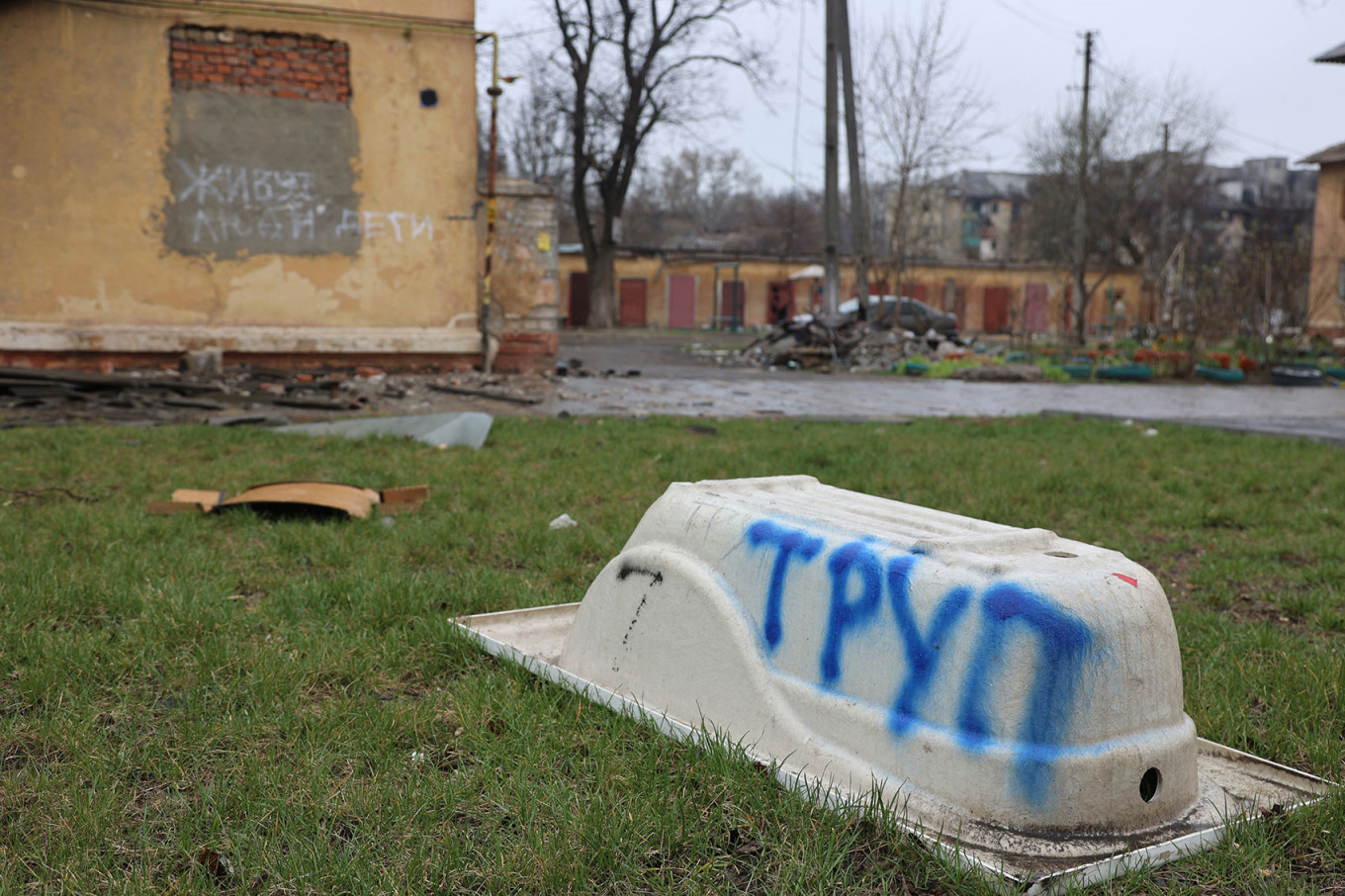 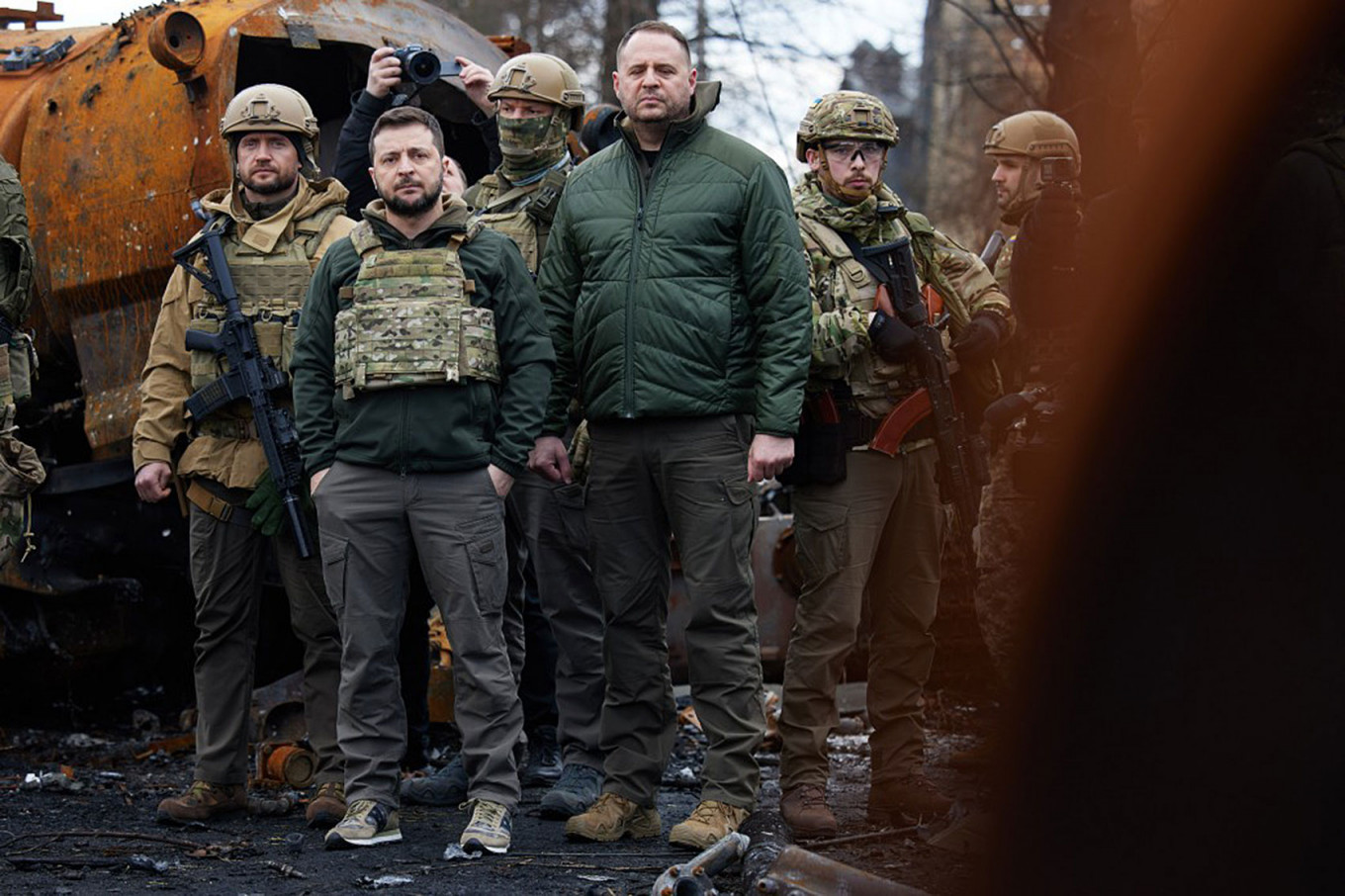 Zelensky accused Russia of carrying out "war crimes" and "genocide" in Bucha. 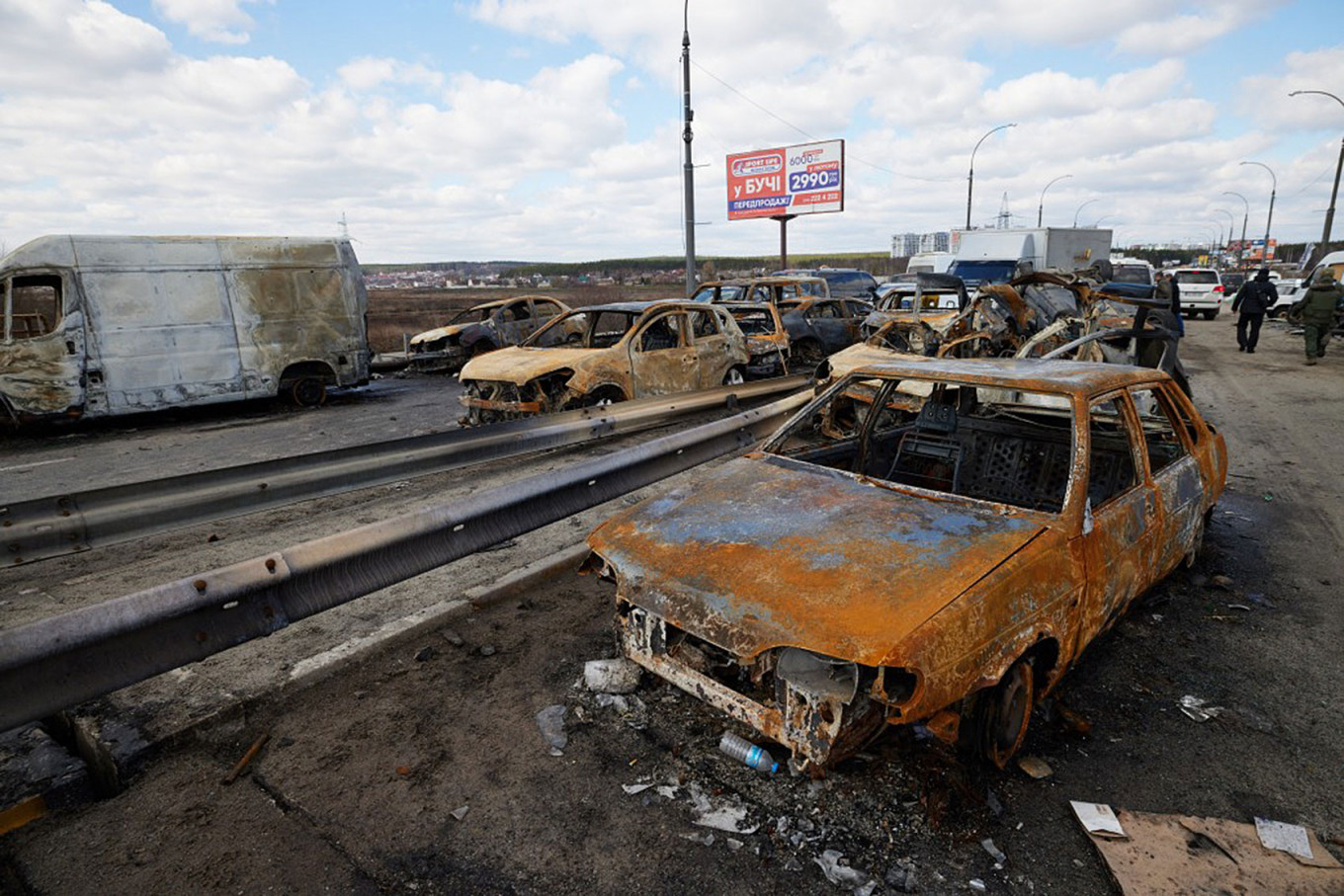 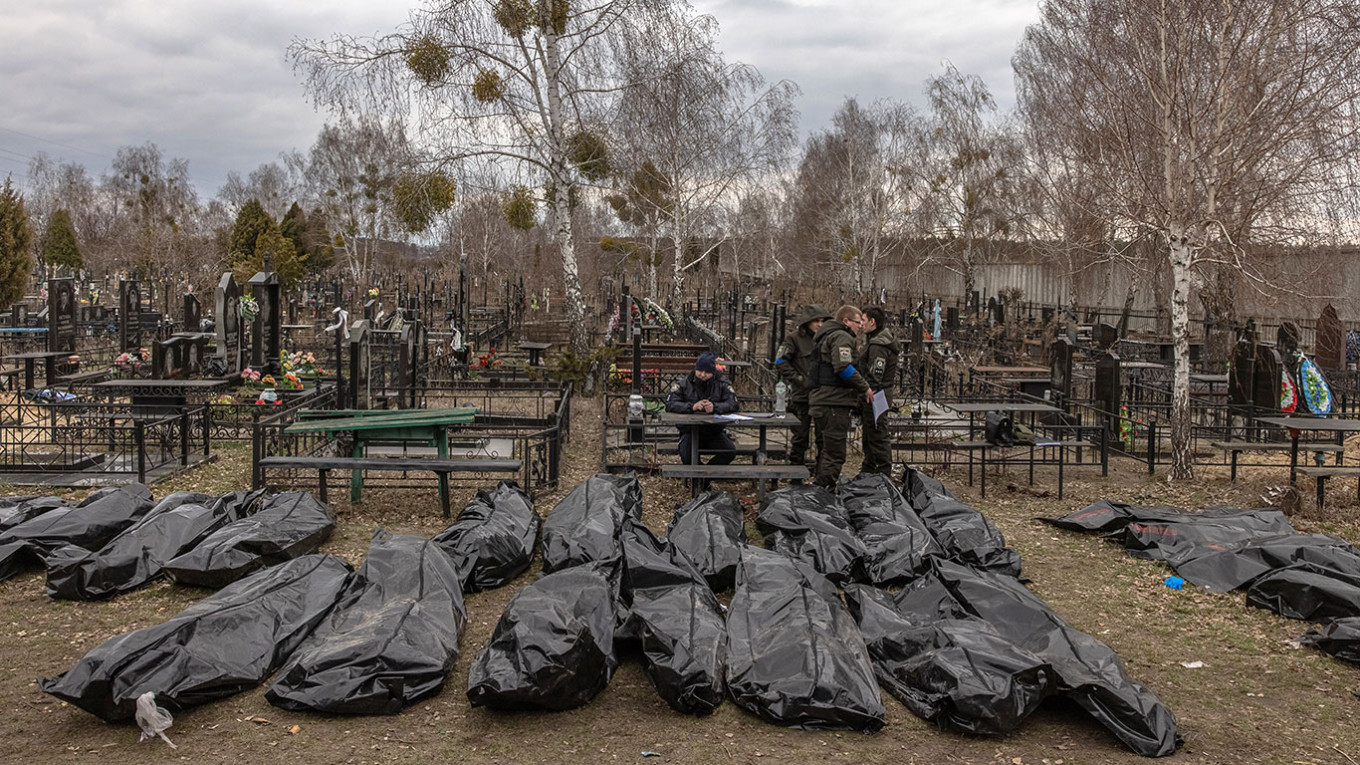 Bodies being exhumed from a mass grave in Bucha.
Roman Pilipey / EPA / TASS 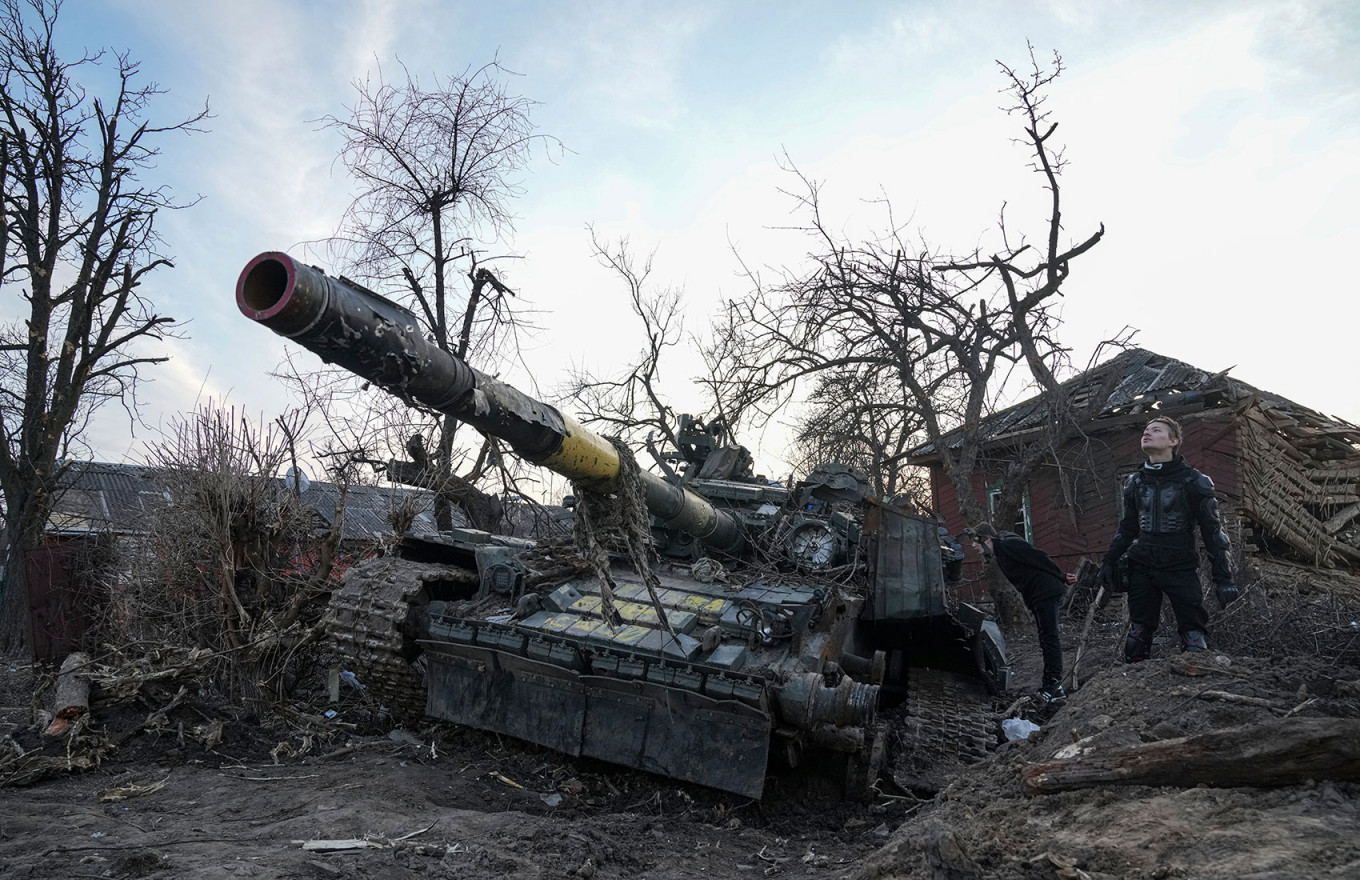 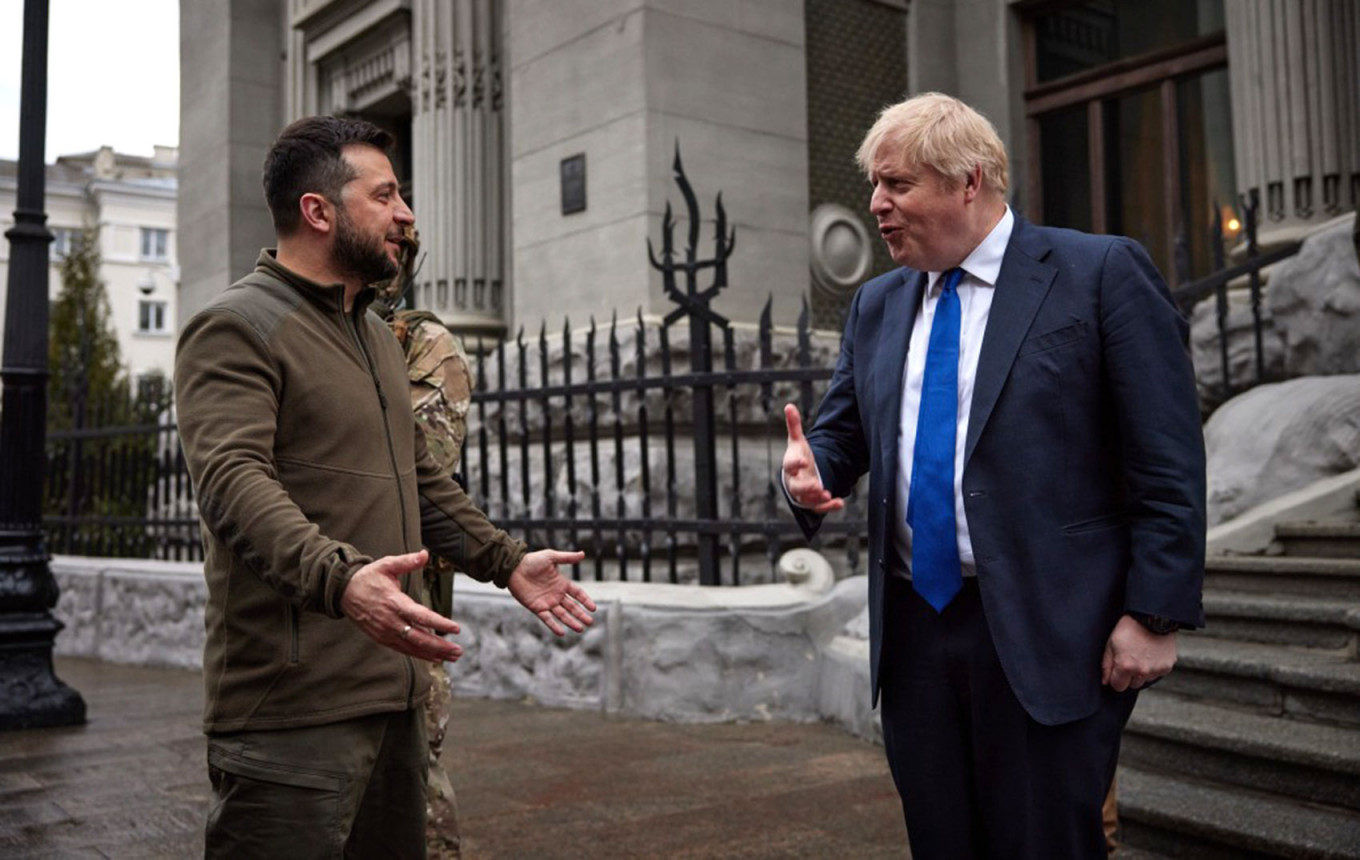 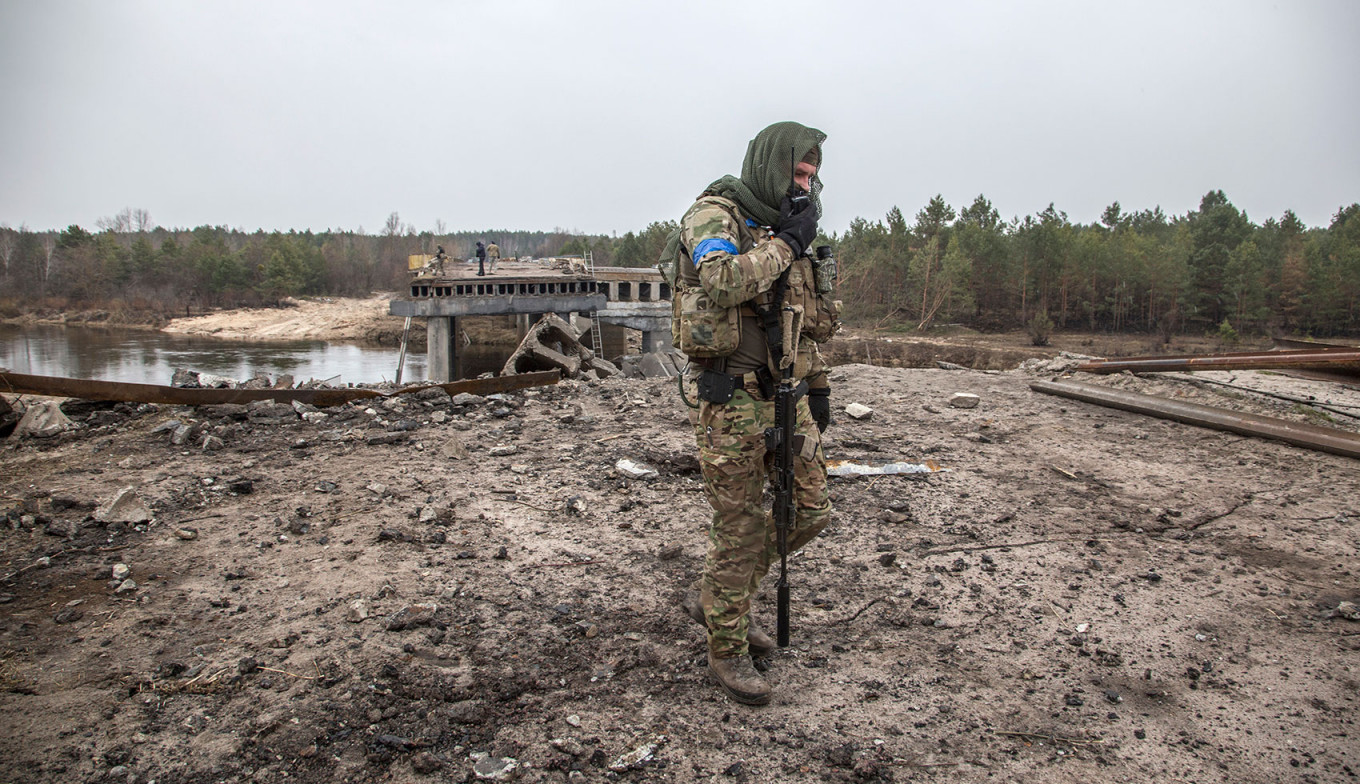 A Ukrainian serviceman walks on a destroyed bridge between the village of Dytiatky and Chernobyl. 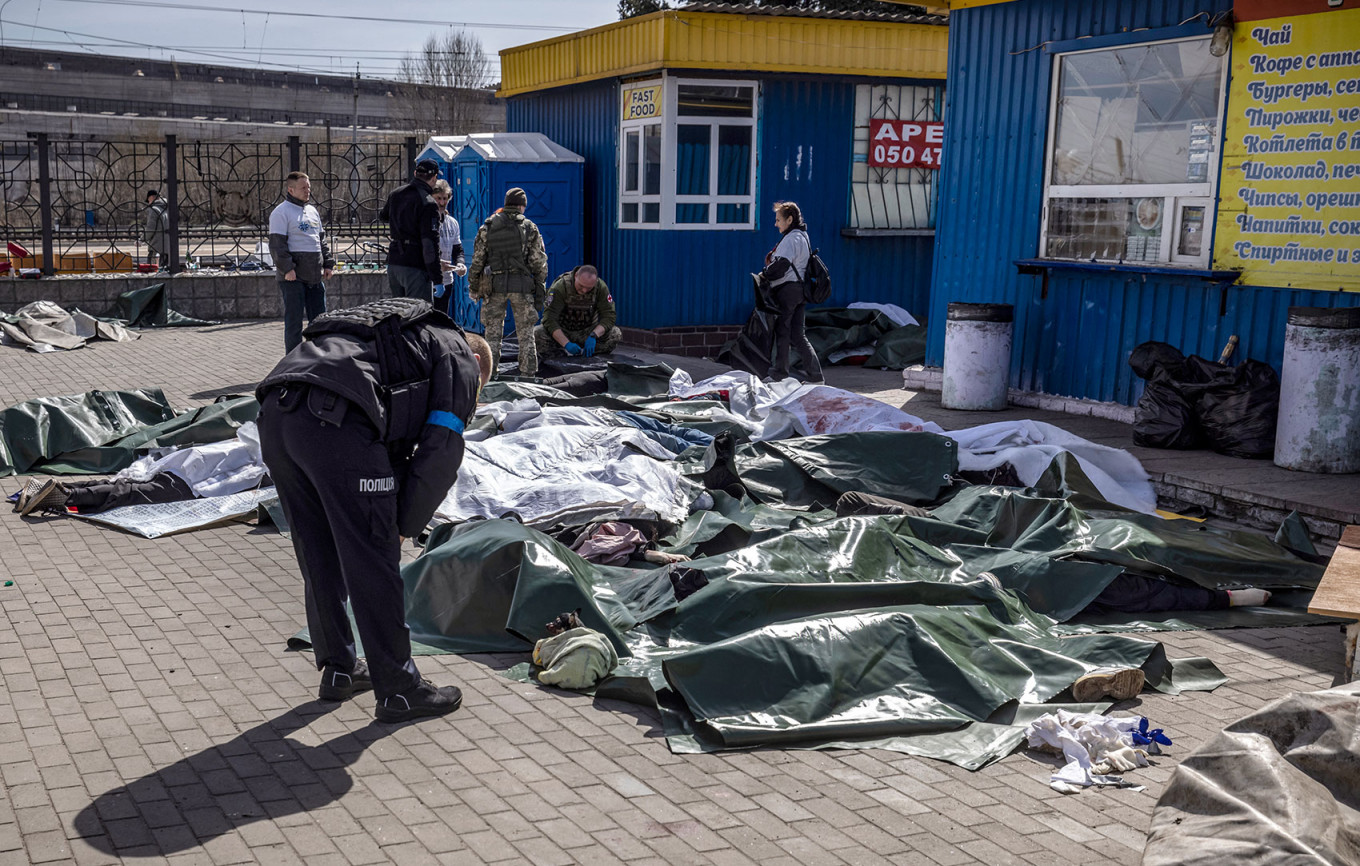 A Ukrainian policeman bends over bodies laid on the ground and covered with tarps after a rocket attack.
Fadel Senna / AFP 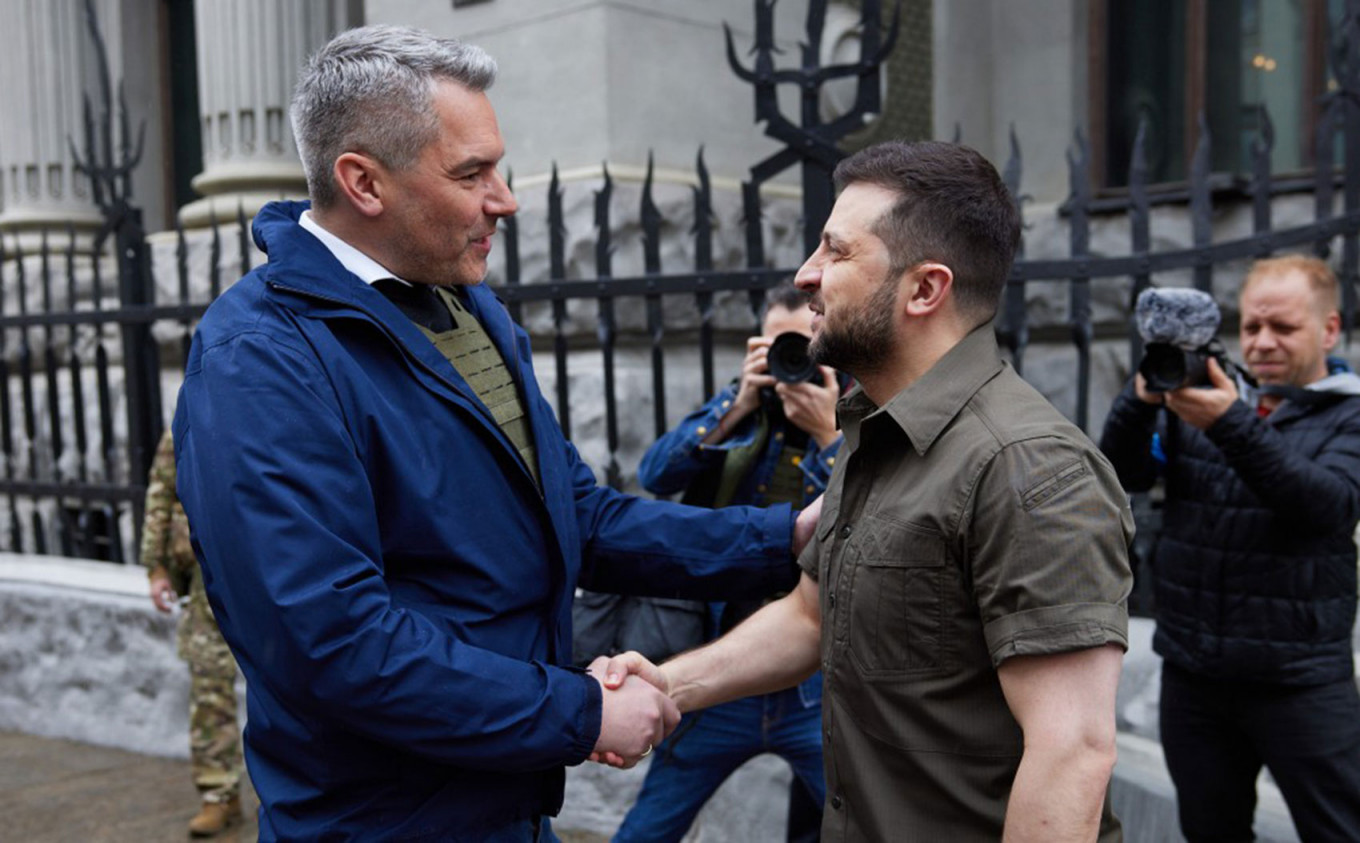 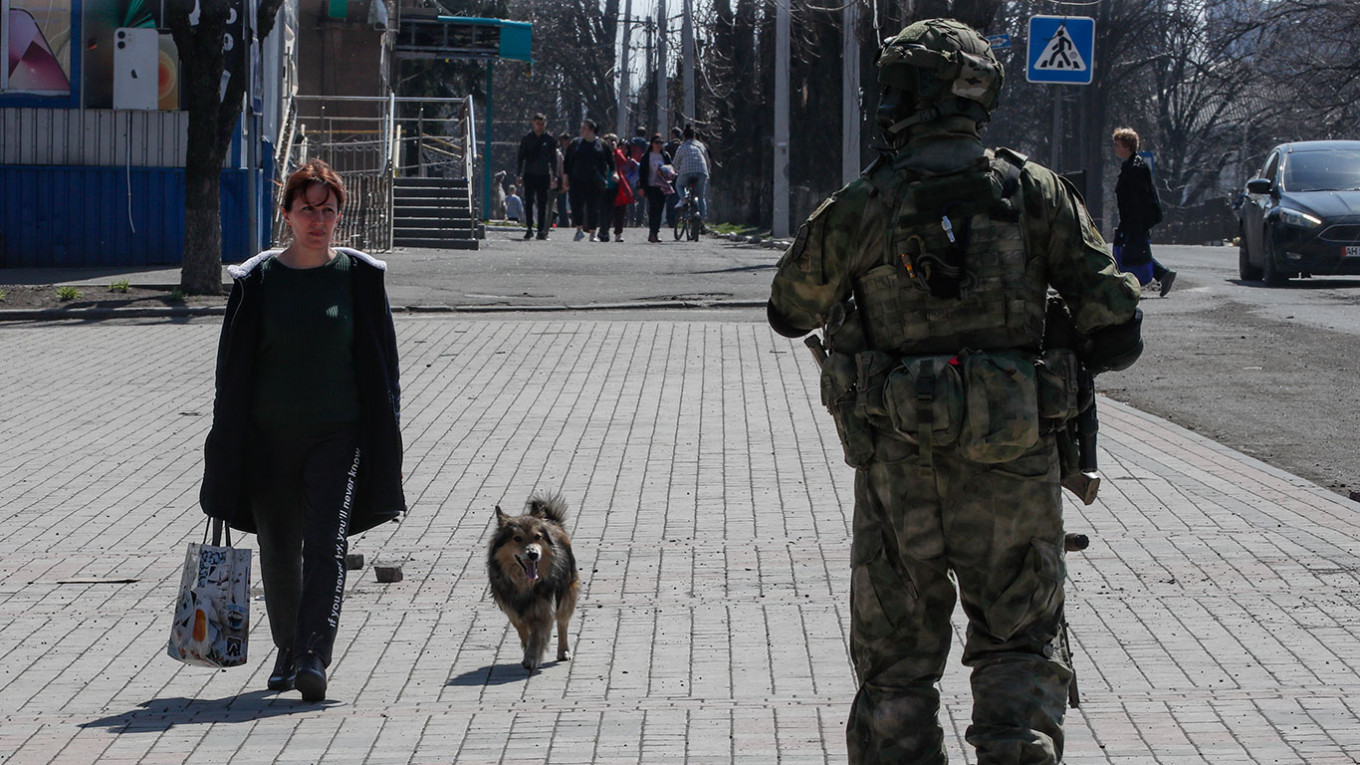 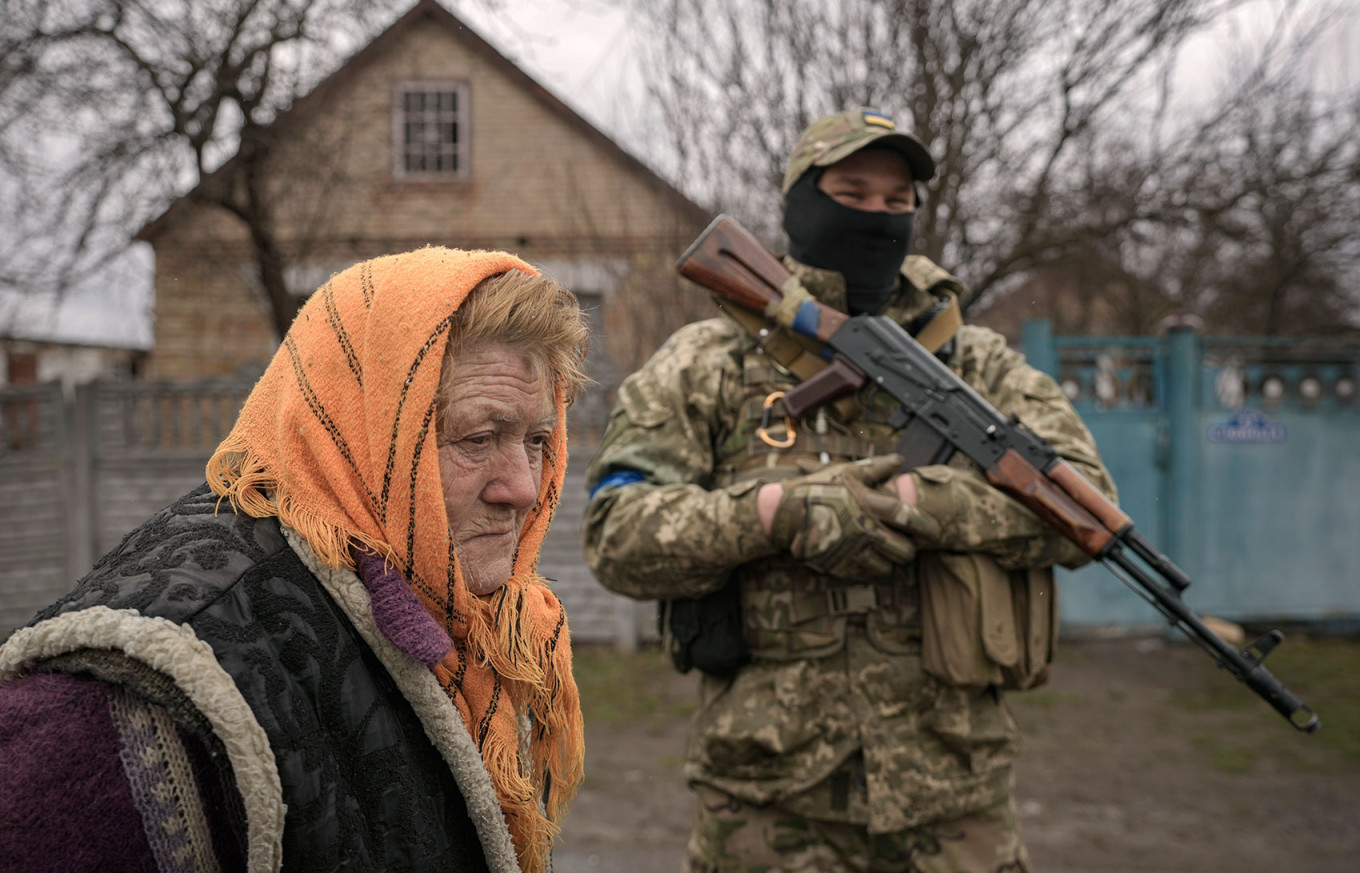 A woman waits for food distribution in the village of Motyzhyn, Ukraine, which was until recently under Russian military control.
Vadim Ghirda / AP / TASS 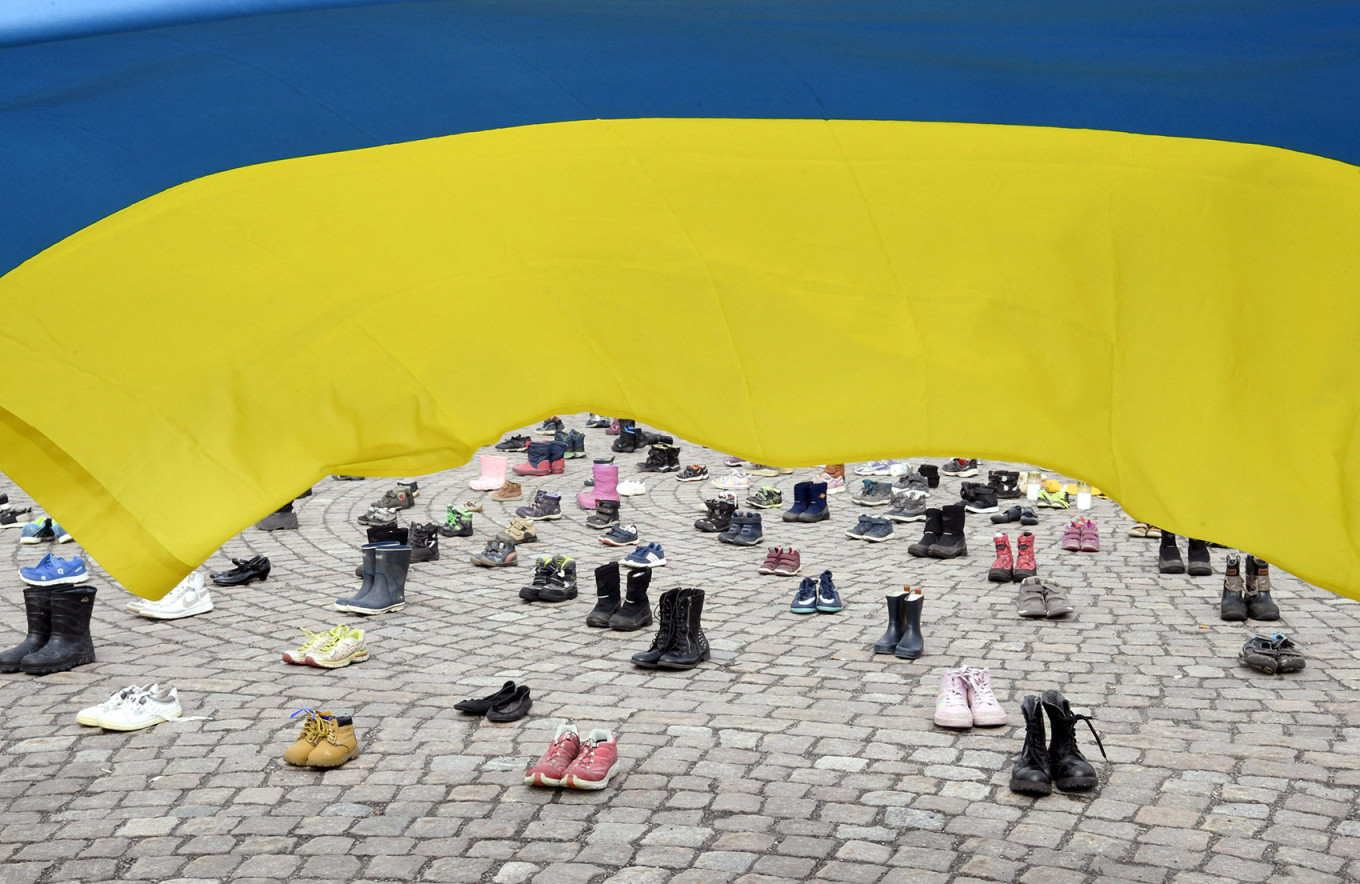 Children's shoes are seen during a demonstration in Helsinki organized by the Ukrainian Association in Finland, to honor the memory of the children killed in Mariupol.
Jussi Nukari / Lehtikuva / AFP
Read more about: Ukraine