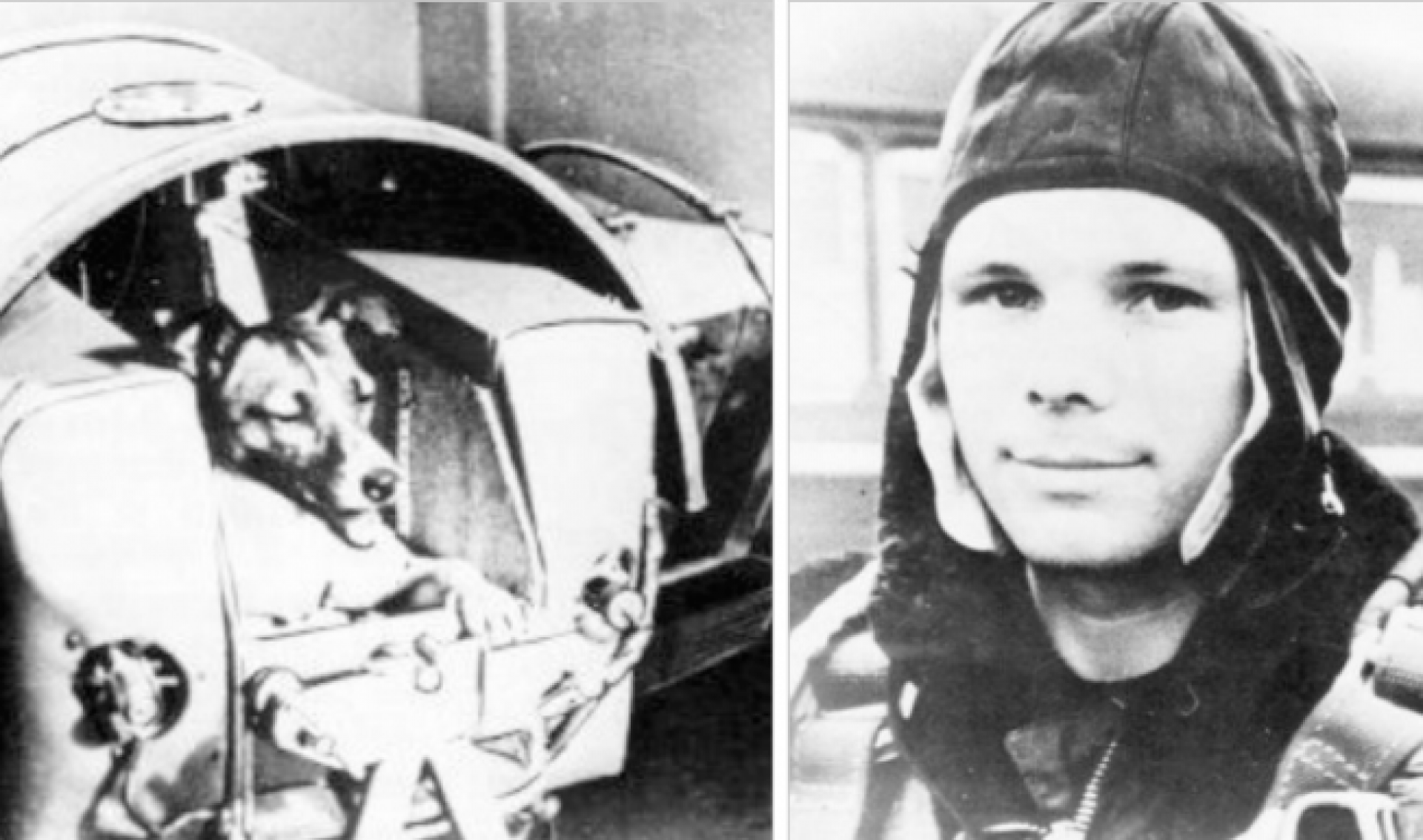 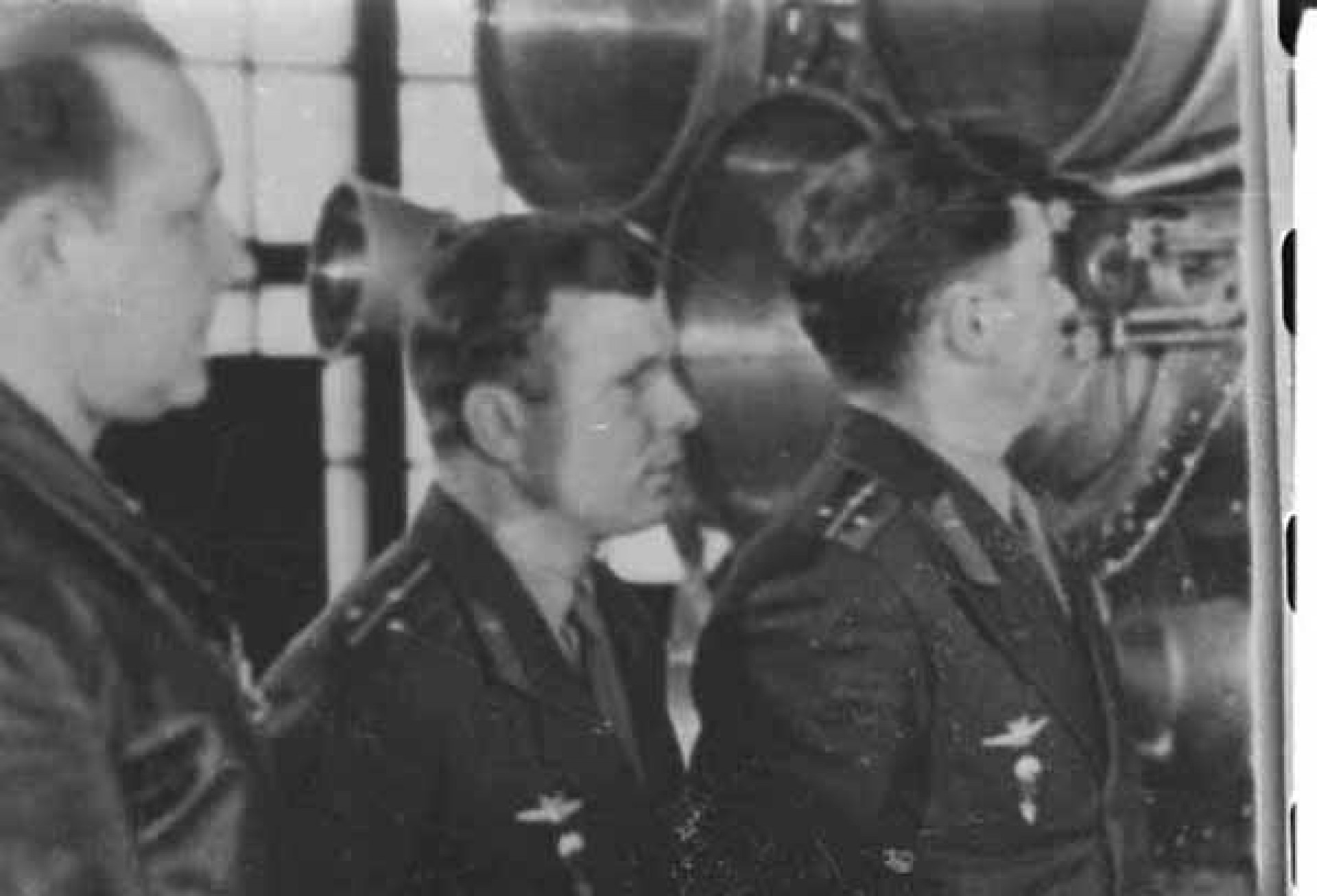 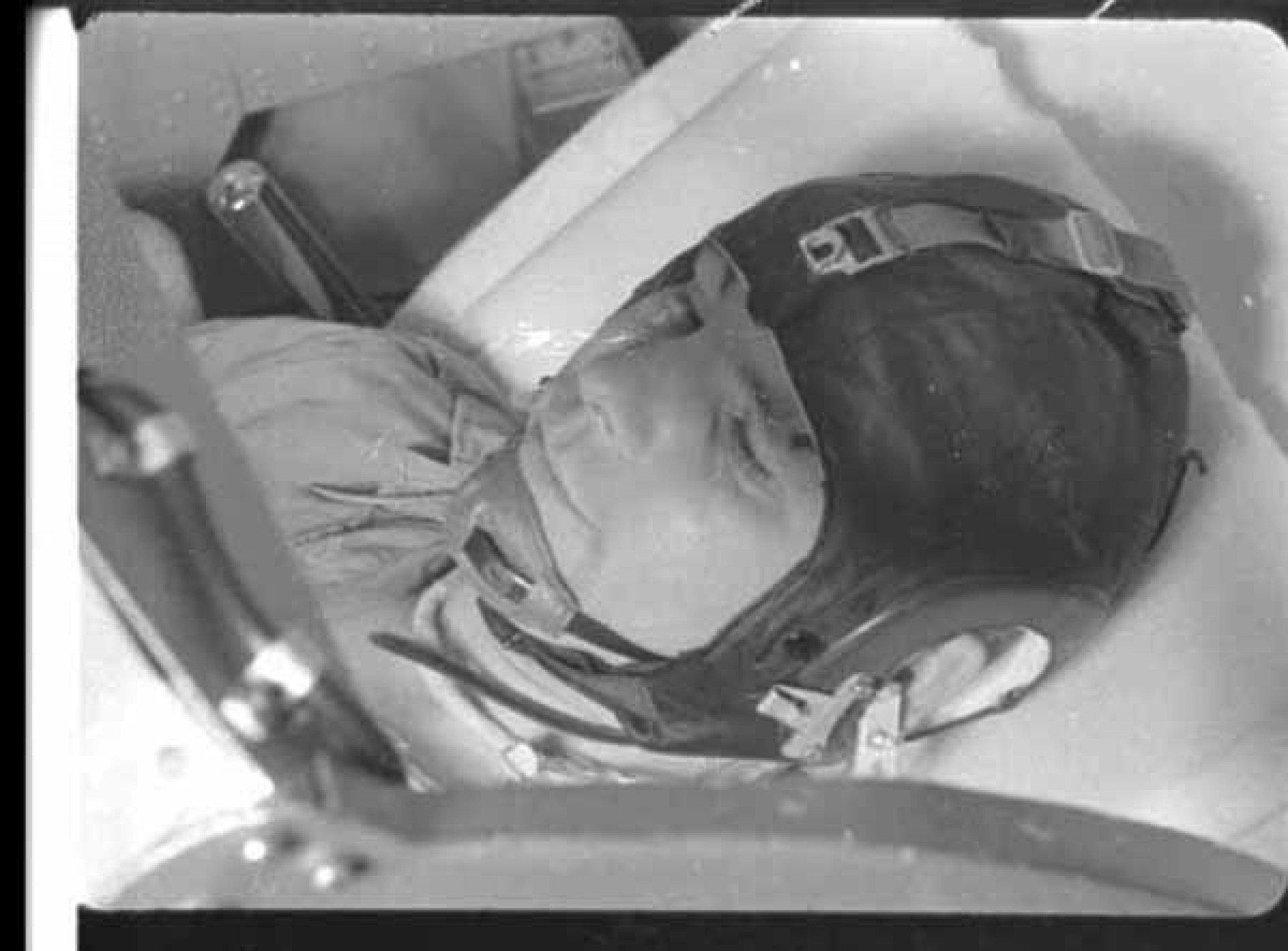 Yuri Gagarin is seen lying in a centrifuge during training for the space mission at the Russian Academy of Science's Institute of Biomedicine. Human centrifuges test astronauts' and cosmonauts' reaction to gravitational forces unlike any experienced on Earth. Federal Space Agency 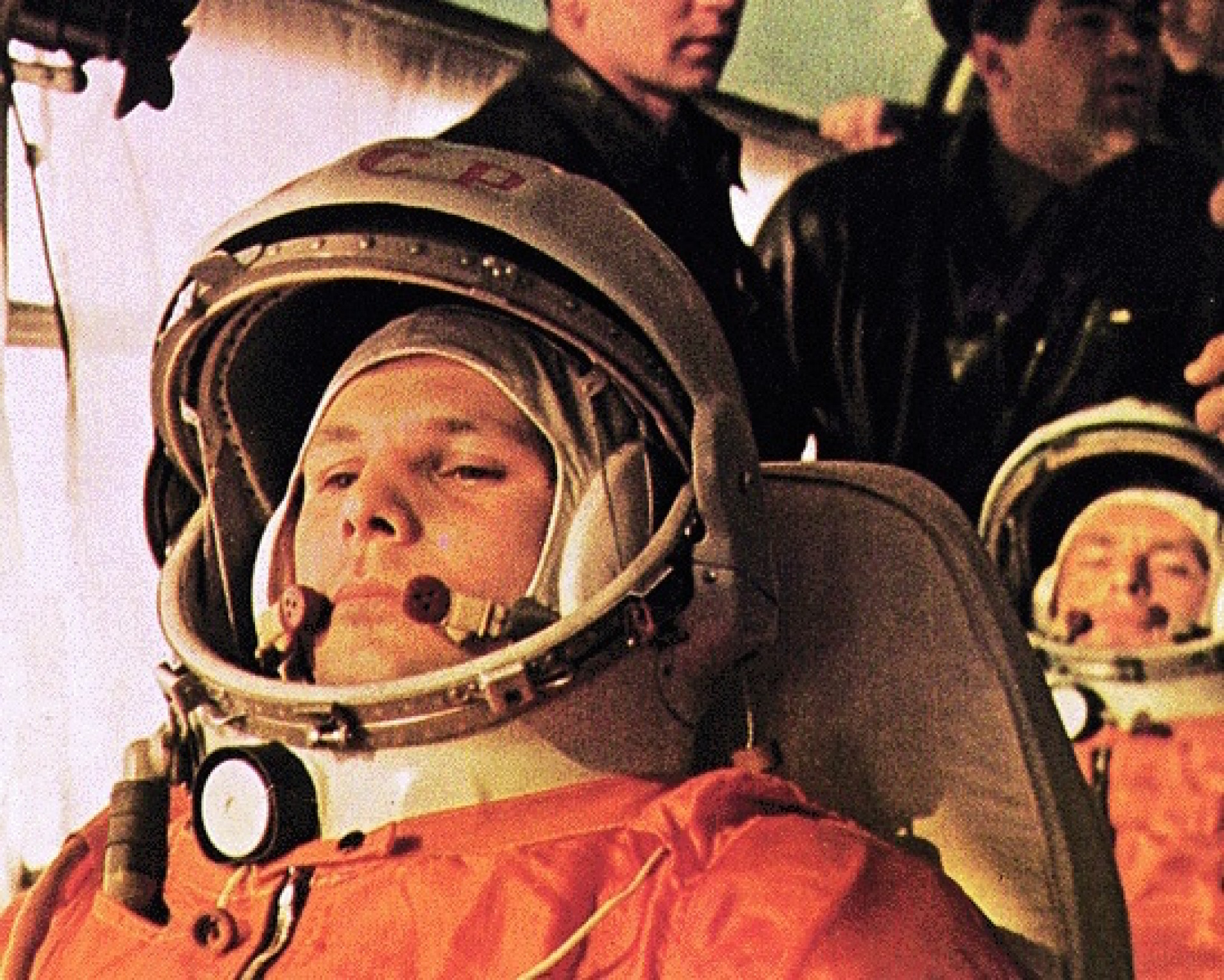 Yuri Gagarin aboard a bus taking him to the launch pad of the Vostok-1 at the Baikonur Cosmodrome. Behind him, in another orange pressure suit, is German Titov, the back-up pilot for Vostok-1 and the pilot in the later Vostok-2 mission which launched April 12, 1961. Alexander Mokletsov / Federal Space Agency / ESA 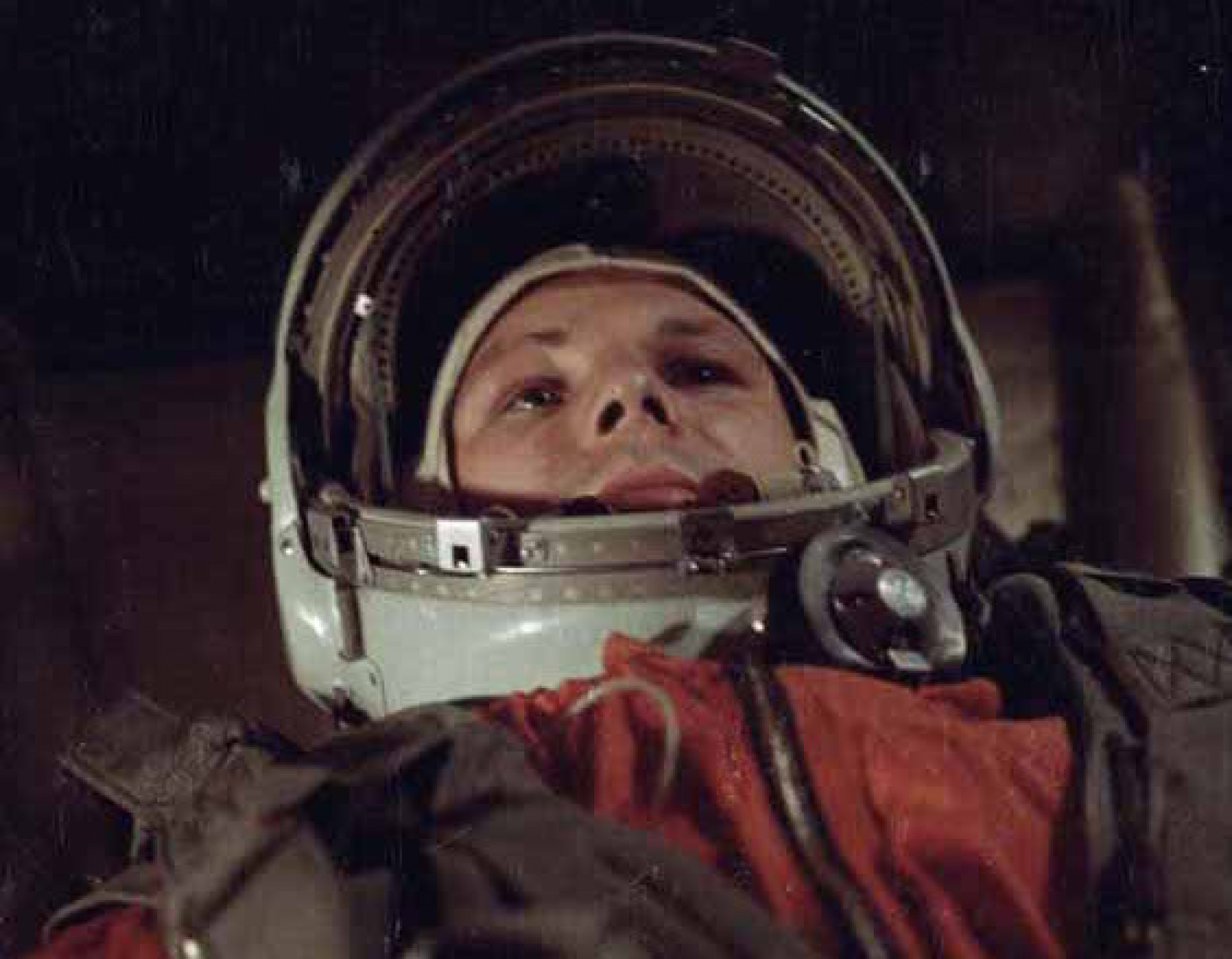 Radio station Govorit Moskva, or Moscow Speaks, reporting on the launch: Presenter Yuri Levitan says: "Moscow speaks! We share with you the news from TASS [news agency] about the first ever manned flight into space." As the rocket takes off, Yuri Gagarin is heard saying: "Let's go!" ESA 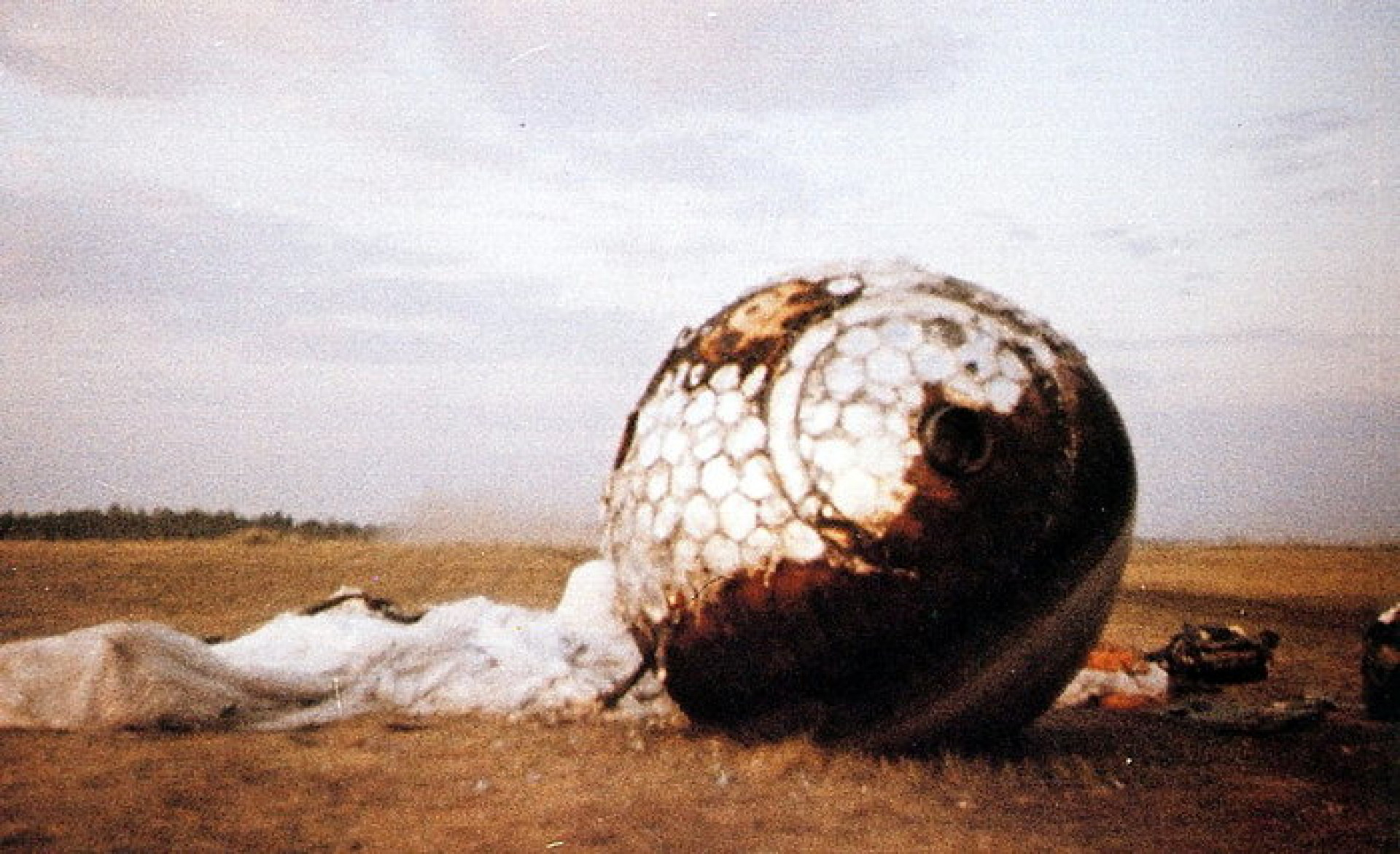 The reentry capsule of the Vostok-1 is seen with charring and its parachute on the ground after landing southwest of Engels, in the Saratov region of southern Russia. ESA 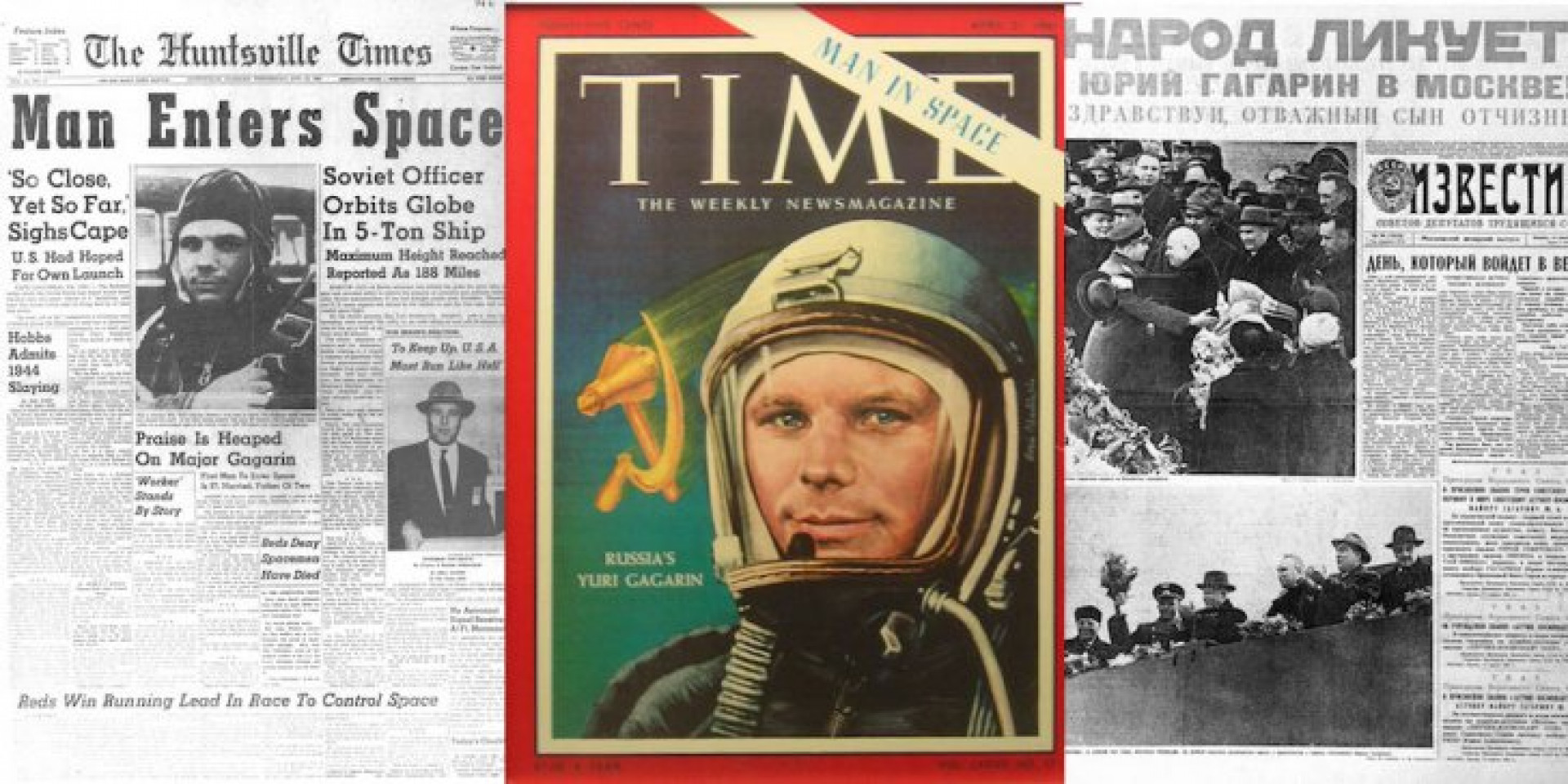 Gagarin was welcomed back to Earth as a hero. The Izvestia newspaper's front page reads: "Yuri Gagarin worshipped in Moscow! Hail, brave son of the Fatherland!" Others were quick to reassure the Soviet Union might have triumphed in space, but would not do so politically. NASA / Flickr / RIA Novosti 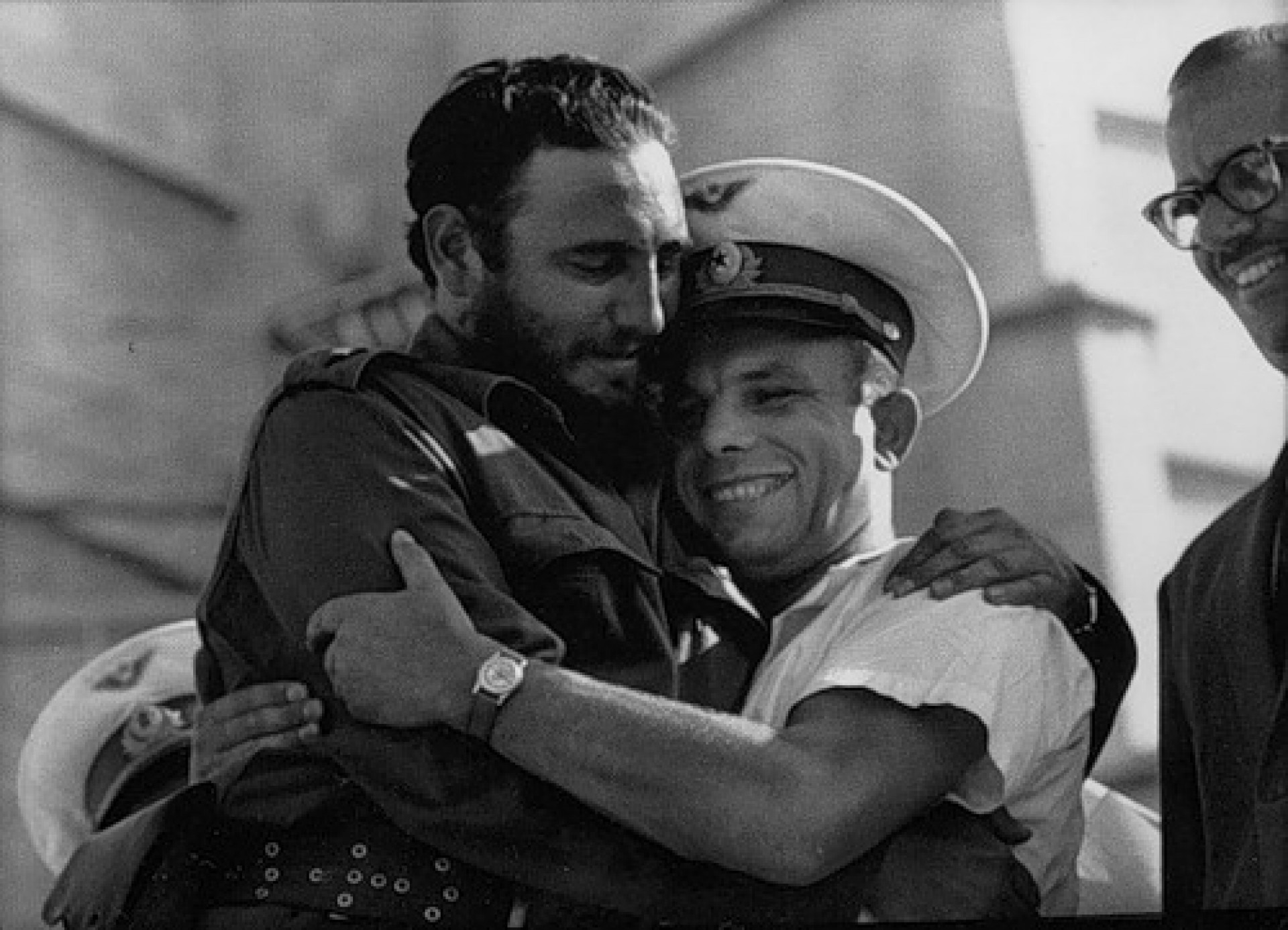 Gagarin's fame opened many doors. He visited around 30 countries and made journeys that would have been impossible for other Soviet citizens. In Havana on July 26, 1961, Gagarin met Cuban revolutionary Fidel Castro and told him Cuba would also venture into space one day. Almost two decades later, on Sept. 18, 1980, the Soyuz-38 took Cuba's Arnaldo Tamayo Méndez and the Soviet Union's Yuri Romanenko into space. Federal Space Agency 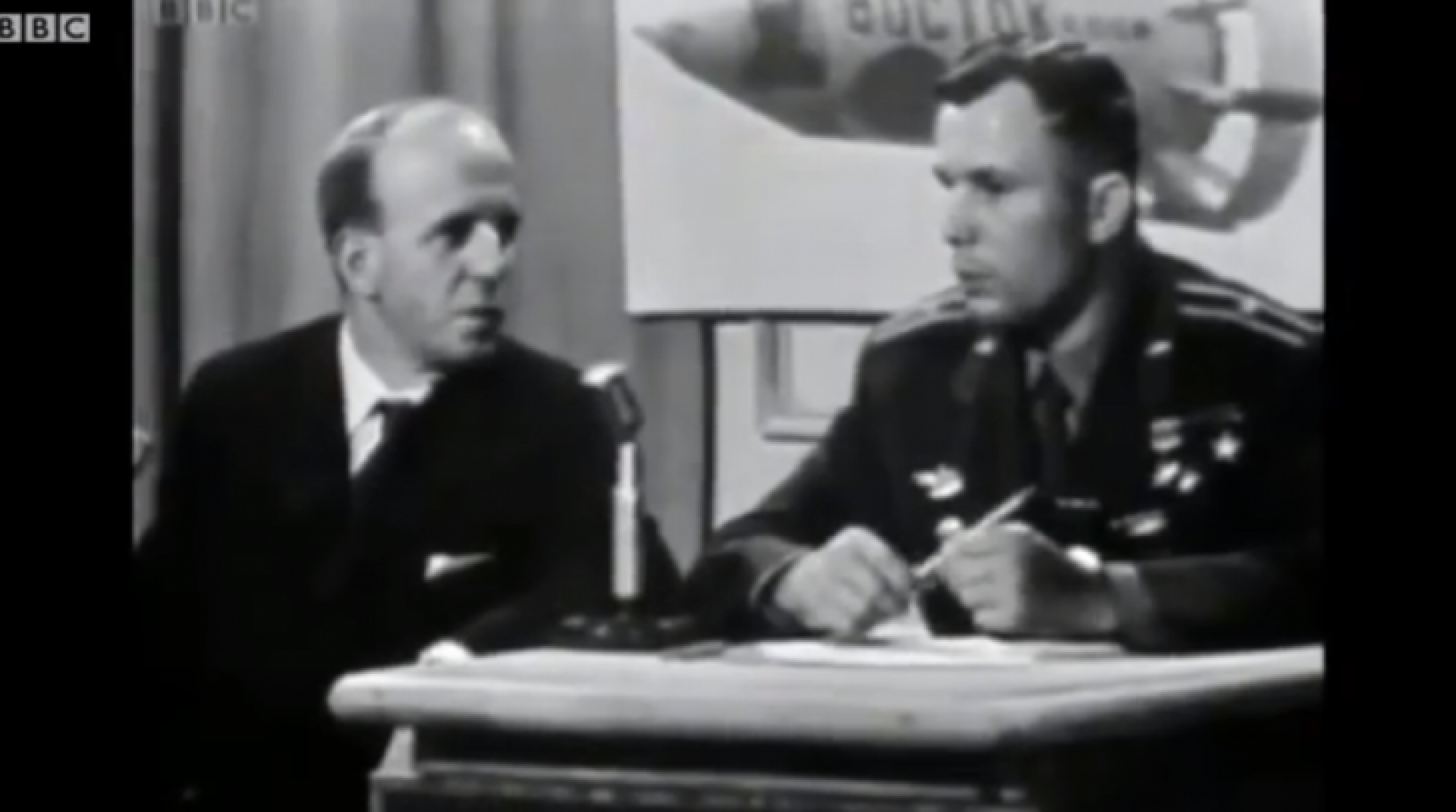 Yuri Gagarin is interviewed by BBC's Richard Dimbleby, Tom Margerison, editor of the Sunday Times newspaper, and Soviet journalist Yuri Fokin during the live translation of the Soviet Industrial Exhibition at London's Earls Court in 1961. YouTube 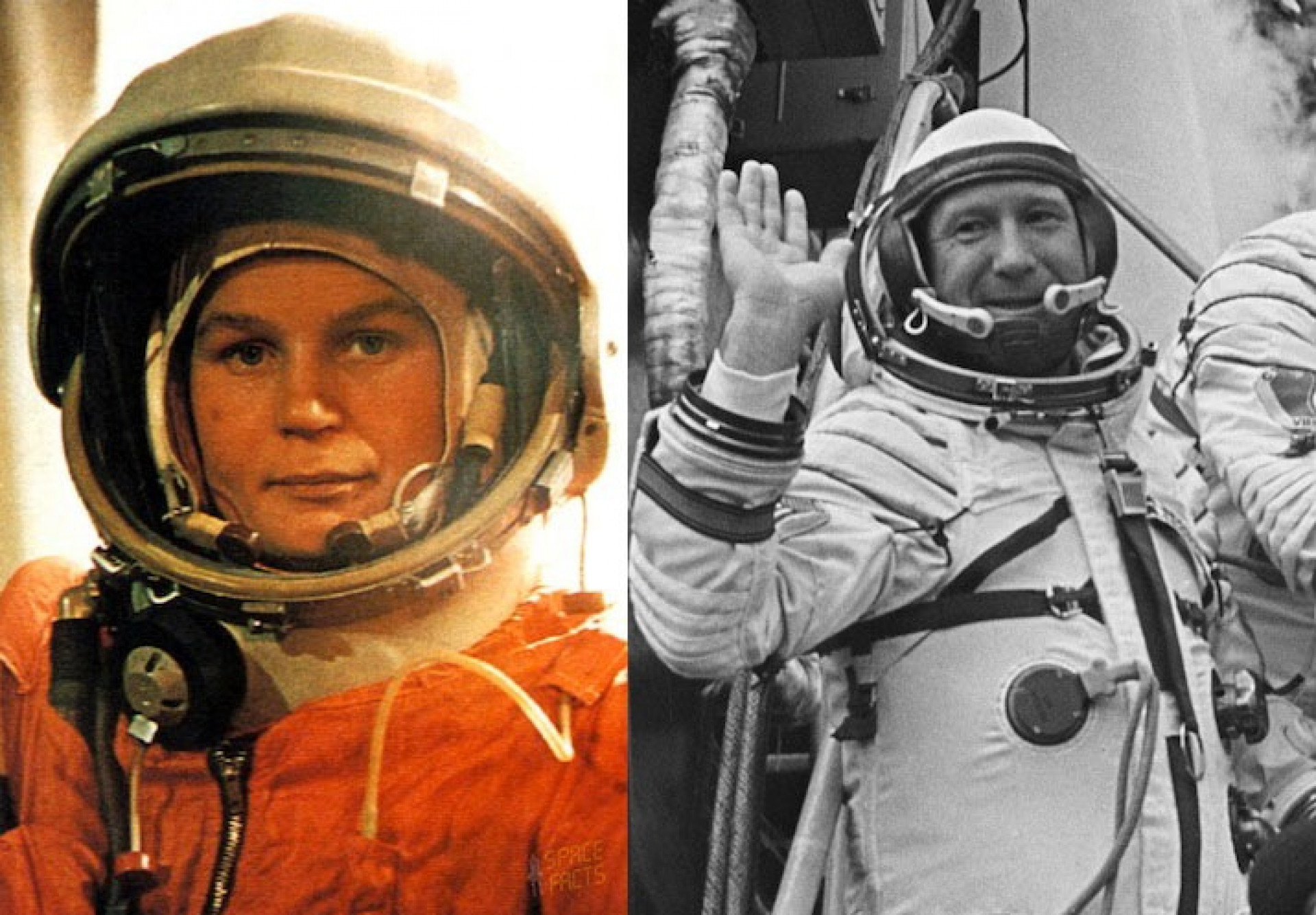 Gagarin's triumph has inspired many cosmonauts to set new records. Valentina Tereshkova (L) was the first woman to go into space in June 1963 at the age of 26 on the Vostok-6 rocket. Her mission lasted just under three days. On March 18, 1965, Alexei Leonov (R) became the first human to exit a space capsule, after he left the Voskhod-2 spaceship for a 12-minute spacewalk. NASA 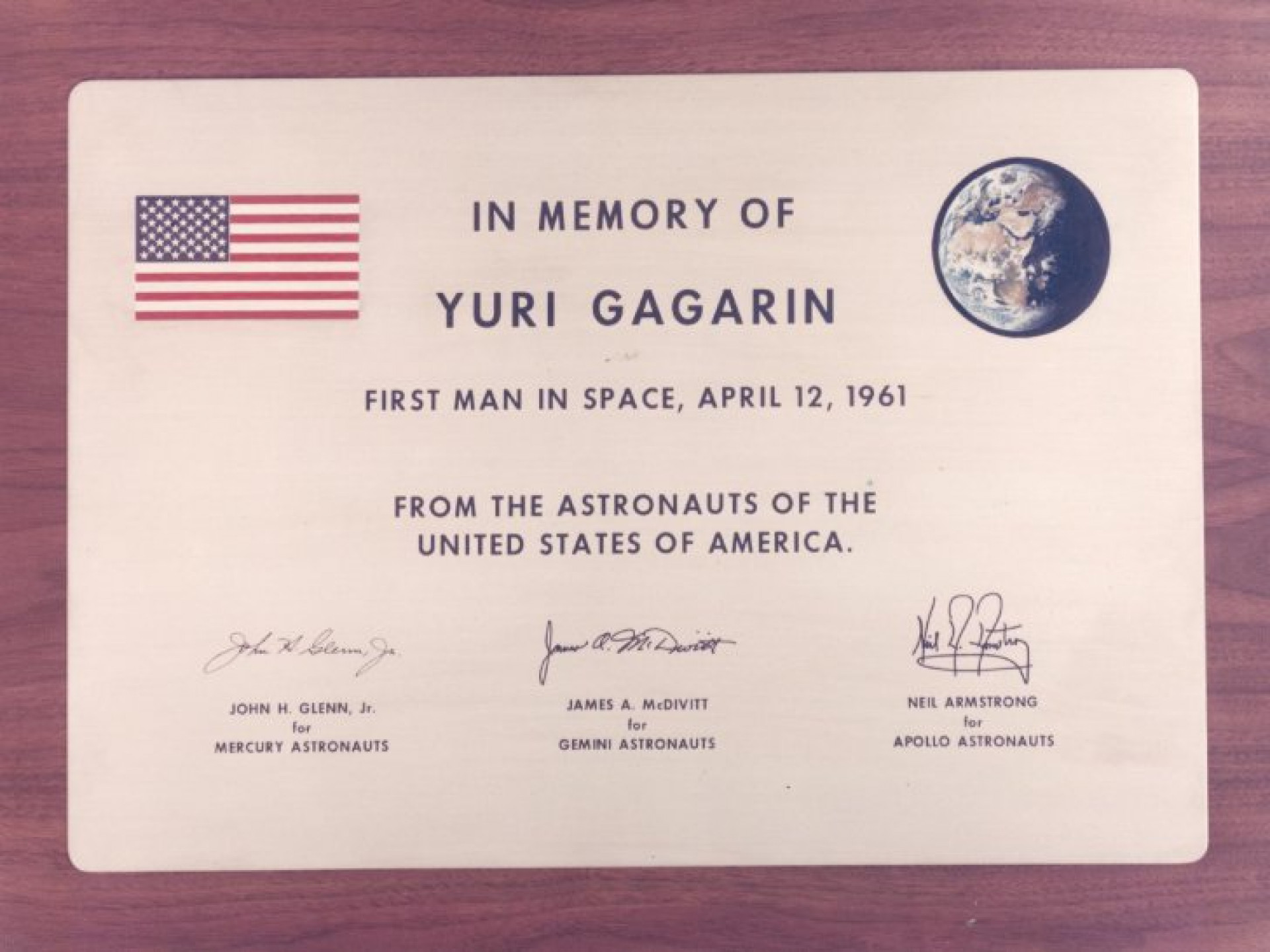 A plaque in memory of Gagarin was awarded to the Soviet Union at a ceremony in Moscow on Jan. 21, 1971, by Dr. George M. Low, acting administrator of NASA. Gagarin lost his life during a training session on a MiG-15 fighter jet on March 27, 1968. NASA

Cosmonautics Day, celebrated on April 12, commemorates the first ever manned flight into outer space by one of the world's most timeless pioneers: Yuri Gagarin.

In November 1957, Laika, a stray dog from Moscow, was launched into space in a 508-kilogram Sputnik-2 capsule and became the first animal to orbit the Earth. Laika's flight proved living beings could survive the conditions of outer space, but could humans undergo a similar test of endurance and live to tell the tale?

Roughly three years after Laika's mission, on Apr. 12, 1961, the 27-year-old Russian cosmonaut Yuri Gagarin followed suit and made history as the first man to orbit the Earth. His flight lasted 108 minutes from launch to landing.

According to NASA, the physical hazards of weightlessness at the time of Gagarin's flight were almost wholly unknown.

The creative challenge that has Russians recreating iconic artworks was an instant sensation — and we can't get enough.

How to Spend Quarantine Creatively in Russia: Look Like a Painting

Day 4 of Quarantine: Do I look more like Frida Kahlo or a Dutch noblewoman?

The ever-bustling Russian capital has been transformed into a post-apocalyptic sight.

A peek into everyday life for Russians amid the coronavirus pandemic.