The work of one of greatest theater designers of the 20th century, Leon Bakst, is on display at an extensive retrospective at Moscow’s Pushkin Museum. A versatile and prolific artist, Bakst gained international recognition with his flamboyant and elegant designs for the iconic Ballets Russes — an itinerant ballet company based in Paris.

A World of Beauty

Marking the 150th anniversary of Bakst’s birth, the exhibition features over 250 works, including portraits, landscapes, fabrics and costumes from museums and private collections in Russia and around the world.

“We tried to tell the story of an artist who was creating a world of beauty around him,” said Marina Loshak, director of the Pushkin Museum of Fine Arts, at the exhibition’s opening.

Among the paintings and drawings created by Bakst during his illustrious career, the retrospective features ground-breaking costumes that he created for ballet impresario Sergei Diaghilev and his Ballets Russes, which took Paris and London by storm in the early twentieth century. One of the most remarkable is the silk rose petal costume for the legendary dancer Vaslav Nijinsky’s performance in the ballet “The Spirit of the Rose”. 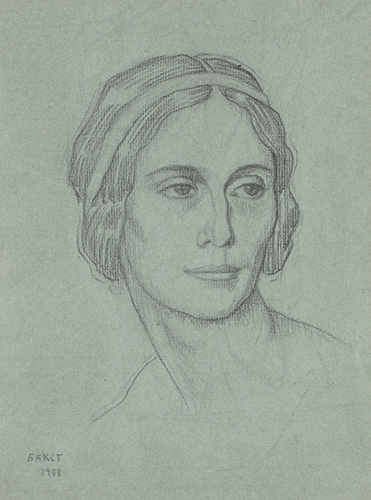 “When you say ‘Bakst’ you mean theater — you recall great dancers, great choreographers. You think of Fokine, Nijinsky, Isadora Duncan, Ida Rubinstein — those who inspired him and those who were inspired by him,” said Loshak.

Bakst used bright colors and unconventional techniques to expand the boundaries of the art of scenography, to break the rules and to stun the audiences. “He was a trendsetter, because he used very daring colors,” John Bowlt, the exhibition’s curator, told The Moscow Times in an interview. “In Paris audiences were often scandalized by these gaudy, vulgar colors.”

He was a rare artist who was able to think in terms of two dimensions and three dimensions, Bowlt stressed. “For him the body was the central part. So he frees the body. And for him in the body the main element is movement, which he says we must emancipate. He said that in the past, in the 19th century ballet, the restricted tutu was a prison of the body — it entrapped you. Whereas by using all those veils, feathers and belts, he that said you could amplify the movement of the space.” 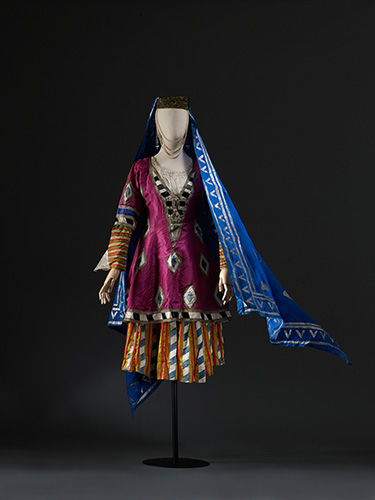 The ethereal costumes he created for the diva of Ballets Russes, Ida Rubinstein, were shocking in their eroticism. Ballets Scheherazade and Cleopatra, both choreographed by Michel Fokine, captivated and bemused the Paris public with their Oriental opulence and racy sensuality.

“Of course they caused a scandal and part of Paris audience was indeed very shocked. But Diaghilev was very clever — he knew that if you shock people they come back. And it worked: it was a great publicity stunt and it of course also left its mark on 20th century theater,” said Bowlt.

At Heart a Designer

Bakst was one the rare Russian artists who had a significant impact on European culture. Perhaps key to his success was the fact that he was not just an artist, but a genius designer.

His real name was Leib Haim Rosenberg. Born into a middle-class Jewish family in Grodno, in modern-day Belarus, he studied at the Academy of Arts in Saint Petersburg where we took the surname ‘Bakst,’ based on his grandmother’s family name.

By the mid-1890s he had joined the circle of artists and writers formed around Sergei Diaghilev and the artist Alexandre Benois. They later co-founded the influential magazine and artistic movement Mir Iskusstva (World of Art), which had a profound influence on Russia and impressed the rest of Europe.

Rejecting the ideas of the earlier period which focused on depicting social issues, the artists of Mir Iskusstva plunged into the aesthetics of Art Nouveau, seeking self-expression and perfect beauty. 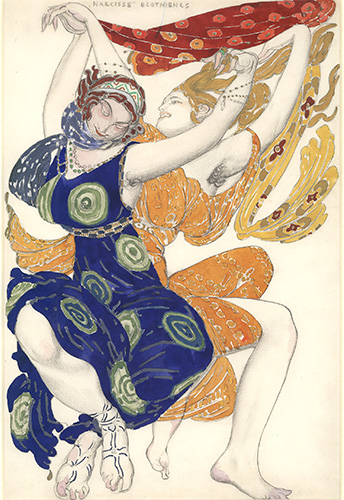 “They were so interested in Wagner and the gesamtkunstwerk — bringing the arts together. In the 19th century they were very split: you had painting, you had text, you had music. But they tried to bring it together as totality,” said Bowlt.

“He was not afraid to be a designer,” said Loshak. “In those days being a designer was odd because an artist was viewed as a ‘messiah’ who must paint portraits and accept his role as someone who influences people’s souls. And nevertheless he becomes a designer — in the modern sense of the word — like a designer of interiors, a fashion designer.”

Bakst not only designed clothes, but also bags, wigs and other fashion accessories. Bakst was also close to the the fashion houses of Poiret and Chanel. He channeled the archaic charm of Ancient Greece and the extravagance of Orientalism into the aesthetics of Art Nouveau. His bright innovative colors and the flowing lines of his fabrics are still a source of inspiration for the world of fashion. Mir Iskusstva particularly was interested in theater, as it was the synthesis of all arts – music, dance, painting and drama.

At the exhibition, Bakst's legacy is clear: beauty and opulence, the spirit of innovation and freedom from the shackles of tradition.