As his first international race, the Kanazawa marathon was a special occasion for Viktor Ugarov, 30. Thousands of amateur Japanese runners took part, but none, in the end, provided serious competition for the runner from Irkutsk. Ugarov, who a year earlier had finished fifth in the Russian Championship, ended up winning the marathon with a solid time of 2:17.

Once back in Siberia, however, Ugarov discovered that his result had been canceled and his prize seized. Officials of Russia's athletic governing body, the All-Russia Athletics Federation (ARAF), confirmed to the press that Ugarov had been included in a blanket ban imposed just a day before. The ban prohibited a list of 4,027 Russian track-and-field athletes from participating in any international competitions curated by international governing bodies International Association of Athletics Federations (IAAF) or Association of International Marathons and Distance Races (AIMS).

"No one knew such a ban existed at the time — neither me, nor the Japanese organizers," Ugarov says. "The Japanese still had my result officially recorded in their protocols."

In several rounds of negotiations with ARAF, the athlete was able to prove he was unaware of the ban, and avoided disqualification. But he was the exception, and for him and many other professional and semiprofessional runners, international races were placed out of reach.

The discipline-wide ban has hit Russian professional and semi-professional long-distance runners hard. Previously, runners could participate in hundreds of international marathons, half-marathons and 5-10-kilometer races held throughout the year. They could win prize money in hard currency and improve their results by running the best courses.

Now, however, they are confined to Russia's six-month running season, its underdeveloped sport infrastructure and the limited race opportunities across the country.

On June 17, the IAAF will decide whether to lift the blanket ban. This ruling will not only determine whether the Russian track-and-field team is able to compete at the 2016 Rio Games. It will also define the careers of hundreds athletes who don't compete on an Olympic level and are, essentially, out on their own. Many of these runners don't have any history with the institutions suspected of doping. Fewer still are accused of being involved in its shadowy schemes. 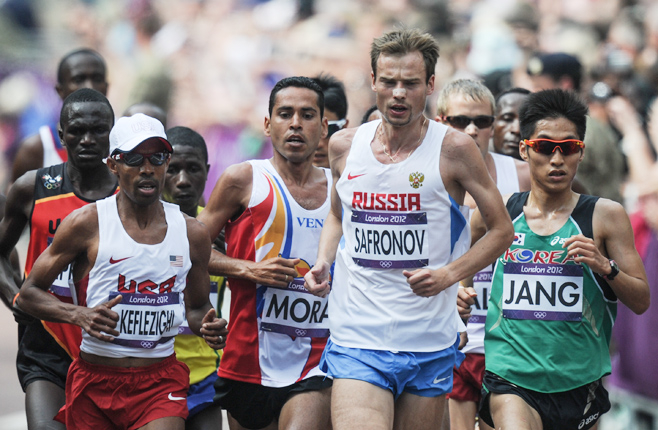 Dmitry Safronov, one of Russia's leading marathoners,  at the 2012 Olympics in London — he finished 23rd.

Some runners didn't believe until the very last minute that there would be a blanket ban. Dmitry Safronov, 35, one of Russia's top marathon runners, was training for a marathon in Japan and says he didn't take the news too seriously when it first came out. "It was the day of my last serious training session, and I just worked out as planned," he says. He assumed the ban would not affect him, he says: "I was surprised when a couple of days later my manager told me the Japanese were refusing to let me — or any other Russian — participate in the race."

Safronov had paid for his training camp in Kyrgyzstan himself, in addition to tickets to Japan and the race entry fee, and ended up losing all this money.

But it's not only money, it's confidence, too. "It was a punch in the face. I felt empty inside and lost," the runner says. "I put in so much work."

Before the ban, Safronov ran two or three international races a year. Now, he is reluctant to talk about his racing plans for the upcoming season at all. "I have no idea whether they will lift the ban," he says. "For now I've decided to focus on training for the Russian Championship."

Rinas Akhmadeyev, the winner of last year's 10-kilometer race at the Moscow Marathon, is also a member of the national team. It was his dream to run in Rio. After winning the race in September 2015, Akhmadeyev, 27, resolved to achieve the necessary results in two international competitions in June to qualify. But the ban has changed his plans. "I had to return plane tickets I'd already bought," Akhmadeyev says.

Natalya Sokolova, 34, one-time marathon champion of Russia, has a similar story. "She was supposed to qualify for the Olympics," says her husband, Alexei Sokolov, a prominent runner and holder of the current marathon record in Russia. "She was training to participate in a race in Houston, [Texas] in order to qualify, and then her name turned up on the list — alongside mine, and my younger brother's, also a runner."

The ban has affected athletes in different ways. It's manageable if you are on the national team. The team pays your salary, sends you to training camps and races and supports you. However, for athletes not on the national team, the ban on international races means less prize money and a harder road to winning.

Mikhail Bykov, two-time winner of the St. Petersburg Marathon, used to participate in European races to "earn some money." He planned to run a marathon abroad in the autumn. After his name turned up on the IAAF ban list, there were few options left.

"In Russia, there are three marathons with decent prize money. And you can't win all three, because they are scheduled too close to each other. At best, you win one," Bykov, 33, told The Moscow Times. "Russian marathons are also harder to win since the conditions are much worse. St. Petersburg is always too windy, while Yekaterinburg and Moscow are too hilly."

The list published by the IAAF in November 2015 contains 4,027 names and is not exhaustive, according to a disclaimer in its introduction. One of the aims of creating such a list was to distinguish "amateur runners" — those who don't deserve to be punished with the ban — from professionals "affiliated with" the ARAF.

Unfortunately, an affiliation doesn't necessarily mean being on the national team. An athlete need only have participated in the Russian Championship — or another competition organized by the ARAF.

As it turns out, even having participated in a youth championship is enough to be placed on the banned list. That is how  sports journalist Vladimir Ivanov ended up on the list, even though he is not a professional athlete.

The Moscow Times identified three athletes on the list who are deceased, as well as a few athletes in their late 60s who have retired from professional racing.

A spokesman for the IAAF told The Moscow Times that the list was compiled "from names received from the ARAF Russian Athletics Federation" and "names included in the IAAF database." In comments to The Moscow Times, ARAF President Dmitry Shlyakhtin said the IAAF had based it on data which was at least five years old. "A lot of things happened over that time. They update their databases every six months, but [for some reason] the same people are in them," he told The Moscow Times.

Shlyakhtin added that right now the ARAF doesn't have any relations with the IAAF and could not influence it — even to remove superfluous names.

"It would appear that they just took lists from official competitions, and everyone who has ever showed a decent result made this list," says Bykov. 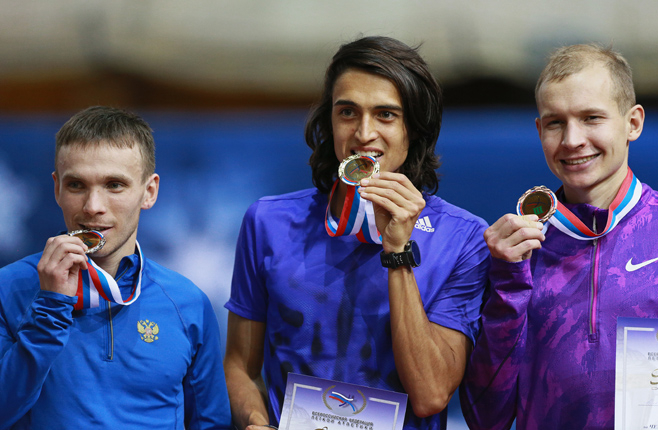 Runners polled by The Moscow Times agreed that a block on participation in international races virtually ruled out good times. Russian marathon courses are usually convoluted, and weather conditions are far from perfect. "For marathoners, a lot of things matter. The quality of the asphalt, relief of the course, the number of competitors running alongside you, even the spectators cheering you on," says Safronov. "These things might seem small, but they are actually crucial."

In Russia, running has only just begun to develop as a sporting movement, and, so far, local races are lacking in one way or another.

Then, of course, there's the money issue. If you're not on the national team, no one will pay your salary, explains Sokolov: "A stipend Russian Championship winner receives in St. Petersburg, for example, is 15,000 rubles ($230). Do you think it's possible to live off that?"

The largest Russian marathons usually offer 250,000-300,000 rubles ($3,860-$4,630) in prize money. International events provide the opportunity to win $5,000-$50,000, depending on  the size and prestige of the event. Often, if a runner fails to make the top three, he could still be paid. "If you're a well-known professional athlete, organizers of big marathons will invite you to participate and can pay for the mere fact that you did," Sokolov says.

Besides making a living, a professional athlete needs to invest in their career. For example, to make the Olympic team, an athlete has to undergo three anti-doping blood and urine tests. "Each costs 600 euros ($685) at least, and you need to pay out of your own pocket," Sokolov says.

Participating in races around the world helps promote your personal brand, adds Akhmadeyev. "The more people know about you, the better the chance you will be invited to a more prestigious event," he says.

Russia has 10-15 world-class long-distance runners, says Bykov. Since they are no longer allowed to race abroad, they will have to compete with each other in the limited number of races in Russia. That means fewer chances to win prize money, and increased competition.

This is not the type of competition that would help athletes conquer new heights either, warns Akhmadeyev: "We need to race internationally and learn from that experience. If we only race in Russia, any progress will be doubtful."

The running season in Russia is short — from May to October — so it is not inconceivable that the international ban will cover an entire season. According to Bykov, many runners are continuing to train for autumn marathons in the hope the ban is lifted. They will know if their hopes are fulfilled on June 17.

Should the decision go against Russian runners, the highlight of many running seasons will be the Moscow Marathon on Sept. 25.

"What is happening now to Roman Anine is a story of revenge," his colleagues said.