From a military point of view, Russia's ground operation to annex Crimea in 2014 was an exceptionally clean affair, and gave ample opportunity to demonstrate the fruits of Moscow's military modernization efforts. But for Russia's famed Black Sea Fleet, the most tactically relevant action it could take was to deny Ukrainian ships from setting to sea by scuttling one of its oldest and rustiest cruisers in the mouth of a channel.

Despite efforts since 2008 to upgrade Russia's aging Soviet-built military, the Black Sea Fleet in 2014 was a decrepit shell of the once great outfit. Under agreement, independent Ukraine allowed Russia to keep ships in Crimea after the fall of the Soviet Union, but it largely prevented additional Russian vessels from being added. Much of that fleet spent 25 years rusting away at their moorings, and many doubted the fleet was capable of combat.

This led to military stagnation in Crimea, but the arrangement was tolerated in Moscow for years. This changed with the rise of the Maidan protest movement in Kiev. As a pro-Western government formed there, the Kremlin could no longer be sure its basing agreements in Crimea would be honored.

In the two years since annexation, the fleet's fortune and capabilities have profoundly changed. Moscow has wasted little time in diverting resources to rejuvenating the fleet, adding around a dozen combat vessels since 2014, and Sevastopol is now a major hub of Russian military and geopolitical power projection.

Source: IISS, Russianships.info, Center of the Analysis of Strategies and Technologies

The ultimate decision to annex Crimea from Ukraine may have been a largely emotional and political one, but the strategic significance of the Black Sea Fleet's Sevastopol headquarters provided Russian decision makers with a concrete rationale to seize the peninsula. Whoever controls Crimea can easily assert a dominant position across the entire Black Sea region, which is home to several NATO member states and former Soviet republics that Moscow hopes to keep in its orbit.

"If you look at a map, you can see that Crimea sits right there in the middle of the Black Sea," says Dr. Dmitry Gorenburg, an expert on the Russian navy at the Virginia-based CNA think tank. "From Sevastopol, the Russian navy can pretty much control all approaches and dominate the region vis-a-vis Turkey."

This line of thinking was enshrined in the latest draft of Russia's national naval doctrine, released on July 2015. The document envisions a reinvigorated presence in the Black Sea, allowing Russian ships to reestablish lost footholds in the southern Atlantic, the Mediterranean Sea, and through the Suez Canal. In the document, Russia says its aim is to wield influence abroad and resist NATO encroachment.

These ambitions were enabled largely by the annexation of Crimea. Although Russia was developing an alternate naval facility at its Black Sea coastal city of Novorossiisk, this position lacks the centrality that makes Crimea strategically valuable. With the penisula firmly in Russian hands, Sevastopol now acts as a forward operating base, supported from behind by Novorossiisk.

In this capacity, transport ships from the Black Sea Fleet have been used to deliver goods from Novorossiisk to the Russian naval facility at Tartus on the Syrian Coast, says Maxim Shepovalenko, a former Russian naval officer, now an expert at the Center for the Analysis of Strategies and Technologies.

This route, known as the Syrian express, is a vital line of supply for Russia's military operation in Syria. But the arrangement between Sevastopol and Novorossiisk is even more significant in that it allowed the Russian navy to develop a layered defense arrangement incorporating naval aircraft and ground-based defense units, Shepovalenko says. 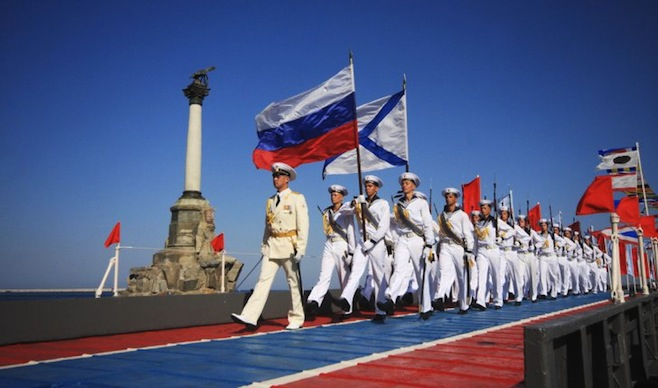 Russian sailors march during celebrations to mark Navy Day in the Crimean port of Sevastopol.

The creation of a "defense in depth" arrangement in the Black Sea kicked into high-gear two months after Crimea's annexation. In May 2014, Defense Minister Sergei Shoigu announced that 68 billion rubles ($957 million) would be diverted from a 20 trillion ruble ($292 billion) military modernization budget to overhaul the fleet. Officials at the time claimed it would buy the Black Sea Fleet some 80 new ships. That number is undoubtedly misleading, as it also counts tugboats among the new assets.

Rearmament takes time, especially when talking about ships. The first deliveries of new vessels to the Black Sea were completed by the end of 2014, with two Improved Kilo-class diesel-electric submarines inducted into the fleet. Two more Improved Kilo-class subs were delivered in 2015, and a final two submarines are scheduled for delivery this year.

In total, the Black Sea Fleet received around 15 vessels of various sizes and classes, according to data collected by CAST. In addition to the submarines, these included seven patrol boats and two missile corvettes.

The heavier surface combatants are expected to go into service with the fleet later this year, and include three brand-new Admiral Grigorovich-class frigates. Three more are on the way, but an unintended consequence of Russia's war with Ukraine has been the loss of Ukrainian engine deliveries for the large ships, leading to delays. And an additional 15 new missile corvettes are expected by 2020, according to CAST.

When judged by size, the beefing up of the Black Sea Fleet may appear to be anti-climactic to citizens of Western nations that field large navies comprised of increasingly large and complex ships — such as the United States. But what makes the modernized capabilities of the Black Sea Fleet noteworthy is the key capability shared by the Kilo-class submarines, the Grigorovich-class frigates, and small missile corvettes: they all serve as launch platforms for Russia's brand-new Kalibr land attack cruise missiles.

The Kalibr turned heads in October 2015, when Russia's Caspian Flotilla launched a major salvo of the new cruise missiles from the Caspian Sea to hit alleged terrorist groups in Syria. The strike demonstrated that Russia now has long-range guided attack capabilities, which it previously lacked.

In addition to the new ships, Russia's has stepped up land-based defenses. Missile and coastal defense systems now cover the peninsula, and new fighter and bomber wings are stationed at Crimean airfields.

The net result of this activity is simple: in two years Russia has created an elaborate defensive zone covering Crimea and most of the Black Sea region. With this net, it can both throw its weight around the neighborhood and seriously deter any potential foe from entering the Black Sea.

With even heavier additions on their way, Russia is on track to reassert itself as the dominant naval power in the Black Sea region.

Correction: The print version of this article incorrectly stated the value invested in Russia's modernization program.

Russia celebrated Navy Day on Sunday and Mark Galeotti analyzes the condition of the modern Russian navy and whether there is really anything to celebrate...
news

Ukraine is planning a "substantial enhancement" of its military position around the Black Sea and on the border of Crimea as part of a strategy of regaining...
news

The head of Russia's Black Sea Fleet on Sunday declared the end of a period of post-Soviet naval decay, saying that the fleet had received over...
Body count