You could hear a young woman yelling, but her voice was diluted in the sound of bulldozers, smashed glass and metal.

"What are you doing?! There are people still in there! Stop it!" she said.

Several police officers stood outside, watching the bulldozer do its work without any intention to intervene. The woman continued yelling: "The are still inside! Can't you drag them out?" she said.

Eventually, reluctantly, a police officer responded. "We told them to vacate the premises," he said, monotone.

The bulldozer kept thrashing the retail pavilion, and the people kept screaming.

Moscow streets are full of scruffy, temporary retail structures. They grew and flourished during the '90s and 2000s, as convenience stores of every hue filled the empty scopes left by Soviet city planners. They clung like old trees to buildings, metro stations and public spaces. Some of them grew into shopping malls and café chains.

On the night of Feb. 9, Moscow city authorities signaled its intention to remove them from the cityscape. It began the process by demolishing 97 structures overnight in an operation described by Russian media as a "night of long shovels."

Moscow Mayor Sergei Sobyanin and his team have long vowed to bring order to city planning, and have criticized temporary retail structures as being unsightly, unhygienic and unregulated. They argue that they were perfectly entitled to demolish the structures that, they say, were built illegally.

But the demolition, conducted under the dark of night and with police back-up, looked more like a military operation than a legal procedure. With paperwork in hand, the store owners had every reason to question the legality of the process. 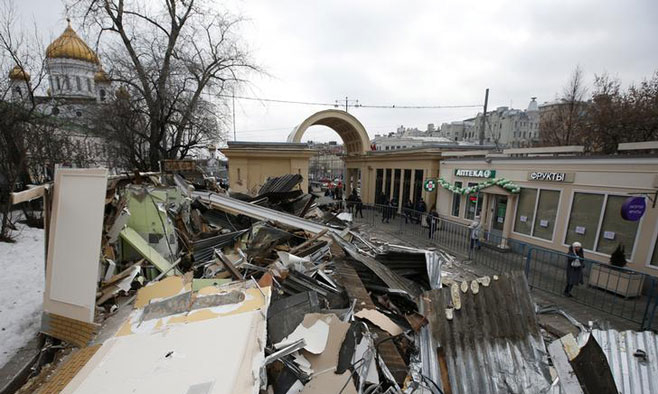 Kropotkinskaya metro station was home to six pavilions with shops and cafes. Three have been demolished while three were not on the list of targeted buildings. All six pavilions have the same owner.

It was two months ago that City Hall first announced its decision to demolish a total of 104 kiosks and pavilions. A demolition list was published by City Hall and, its officials claim, all owners were informed by mail that their "illegal" property was earmarked for demolition.

The owners were "allowed" to take the pavilions down themselves. "We informed them about the deadline and even postponed it for one month," said Alexei Ionkin, a senior official of the Moscow state real estate inspectorate. "The deadline for 97 buildings ran out at midnight on Feb. 9," he said. As night fell, the bulldozers rolled.

Yet many store owners say that the sight of the bulldozers came as a complete surprise. Some establishments, like a three-story restaurant in downtown Moscow never thought authorities would follow through on their threats, an employee told The Moscow Times.

When the workers showed up and began dismantling the building and property inside, the owner managed to "negotiate" a 30-minute stay of execution. This allowed him to remove money stored in the restaurant's vault. That "negotiation" cost him 20,000 rubles ($256).

Others say they realized they had a target on their backs, and had been fighting a rearguard campaign for several years. Konstantin Mikheyev, aide to entrepreneur Anna Azidi — who owned six pavilions near Kropotkinskaya metro station — said his team had been in a legal battle with City Hall since 2013. City authorities had consistently argued that the pavilions were illegal. But 18 months ago, the court ruled in favor of the businessman.

Moscow officials have repeatedly appealed the ruling. Another court hearing has been scheduled for later in February. Until then, an injunction supposed to prevent demolition was in force, said Mikheyev.

The bulldozers apparently ignored the court injunction, and by midday of Feb. 9, three out of the six pavilions had been destroyed.

City Hall disagrees. "The demolished pavilions were built in violation of city regulations, they were built on different utility lines and there could be many negative consequences," says Alexei Nemeryuk, head of the city's department of trade.

Another bureaucrat, Alexei Ionkin, representing the city's real estate inspectorate, argued that shop keepers had only been allocated land slots for temporary structures. "They erected capital buildings while they weren't allowed to, and that's why we've deemed them squatter settlements," Ionkin said.

But how long is temporary? Some of the buildings were built 25 years ago. According to Alexei Navalny's anti-corruption foundation colleague Georgy Alburov, most of them were registered in cadaster as capital buildings, which suggests the authorities were aware of the issue and considered it perfectly legal for decades. This, after all, was the way that business was done in Russia during the '90s: With connections and corruption, it was easy to obtain genuine property rights for anything.

Navalny argues that the store owners, many of whom are bona fide title holders, are the only ones who have suffered. Corrupt officials, who let the construction happen and turned a blind eye over all the years, have been left alone, he says. 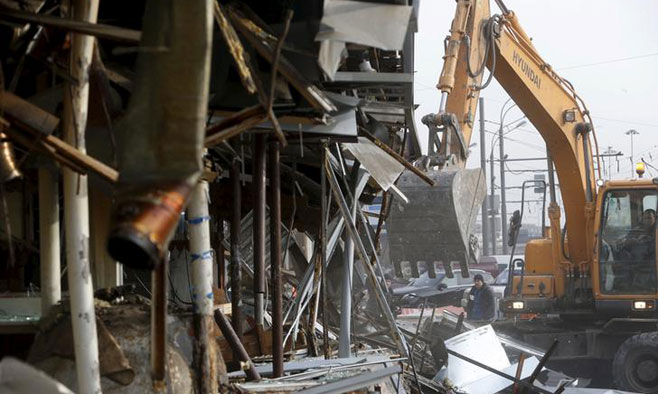 700 bulldozers were deployed to demolish 97 buildings throughout Moscow. Although the demolition was allegedly scheduled during the night to avoid inconveniencing commuters, traffic around the sites was disrupted.

The official position of Moscow authorities is that temporary constructions are inherently dangerous. Since July 2015 they have also had amendments in the Civic Code to back up their arguments. These amendments give municipal authorities the right to demolish structures "built alongside utility lines" without any additional legal moves.

But many of the entrepreneurs have documents that demonstrate full legal ownership of the properties, proper leasing of the land, and registration in the official public registry. In other words, they are the exact opposite of squatter settlements. "Most of the owners of demolished pavilions had all the necessary paperwork," says Alexei Petropolsky, a lawyer.

Petropolsky describes the authorities' position as "absolute legal arbitrariness." "City Hall is simply not permitted to demolish anything without a proper investigation and a court ruling," the lawyer said. Moreover, if a construction is in place for more than three years, and during these three years the city government has made no legal claim, it has no right to sue, he says.

What Does It Mean for Business?

According to City Hall's own figures, Sobyanin's "night of long shovels" may have left 2,000 people out of work. It also sent an obvious message to all small businesses in Moscow: There are no documents or court rulings that can protect your assets from being destroyed by those in power.

Entrepreneurs polled by The Moscow Times indicated a reluctance to do business on such shaky conditions. Head of City Hall's department of trade, Alexei Nemeryuk denied the authorities should be concerned about a possible business exodus.

"We're sending the opposite signal," he argued. "If you oblige the law, you can work here."

But the figures do not lie: Small businesses are shrinking in Moscow. In the first nine months of 2015, the number employed in small and medium enterprises dropped by 45,000 when compared to similar figures from 2013 (down from 1.54 million). And that, according to economist Natalya Zubarevich, means that operating conditions for such enterprises are deteriorating.

Moscow's bureaucrats could be forgiven for not noticing.

Taxes collected from those working under the simplified tax system made up just 3.13 percent of total city revenues in 2015 — 1.7 trillion rubles overall. This means that small business revenues brought in just over half of what the city spent on urban amenities, like benches and flowerbeds.

The revenue contribution of small street retailers to the Moscow's budget is insignificant, says Zubarevich. Even so, the message is not a good one at a time of recession.

"Economic crisis is an inappropriate moment for such operations," she said.

For Sergei Rak, chairman of the consumer market committee at the Moscow branch of the small business association Opora Rossii, the decision not to consult properly was "typical" of City Hall. "They make a decision, and they carry it out, no matter what reasons there are against it," he told The Moscow Times. 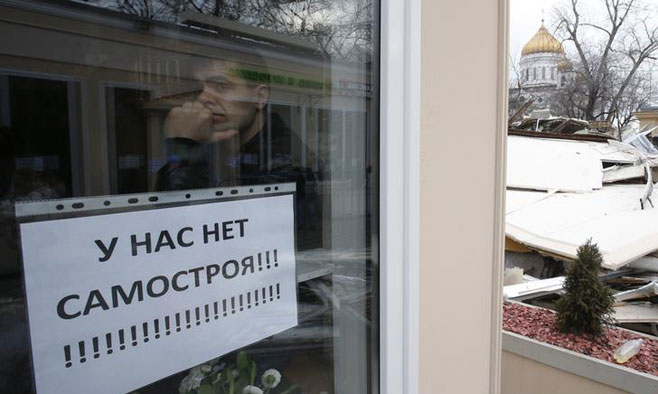 "We are not a squatter settlement!" Owners of pavilions in danger of demolition claim that they hold the legal paperwork necessary to conduct business.

What Is to Come?

Officials have said that no new retail outlets will be built in place of the demolished structures. They refute speculation that the demolition was a cover to clear out lucrative spots for friendly businessmen.

But neither, it seems, are authorities planning to offer new retail spaces to the owners of demolished pavilions. "They can rent something themselves — the rental market is thriving now," Nemeryuk said. City Hall have also said no preference will be given to the former owners in future kiosk auctions either.

In theory, the store owners were due compensation, but City Hall is playing hardball. The owners were entitled to cash only if they voluntarily canceled their property rights, authorities say. "No one from the list did it, as far as I know, so their pavilions were demolished forcibly," said Ionkin.

Both City Hall's department of trade and the real estate inspectorate told The Moscow Times that the operation to remove "illegal" structures was not yet over. They were, however, unable to provide an exact number of structures that had been earmarked for construction, nor give a date that bulldozers would next take to the streets.

In the meantime, some of the owners of demolished pavilions say they are ready to go to court to contest the legality of the demolition.

They are likely to get some support from ordinary Muscovites. "The situation in Moscow is very tense as it is, with authorities pushing unpopular measures like paid parking zones and the endless replacing of sidewalks," said Natalya Zorkaya, expert at the independent pollster Levada Center.

But this is unlikely to turn into revolutionary fervor. It will, one suspects, take a great deal more to shake Russians out of a default position of falling into line.

On Tuesday morning, many Muscovites arrived at their metro stations to find them looking radically different. Overnight, innumerable small kiosks had...
MILITARY PRESENCE

In recent weeks fighting has intensified between Ukraine's army and pro-Russian separatists controlling two regions in the country's east.