Moscow street retail, which underwent a major shake-up headed by Moscow Mayor Sergei Sobyanin four years ago, faces another transformation this year as the rules for entrepreneurs drastically change once again.

Several thousand kiosk owners have found themselves in a gray area in terms of the law this summer, according to experts. Their rental contracts with City Hall expired in April, and Moscow authorities are apparently in no rush to renew them under the new rules.

Some of the kiosks have already closed down, while others continue to operate despite their rental agreement having expired, and are therefore under the constant threat of eviction.

The plight of kiosk owners hit the headlines late last month when Russia's biggest strawberry farm, Sovkhoz Imeni Lenina (Lenin State Farm), located just outside the capital in the Moscow region, announced that most of its crop would rot in the fields this year because city authorities had banned it from selling the produce at Moscow street stalls.

Without access to Moscow's millions of consumers, the farm was forced to cut its daily harvest to less than 40 tons of strawberries compared to 102 tons per day last year, according to the Interfax news agency.

Pavel Grudinin, the farm's director, said multiple appeals to lift the restriction had been unsuccessful.

"At first we were told it was the Federal Anti-Monopoly Service (FAS) that imposed the ban," Grudinin told The Moscow Times last week.

Spokespeople for the FAS denied they were responsible, saying there was no ban. "City Hall is responsible for assigning spots for street trading," Rachik Petrosyan, head of the Moscow directorate of the FAS, told The Moscow Times in e-mailed comments last week.

"In a letter to the Moscow department of trade and services we explained that the FAS supports any City Hall decisions concerning street-trading spots as long as they are within the law and don't interfere with fair competition," Petrosyan said.

After days of going back and forth between the FAS and the department of trade, Grudinin found out that the final decision was up to City Hall.

"To let us sell the berries they needed to adopt a specific act. But first they were editing it, then the mayor went on vacation," said Grudinin, adding that the situation remained unresolved.

"So this year we recommended [the farm] to either participate in a tender, or apply to the FAS and request preferential treatment," the Expert.ru news website cited Nemeryuk as saying late last month.

Meanwhile, the strawberry season on the farm is gradually coming to an end. "We can pick and sell berries for 30 days a year. This year we have already lost 15 days," Grudinin complained.

Next year the businessman plans to start sorting out all the formalities much earlier than this year, when he began the process in April. "I'll go to the department in December — I need clarity as early as possible in order to work," he said.

At the beginning of his term in 2011, Sobyanin became widely known for his ruthless campaign against kiosks, which had been criticized by some for years as being unsightly, unhygienic and unregulated. The new mayor promised to transform the chaos into some kind of order.

Sobyanin and his team inspected the city's 20,000 kiosks and closed more than half of them. New regulations were established for the 8,000 left functioning.

Under those rules, in order to set up a kiosk, the owner had to rent a site for it via a tender and then buy at their own expense a pavilion built in accordance with City Hall's strict standards. Site rental contracts were valid for three years.

This year, the rules changed again — and came as a shock to kiosk owners who had bought the buildings just three years ago.

"We will rent out the kiosks themselves [via auction], not the land spots," Vladimir Yefimov, head of the Moscow department of city property, was cited on the department's website as saying in January.

This would be much more convenient for the owners, he said.

"The kiosks will be ready to work in right away," he said. "And the contract will cover five years instead of three."

Yefimov said at the time that almost all of the 8,000 contracts with kiosk owners were due to expire this year anyway, and that the city authorities would renew them in time. But there was no suggestion of City Hall buying the existing kiosks off their current owners, leaving it unclear what the entrepreneurs should do with the pavilions they bought three years ago.

The city would also increase the number of kiosks to 8,700, the department said on its website.

From Bad to Worse

Amid appeals and pledges to support small- and medium-sized enterprises, the authorities have actually worsened conditions for them, some experts say.

"The attitude toward street retail is much harsher in Moscow than in other Russian regions," Sergei Rak, chairman of the consumer market committee at the Moscow branch of the small business association Opora Rossii, told The Moscow Times last week.

"The owners of kiosks are in a completely different situation to all other entrepreneurs," Rak said.

According to him, 4,000-5,000 kiosks are currently working illegally now because their contracts expired on April 1 and no procedures were in place for their owners to renew the agreement.

Some 200 existing kiosks were due to be replaced with new ones by City Hall and rented out by the end of June, but only 18 of them actually were, according to Rak.

Rental agreements for another 40 ice cream kiosks will be sold via tenders on Aug. 11 and 12, the department for competition policy said in an online statement Monday. They will be installed in all 10 administrative districts of the city, complete with freezers and other equipment already installed.

Rak calls the process de-privatization. "It's easier for City Hall to control kiosk owners when the property doesn't belong to them," the expert said.

Renting a kiosk will cost entrepreneurs a five-figure sum of money each month, Rak said. The starting price at an auction for a kiosk in the city center is generally about 30,000 rubles ($535) a month, but can reach 100,000 rubles ($1,786) or more, depending on the kiosk's location and accessibility.

On July 1, an additional sales tax came into force, payable every quarter by everyone involved in trade in Moscow.

According to Rak, in imposing the tax, the authorities wanted to streamline conditions for everyone, but the outcome could be just the opposite.

"Tax rates are fixed — at five-figure numbers — for shops smaller than 50 square meters," he said.

"For bigger premises, the tax rate decreases in inverse proportion to the number of square meters. So it's the kiosks that will suffer the most," he said.

Rates published on the website of the Moscow department of economic policy and development confirm his assessment. 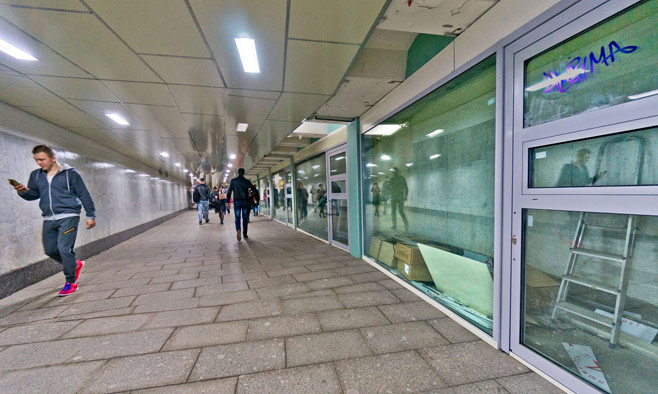 Under the new rules, City Hall is putting up its own standard kiosks, such as these underneath Pushkin Square.

Those who can prove that they have paid all other applicable taxes will get the sales tax subtracted from the overall amount of tax they pay, but that won't lighten the burden for entrepreneurs who sell season sensitive products like ice-cream, fruits etc., said Rak.

"In the winter, the sale of ice cream brings no profit [so the owner will not pay profit tax] but the owner of the business will have to pay the sales tax anyway" and will not be eligible for a refund, the expert said.

The only traditional kiosks that have managed to escape the sales tax are newspaper and magazine kiosks. They were made exempt from the sales tax, the city's department of economic policy and development announced last week on its website.

The exemption was made after the Industry and Trade Ministry filed a request with City Hall last month asking for press kiosks to be immune from the tax. Ministry officials believed that the tax could cause most of them to close down, the Izvestia newspaper reported at the beginning of June.

According to Rak, there are almost 3,000 kiosks in Moscow selling newspapers and magazines.

Another category of kiosks that authorities have said won't be exposed to sales tax is the new generation of automated kiosks that are essentially giant vending machines that sell food and drinks, and accept both cash and credit cards. The Vsyo Sam ("All by Myself") chain of automated kiosks was welcomed with enthusiasm by city officials when it was launched in the city center last June.

There are currently nine automated kiosks in the city. The company plans to set up another 200 by the end of the year, Vsyo Sam representatives told The Moscow Times last week.

Yefimov of the city's property department said that Vsyo Sam vending machines might replace some of the traditional kiosks, the department's website reported in January.

Some media reports have speculated that the company gets preferential treatment from City Hall because the chain's owner has ties to it.

According to the business news website Ko.ru, in addition to the lucrative vending machine business, the company also won the tender to build the 200 traditional kiosks that were supposed to be auctioned and rented out to entrepreneurs in the center of Moscow.

A request for comment about the future fate of street trading filed to the Moscow department of trade and services went unanswered by the time of publication.

According to Rak, one of the department's goals is to increase its control over street retail. He considered the theory that it is all a conspiracy by big retail chains to get rid of street trading unlikely.

"Then again, you sometimes hear Nemeryuk [head of the Moscow department of trade and services] say something like 'Why do you need a kiosk there, another Perekryostok supermarket just opened there,' and it gets you thinking," Rak added.

He compared Moscow to St. Petersburg, where small enterprises seem to have won. In St. Petersburg, Rak said, plans to reduce the number of street kiosks only led to their increase after a tough battle between businessmen and city officials.

"There are now three times more kiosks than there used to be," the expert concluded.