Russian officials are touting a new wave of privatization to fill the hole in the government's finances caused by the slumping oil price.

With the cost of crude falling toward $30 per barrel early in the year, Finance Minister Anton Siluanov announced that 1 trillion rubles ($12.5 billion) could be raised by privatization over the coming two years. Ministers have proposed selling stakes in Rosneft, the giant oil firm, and the country's two largest lenders, Sberbank and VTB.

It is not clear whether the sales will go ahead. Officials have planned to sell many of these stakes for years, but delayed due to poor market conditions. Stock prices remain at rock bottom, meaning the government will make less from their sale. But the economic crisis may have forced the government's hand.

Meanwhile, the government faces a shortfall of 3 trillion rubles ($37.5 billion) this year — close to one-fifth of the budget — if oil prices remain at less than $30 per barrel, Siluanov said in a television interview in mid-January, Reuters reported.

Privatization could help avoid raising taxes, cutting spending or draining fiscal reserves, but it is unlikely to fill the hole. Hundreds of small state enterprises are slated for sale in 2016, but the state property management agency, Rosimushchestvo, has estimated revenues of only around 33 billion rubles ($410 million).

To make an impact, the government would have to sell big assets. These include a 19.5 percent stake in Rosneft, which would garner around 475 billion rubles ($6 billion) at current share prices.

But with Russia in recession, its economic outlook grim and sanctions imposed over the Ukraine crisis squeezing investment, the government might have trouble finding investors keen to buy, said Alexei Devyatov, chief economist at UralSib, a bank. Sberbank, VTB and Rosneft all appear on Western sanctions lists.

That means the government would likely have to finance the process itself, analysts said. Under such a scheme, major state and private lenders, along with Vneshekonombank, the government's development bank, would either purchase stakes or loan money to other buyers. The state loaned these banks hundreds of billions of rubles to prop them up following the imposition of sanctions and collapse in oil prices in 2014. More could come, said Maxim Osadchy, head of analysis at Corporate Finance Bank in Moscow.

"State money will fund this comical privatization," he said. 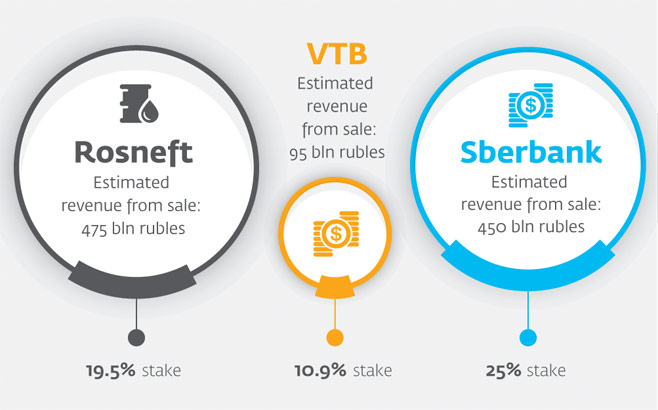 That would mark a major change in what privatization would do for the economy, said Natalia Orlova, chief economist at Alfa Bank in Moscow. In the past, privatization was intended chiefly to inject private expertise and improve efficiency at clunky state enterprises, which still dominate Russia's economy. Now, it's an emergency measure to finance the budget deficit, Orlova said.

But while it may not aid good governance, such a privatization has its benefits. State banks may prefer buying stakes in privatized companies to giving out loans at a time when a recession is making clients less creditworthy. "It would be a better protected investment," said Orlova.

Also, it would help certain people enrich themselves through kickbacks.

"The more such cash flows the government generates, the more money ends up in officials' pockets," said Osadchy. With corrupt officials worried that those flows are waning due to the recession, the opportunities supplied by privatization are doubly welcome, he added.

Backing those fears is a report into sales of government assets over 2010-14 published last year by the Audit Chamber, a body that monitors state spending, which criticized regulation and oversight of privatization and a lack of competition at auctions.

Yet an upcoming privatization may still be successful. Rosneft and Sberbank have both remained profitable through the economic slump and would lure investors, said Oleg Vyugin, chairman of the board at MDM Bank. Moscow appears to be funneling new energy into diplomacy in Ukraine, and if sanctions are eased later in the year then sales could go better than expected, he said, while Asian investors could also participate if Westerners choose not to.

But Devyatov was skeptical of privatization proposals. In previous years officials promised more sales than they delivered — according to the Audit Chamber, delays meant the state earned only 21 percent of planned revenues from asset sales over 2010-14.

The government will likely try to muddle through this year, Devyatov said. Privatization is "a forced measure that will be saved for the last, last case," he added.

The closed town of Severomorsk, population 50,000, houses the Russian Navy’s Northern Fleet in the Arctic Circle.
evading the system

U.S. Funds Software for Russians to Slip Past Censors

The U.S .government-backed Open Technology Fund estimates that some 4 million users in Russia have received VPNs from the firms Psiphon and nthLink.
Spy case