Onur, a Turkish resident of Moscow, described recent days: "Many friends of mine already left Russia because of fear. It is hard for us to go outside and be identified by locals as 'Turkish.' Police came to many Turkish expats' houses to find ways to send them out of Russia. Many good Russian people started to [protest at] the Turkish Embassy. Suddenly, they forgot everything: they forgot their vacations in Turkey, their clothes that were made in Turkey, the vegetables, foods [that came from Turkey]. Everything which belongs to Turkey started to seem for them dirty, even their Turkish friends."

Onur, who is in his 20s and did not want his surname published, worked in Moscow for a major Turkish construction firm. He was one of tens of thousands of Turkish citizens in Russia caught up in a backlash after Turkey shot down a Russian warplane over the Turkish-Syrian border last month, resulting in the deaths of two servicemen.

The downing, and Ankara's refusal to apologize for it, has seen the Russian state turn against Turkey's economy, and the students, employees and businesspeople that are part of it.

Turkey says Russia's Su-24 bomber strayed into its airspace on Nov. 24 and ignored requests to leave, but Moscow denies this and says the shooting was illegal. President Vladimir Putin called the move a "stab in the back by accomplices of terrorists."

Taking that cue, state media have vilified Turkey's leaders and Russian officials have portrayed the country as a den of terrorists and dangerous for Russians. Authorities promised sweeping economic sanctions, while making little effort to stop the Turkish Embassy in Moscow from being pelted with rocks and eggs.

One measure was to end visa-free travel for Turkish citizens from Jan.1. But Russian migration officials lost no time, and began touring the country checking construction sites, trade fairs and homes. Tens of people were deported, and more were denied entry to the country or subjected to checks, according to the Turkish Embassy and Turks living in Moscow.

Adding to the atmosphere, lawmakers suggested dropping university scholarships for Turks and banning Turkish soap operas. The Education Ministry said Russian exchange students in Turkey would be repatriated as soon as possible. A Russian-Turkish research center at Moscow's Library for Foreign Literature announced it had closed for "reasons unknown to us," and its lectures, language classes and conferences would be canceled.

The very word "Turkish" became so taboo that a restaurant chain called "Turkish Tandir" in the city of Saratov decided to rebrand and drop the first word. Local news agency Sarinform published pictures of the restaurant's street sign, with the word "Turkish" covered by a strip of tarpaulin. 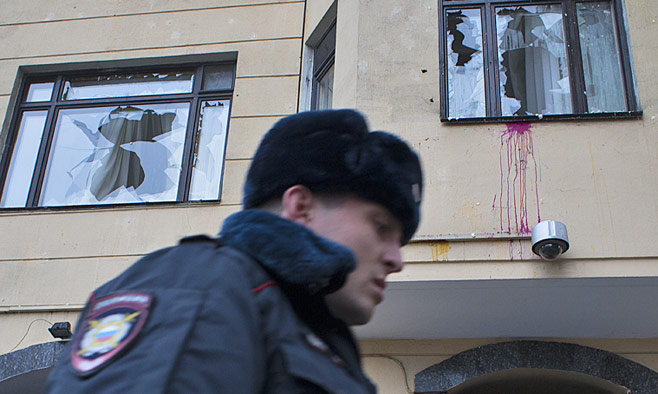 A Russian policeman walks past the vandalized Turkish Embassy, with shattered window panes and paint splatters in Moscow, Russia, on Wednesday, Nov. 25, 2015.

The result was tension and fear in the Turkish community. Most Turkish people contacted by The Moscow Times refused to speak, even anonymously, to a reporter. Often, only Russian friends and family were willing to share their experiences.

"People are scared," said one woman with a Turkish boyfriend, who did not want to be named. Expat chat forums have filled with reports of police knocking on Turkish residents' doors, she said.

Yashar Niyazbaev, a reporter for Turkish news agency Cihan in Moscow, shared some of the stories he had heard and investigated. In one, migration officials made a late-night call on an apartment occupied by Turks, asking questions and taking passports with them as they left. In another, migration and drugs investigators with dogs and cameras raided the residence of Turkish students of nuclear physics. These are Turkey's brightest young minds, and "it was a humiliation," he said.

The biggest fear is over visa checks. The woman with the Turkish boyfriend told of a friend who was taken to a side room at the airport for 90 minutes of polite but detailed questioning. One friend of Niyazbaev's, a man who had taken out a loan to fund a business venture in Russia, was denied entry despite having a valid visa.

In the week after the Russian warplane was downed, almost 100 Turks were refused entry at Russian airports, said Orhan Galigil, press advisor at the Turkish Embassy. More had been deported from inside the country, and many Turkish students, around 1,000 of whom study in Russia, according to media reports, had turned to the embassy for assistance.

After a delay of a few days, the Education Ministry said that Turkish students in Russia would face no reprisals and universities should act to ensure their safety, the Interfax news agency reported. The Federal Migration Service did not respond to a request for comment.

Worst affected were mixed families with children, who could be split by the visa crackdown and who are already seeing their Turkish or half-Turkish kids being picked on in schools, the woman with the Turkish boyfriend said.

A similar fate is being shared by mixed families in Turkey, where an opposite media campaign has been rolled out that dredges up a history of clashes between Russia and Turkey and blames Russia both for violating Turkish airspace and the harsh response that followed.

"The situation is tense," said Maria Telli, a Russian woman who lives in Turkey with her Turkish husband. Some children were being bullied for their Russian connections, she said. Many families planned to travel to Russia for New Year's, but faced the question, "will they let in our Turkish husbands?" 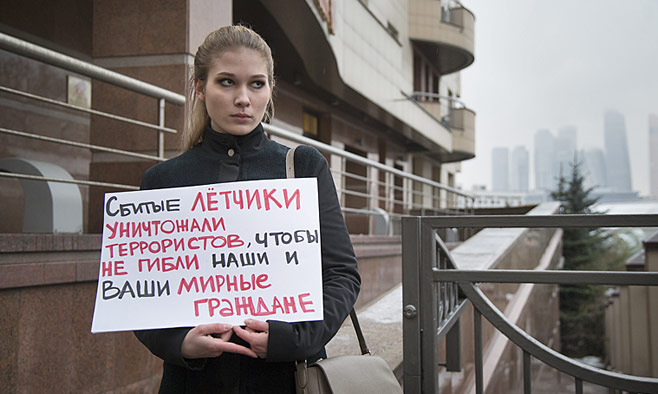 A woman holds a poster outside the Turkish Embassy in Moscow. "The pilots that were shot down, were fighting terrorists, to save your and our civilians."

The rising tension came as Russian authorities unfurled a raft of economic sanctions against Turkey.

Charter flights between Russia and Turkey were banned and tour agencies barred from selling travel packages to the county, undermining the flow of Russian tourists, 3.3 million of whom visited Turkey last year according to official data. Russians were meanwhile discouraged from visiting the country for safety reasons.

The government published a list imports from Turkey to be banned from Jan. 1 that included tomatoes, cucumbers, broccoli, oranges, grapes, apples, pears, poultry products, salt and more. Hundreds of tons of goods were already stranded at the border, according to Reuters news agency.

Turkish companies will be restricted from winning new business in Russia, while curbs on hiring Turkish citizens will be imposed and the maximum number of Turks allowed to get work visas will decrease sharply next year.

The moves — drawn from an arsenal of measures frequently deployed by Moscow against political antagonists — reverse rising friendly relations between Russia and Turkey and growing trade. Turkey had benefited from Russian efforts to find new suppliers following sanctions on Europe and other Western countries. The two countries aimed to more than double their trade turnover to $100 billion by the end of the decade.

Estimates of the damage to Turkey's economy range from around $4 billion to $12 billion, or 0.5-1.6 percent of gross domestic product. Russia's economy will likely lose less in cash terms, but its citizens will suffer from higher food prices and less choice and quality in supermarkets, as well as the loss of Turkey as a cheap holiday destination.

Dr Mamdouh Alkhatib, who heads the Turkey committee at the Moscow Chamber of Commerce and Industry, cautioned against excessive negativity. Russian authorities were acting "rationally, not emotionally," he said, and the measures adopted appear more significant than they are, particularly for Turkish expats in Russia.

Active contracts have not been canceled, or the employment contracts attached to them revoked, he said. Turkish business in Russia will be most affected by the loss of new work, but with Russia mired in an economic crisis this was sparse regardless. By the time Russia's economy has picked up, the political tension may well have subsided, he added.

Alkhatib said Turkish businesspeople were minded to stay and safeguard their businesses. Niyazbaev also said Turks were not rushing for the exit, but simply feared they would be forced out by migration services.

But many are already leaving, either voluntarily or because their jobs are being cut. Some 70,000-80,000 Turks live in Russia, of whom 10,000 are in Moscow, according to the embassy's Galigil. The lower quota on work permits for Turkish citizens could see that number fall by tens of thousands, and it is unclear if and when the situation will ease.

Onur, the man who described recent life in Moscow, left Russia on Monday after three years in the country. He said he feared deportation for bogus violations found in his paperwork and was intimidated by popular anger stirred up by shock jocks.

"I have to leave now. I have flight this night and leaving all good friendships, my love, and life behind," he wrote, before heading to the airport.

"I wish everybody good luck."