After the murder, an unofficial memorial was set up on the bridge, which was where Nemtsov was shot last February, with people regularly bringing flowers, candles and posters to pay their respects to the slain activist. 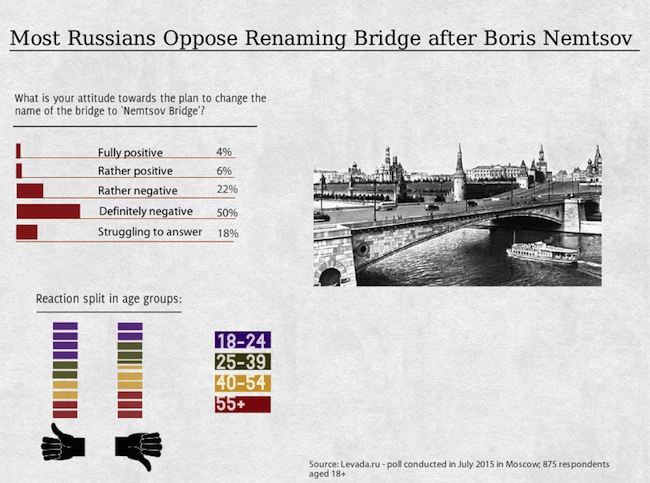 According to the center, 50 percent of Russians polled said they were strongly against the proposal, while 22 percent opposed it in part. Only 4 percent fully supported the initiative.

As previously reported by The Moscow Times, a proposal to set up a memorial on the bridge submitted by Nemtsov's party RPR-PARNAS, was rejected by the Moscow City Duma earlier in July.

Poland's Senate speaker said Monday that Russia's authorities have denied him entry into the country for the funeral of slain Kremlin critic Boris Nemtsov...
news

Two suspects have been detained over the killing of Boris Nemtsov, Russia's most senior security official said, a week after he was shot dead near the Kremlin...
various causes

At least six newly mobilized Russian soldiers have died since the start of the country’s “partial” mobilization for the war in Ukraine...