One of the most famous circuses in the world, Canadian troupe Cirque du Soleil has brought their show "Quidam" to Russia.

"Quidam" tells of a young girl, who feels abandoned by her parents and escapes from reality into a new imaginary world.

The title of the performance, which comes from Latin for "nameless passerby," refers to one of its characters, a person without a head who always carries an umbrella and keeps appearing on the stage throughout the performance. Never involved in the action, he just passes by, glancing at some acts, and then disappears behind the scene.

This "Quidam" signifies solitude, the problem that the main character faces.

As with all Cirque du Soleil shows, "Quidam" is a combination of circus-style acrobatics and theater. The extravagant costumes, thrilling music and minimalist scenery help the audience feel the atmosphere of the world created by theater director Franco Dragone, famous also for his other Cirque du Soleil Show "Allegria."

The scenery consists of only a red curtain in the center of the arena. The red color is symbolic to the storyline. In the performance Zoe's mother is wearing a red dress and Zoe is holding a big red balloon at one point. Smith said the red color symbolizes love and strength. And the red balloon, finally released by the girl, signifies the act of liberation of the soul.

There is a story behind each acrobat act in Cirque du Soleil's performance. The "Ariel" hoops act, closing the first part of the performance, is meant to show the strength of the women. "We went to war and we were wounded but we are still alive and strong," said the Brazilian acrobat Danila Veira of the meaning of the act. She said it took her 10 years of training to get to the correct technical level to perform the act. 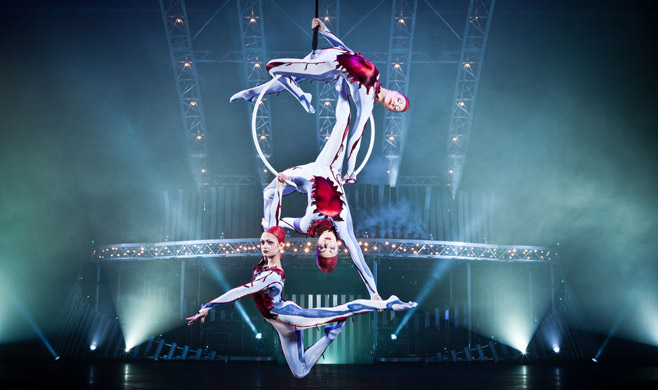 'Quidam' mixes acrobatic acts and clowns in its story about a young girl.

Veira came to work to Cirque du Soleil from a traditional circus and said the biggest difference is the commitment to the show. "The costumes, the makeup, the show in total, they take it very seriously how they present it," she said.

They also she said supported the creativity of the artists, as each acrobat can perform a solo. Veira has a 32-second solo in the act.

All the circus acts in Cirque du Soleil are performed by the acrobats without any safety lines. "We are aware of the fact that what we do involves danger, that's why we train so hard to perfect things to the point you feel safe to do it," said Veira.

"Routine is the enemy of creativity. But for acrobats they need routine. That's what keeps them safe," said Smith.

The show has 45 performers from 15 countries, which Cirque du Soleil says is part of their strength. "By embracing the difference, we are learning about other cultures. We all become so much richer because of this experience," Smith said.

As the story progresses in "Quidam," the more dangerous the acts become.

One of the most breathtaking acts is the "Statue" performed by two Russian artists, Natalya Pestova and Alexander Pestov. The acrobats shows incredible flexibility and strength, balancing each other and achieving seemingly impossible positions.

The intervals between the acrobatic acts are filled with funny clowning acts, often involving audience participation. However, this often draws away the audience from the main storyline.

Jean-Philippe Viens is part of the spectacular Spanish web act that performs acrobatics on ropes and a skipping rope act.

"The whole point of 'Quidam' is not the acrobatics, which is amazing as well, but what makes it different is that we give emotions," said Viens. "I like the show with a soul and for me 'Quidam' has soul."

'Quidam' plays in St. Petersburg April 29 to May 4. cirquedusoleil.com.