A Russian toy store has launched an advertising campaign that shows children interrogating their parents and urging them to take their kids "to Lubyanka" — apparently playing on the location's reputation as the feared former home of the Soviet KGB.

The video ads — initially uploaded in three segments to YouTube, according to news reports with screenshots — feature two children upping the pressure on their parents in a mock interrogation session. 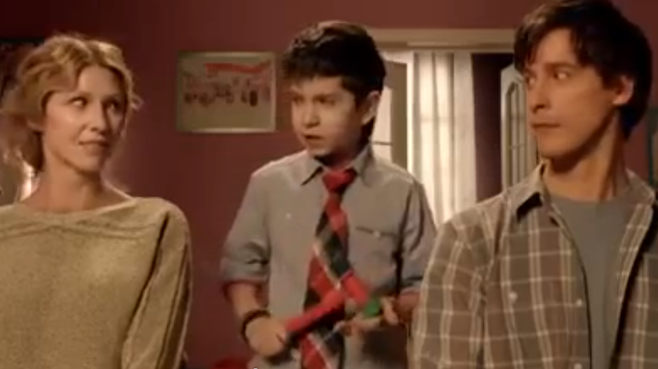 A screenshot from a video advertisement for a Russian toy store.

"So how much time do you allocate to your children?" an angry boy dressed in a suit asks his parents seated on two chairs in front of him in one video.

"Well," his obviously nervous mother mumbles nervously. "Whenever I have a free moment."

"So you can't even respond to such a simple question!" the boy bawls. "This is not funny, children are the country's future!" he says.

"And the future should be a happy one," his sister pipes in while taking a selfie with an iPad.

"Good parents take their children to Lubyanka," the boy then tells viewers. " Are you good parents?"

The segment then closes off with the logo for the reopening of the legendary Detsky Mir toy store on Lubyanka as the Tsentralny Children's Toy Store.

A second video opens with the father nervously saying: " I don't know anything."

"We warned you," the boy responds. "You have left us no choice. We'll have to up the pressure," he says, threateningly holding a wooden hammer.

Following a signal he winks at his sister, who instantly starts making a scene and pretending to cry.

"Stop it, this is illegal!" the father says.

"I can't bear this!" her mother pleads on her knees.

"I need a lawyer," the father says, after which the toy store's logo is shown.

According to a Meduza news report, the videos have since been taken offline but copies of the video ads — of which there are reportedly three — are still available on the Internet.

Lubyanskaya Ploshchad was home to the KGB headquarters and a prison in Soviet times, while the same building is now used to house its successor agency, the FSB.

During the height of the Stalinist terror, thousands of political dissidents were interrogated and tortured at Lubyanka and often forced into making staged confessions.