Russia wants to join the global club of naval powers wielding large and powerful aircraft carriers, but such a project is decades away and would require major expansion of Russia's industrial capabilities and changes to the way the country uses its navy.

Undaunted by the challenges, the head of Russia's navy, Admiral Viktor Chirkov, said this month that Russia would build a new aircraft carrier.

The design prompted many to write off Russia's intentions as unachievable, but analysts said Russia could do it if the Defense Ministry wanted, provided the industry receives proper investment in the meantime.

"One of their biggest initial problems is that Russia doesn't have any history in building aircraft carriers because the carriers the Soviet Union built were all built in Ukraine," Dmitry Gorenburg, an expert in the Russian navy at the Virginia-based CNA Corporation told The Moscow Times.

Russia currently has only one aircraft carrier, the Soviet-built Admiral Kuznetsov.

With China building its own supercarrier, and the U.S. building a new fleet of even bigger supercarriers, Krylov boasts that it has early designs for a carrier that "can carry 100 aircraft on board," surpassing all competitors, according to Defense Ministry television news agency Zvezda.

Valery Polovinkin, an advisor to Krylov's general director, told Zvezda in February that the company's design also features a nuclear reactor — a first for a Russian aircraft carrier — and cutting-edge electronics and missile systems. 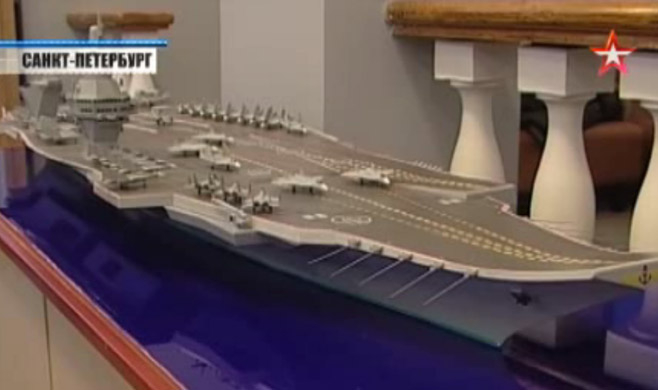 A screenshot of a TV Zvezda video showing the model of the proposed aircraft carrier.

He said the design features such a sleek hull that drag — the resistance created when a ship moves through the water —  has been reduced by as much as 20 percent. Compared to what, he did not say.

The design's most curious feature is the inclusion of a Soviet-style ramp at the end of the flight deck and an aircraft launching system known as a steam catapult. These are tricks to help planes launch off a short runway, and aircraft carriers usually have either one or the other.

Krylov's press service told The Moscow Times that there was nothing new to add about the project that Zvezda has not reported, but stressed that its design was still an early stage concept.

The ambition represented by Krylov's concepts show that Russia plans to expand beyond its current and former naval doctrines.

Both the U.S. and the Soviet Union built aircraft carriers, but their role within their respective navies were vastly different and were shaped by the countries' strategic goals and limitations.

Separated from the world by two great oceans, U.S. aircraft carriers have been Washington's primary means of projecting force since World War II.

This means that a U.S. carrier is an offensive weapon. Its steam catapult systems allow heavy F/A-18 Hornets with full bomb loads to take off and hit targets deep in enemy territory.

The heavy hitting against the U.S. navy was expected to come from land-based aircraft, such as the Tu-22M3 supersonic bomber armed with anti-ship cruise missiles fired from a distance.

Part of this was a technical limitation. Using ramps instead of the more complicated and expensive steam catapults, ships like the Admiral Kuznetsov can only launch fighters with lighter air-to-air armaments. In this role, they are most effective when used against U.S. anti-submarine aircraft.

To make up for this weakness the Soviet carriers were outfitted with anti-ship guided missiles to pummel other surface vessels — hence the Soviets' official designation for the ships: heavy aircraft-carrying missile cruiser.

A U.S. supercarrier carries relatively light armaments, relying instead on the punch packed by its heavy fighters, and a screen of destroyers and other support vessels to protect it.

For the construction of a similar Russian supercarrier to make any sense, Russian naval strategy would have to be adapted to accommodate this type of vessel, provide them with exploratory missions far from home, and build them huge naval escort groups, said CNA Corporation's Gorenburg.

Russian shipyards may also lack the capacity to build a supercarrier.

The Soviets tried once before. In 1986, motived by national prestige, Moscow shirked its own naval doctrine and began construction on a supercarrier of its own.

Displacing nearly 70,000 tons of water, the Ulyanovsk was laid down at the Nikolayev 444 shipyard on the Black Sea, just as every Soviet carrier before it. 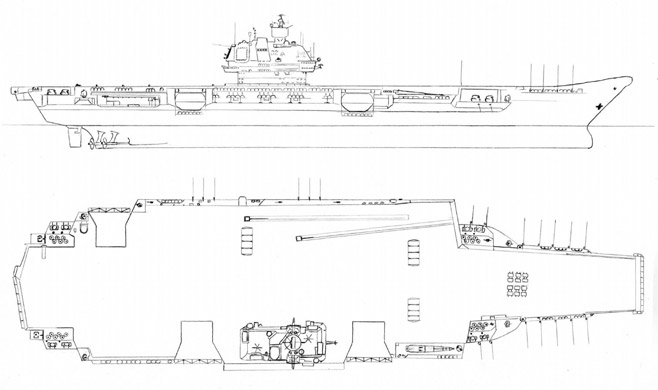 A diagram of the unfinished Soviet super-carrier Ulyanovsk.

But the collapse of communism torpedoed the project in 1992, and Nikolayev 444, with its vast experience in carrier building, found itself in independent Ukraine.

Without access to Nikolayev 444, "Russia wouldn't be able to build any naval vessel larger than 60,000 tons displacement or so," said Gorenburg.

Housing up to 100 aircraft, Krylov's design is much larger than the Ulyanovsk, which could only hold about 70 aircraft.

No Russian dry dock exists that can house such a large carrier. Either one would have to be built, or they will have to attempt to build two halves of the ship in different yards and then weld them together at Sevmash, Russia's largest military shipyard, which has a deep basin nearby that could work for such a task, Gorenburg said.

Russia has pursued two projects meant to familiarize its shipbuilders with the skills to eventually build a ship as complex as an aircraft carrier. But both have been disappointing in their own way.

One was the 1.2 billion euro ($1.3 billion) Mistral deal with France. Under the contract, France would build for Russia two Mistral helicopter carriers — similar to an aircraft carrier, only smaller — with Russian engineers helping and learning new construction techniques.

The contract allowed for Russia to build two more Mistrals under license in domestic yards, but the deal has stalled because of French unease at Moscow's actions in Ukraine, and Russia could go another way.

The head of Russia's United Shipbuilding Corporation said on Tuesday that the company is prepared to build a Russian-designed analogue to Mistral in Russian yards as soon as the Defense Ministry will finance it.

The second project Russia hoped to use to develop carrier building techniques was the modernization of an older Soviet carrier, the Admiral Gorshkov, for the Indian navy in 2004.

The Gorshkov was mothballed in the mid-1990s after a boiler room explosion crippled her. In 2004 India negotiated with Russia to receive the ship free of charge, with the stipulation it pay almost $1 billion to Russia's Sevmash to overhaul and modernize it.

Sevmash finished the project in 2013 and the cost of the refurbishment swelled to almost $3 billion.

Russia will have to move fast to take advantage of those skills before they are forgotten, but with Krylov's aircraft carrier design only in the conceptual stage, construction is years away, Gorenburg said.

The joint statement on Ukraine's conflict with pro-Russia separatists was the first since 2019.
moment of truth

Both the U.S. and NATO said they were prepared for any scenario following their responses to Moscow's demands.