LONDON — Sanctions on Russia over its actions in Ukraine have compounded the impact of oil's plunge but Moscow may have the financial buffers to hold out for two years without a change in policy.

European governments meet next week to review the sanctions, imposed after Russia annexed Crimea last March and threw its support behind pro-Moscow separatists in eastern Ukraine. The West's response centered first on financial and travel restrictions on key individuals but by mid-year it had effectively cut off overseas funding to corporate Russia.

Although there was skepticism at the outset, these measures have hurt, particularly combined with the parallel collapse in oil, Russia's major export. Their impact has far outweighed Russian counter punches to European agricultural imports or the cancellation of its South Stream gas export pipeline through southern Europe.

"The big hit to Russia has really come from the oil price but extra shrapnel has come from sanctions," said Chris Weafer, senior partner at Macro-Advisory consultancy in Moscow.

Many dispute U.S. President Barack Obama's assertion that Russia's economy is now "in tatters" — a jobless rate of just over 5 percent and total external debts of about 30 percent of national output are just two raw numbers that would make some European leaders jealous. But the fabric has been badly damaged.

Reeling from 50 percent tumbles in both oil prices and the ruble, output is forecast to contract by up to 5 percent this year, inflation is already well into double digits and corporate finance has all but seized up.

According to Thomson Reuters data, Russian companies have sold only eight foreign currency bonds totaling less than $5 billion since last March and none since November. That compares with 52 bonds worth about $34 billion in the prior 12 months. 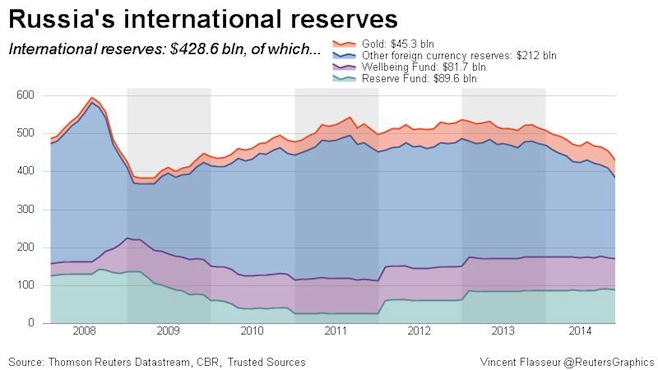 "Policymakers who devised these sanctions can be satisfied the intermediate goal has been achieved — if that goal was to damage Russia's economy," said Christopher Granville, managing director of London-based consultancy Trusted Sources.

"But the whole logic of the sanctions policy is that it leads to the ultimate goal of getting the Putin administration to rethink its strategy towards Ukraine."

President Vladimir Putin said in December that Russia's economy may have to suffer for two years under the "most unfavorable" of scenarios, which may indicate the time frame European Union countries must consider next week.

Any change in policy might also need the economic pain to worsen ahead of parliamentary elections late next year. Russian opinion polls show 70 percent think the government should continue its policies regardless of sanctions even though at least that many say they've been hurt by them.

EU officials told Reuters last week the summit will look at extending the existing financial sanctions and possibly widening them to include restrictions on holding Russian sovereign debt or shortening the maximum maturity for lending to Russian firms.

Beyond turning the screw in this area — and many reckon a decision may be postponed to the summer — analysts doubt the EU will go for the nuclear option of curbing Russian use of international payments system SWIFT.

Russia is the world's second-largest SWIFT customer after the United States and Russian bankers such as VTB chief executive Andrei Kostin have said "it would mean war."

Not only could such a move backfire by forcing debt defaults that hit Europe's banks, it would risk undermining Belgium-based SWIFT worldwide while provoking reluctant Russian retaliation.

Moscow's priority this year is to stabilize the budget and the ruble before inflation worries build on the street. As a result, analysts reckon any talk of the Kremlin forcing corporate debt defaults to hurt the West or insisting on debt repayment moratoriums are far-fetched at this stage.

"If a big corporate or quasi-sovereign goes down it will transform into a risk for the sovereign, and Russian authorities cannot afford that," Lombard Odier strategist Salman Ahmed said. "Any such default would be tantamount to sovereign default. This is how contingent liabilities become actual liabilities."

Calculations must then centre on how long Moscow can weather the existing storm without changing course on Ukraine, which in turn hinges on how it manages the cash reserves now needed to support its corporate sector and budget gaps.

"Already they are thinking about how to avoid exhausting their reserves because that is the cornerstone of stability and, to put it more bluntly, the cornerstone of power," said Granville at Trusted Sources. "Having that firepower is critical to the viability of Putin's ruling establishment as a whole." 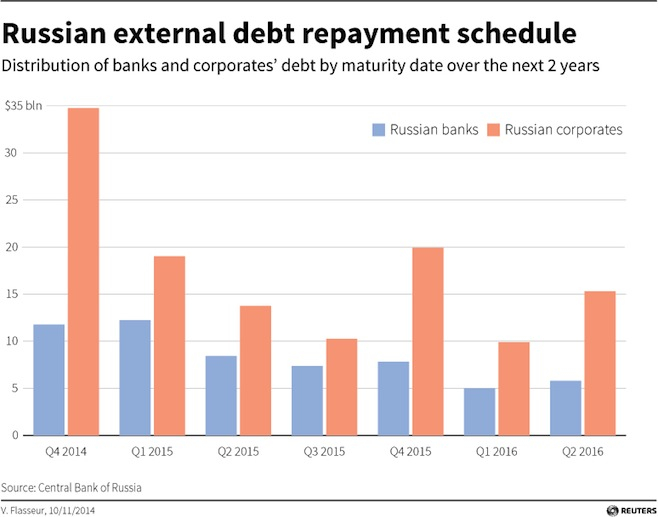 Russia's $388 billion cash hoard fell by almost a quarter over 2014, although the free float of the ruble that saw it fall so spectacularly late last year has reduced the amounts drained in support of the currency. Strip out the money in the government's rainy day funds, gold and IMF drawing rights and the number is estimated by some to be well below $200 billion.

External bank and corporate debt redemptions of some $130 billion to mid-2016 look like a drain on funds, although the real number may be less than half that given much of the debt is intra-company transfers or from overseas financing vehicles.

And a rebound in oil back toward $80 per barrel would change the whole picture. Central Bank chief Elvira Nabiullina said on Tuesday that the halving of the oil price had cost Russia some $160 billion in export revenue in annual terms.

As a result, two more years of these sorts of sanctions will be rough but not impossible for Russia.