Eighty percent of Kalashnikov's civilian weapons are exported, and under a distribution deal signed last year 200,000 rifles were supposed to go to the U.S. — the world's biggest market. Kalashnikov currently produces around 150,000 civilian weapons annually, showing the scale of its U.S. ambitions.

But these plans were cut short this summer, when the U.S. slapped sanctions on Kalashnikov to punish the Kremlin for its actions in Ukraine. The move killed the company's U.S. expansion plans, and an EU arms embargo installed in July then froze Kalashnikov out of the European market.

"The U.S. market was very important for us," Kalashnikov CEO Alexei Krivoruchko said at the press conference, where the struggling arms manufacturer presented a new branding and development strategy through 2020.

The company unveiled new logos across its these three product lines — Kalashnikov for the Russian and foreign militaries; Baikal for civilian hunters; and Izhmash for sportsmen — and promised to target new markets, including South America, Asia-Pacific and Africa, to offset the damaging loss of the U.S. civilian arms market.

The rebranding will play a critical role in Kalashnikov's plan, said Sergei Chemezov, head of Rostec, Kalashnikov's state-owned parent company. The strategy aims to increase revenue by a factor of four and expand production volumes to 300,000 units per year.

Kalashnikov hopes the new strategy will allow it to become the most popular weapons maker in the world by 2020.

This year, the company broke even, delivering over 140,000 weapons to customers across the globe. Last year Kalashnikov lost 1.7 billion rubles ($31 million), according to Moscow Defense Brief, a publication produced by the Center for the Analysis of Strategies and Technologies, a Moscow-based defense think tank.

As part of its 20 million ruble ($375,000) rebranding effort, Kalashnikov treated reporters and industry officials to a presentation that was part dramatic reading, part live-action film, and part flashy powerpoint.

Thin girls in tight dresses strutted around holding AK-47 ammunition magazine — which the company has embraced as a symbol of the brand — while a small orchestra played patriotic Russian wartime classics to set the mood.

As if the point wasn't made already, Kalashnikov's CEO was introduced by a sharp-looking young man wearing a Soviet officer's uniform from World War II. As he waxed nostalgic about the glorious triumphs of the Russian people, a lone spotlight illuminated his theatrical expressions.

When Krivoruchko finally took the stage to present the company's plan, he said the first priority was to raise production potential by modernizing aging production equipment. According to him, about 90 percent of the company's production infrastructure is outdated.

"Our total investment program stands at around 4.5 billion rubles [$85 million]. By 2020, we will increase maximum production capacity twofold," he said. This would bring annual production levels to 300,000 a year.

But branding continued to be the primary focus of Kalashnikov's new look, demonstrated by video presentations showing off the new logos in action.

After an animated historical short about the history of Russian weapons manufacturing, which seemed to prominently show the menacing geographic reaches of the hated NATO alliance, attendees witnessed the new Kalashnikov brand in action as an ultra-elite team of special forces operators mercilessly tracked down and disposed of a band of Dagestani terrorists.

Kalashnikov's other brands were shown in a more tranquil light, as everyday hunters and sportsmen toted their rifles around the great outdoors.

The great tragedy of this new marketing campaign is that it is perfectly suited to U.S. consumers that Kalashnikov can no longer reach. The military heritage and sporty utility of its products would resonate with the fiercely independent U.S. gun-owner community.

"Kalashnikov was invented for the people, in the name of the people," Krivoruchko said in conclusion, making the case that the weapons help people protect their sovereign rights. 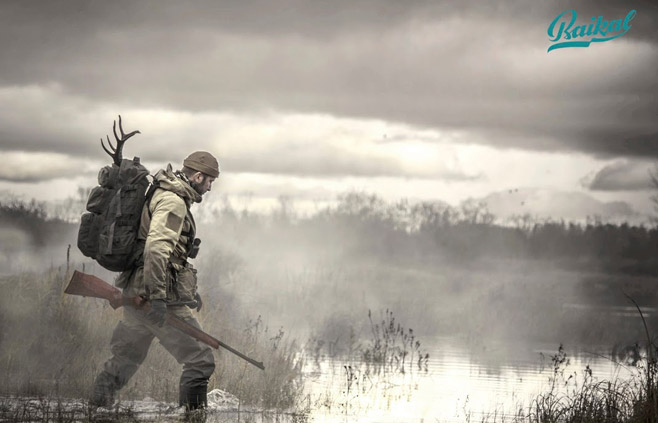 But it was not all sunshine and roses at the conference. Journalists and company men were keenly aware of the blow dealt to Kalashnikov earlier this year by U.S. and EU sanctions on the Russian defense industry.

Although Kalashnikov dominates 95 percent of Russia's domestic small arms market, that market is tiny. Russian citizens are not allowed to own weapons without a license.

Although Kalashnikov officials would not specify how much money was lost due to U.S. sanctions, Krivoruchko told reporters that because of the blacklisting, "we were only able to export 40,000 weapons to the U.S."

A source close to Kalashnikov's export deal with the U.S.-based Russian Weapons Company told The Moscow Times on a condition of anonymity that "the losses are not calculable, but they are in the millions [of dollars]."

"Yes, we are having a hard time," said Rostec's Chemezov. "We have lost the American market, and most of our hunting products were sold to the U.S."

However, Kalashnikov and Rostec believe that the damage has been done and that the outlook for the company's future in the international market is already looking brighter. Sales lost to sanctions are being replaced by new markets — such as Malaysia and Thailand, where deals for civilian arms exports were signed last week.

Although the terms of those agreements were not announced, Chemezov said "we have almost closed the gap."

But under the theatric surface of civilian oriented marketing and sales, the company is struggling to win Russian military contracts, which remain the mainstay of the company's business, according to Ruslan Pukhov, director of the Center for the Analysis of Strategies and Technologies, a Moscow-based think tank specializing in the Russian defense industry.

"The main challenge for Kalashnikov is not the small arms market, but missiles. This is their main source of revenue. They mass-produce missiles at their plant in Tula, and their destiny depends on future orders of these missiles," Pukhov said.

"Everything depends on whether or not these high-precision munitions will be successful in the global market and if the Russian army will buy into them," he said.

Kalashnikov also has important military contracts at stake in the field of rifles. It is bidding for contracts as part of the Russian Defense Ministry's Ratnik program — an analogue to the U.S. future warrior program, which seeks to develop a next generation "battlefield kit," or standard issue set of gear and weapons as part of the government's massive 20 trillion ruble ($370 billion) rearmament campaign.

Correction: An earlier version of this article incorrectly referred to an AK-47 ammunition magazine as a cartridge. A cartridge is a single shell, while the magazine is the container that holds the gun's ammunition.

Russian weapons manufacturer Kalashnikov has signed agreements with partners in Malaysia and Thailand to sell civilian weapons, months after the company...
news

Washington's recent blacklisting of Russian arms manufacturer Kalashnikov has riled some U.S. gun owners, who see the move as an insidious means of curbing...
possible swap