Widespread losses among U.S. President Barack Obama's fellow Democrats in the U.S. midterm congressional elections this week have prompted an outpouring of glee from Russian politicians, but the reactions appear misguided in light of the fact that Republicans — who have won control of the Senate and increased their numbers in the House of Representatives — have long pushed for tougher policies against Moscow than the White House was willing to adopt.

But Russian lawmakers, from Communist leader Gennady Zyuganov to members of the ruling United Russia party, appeared oblivious to the possibility of fiercer Russian policies, casting the U.S. president as the embodiment of American policies and as Russia's top foe.

"Yesterday Obama lost everything that was possible to lose," Zyuganov said Wednesday, according to remarks published on his party's website.

"Obama is now not just a lame duck, but a duck lame in all four of its legs," he said, seeming to have mangled more than a metaphor in this assessment.

Head of the State Duma's International Affairs Committee from the United Russia party, Alexei Pushkov, joined in on the gloating.

"Democrats' defeat at the Congressional election is Obama's personal defeat," Pushkov said via Twitter. "Democratic candidates were even afraid to mention his name, it's so unpopular."

But Pushkov and Zyuganov may find the stance of a Republican-controlled Senate even less pleasant to deal with than the U.S. policies that have provoked their outrage for months.

When the new U.S. Congress convenes in January, Republicans are likely to push for some of their measures that had previously failed to pass amid Democrats' resistance, such as bills to increase sanctions against Russia or provide weapons to Ukraine. The White House has argued that giving lethal military aid to Ukraine could heighten the violence between government forces and pro-Moscow separatists in the east.

Another issue that might prove particularly troublesome for Moscow would be the approval of the U.S.-Canada Keystone XL pipeline, which could lead to a drop in the price of oil — Russia's main export.

Republican National Committee Chairman Reince Priebus told MSNBC on Tuesday that passing the long-delayed Keystone approval bill would be high on the Republican agenda, and that Obama would likely approve it.

"I actually think the president will sign the bill on the Keystone pipeline because I think the pressure — he's going to be boxed in on that, and I think it's going to happen," Priebus said. 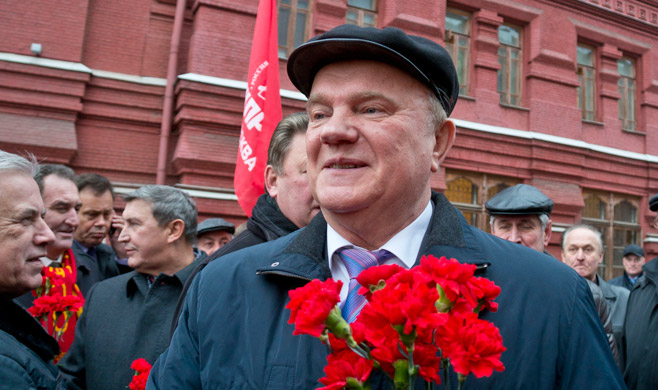 The situation for Moscow may also worsen if the chairmanship of the U.S. Senate's Armed Services Committee goes, as it is widely expected, to Senator John McCain — who this spring denounced Russia as a "gas station masquerading as a country," and has frequently accused Obama of being too soft in international politics.

American sanctions so far, which Russian politicians have publicly derided as toothless, have also drawn criticism from commentators in the U.S., with Foreign Policy editor and CEO David Rothkopf referring to them as "pinprick" and "halfway measures" in a recent article.

Russia's meddling in Ukraine and the disappointment of U.S. voters with their government's response appear to have played a role in the elections, strengthening Republicans' positions and marking a deviation from the focus on domestic issues that had traditionally dominated midterm elections in the past.

"Ukraine is really the straw that broke the camel's back, in terms of public support for the president's foreign policy decisions," Mackenzie Eaglen, a defense analyst at the American Enterprise Institute, told The Hill, a newspaper that covers Washington. She added that a Republican Senate would press Obama to provide weapons to Ukraine and tighten Russia sanctions, The Hill reported.

An NBC News/Wall Street Journal poll, released just before the balloting, showed that one in five Americans considered international crises, such as Russia's meddling in Ukraine, even more important to their vote for Congress than domestic issues such as economy and health care.

Another poll, conducted by the Pew Research Center in September, indicated that 64 percent of Americans considered foreign policy issues a key issue — though not necessarily the single most important — in their midterm vote. An earlier Pew Research Center poll has also indicated that 54 percent of Americans thought that Obama's foreign policy was "not tough enough."

The Pew Research Center's director for global economic attitudes, Bruce Stokes, said in a recent article in Foreign Policy magazine that a Republican-controlled Senate would mean that "Obama's foreign policy agenda might not be as insulated as he would like."

"Republicans voters' support for a proactive, tougher stance on a range of international issues might push an emboldened Congress to confront the White House on everything from the fight against [the Islamic State] to bolstering NATO in Eastern Europe," Stokes said.