When President Vladimir Putin made a law on health care reform one of his first acts after returning to the presidency in May 2012, medical professionals and members of the public alike nodded their heads in approval, all too aware of the flaws and chaos inherent in the existing system. But now, more than two years on and two months shy of the deadline for the brave new health care system’s debut, medical workers in Moscow are gearing up to take to the streets in protest.

They say the transformation that has been hyped up is not so much the optimization of Moscow’s medical institutions as it is the commercialization. While the reform has been ongoing nationwide since 2012 and has also come under fire in other parts of the country, a leak of Moscow City Hall’s apparent plans on Oct. 15 to fire thousands of medical personnel and shut down dozens of hospitals and clinics threw criticism of the reforms into overdrive. Leonid Pechatnikov, deputy mayor for social issues, has embarked on a marathon of interviews to reassure residents and medical staff that the leaked documents were only a proposal, not a final plan, but medical staff say cuts and redundancies are already in full swing.

The leaked documents — posted on the website of the Russian Medical Server, a forum for medical professionals — appeared to reveal that Moscow’s health department plans to shut down 28 medical centers over the next two years, including more than a dozen hospitals, as part of the reorganization. Of the remaining centers, the smaller ones would then be merged with larger hospitals, and the premises that are vacated would be added to the balance sheet of the Mayor’s Office.

“It started out quietly, unnoticed. Little hospitals were closed here and there … and now, all of a sudden, mass redundancies have started, and they keep happening. Day after day, more and more people are getting laid off. … And now, when it is starting to get cold, when there tends to be a spike in illnesses, there won’t be enough specialists,” Alla Frolova, coordinator of “Together for Dignified Medicine,” a grassroots group that has organized a Nov. 2 protest against the reform, told The Moscow Times.

“They say this is all about effectiveness and supposedly to boost the quality of services. But all I see so far is commercialization, charging for services that used to be free. … They close down one center and then convert it into a private center right before our eyes. And the prices differ enormously,” she said.

The health care system is desperately in need of reforms, she said, but “they should not be done so abruptly.”

Olga Demicheva, a doctor at Moscow’s Hospital No. 11, which last year was merged with the city’s Clinical Hospital No. 24 as part of the reform, posted a video address on YouTube on Sunday, calling on Putin to pay attention to “this travesty with health care” that is leaving the “elderly and weak helpless.”

Demicheva, like Frolova and many other health care workers who have spoken out against the reform, believes that the reorganization is necessary but that it has been hijacked by officials who are more interested in profits than improving medicine.

“Mr. President, … they’re giving you fake numbers and phony guidelines. If you don’t believe me, check for yourself how this is going — this thing they so nicely referred to as ‘reform,’” Demicheva said in her video, which had nearly 1,500 views by Wednesday evening.

“I understand how expensive the Olympics were, and Crimea, of course, was expensive as well, but you don’t need to make up for these victories with human lives,” she said.

Demicheva told The Moscow Times that she believed the health care system “needs the reform now more than ever,” but that it should be carried out “not just by professionals, but truly honest professionals” who won’t be guided by profit. 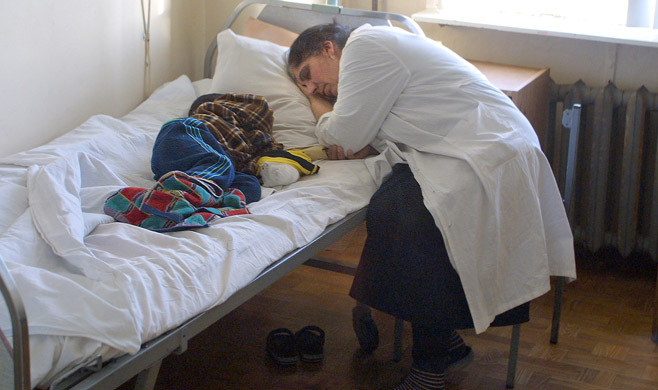 Few deny that reform is needed, but health care workers are concerned that profit is being put above treatment.

Part of the Plan

Deputy Mayor Pechatnikov told radio station Ekho Moskvy on Tuesday that the leaked document was not a finalized plan at all but a proposal as part of an unfinished study being conducted by a consulting company.

He said city officials had not gone about the reform lightly, having ordered three separate expert studies on the health care system to draw up a road map for modernization.

The document that triggered the uproar was “not an action plan at all, but the results of an expert assessment,” Pechatnikov said at a press conference on Oct. 21.

In his interview with Ekho Moskvy on Tuesday, Pechatnikov singled out Hospital No. 11, which has been at the center of medical workers’ criticism over the reforms in recent weeks, as a hospital that must undergo drastic changes due to its lack of certain services.

Giving the example of a patient being treated in Hospital No. 11 and then suddenly requiring urgent surgery, Pechatnikov said that the hypothetical patient would fall victim to the current system’s inefficiency.

“You’d have to put them in an ambulance and send them off to another hospital where a surgeon could operate,” he said, explaining that “this is why such hospitals lacking the full range of services must be merged with larger centers.”

In an earlier interview, Pechatnikov also lamented the fact that the current system does not use space efficiently, noting that the reformed system “must follow the same path that the rest of the world has followed. In this new system, the most progressive centers are the large, multi-specialization hospitals.”

It is precisely those centers that will remain, while other institutions will be merged with them, he said, conceding that it would not be an easy transition.

A request for comment sent to the press service of Moscow’s health department had not been answered by the time of this article’s publication.

There has been no argument about whether the reform is necessary: Bureaucrats, medical workers and ordinary people all agree that Russia’s health care system is in dire need of a boost.

In September, Russia made it for the first time into a Bloomberg ranking of the health care efficiency of 51 nations — but in last place.

The current reform has been a long time coming. Russia’s national health care system has arguably been struggling to get on its feet ever since the fall of the Soviet Union, under which the system was funded by the federal budget.

In the 1990s, a new system was devised that resulted in the establishment of the Mandatory Medical Insurance Fund, in which companies and employees are obliged to pay a portion of salaries into the fund, with that money then going to hospitals and medical centers.

The plan was for the health system to gradually wean itself off the federal budget and rely more on the Mandatory Medical Insurance Fund, in accordance with a law passed in 2010. By Jan. 1, 2015, the costs of all medical centers across Russia will be covered by the fund.

The transition has been akin to electroshock therapy for the city’s health care system, as doctors struggle to treat more patients in the wake of staff redundancies and hospital closures.

An RBC Daily report published Monday said that one Moscow doctor, an oncologist named Sergei Sazykin, was now forced to treat 50 patients in six hours, leaving him around eight minutes for each patient.

“What can I possibly do for my patient in eight minutes?” Sazykin was cited as saying, noting that in that time he was expected to examine the patient, fill out the necessary paperwork and prescribe the required tests.

Both Frolova and Demicheva said Sazykin’s predicament would soon become the norm, with all doctors overworked on a daily basis — a development that will be dangerous for both the doctors and the patients. 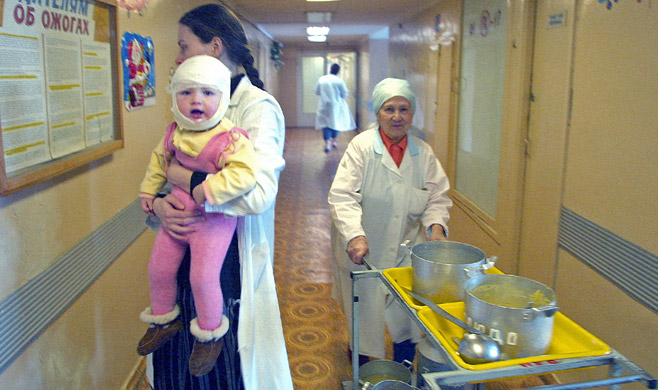 Under the reform plan, smaller medical centers are to be absorbed into larger, multi-specialization hospitals.

Frolova complained that the authorities had prepared for the reform by conducting research into medical institutions over the summer, when the number of patients is always lower.

“They did it when all the pensioners were away at their dachas and the kids were all away at camps. In the summer, there are always empty beds. They should have done it differently, using different methods. But they shouldn’t close down these centers. The way I see it, this is simply mistreatment of the population,” she said.

Semyon Galperin, a neurologist at Hospital No. 11, said in comments to Lenta.ru that he believed the reform was a good idea when it was first announced, when the plan was “to get rid of hospitals with a low level of service or superfluous help.”

But after the hospital where Galperin worked became a branch of another medical center, things only got worse, he said.

Galperin predicted that the reorganization would have a devastating impact on the city’s patients.

“Those who have money will go to commercial centers, where a consultation with a doctor costs 200 euros. But the masses in this country, with an average monthly salary of $300, won’t be able to pay for the medical fees. … This is precisely what our reform will lead to: A few expensive clinics will remain, with high fences, for the privileged few. And for the rest of the population: barefoot doctors and ‘healers.’”

Galperin hinted that the real driving force behind the reform was not the need to optimize, but the potential value of plots of land occupied by certain hospitals.

“All the hospitals in the center of Moscow that occupy the most expensive plots of land have suddenly been labeled ‘ineffective,’” Galperin said in comments to Kommersant.

The health department’s finalized plan for reform is set to be unveiled by the end of the year, but the State Duma this week appeared to respond to the anger of medical workers over their exclusion from the process.

On Tuesday, members of the Duma submitted a draft law calling for the establishment of a public commission to decide on how to carry out the ongoing reforms.

Sergei Kalashnikov, head of the Duma’s health committee, echoed the concerns of health care staff, saying in comments to the TASS news agency Tuesday that “access to medical care in Moscow has abruptly declined in recent years” in connection with the reorganization.

Acknowledging that the reform was being conducted solely by administration officials rather than medical professionals, Kalashnikov said that “the medical community’s control and patients’ control [over medical care] has been reduced with the closure of these medical institutions.”

He said legislation must be put in place to ensure that the reforms are only implemented after they have been approved by members of specially established public commissions comprised of medical professionals, patients and members of the public.

Separately, several State Duma deputies have sent a request to the Prosecutor General’s Office for a probe to be conducted into the mass closure of hospitals, Izvestia reported Monday.

For many Russians with “orphan diseases,” as rare illnesses are called, it is a routine practice to ask friends or relatives going abroad to bring...
new title

The price cap on Russian oil agreed by the EU, G7 and Australia is set to come into force on Monday. It aims to restrict Russia's revenue while making...