PARIS/WARSAW — Pascal Sauvetre, an apple farmer in Poitou-Charentes on France's Atlantic coast, has a headache beyond the usual concerns about weather and tree fungus — Polish apples.

As the European Union's second biggest apple producer, Poland has some 700,000 tons of the fruit it usually sells to Russia but can't, because Moscow has a food embargo on many EU and U.S. goods as part of tit-for-tat sanctions related to the Ukraine crisis.

Many of those Polish apples will inevitably head for western Europe, potentially displacing their more expensive European rivals. Others will go to markets in Asia and the Middle East, traditionally supplied by EU countries such as France.

"What's really sending shivers down my spine is the ricochet effect," said Sauvetre, sales manager of Pom' Deux-Sevres cooperative. "These apples from eastern Europe that can't be sold to Russia and will be sent to western Europe — it's obvious it's going to hurt, a lot."

Apples are just one element in an unfolding problem for Europe's farmers and its Central Bank policymakers. From Polish apples to French pork and Greek peaches, exporters to Russia may either have to slash prices or destroy produce.

It is just about the last thing that the European Central Bank wants to see as it struggles with a flatlining economy and worries about deflation.

George Polychronakis of Greek fruit export association Incofruit-Hellas, for example, watched as some 250 truckloads of peaches and nectarines en route to Russia were halted when the embargo hit.

"They'll either have to sell it at any price to countries along the way or be forced to bring it back to Greece where it will be destroyed," he said.

"Oversupply will drag down prices for other goods and that will have a domino effect on the entire market. Even today, I went to the supermarket to buy peaches for myself and they were cheaper than three days ago."

It is also not just fruit.

"In total, a million tons of pork, poultry and beef from the EU will remain on the market [rather than go to Russia]. It's a very big blow," said Paul Rouche, general manager in charge of pork for the French meat trade union SNIV. 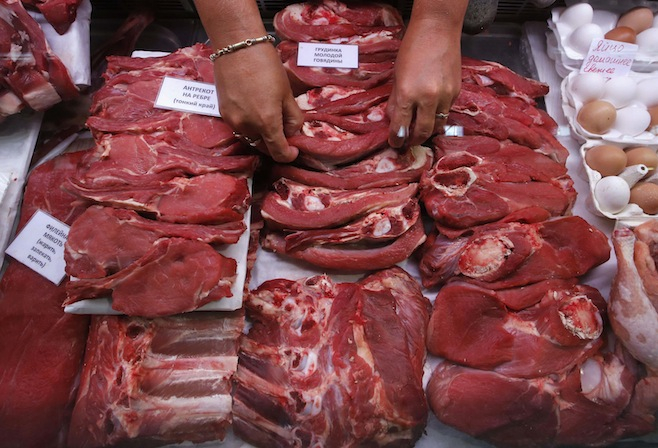 A vendor sells meat at the city market in St.Petersburg, Russia.

At the macroeconomic level, this threat of lower prices might not matter in normal times.

But these are not normal times as far as inflation is concerned.

Despite record low interest rates and money pumping policies, euro zone inflation is running at only 0.4 percent year-on-year, a number that is way below the ECB's close-to, but below 2 percent level and also entrenched in what the Central Bank considers "the danger zone" under 1 percent.

This is before any major impact from the sanctions.

Deutsche Bank analysts have lowered their euro zone 2015 inflation forecast to 1.1 percent from 1.2 percent on the basis of western European food supplies being banned from Russia and producers offloading capacity in the euro zone. They see the impact taking effect from this autumn.

"I think it would have to start pervading core inflation before they [the ECB] really freak out. But it doesn't help," Deutsche Bank economist Gilles Moec said.

The deflationary potential can already be seen in some places.

Total Dutch fruit and vegetable sales to Russia were about 600 million euros last year, according to Frugi Venta, a trade association that represents 420 Dutch companies.

"Prices in some fruit and vegetables have fallen by as much as 75 to 80 percent," said spokeswoman Inge Ribbens. "A lot of trucks have been turned back at the border."

Leave it on the Tree?

The closing off of a major export market, meanwhile, threatens to hurt segments of the euro zone economy at a time when growth is pretty poor anyway.

There was no economic growth between the first and second quarters of this year in the euro zone and on a year-on-year basis the growth rate is just 0.7 percent.

Scrambling to limit damage on their agricultural sector, Poland and others have asked the EU to draw up plans to withdraw the surplus from the market and compensate farmers.

"We asked the Commission to help us avert the crisis this season and allow us to deal with the surplus by distributing it to charities, turning it into biofuel or simply using the apples as organic fertilizer," Polish Agriculture Minister Marek Sawicki said.

"Realistically, we can place around 100,000 tons on new markets in South America, North Africa and the Far East," said Miroslaw Maliszewski, head of the Polish Fruit-growers' Association.

Warsaw has also asked the United States to open up its market to Polish apples, said Poland's ambassador to Washington, Ryszard Schnepf.

He has dubbed them "Freedom Apples" in the hope of persuading Americans it is a patriotic duty to tuck in.