Rimmed with turrets and punctuated by a high central tower, the edifice is a replica of the Lichtenstein Castle, a historic neo-Gothic fortress built on a cliff in southern Germany in the mid-1800s.

Cape Town's version, completed in 1998 and known to locals simply as "the Castle," boasts 12 bedrooms, a swimming pool, and a banquet hall lined with stained-glass windows and suits of armour. The property, overlooking the city's Hout Bay, contains a helipad and a natural waterfall, and is accessible only by a helicopter or the private mountain road.

One of the most famous real estate landmarks in Cape Town, the Castle used to be a guest house and popular venue for wedding receptions.

Now, it is owned by a Russian.

Though the realtors that closed the deal in 2012 refused to divulge the identity of the new owners, they told West Cape News that the residence was sold to a "high-profile" Russian businessman for $2.2 million.

The Castle isn't the only piece of prime real estate to be scooped off the Cape Town market by Russians. Local real estate agents say wealthy Russian buyers have purchased numerous other multi-million-dollar homes along the city's picturesque coast in the last several years, tapping into the region's mix of sun, sea and mountains.

Foreign interest in South African real estate, in fact, is reaching a peak, which economists say is being partly driven by a weakened local currency that has boosted major global currencies' buying power.

The South African rand has been depreciating since mid-2011, according to economic data analysis center CEIC, making residential real estate here hugely cheaper for foreign currency earners. A report published by South African lender First National Bank, or FNB, last month found that housing prices in South Africa are down 21.7 percent in euro terms and 19.4 percent in dollar terms compared with the end of 2010. While the Russian ruble has also slid against these currencies, its depreciation has been slower.

Property purchases by foreigners have doubled from an estimated 2 percent of total buying in 2010 to 4 percent in the first half of this year, the FNB report found. Cape Town, surrounded by picturesque beaches and wine farms that thrive in the region's Mediterranean climate, is particularly popular, with an estimated 7.5 percent of total property sales going to foreigners.

The FNB report pointed to global economic recovery from the 2007-08 financial crisis as the primary driver for the property-buying bump.

For local real estate agents, the question of "why South Africa?" is more than just financial: Investors get not only a bargain on property here, but a buy-in to what locals boast is an unusually high quality of life.

"[Cape Town] is spectacular," said Lanice Steward, the managing director for global property agency Knight Frank in Cape Town. "You've got great beaches, some of the best restaurants in the world, affluent, first-class facilities, and it's not as overcrowded as Europe." She credited the country's hosting of the FIFA World Cup in 2010, which attracted over 300,000 international visitors, for developing the city's world exposure over the last four years.

But Miller, from Sotheby's Realty, also cited the country's lack of restrictions on foreign buyers as a reason for the growth.

Many governments around the world have imposed constraints or taxes on foreign property buying that make the process more difficult or less desirable for non-citizens. Hong Kong and Singapore have imposed extra taxes to deter holiday-home-hungry foreigners from buying there, with Malaysia poised to do the same. In Switzerland, non-Swiss can only acquire property in specific zones, mostly in the south of the country.

South Africa, so far, lacks the legal hassle of foreign property purchasing found in other countries — and buyers appreciate that. "They [foreigners] are free to bring their money in and take their money out as they wish, which is Plus No. 1," Miller said. "It's an easy country. We're very accommodating." 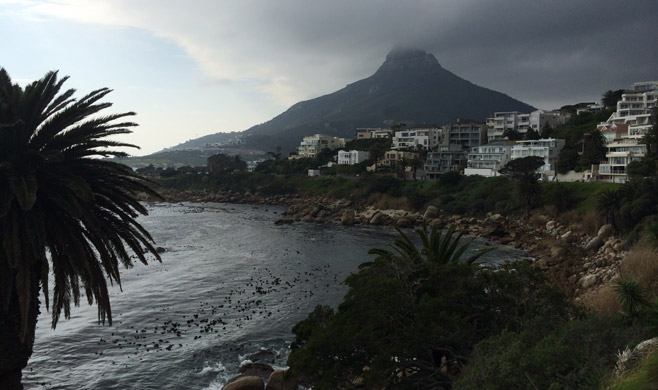 A mountain disappearing into the cloud above Cape Town’s palm trees.

Miller estimated that the number of international hits on Sotheby's South African websites has leaped 30 percent over the last nine months, but deciphering which nationalities are feeding the renewed property growth is tricky because sales statistics typically do not specify the race, gender or nationality of clients.

Both Miller and Steward named Britain and Germany as the top two foreign buyers here, with Russia informally ranking in fifth or sixth place in terms of interest.

Russians, however, are the newcomers to the South African property scene: Western Europeans have long dominated foreign sales here, but "five years ago, if we saw a Russian client, that was quite something," Steward said. Now, the local offices of Knight Frank and Sotheby's say they work with up to a dozen Russian clients per year.

There's a sense of inevitability in the idea that, despite living a world away, Russians would begin to move into South Africa.

Rich Russians also enjoy an exceptionally high level of disposable income, significantly more than the average among the member countries of the Organization for Economic Cooperation and Development (OECD), a club comprising some of the world's richest nations.

The top 20 percent of Russian earners make an average $33,860 of disposable income per year, the OECD Better Life Index found, compared with the $23,938 annual average of OECD members.

With money to spend and an apparent partiality for warm-weather beach vacations, Russians have built a reputation for flooding tourist resorts in Turkey, Thailand, the United Arab Emirates and Egypt during Russia's long winter-holiday season.

But after President Vladimir Putin began to tighten restrictions last year on the freedom of the Russian elite to move their capital, Russians may now be motivated to move their assets more permanently overseas.

"There is a sense that [Russian] people want to get their money out [of the country] because of Putin closing down the doors," said Steward, of the Knight Frank property agency. "That could be a reason why they want to invest here. The Russian market has certainly found London, and I think Cape Town is now being discovered."

Political stability in South Africa, a nation with a recent history of race-related political upheaval, remains a key condition for sustained foreign investment in the local economy, along with continued global economic recovery, Steward said.

But barring another global financial crisis or local political riots, property agents say that Russian — and foreign — interest in South African real estate will only grow in coming years, not least because of the climate.

After all, when it's winter and snowing in Moscow, it's summer and sunny in Cape Town.

Pro-Kremlin Party on Track for Majority After Crackdown

Russia heads to the polls in the country’s parliamentary elections in which most vocal Kremlin critics have been barred from running.
new precedent

The U.S. tech giant faces mounting criticism from the Russian opposition and abroad for backing down to demands from Russian authorities.
russia's response