As pro-Russia militants occupied more government buildings in eastern Ukraine on Monday, Russia and the West exchanged recriminations about their supposed involvement in the ongoing crisis, which threatens to escalate into more serious violence between militants and Ukrainian forces.

In Europe, efforts by the West to take a unified position regarding penalties on Russia seemed to falter, as European Union foreign ministers failed to reach agreement on additional sanctions at a meeting in Luxembourg, despite some ministers placing the blame on Russia for the unrest in eastern Ukraine. The U.S. continued to signal a harder line, with one senior diplomat saying Monday that arming Ukrainian forces was an option.

In Ukraine's restive Donetsk region on Monday, following the occupation of administrative buildings in at least nine cities, a pro-Russian mob stormed a police station in the city of Horlivka, 100 kilometers from the Russian border, where at least 40,000 Russian troops were massed recently, according to U.S. government reports.

Ukraine's central government in Kiev issued an ultimatum on Sunday threatening to crush the mobs with force if they did not vacate government buildings by Monday morning, but no efforts to storm the premises in Donetsk or other towns in the region were reported.

The leader of pro-Russia separatists in the town of Slovyansk, Vyacheslav Ponomaryov, appealed to President Vladimir Putin on Monday to help defend them against Ukrainian government forces. The West has expressed concern that Russia could send troops to eastern Ukraine to destabilize the situation further, or even as a precursor to annexation, as happened in Crimea last month.

Putin is watching the situation in Ukraine closely and with great concern, his spokesman Dmitry Peskov said Monday, speaking about the appeal by Ponomaryov.

"Unfortunately, there is a great many such appeals coming from the eastern Ukrainian regions addressed directly to Putin to intervene in this or that form," Peskov said, Reuters reported.

In Luxembourg, the 28 EU foreign ministers on Monday met to discuss the possibility of new sanctions, but no decisions were made. They said an emergency meeting could be held next week if talks scheduled for Thursday in Geneva do not achieve results.

"I think it will be too early today. But I think we need to be prepared," said Dutch Foreign Minister Frans Timmermans, the Associated Press reported.

British Foreign Secretary William Hague said the seizure of government buildings in eastern Ukraine clearly "is something that is being planned and brought about by Russia," the AP reported.

In Berlin, senior U.S. diplomat Thomas Shannon, who works as an aide to Secretary of State John Kerry, said military assistance could be given to Ukraine.

"Obviously we are looking at that as an option … but at this point I cannot anticipate whether or not we are going to do that," said Shannon, reported Reuters.

Top Russian and Western officials engaged in further recriminations, demonstrating their widening disagreement over the interpretation of the rapidly changing situation in eastern Ukraine.

"We are not intruding into Ukraine's internal affairs — this is against our interests," said Foreign Minister Sergei Lavrov at a news conference following a meeting with his Sudanese counterpart, Ali Karti.

"There are neither GRU nor FSB operatives over there," he said, referring to Russia's main military intelligence agency and the Federal Security Service.

The U.S. State Department has repeatedly insisted that the seizures of government buildings by pro-Russian militants in the Donetsk region were instigated and orchestrated by Russian covert actions in the area.

"The only entity that is capable of these coordinated, professional military actions is Russia," said U.S. Permanent Representative to the United Nations Samantha Power at an extraordinary meeting of UN Security Council late Sunday. 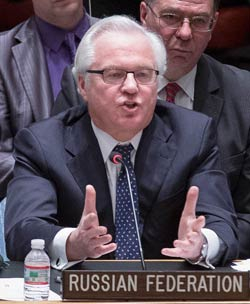 Vitaly Churkin speaking at the UN.

"This is the saddest kind of instability. It is completely man-made. This 'instability' was written and choreographed in and by Russia," Power said.

Her Russian counterpart, Vitaly Churkin, was also adamant in his accusations, saying that "the international community must demand that the stooges of Maidan stop the war against their own people."

Lavrov, Kerry and representatives of the EU and the Ukrainian government plan to meet in Geneva on Thursday for talks aimed at resolving the Ukraine crisis.

At the same time, Russia warned that the meeting could be cancelled if the Ukrainian government uses force against the militants. In a phone conversation with UN Secretary-General Ban Ki-moon, acting Ukrainian President Oleksandr Turchynov suggested that an operation to quell the armed mobs in the east could be conducted jointly with UN peacekeepers.

The authorities in Kiev have attempted to placate pro-Russian protesters' demands by hinting that a referendum on the future shape of Ukraine could take place on May 25, the day of the presidential election.

Konstantin Zatulin, director of the Moscow-based CIS Studies Institute, has said that such a referendum would fail to eliminate tensions in Ukraine's east.

"The government in Kiev must make a political decision that will turn the country into a federation. If an all-Ukrainian referendum takes place, then the East-West divide will still make the result unsatisfactory for the losing side," he said by telephone.

While diplomats exchange accusations, people in Ukraine's capital are waiting for their new government to take decisive actions, according to a local political analyst Alexandr Paliy.

"There is strong evidence that the militants are part of Russian special forces that were sent here as provocateurs," he said by telephone from Kiev.

"The Crimean scenario can work here too, since the Ukrainian government is losing control over the Donetsk region," he said.