KIEV — Tanks headed north into Ukraine this week from Russian-controlled Crimea. Not at the head of an invading army, but on a trainload of military equipment in such poor shape that Moscow had no use for it.

This humiliation illustrates the yawning chasm in the two countries' armed forces — one hollowed out by a lack of finances, the other benefiting from booming oil revenues.

Russian military forces are far better equipped than their counterparts in Ukraine, whose government can barely afford to pay their soldiers' salaries. Here is a look at the amount the two former Soviet republics spend each year on each member of their armed forces, compared with even bigger-spending militaries in the East and West, according to security affairs consultancy IHS Aerospace & Defense. The totals are in U.S. dollars per year, per member of the armed forces.

The Russian military is also much better funded. It is projected that Ukraine will spend almost $12,000 this year for each member of its armed forces, according to data provided by security affairs consultancy IHS Aerospace & Defense. Russia will spend seven times as much per person.

While much uncertainty still reigns in Ukraine, which is in dire economic straits and hoping to restore political normalcy with presidential elections set for May 25, its military is racing to figure out how to avoid another debacle at the hands of its giant neighbor. It is not clear yet exactly how much losing Crimea to Russia has degraded Ukraine's defensive abilities.

"They have lost all the installations and facilities — Army, Navy, air bases and all the infrastructure that goes with them — in Crimea. They have lost several thousand soldiers and airmen and sailors," said Stephen Blank, a military expert at the American Foreign Policy Council. "The Ukrainian heartland is now vulnerable to an invasion from the south, as well as from the east."

Ukraine's Defense Ministry press office said Tuesday that it was not able to provide figures on its losses. But according to Russian estimates last week, out of the 18,800 Ukrainian military servicemen in Crimea before the peninsula's annexation by Russia, Ukraine was only withdrawing 1,500. The bulk of the remainder switched sides, Russian officials said.

Navy Loss 'Not So Bad'

"There were at least two highly trained, highly effective special operations units deployed in Crimea, and they are terribly dangerous for anybody," he said.

The Kiev-based Center of Military and Political Research estimates at least 51 Ukrainian Navy vessels were seized by Russia, leaving only 10 ships still flying under a Ukrainian flag. Mark Galeotti, a security expert at New York University, argued that loss might not be so bad.

"It was never really a force that could be expected to be involved in any serious war-fighting," he said. "So the Ukrainians might not be able to occasionally send a frigate with a multinational force to fight pirates off the coast of Somalia. But that was always a political gesture to show that Ukraine was a big boy now, rather than anything else." What hardware Ukraine does gets back comes with Russia's disdain. As one unidentified Russian military official told the state news agency RIA Novosti last week, the 350 Ukrainian tanks in Crimea dated back to the 1970s and would be of little use to Russia's armed forces.

But the ease and speed with which Russia was able to peel away a chunk of Ukrainian territory nearly the size of Belgium points to serious structural shortcomings in Ukraine's defenses.

Developments in Crimea have lain bare the damage wrought over the four-year rule of President Viktor Yanukovych, who was ousted in a popular uprising in February, said James Sherr, associate fellow at Chatham House think tank. The professionalization of Ukraine's military was greatly reduced after Yanukovych was elected in 2010 and its command-and-control links were disrupted or damaged, he said.

"In the last few days and weeks of his presidency, vital communications records were destroyed," Sherr said. "Reserves, equipment holdings were cleaned out. Cleaned out, probably sold."

Yanukovych's plan to turn the military into an all-volunteer force — last fall's draft was the last one — was by most experts' analysis performed hastily and further eroded troop readiness.

It was not always this way.

In 2003, Moscow-commanded forces made a lunge for an island in Kerch Strait, which separates Crimea from Russia, but were quickly rebuffed by Ukraine. Mobilization in Crimea was swift, with Navy and border guards placed on full alert. 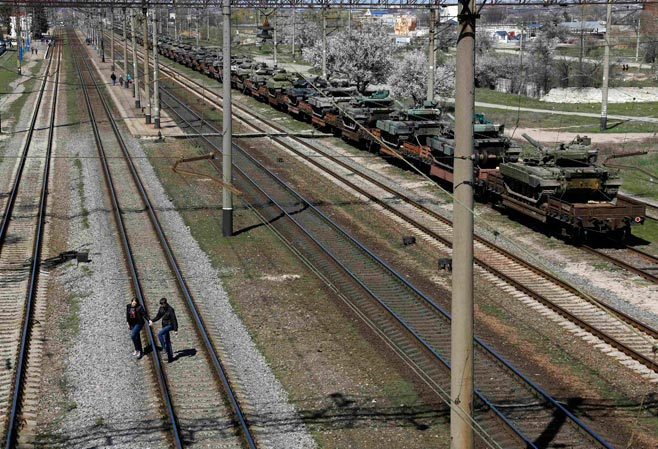 A couple crossing railway lines next to Ukrainian tanks that are getting ready to depart from Crimea to Ukraine.

Rebuilding that level of efficiency will require time and assistance, including from the West. That has been in short supply so far.

Reported Ukrainian requests for military hardware have so far gone unmet, and the U.S. has limited itself to supplying $3 million worth of nonlethal field rations.

"This is a very discouraging message in these circumstances, which I think very few in Washington [understand]," Sherr said.

Leading candidates for Ukraine's May 25 presidential vote have championed revamping the military, but the country's dire finances mean those promises are likely just rhetoric. The International Monetary Fund has recently agreed to loan Kiev up to $18 billion just to get the country through the next two years.

"Given the economic situation in Ukraine, it will cost them an enormous amount of money to buy the equipment and to rebuild the infrastructure that they need to defend themselves against Moscow," said Blank of the American Foreign Policy Council. "They do not have that kind of money and they will not for a long time."

Instead, the priority may fall on adopting a revised military posture. The bulk of Ukraine's forces are currently based in its western regions, far from the country's eastern border with Russia, which now appears the most likely site for an attack.

On Saturday in the Lugansk province, 20 kilometers from the Russian border, Ukrainian soldiers were patrolling one of the many military encampments that have sprung up. Its tents, foxholes and barbed-wire perimeter fence were a temporary quick fix in what analysts say will be a costly readjustment to addressing a potential eastern threat.

If there is one area where Ukraine could in principle do Russia some harm, it is weapons manufacturing. Ukrainian state-owned weapons conglomerate Ukroboronprom has announced it would stop deliveries to Russia, pending the continuation of diplomatic hostilities.

"That might be very serious, because without parts and elements produced for Russian weapons systems … Russia might have nothing to export," said Sutyagin of the Royal United Services Institute.

He said a little more than half of Russia's strategic warheads are carried by missile systems that are either Ukrainian-designed and produced or rely on key Ukrainian components.