Russia has just offered a lifeline for the winemakers of Gagauzia, an autonomous region of Moldova whose leaders do not agree with the country's push to join the European Union.

Moscow banned wines from Moldova last year, depriving the industry of its biggest market — worth more than $100 million annually — in what was widely seen as punishment for the former Soviet republic's drive to join the EU.

But Mihail Formuzal, governor of Gagauzia — home to an 150,000 ethnic Turkic minority whose leaders oppose Moldova's EU course because of their Orthodox beliefs and history of close ties with Russia — has won an exclusive reprieve.

The pro-Western Moldovan government is pushing ahead with an EU trade deal despite increasing divisions about whether to integrate with Europe or stick with former Soviet master Russia like some in neighboring Ukraine.

Gagauzians feel poorly treated by the central government, and like in the self-proclaimed republic of Transdnestr, a breakaway region in the east of Moldova populated mainly by Russian speakers, would prefer closer ties with Russia than with the EU.

On his way back from meeting Russian officials in Moscow, Formuzal said Moldovan customs officers at the international airport in the country's capital Chisinau had insulted his delegation, taken it aside and searched its bags.

"It was pure humiliation," he said in Comrat, the sleepy administrative center of Gagauzia.

For more than two decades as an independent state, mainly Romanian-speaking Moldova has contended with Transdnestr, which is home to a Russian military contingent and is the focus of fresh Western concern about another Kremlin military adventure after annexing Ukraine's Crimea.

But now Moldova, a landlocked country of 3.5 million bordered by Ukraine and Romania, is facing more resistance as it presses ahead with the EU deal, this time in the south.

Under the law, Gagauzia has the right to a certain degree of autonomy within Moldova but its leaders say the central government has not given them many rights.

Asked about the example of Transdnestr, Formuzal told Reuters: "They [Moldova's government] are pushing us in that direction," and complained of ethnic discrimination.

Some Moldovans see the long arm of Russia, fanning tensions as part of a strategy of divide-and-rule that has left Moscow's post-Soviet backyard unstable and thus largely kept the EU's economic power and NATO's military might at bay.

"Not Ready" For Europe

Russia's offer to Gagauzian winemakers came soon after Formuzal organized a referendum in the province in February in which an overwhelming majority called for Moldova to join a Russian-led customs union rather than a political and trade pact with the EU.

It was rejection of the same EU deal in November by former Ukrainian President Viktor Yanukovych that triggered street protests against his rule. Yanukovych had balked under the threat of economic retaliation from Russia.

Toppled in February, he fled to Russia, and the Kremlin sent troops into Crimea on the pretext of protecting its narrow ethnic Russian majority from the "fascists" that Moscow said had taken power in Kiev.

The peninsula voted to split from Ukraine and was absorbed by Russia on March 21. The parallels with Moldova are unnerving.

Just this month, Transdnester officials called on Russia to absorb the region of 500,000 people. In a phone call with U.S. President Barack Obama on Friday, President Vladimir Putin voiced concern about a "blockade" of the territory, which relies on imports through Ukraine. 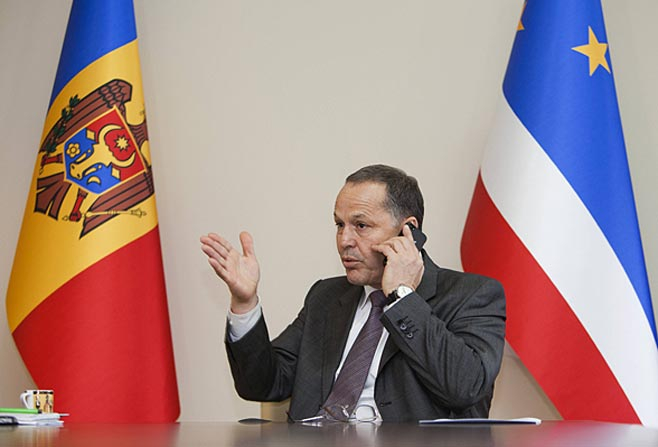 Gagauzia governor Mihail Formuzal speaking on the phone in his office.

Russia has massed tens of thousands of soldiers on its western border with Ukraine, fueling fears of an incursion in Russian-speaking areas of eastern Ukraine. They might even make a dash for Transdnestr, NATO warned last week.

Russian Foreign Minister Sergei Lavrov said Saturday that Russia had "no intention" of invading eastern Ukraine. The troops, Russia says, are on exercises.

Moldovan Prime Minister Iurie Leanca warned of spillover nonetheless. In an interview with Reuters, he complained of "a series of provocations" in Transdnestr, and alluded to Gagauzia as well.

Events in Crimea, he said, "might trigger some unwanted and undesirable developments in the southern part of Moldova."

Leanca's government declared the Gagauzia referendum illegal, but Formuzal says Chisinau would do well to heed the message before signing the EU pact in the summer, echoing those Moldovans who say Russia is a safer bet.

"When these suits in Chisinau tell me tales of how Italians will be drinking Moldovan wines, I think they should be given straitjackets and subjected to psychiatric tests," he said. "We are not ready to compete in Europe."

Leanca, a graduate of Moscow's revered State Institute of International Relations, said such fears were unfounded, but conceded that support for Moldova's pro-EU course had "weakened" ahead of an election later this year in which the opposition pro-Russian Communist Party is bidding for a return to power.

Leanca acknowledged complaints from Gagauzia over Moldova's respect for its autonomous status, but said Russia's offer to import wines only from the south was "a purely political decision."

Russia has made little secret of its meddling. Deputy Prime Minister Dmitry Rogozin, on a trip to Chisinau in September, warned Moldova it would be a "grave mistake" to press ahead with EU integration.

Alluding to the country's almost total dependence on Russian gas supplies, he said: "I hope you do not freeze." He added: "Moldova's train, en route to Europe, will lose its wagons in Transdnestr."

Rogozin has played on fears among the Gagauz, fears that also fed Transdnestr's rebellion in the early 1990s, that Moldova's pro-European leaders harbor ambitions to reunite with neighboring Romania, 74 years after the Soviet Union split them in two. EU membership is simply the first step, so the argument goes.

Western diplomats are at a loss to predict what might happen, but the EU is pressing ahead with plans to seal the pact with Moldova by the summer.

In a sign of how seriously the 28-nation bloc views the resistance in Gagauzia, EU enlargement commissioner Stefan Fule visited Comrat in January, discussing the "myths" and benefits of the EU pact, he wrote on Twitter.

Nicolae Chirtoaca, a former Moldovan ambassador to Washington and now director of the Chisinau-based Independent Institute of Strategic Studies, said Moldovans were torn fifty-fifty between East and West.

He laid out a dramatic scenario of Russian military intervention on the pretext of protecting the Gagauz such as happened in Crimea.

"The threat, the real threat is a possible invasion of southern Moldova by the Russian military and Transdnestr paramilitary groups to make Moldova negotiate and renounce any kind of pro-European policy," he said.

Formuzal would not be drawn on how Gagauzia would respond when Moldova seals the EU deal, saying it should be put to a nationwide referendum.

"I know what you are worried about, but everything will be peaceful," he told Reuters. "We will defend our rights."