A company spokeswoman said that the police's presence at the factory was the result of a criminal case being opened against Roshen in Russia, though the suspected crimes are unknown, Reuters reported. She added that the company's Russian accounts were frozen last week.

A statement from the Ukrainian ministries said that Russian riot police had taken control of the facility on Wednesday without producing any documents and that Roshen executives had not received any official warnings.

The ministries added that the seizure of assets in Russia violates international law and the principle of private property, also cautioning that the episode "set a dangerous precedent, which could backfire." 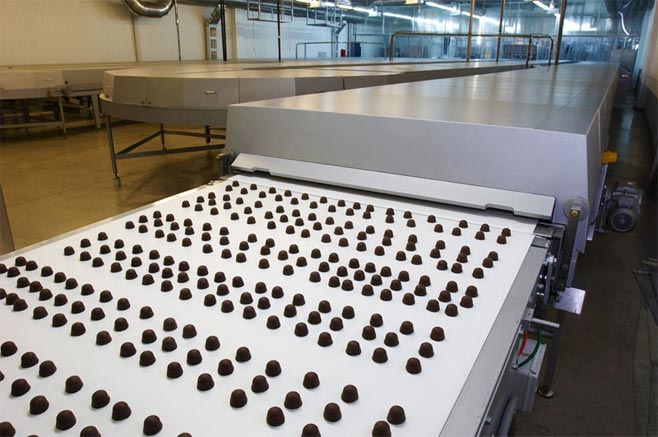 Chocolates marching in peaceful formation on the production line.

Relations between Ukraine and Russia have become strained in recent weeks as the ouster of Kremlin ally and former Ukrainian President Viktor Yanukovych led to increased separatist tension in Ukraine's Crimea region, which signed an annexation agreement with President Vladimir Putin on Tuesday.

The row is not the first time the company, owned by Ukrainian billionaire and independent politician Petro Poroshenko, has been the victim of less-than-sweet relations between Russia and Ukraine.

Last summer, in the lead-up to an association agreement with the European Union that Yanukovych would ultimately backtrack on, the Federal Consumer Protection Service banned all imports from the Ukrainian candy company, saying that its products violated quality and safety requirements. In December, Russian health officials said that the chocolates would be allowed into the country at the beginning of 2014.

Roshen is Ukraine's largest candy company, producing an estimated 450,000 tons of candy annually, according to its website. Poroshenko, from whom the company takes its name, is the highest-polled candidate among possible contenders for the Ukrainian presidential election in May. Last year he voiced support for moving closer to Europe instead of joining the Russian-backed Customs Union.