Among the voices drowned out by victory celebrations across Crimea as it voted to leave Ukraine and join Russia were those of the Tatars, a minority group for whom the prospect of a return to Moscow rule brings only fear and uncertainty.

The Sunni Muslims, who are of Turkic origin, consider Crimea their home, and their deportation to Central Asia by Soviet forces during World War II and earlier suppression by Stalin meant they were far more comfortable with Ukraine.

Now they face being dragged into modern-day Russia against their will, despite their boycott of Sunday's referendum in which 97 percent of voters in the Russian-majority region were said to have rejected Kiev.

Tatars account for 12 percent of the Black Sea peninsula's population of two million people and their protest was not enough to change the outcome of a vote that has brought East-West relations to their lowest ebb since the Cold War.

"Why do I not want to be a part of Russia?" asked Mustafa Asaba, a regional leader of Crimean Tatars.

"Russia's government is unpredictable, because at its head sits a dictator," he said, referring to President Vladimir Putin, who has masterminded the annexation of Crimea and alarmed Europe and the U.S. in the process.

On Wednesday, Putin seemed to reassure Tatars that they would not face discrimination, saying Tatar would be one of the three official languages in Crimea.

But Asaba, wearing a traditional black wool hat, said he feared pro-Russian agitators in Crimea would resort to "provocation" to chip away at Tatars' identity, by curtailing their language, culture and religion.

"We have always enjoyed freedom of expression … and I think that if they oppress us, we will resist," he told Reuters at a friend's home in the windswept town of Belogorsk, 50 kilometers east of the Crimean capital Simferopol.

"There will be trials and prisons. Nothing good will come of it."

The stocky 58-year-old was born in Uzbekistan, where his family was banished in the 1944 deportation — punishment for Tatars who joined special Nazi units and fought the Soviets.

Many also served in the Red Army, but when Soviet troops retook the Black Sea peninsula, Stalin punished the entire Tatar population by loading them into railway cattle cars to spend a life in exile.

Many died from disease or starvation, and Tatars were only allowed back to Crimea in the 1980s under Mikhail Gorbachev.

Crimean Tatars, who have not been afraid to express their views during the crisis, draw on the hardships of the past to steel themselves for what they expect will be hard times ahead.

"If the worst-case scenario [joining Russia] comes about — and we still hope it will not happen — I think our people have been through worse times, including deportation and living under curfew in Uzbekistan," Asaba said.

He believed only a small number of Tatars would leave Crimea now that it looks destined to become part of Russia — a process that has yet to be formally completed.

"I think 95 percent of Tatars will stay here under whatever conditions, because Crimea is our homeland. There is no other." 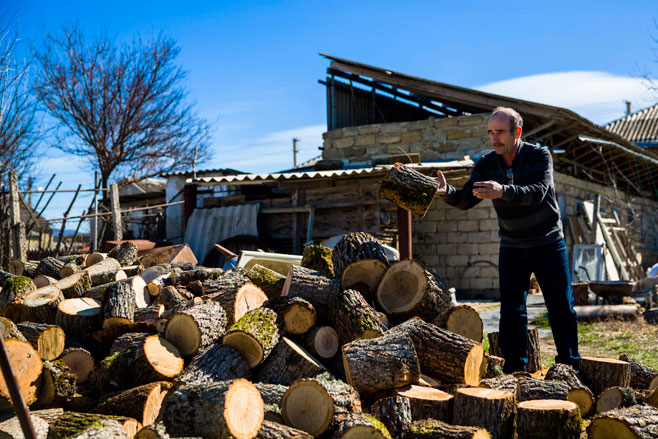 A Crimean Tatar piling wood in his garden in Belogorsk, near Simferopol.

In a shop at the end of a potholed dirt road in Belogorsk lined with modest bungalows, manager Niyara, who did not want to give her surname, said people had been stockpiling food.

"People are really worried," she said. "I have a child, and I myself am scared."

Niyara fears that Russian Crimeans may now try to seize back property from Tatars that they believe is theirs.

"A lot of our houses are unregistered, and Russian regulations on that kind of thing are very, very strict."

Crimea has been under the control of Russian troops for weeks, since Moscow sent in thousands of soldiers ostensibly to protect Russians against what it says are "fascists" in Kiev who overthrew the Moscow-backed President Viktor Yanukovych.

The military buildup, and formation of unarmed volunteer groups who have taken on low-level security tasks, coincides with an increase in physical and verbal threats against Tatars.

Like Tatars, Russian nationalists have long memories, and recall to this day that the Crimean Khanate which Tatars ruled from the 15th to the 18th century was notorious for enslaving Christian Slavs and selling them on in the Ottoman Empire.

The sizeable Tatar community in Belogorsk has organized unarmed patrols to check for military hardware stationed in the area or anything unusual that may pose a danger.

Refat Chubarov, a Crimean Tatar leader who led the campaign to boycott the referendum, told reporters  Monday that the fate of several dozen Tatars remained unknown after they had disappeared in the last week.

Disappearances in Crimea in the last month have also been reported among human rights activists, individuals linked to the Maidan protests in Kiev that toppled Yanukovych and journalists.

The body of one Tatar in his 30s, named by Chubarov as Reshat Ametov, was found this week after he disappeared on March 3, and Chubarov said he had died violently. His funeral will be held on Tuesday.

Crimea's pro-Russian authorities have said they will guarantee Tatar representation in the local government and give the community proper land ownership rights and financial aid.

Both Chubarov and Asaba have also discussed establishing some form of autonomy for Tatars in Crimea, although the talks are in their infancy.

Sergei Aksyonov, the leader of Crimea's separatist authorities whose election Kiev does not recognize, said in a recent interview that money available to Tatars would be doubled this year.

"There are no ethnic or religious conflicts and we will never allow that," Aksyonov told Reuters.

"Aksyonov is unreliable, he is a separatist," said Lenura Asanova, an elderly Tatar woman in Belogorsk. "Russia stands behind him."

Asaba warned Putin that his aggressive move on Crimea could backfire.

"In five years' time, the same Maidan will happen in Russia," he said. "That is why he is afraid. A year ago no-one thought anyone could overthrow Viktor Yanukovych. No-one."