Although it is well-known that the first victim of nearly every military intervention is the truth, Russia seems to have broken all records in this category. Here are the top five Kremlin myths about Russia’s invasion of Crimea:

1. There was no invasion.

Media from all over the world have reported testimonials from soldiers in Crimean cities who are dressed and armed exactly like those in the Russian Army — minus the insignia. They have seized airports, border crossings and administrative buildings, and are pressuring Ukrainian soldiers stationed in Crimea to surrender. Yet, President Vladimir Putin insists that the estimated 15,000 soldiers who have seized Crimea are local Crimean "self-defense forces."

Putin has also said that the Federation Council’s authorization on March 1 of military intervention in Crimea has not been executed yet. What’s more, Putin said last week during a meeting with journalists that the similarity between the uniforms of the Crimean “self-defense forces” and the Russian Army can be explained by the fact that it is easy to buy those uniforms in any clothing store. Putin didn’t clarify, however, if these self-defense forces also bought the armored personnel carriers fitted with Russian military license plates, which were spotted in several Crimean cities, at these clothing stores as well.

Putin’s explanations have the same credibility of a 5-year-old boy who left the top of the cookie jar open and has crumbs all over his face — and then tells his mother, “I didn’t eat any cookies!” 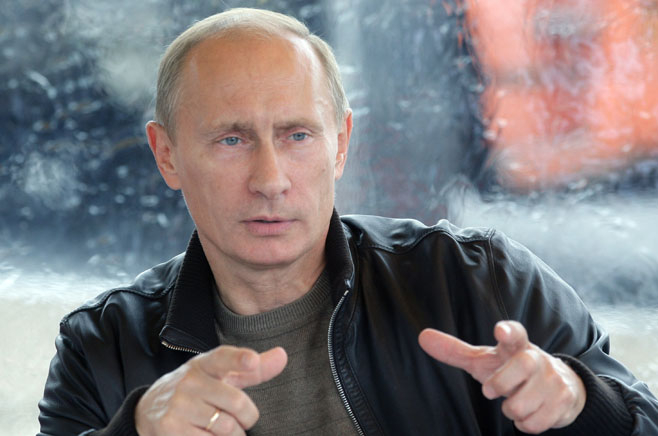 2. Russians are in danger in Crimea.

There is no evidence that Ukrainians in Crimea ­— and certainly not Crimean Tatars — support Right Sector, Svoboda or other far-right, anti-Russian groups whose base of support is limited largely to the Western regions of Ukraine. Nor is there any evidence, despite Russia’s claims, of “Ukrainian fascists” coming to Crimea to carry out attacks against Russians there. Even a group of Ukrainian Jewish leaders wrote an open letter to Putin on Thursday, admonishing the Kremlin not to exaggerate the fascist threat in Ukraine.

This is a repeat of Russia’s provocation in South Ossetia and Abkhazia weeks before the 2008 ­Russia-Georgia war broke out. Then, Russia’s provocation ­­— also centered on the false pretext of “protecting Russian citizens in danger” ­— worked: Georgia fired the first shots in the war. Although Ukrainians have not yet reacted to Russia’s provocation in Crimea, it is inevitable that at some point Ukrainians will be forced to react to Russia’s aggression, particularly if Russia decides to use its weapons on Ukrainian troops in the peninsula. Once the first shots are fired, it is a slippery slope to a protracted and bloody military conflict between Russia and Ukraine that would likely drag in outside powers.

The Kremlin points to Kiev’s first post-revolution legislation that would have deprived the Russian language of its status as a second official language as evidence of Ukraine’s attempt to discriminate against Russians. But a potential language law is no justification for military intervention in Crimea; otherwise, Russia would have sent troops to Latvia long ago. Second, interim President Oleksandr Turchynov vetoed the bill anyway, making it a moot point.

In reality, far from defending Crimean Russians against a fictional threat from the new government in Kiev, Russia is stoking a volatile inter-ethnic conflict by seizing Ukrainian military facilities and political institutions. It is precisely Russia’s military aggression that is now pitting Ukrainians and Crimean Tatars against Russians living in Crimea.

On Sunday in Sevastopol, pro-Russian nationalists, some armed with whips, attacked dozens who had gathered in a pro-Ukrainian rally. In Donetsk, in eastern Ukraine, there have been numerous violent clashes between Russians and Ukrainians since Moscow sent its troops into Crimea proper and announced plans to hold a referendum on annexation. 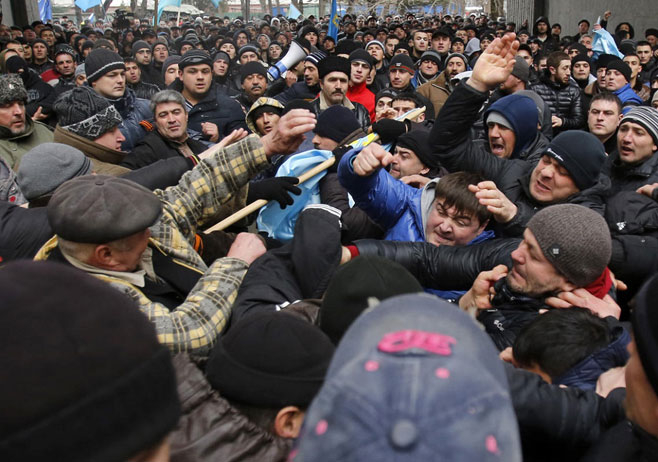 The real question is whether this inter-ethnic conflict will escalate into civil war if Russia decides to annex Crimea when such a large percentage of Crimean residents, as well as millions of Ukrainians outside of Crimea, oppose annexation.

This was the other justification for the Federation Council’s decision to approve military intervention. The Foreign Ministry claimed that on Feb. 28, forces loyal to the new government in Kiev attempted to seize Crimea’s Interior Ministry building in Simferopol. This attempt to fabricate a casus belli was a complete failure. There was no evidence whatsoever of an attempt to seize the Interior Ministry building – not one broken window or broken-down door, much less casualties, which the Foreign Ministry claimed had occurred. At least with the 1933 Reichstag fire, the Nazis actually set the building on fire.

4. The revolution in Kiev was unconstitutional.

By shifting the focus to the “unconstitutional” nature of the revolution and trying to paint it as a “fascist coup,” Putin is trying to conceal the fact that the Maidan protests were, in fact, a widespread, moderate and grassroots movement that rose up against ousted President Viktor Yanukovych’s rampant corruption, lawlessness and autocracy.

It is odd that Putin is choosing a legal argument to oppose the ousting of Yanukovych. What, then, is the legal foundation for Russia’s military intervention in Crimea? After all, Putin, in opposing U.S. intervention in other countries, has said repeatedly that foreign intervention can be justified only with the approval of the United Nations Security Council. Perhaps this is the real reason Putin is pretending that there is no military intervention in Crimea. But who is he fooling? Even his strongest supporters understand that thousands of Russian troops have left their naval base in Sevastopol and have seized Crimean installations.

The other problem is if Putin wants to rely on legal arguments, he will have trouble explaining why Russia should not abide by the 1994 Budapest Memorandum, which guarantees Ukraine’s territorial integrity,

5. Crimea wants to be a part of Russia.

Crimeans, including ethnic Russians, joined the overwhelming majority of Ukrainians in supporting independence from Moscow after the failed coup in August 1991. Little has changed since then. Independence from Russia is still highly valued by most Ukrainian citizens, including those in Crimea and the eastern regions of the country.

There was never any serious separatist movement to speak of in Ukraine – until Russia stoked the issue of annexing Crimea after Yanukovych was ousted. Still, only the nationalist Russian Unity party in Crimea, which holds just three of the 100 seats in the Crimean parliament, and pensioners, whose only criteria for supporting annexation is that their meager pensions might increase, support the idea of joining Russia. Notably, Sergei Aksyonov ­— who was installed as prime minister of Crimea on Feb. 27 after a group of armed men seized the parliamentary building in Simferopol ­— is a leader of Russian Unity.

The majority of Crimeans – particularly ethnic Ukrainians and Crimean Tatars, who together make up 40 percent of the peninsula’s population — do not want to be a vassal of Moscow again; 70 years living in the Ukrainian Soviet Socialist Republic was enough. This is precisely why so many Crimeans, including ethnic Russians, supported Yanukovych’s program, before he abandoned it in November, to integrate closer with the European Union rather than with Russia. While many Crimeans may not like Kiev, they dislike and distrust Moscow much more.

It is precisely because of these myths and lies that RT television anchor Liz Wahl quit on the air last Wednesday, saying, “I can no longer be part of a network funded by the Russian government that whitewashes the actions of Putin.” In addition, another RT anchor, Abby Martin, said during her show: “I am against any state intervention in a sovereign nation’s affairs. What Russia did is wrong.”

When anchors of one of Russia’s top propaganda outlets start risking their careers by protesting the Kremlin’s crude manipulation of the truth on air, this shows that the Kremlin has taken its distortions, myths and lies about the Crimean invasion way too far.

Do Russians support the war in Ukraine? This question has been discussed intensely since the invasion in February. According to surveys from major Russian...
opinion Konstantin Skorkin

Ukraine’s successful counteroffensive in the Kharkiv and Kherson regions means that a large chunk of the country’s Russian-speaking southeast...