As temperatures in Moscow reached a record high for the third day in a row on Monday, hundreds of people rushed to one of the city's central squares — but not to enjoy the sunshine. Instead, they had come to express clashing opinions regarding the tense situation in Ukraine, where forces believed to be Russian have taken control of Crimea.

Two rallies, one in support of Russian authorities' actions in Ukraine and the other an anti-war demonstration, were held consecutively on Novopushkinsky Square, where police set up a fence to prevent possible scuffles between the two groups of demonstrators.

"We are demanding freedom for Russian people who want to join Russia and do not want to be controlled by a group of oligarchs and fascists," said Party of Action leader Konstantin Babkin, referring to the current Ukrainian authorities, whom Russia has refused to recognize as legitimate.

Babkin and other activists speaking at the rally mocked Western countries for saying an upcoming referendum in Crimea to join Russia would be illegal and said such referendums must be held across Ukraine, since it was the only "democratic way for Ukraine to escape bloodshed." The speakers appeared to think that Crimea had no other option but to join Russia in the near future.

Prominent Russian nationalist Eduard Limonov said Russia must regain all its territories that were lost as a result of the Soviet collapse in 1991, in response to which people began to shout "glory to Russia!" 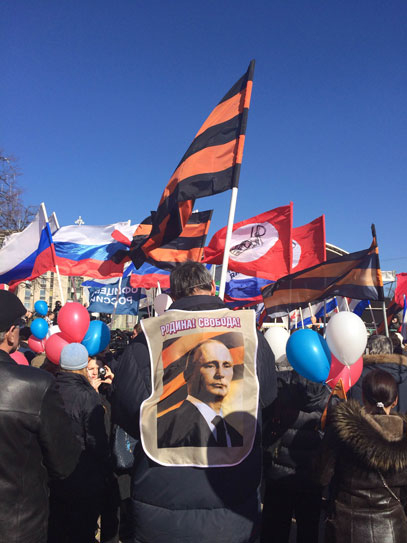 A man at a rally wearing a vest that features a photo of President Vladimir Putin and the words 'The motherland! Freedom!'"

One rally attendee, Yevgeny Ivanov, 25, said he came only to "see the faces" of those who support the actions of Russian authorities in Crimea.

"I do not believe reports that say there are violations of human rights in Ukraine and that the current Ukrainian authorities were fascist," he said. But he added that if Crimean residents voted for joining Russia he would not be against it.

People gathered at the anti-war rally said they believed people in Crimea had no choice and were being forced to vote in favor of joining Crimea with Russia.

"The Russian authorities are lying [when they say] that Crimean residents want to join Russia — obviously it is propaganda," said Yelena Ivanitskaya, 56. She said she was afraid that her children could be sent to war if Russia decided to use force in Ukraine.

"There will be nothing good about Crimea joining Russia. It will be just another hot spot in our country," she said.

Unlike the nationalist rally, the anti-war rally featured more creativity. Some of those in attendance wore costumes, including a demonstrator dressed as the grim reaper who held a placard that read: "War on corruption, not on Ukraine."

Veteran human rights activist Lev Ponomaryov visited the rally and said he believed that the nascent anti-war movement would influence the decisions of the Russian authorities.

"It is a well-known fact that those who go to pro-Kremlin rallies are forced to do so," he said, apparently referring to media reports that have said some people are coerced into attending demonstrations in support of the government. "The future belongs to free people and not to those who are ordered to come to rallies."