SOCHI — Two Russian rights activists have filed a lawsuit against the Sochi Olympics organizers after they were barred from attending the Games, their lawyer said Friday.

Semyon Simonov, a Sochi activist who documented widespread abuse of migrant workers at Olympic construction sites, and Moscow-based prisoner rights activist Nikolai Levshits both insist that they were barred because of their outspoken positions. They bought tickets for the Games and then applied for spectator passes without which visitors will not be admitted to the sports venues, and both were refused without explanation.

Rights groups including Human Rights Watch have accused Russian authorities of harassing activists in Sochi in the run-up to the games, which will be held from Feb. 7 to 23 in the Black Sea resort.

At least two other activists also have been denied access to the Games.

Russian government officials and Sochi organizers have said that the spectator pass is necessary to keep the Games safe. Some intelligence experts, however, have described the pass as an unprecedented screening measure that could be used to bar critics. Everyone who applies for the pass needs to provide passport numbers and other personal details.

The Sochi organizing committee confirmed in an emailed statement that it reserves the right to refuse to issue a spectator pass, but added that a person who buys a ticket and is refused a pass can apply for reimbursement for the cost of the ticket. The committee did not comment on the lawsuit.

Simonov said he bought a ticket for an ice hockey game in January and then applied for the spectator pass. The application is supposed to be considered within 72 hours, but in his case it took 110 hours and ended in refusal. 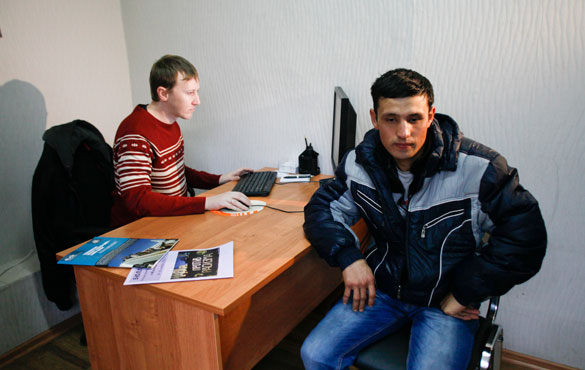 Simonov runs Migrant and Law, a small advocacy group that has provided free legal aid to workers building Olympic venues. He documented a pattern of abuse by contractors who cheated migrant workers and withheld their wages. Russian officials have recently admitted the problem and said they had allocated money for back wages.

Levshits said in a blog post last week that he had bought tickets for the Olympics and the Paralympics, but was refused a spectator pass.

"We can now speak with certainty about a political and civil filter at the Sochi 2014 Olympics," he said.

Democratic Choice, an opposition group, on Thursday reported that one of its activists from the central Kaluga region had been refused a pass, and another from the Siberian city of Irkutsk, currently working in Sochi for a service company, had his access pass to the venues withdrawn without explanation.

Democratic Choice said in a statement posted on its website that the activists do not have criminal records and that the only reason for them to be barred from the Games would be their role in the opposition movement.

Alexander Popkov, the lawyer representing Simonov and Levshits, said their lawsuit alleges that the regulations established by the Sochi organizers to screen visitors are in violation of Russia's Constitution. The suit was filed Thursday in a court in Sochi's Adler district.