If the decathlon were an event in the Winter Olympics, Alexei Voyevoda — a three-time arm wrestling world champion and a two-time Olympic medalist in bobsleigh — would be a favorite for gold.

The 33-year-old Sochi native, who still lives and trains in his hometown, has credited the city's environment for his athletic prowess, which he hopes to display in February with the Russian bobsleigh team.

"I grew up in the mountains and I would always climb trees with the other children," Voyevoda said in a telephone interview. "I was the fastest of the little tree-climbing monkeys. That is how I became strong."

At first glance, Voyevoda seems like an unlikely bobsledder. His thick biceps, sculpted by years of arm wrestling, almost seem too large to be squeezed into a 67-centimeter-wide bobsleigh. And his approach to the sport also seems a little too casual for an Olympic champion.

"Arm wrestling is a very serious thing," Voyevoda said. "Many more countries practice arm wrestling than bobsleigh. I plan to return to arm wrestling after the Sochi Games. I have many options."

Indeed, for Voyevoda, Olympic bobsleigh seems to be more of a hobby, a mere interlude between arm wrestling successes.

"Arm wrestling has helped me a lot in my bobsledding career," Voyevoda said. "My role on the team is to stop the bobsleigh. I do this with the strength I have acquired through arm wrestling."

But Voyevoda's mixed athletic allegiances have not hampered his draconian training regime and determination, which helped earned the Russian bobsleigh team a silver medal at the 2006 Turin Games and a bronze in Vancouver in 2010.

"I want to serve my country," he said. "I want to be worthy of representing Russia. The Sochi Games are close to the heart of all Russian athletes because they are being held in our country. But I feel this even more strongly because I grew up here. This is my city." 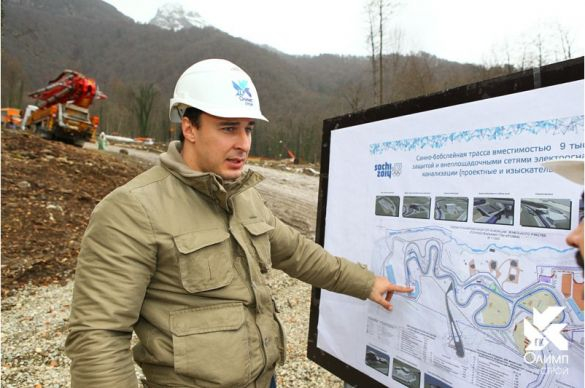 In this undated photo, Voyevoda examines the construction site of the Sochi bobsled track.

Despite his meat-lover's appearance, Voyevoda is a "green giant" of sorts. The bobsledder, who weighs in at 115 kilograms, has been a raw vegetarian for more than two years. He said he drinks only water for breakfast and "feels great."

Voyevoda's athletic feats, his Herculean build and his charisma have earned him the title of ambassador of the Sochi Games.

"My role as one of the ambassadors of the Games is to promote sport, to encourage people to adopt a healthy lifestyle," he said.

Voyevoda also expressed his hopes that the Sochi's hosting of the Olympics would encourage Russians to become more active and increase Russia's reserve of elite athletes. According to the Sports Ministry, only a quarter of the country's population regularly engages in physical activity.

"Sochi is a national project for Russia," Voyevoda said. "It will make the country even stronger on the international sporting stage."

Despite Voyevoda's predictions for Russia's future of sporting success, he was reluctant to forecast the outcome of his own races in Sochi.

"Of course I want to win gold. But I cannot predict how everything will turn out."

You can watch Alexei Voyedova and the Russian bobsleigh team compete at the Winter Olympics on Feb. 16 and 17.