Thirteen years into his rule, President Vladimir Putin remains an enigma to many people.

Is he a KGB-trained dictator and tsar mixed in one?

Or is he a patriot who managed to pull Russia from the brink of political and economic disaster and revive its clout on the world stage?

Putin himself has taken steps to allow the world to become better acquainted with his policies, and this month alone he reached out by writing an appeal to Americans in The New York Times and sat down with Russia experts from around the world in the town of Valdai for an annual meeting.

But at the same time, Putin's spokesman, Dmitry Peskov, made it clear this week that no one has the right to know anything about the president's personal life.

The fog surrounding Putin has prompted much speculation and intrigue, which sometimes go so far afield as a heated discussion last week on whether a dog in Kiev resembles the Russian leader.

In a search for answers about the real Putin, let's take a look  through the eyes of several prominent foreigners who have spent one-on-one time with him. Here are their conclusions. 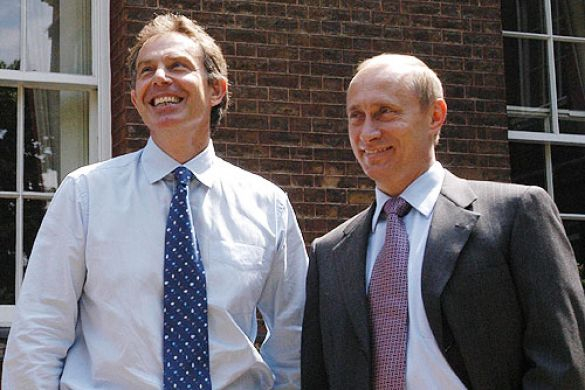 I got to know Vladimir Putin far better than I ever knew Boris Yeltsin. It was a relationship that began really well, and though over time it cooled — as a result of Iraq, but more perhaps as a result of the worsening Russia-U.S. relationship — I never forgot the initial warmth, and never gave up trying to understand what made him as he was and is.

I met him just before he took over as president in 2000, when others at that time, including [French leader] Jacques Chirac, gave him something of a cold shoulder.

We met at the Mariinsky Theater to see an opera conducted by Valery Gergiev. Putin had chosen the opera carefully. "War and Peace" by Prokofiev, written as a morale booster for Russian nationalism and caricaturing Napoleon as Hitler. It was an extraordinary occasion and all of Russian top society was there.

One thing happened which I often recalled to myself in future years. Vladimir and I walked through the beautiful corridors of the magnificent 19th-century building. In a similar situation in the U.K., I would have been greeting people, shaking hands, engaging and being engaged; with Vladimir I noticed people fell back as he approached, not in fear or anything; but a little in awe and with reverence. It was a tsar-like moment and I thought: Hmm, their politics really isn't like ours at all. (St. Petersburg, 2000) 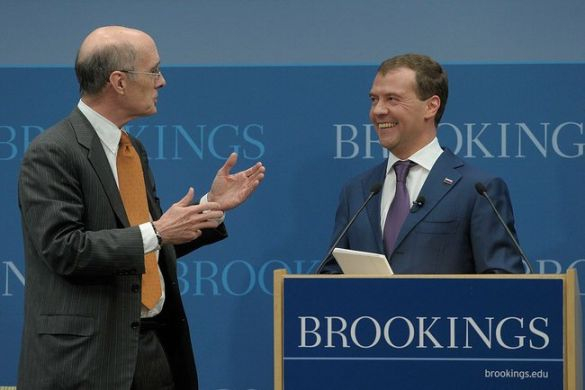 Strobe Talbott meeting with then-President Dmitry Medvedev in the U.S. in 2010. (kremlin.ru)

I went to the Kremlin to see Vladimir Putin, who was now the secretary of the Russian Security Council.

Meeting Putin for the first time, I was struck by his ability to convey self-control and confidence in a low-key, soft-spoken manner. He was physically the smallest of the men at the top — short, lean and fit, while all the others were taller and most of them were hefty and overfed. Putin radiated executive competence, an ability to get things done without fuss or friction (which had been his reputation in St. Petersburg when I'd first heard of him). There were no histrionics nor bombast, none of the mixture of bullying, pleading and guilt-tripping that I associated with the Russian hortatory style. If [President Boris] Yeltsin and [Prime Minister Viktor] Chernomyrdin were, in Marshall McLuhan's terms, hot, Putin was just about the coolest Russian I'd ever seen. He listened with an attentiveness that seemed at least as calculating as it was courteous.

With me, as with others, he wanted his visitor to know that he'd done his homework for the meeting by reading the dossier prepared by the intelligence services. He made several references to the details of my interest in Russia over the years, mentioning for example, the poets I'd studied at Yale and Oxford, Fyodor Tyutchev and Vladimir Mayakovsky. (Moscow, 1999)

From "The Russia Hand: A Memoir of Presidential Diplomacy," by Strobe Talbott (Random House, 2002) 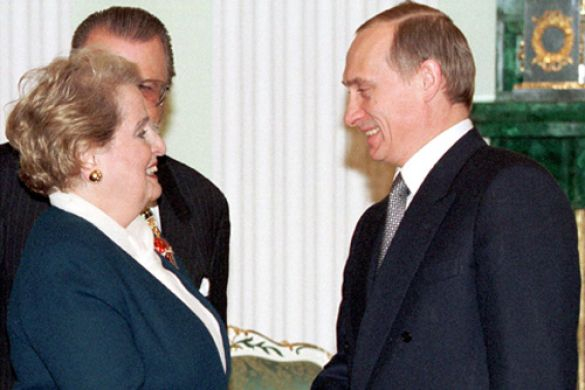 Madeleine Albright, wearing a pin of "hope," greeting Putin in the Kremlin in 2000. (kremlin.ru)

In Moscow in January 2000, I became the first senior American official to meet with Putin since he became acting president. His first comment when I arrived at the Kremlin focused on the pins I was wearing, showing two hot air balloons. I said they were to show how hopes in Russia were rising.

Throughout, I was trying both to listen to Putin and to size him up. I knew from his own writing and interviews that he was proud of his father's service in the military during World War II and had grown up wanting to work for the KGB, which he did. He loved Russia and was clearly embarrassed by the depths to which it had fallen. Putin was younger and more modern in his outlook than either [Boris] Yeltsin or [then-Foreign Minister Yevgeny] Primakov. He spoke confidently and, when I talked, took notes as if organizing his thoughts, looking up at the translator with expressionless blue-gray eyes. (Moscow, 2000) 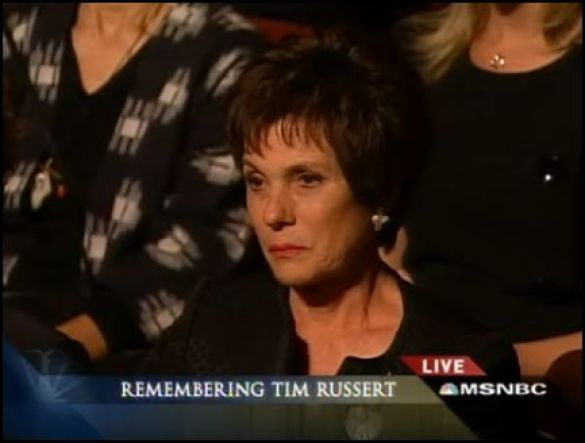 The United States-Russia summit in Moscow …

I was sitting in the front row during the signing ceremony … watching Putin, whose skin is yellowy beige, slump in his seat in the newly restored St. George's Hall in the Kremlin and absently drum his fingers on the table while a tired-looking [Bill] Clinton read from his notes about the summit's "successful" conclusion with a joint agreement for each to destroy 34 tons of plutonium intended for nuclear warheads. Several hundred journalists present were confined to four questions and sat like props at a photo op. Putin had spoken without notes, yet unlike Clinton or Yeltsin or Mikhail Gorbachev, with their obvious charisma, he would have never have been the one picked out by an observer as the group's natural leader. (Moscow, 2000)

From "The Importance of Being Famous: Behind the Scenes of the Celebrity-Industrial Complex," by Maureen Orth (Henry Holt, 2004)

His Favorite Place Shocked Me 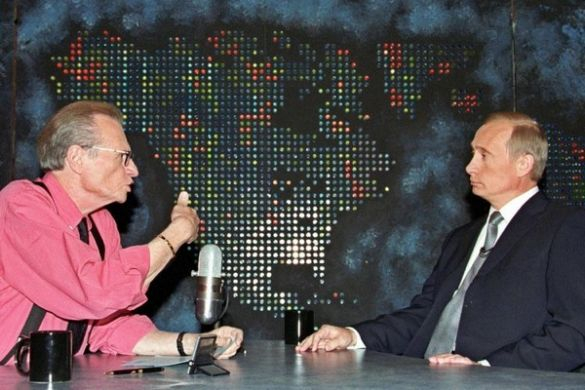 So I said, "What's your favorite place?"

That shocked me. He used to go there when he was with the KGB.

From "My Remarkable Journey," by Larry King with Cal Fussman (Viking, 2009) 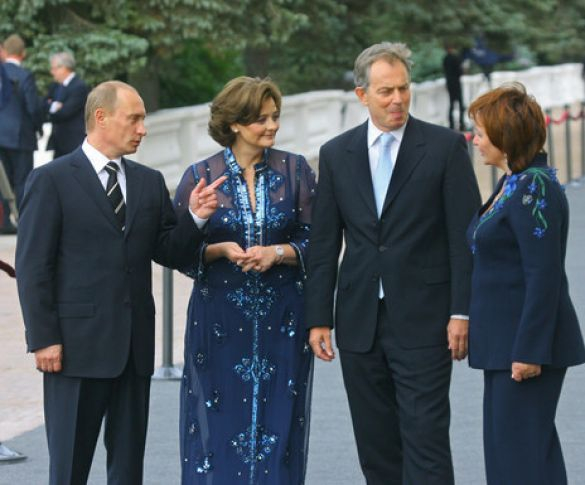 In Moscow for Tony to see Vladimir Putin …

The aim of the meeting was to persuade Putin that the UN needed to demonstrate unity so that America did not feel it would have to act unilaterally. It was the chance, Tony said, to show that in the new world order the UN did have power and that it could make things happen.

That evening, I remember, Putin was at pains to point out that, far from being a convinced communist, he had always been a man of religious faith with a strong attachment to the Orthodox Church, but I was not entirely convinced. You sensed that the former KGB chief was still there under the surface. He has a very powerful presence — he's broad-shouldered and keeps himself very fit with judo. He puts a lot of value on physical strength, his own and Russia's. This is not a man you would want to cross. (Moscow, 2002)

From "Speaking for Myself: The Autobiography of Cherie Blair" (Little Brown, 2008) 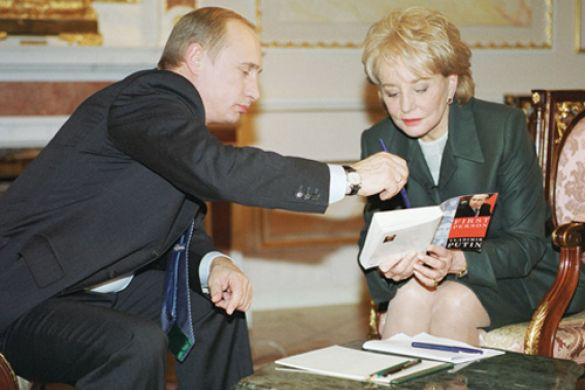 Putin signing a copy of his "First Person" autobiography for Barbara Walters in 2001. (kremlin.ru)

The plan was for President Putin and me to walk down one of the Kremlin's endless marble hallways while we casually exchanged pleasantries in English. But Putin had not advanced very far in his English lessons.

"How are you?" I asked him as the cameras followed us.

"What, please?" he responded.

Not a great beginning to the piece.

The interview itself, in another elaborate room with marble floors and gilded furniture inherited from the tsars, went quite well.

A lot had been made of George W. Bush's remark on meeting Putin for the first time — "I looked this man in the eye. I was able to get a sense of his soul." (I understood, because when I do an interview I look straight in the person's eyes and I can tell by the slightest expression, a squint or a flinch, where I have hit home. Good thing for journalism students to remember.)

In any case, I agreed with Bush's assessment of Putin. He had friendly eyes and, in person, hardly seemed formidable (though he held a black belt in judo). He was small and lithe and easy to talk with, even through the interpreter. (Moscow, 2001) 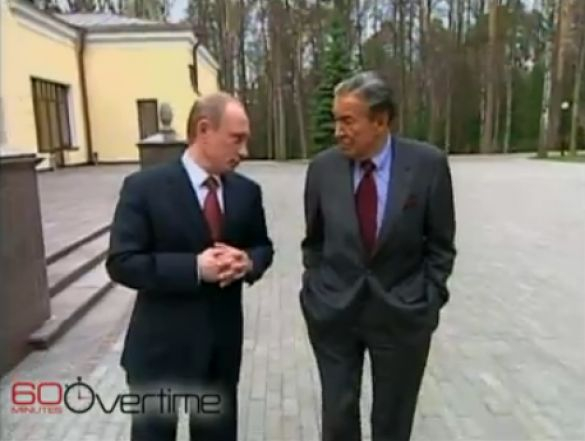 A TV image of Mike Wallace with Putin at the presidential residence outside Moscow in 2005. (cbs.com)

Putin and I, it turned out, were quite comfortable with each other. He spoke Russian on camera and idiomatic fluent English off camera. He was amiable, savvy, talkative. And neither he nor [his press secretary Alexei] Gromov asked for my questions ahead of time.

Putin, the inscrutable former KGB agent, the tough-guy president labeled by some a dictator but who calls himself a democrat, had been anointed by Boris Yeltsin as his successor in dealing with the greedy oligarchs who had made themselves billionaires by buying up Russia's natural resources — its oil, its energy, its state-owned industries — at bargain basement prices, with Yeltsin looking on.

Putin surprised me by his willingness to talk about things like the clout of the oligarchs, most of whom are Jewish, and he spoke candidly about the resurgence of anti-Semitism in Russia, which he deplored. (Moscow, 2005) 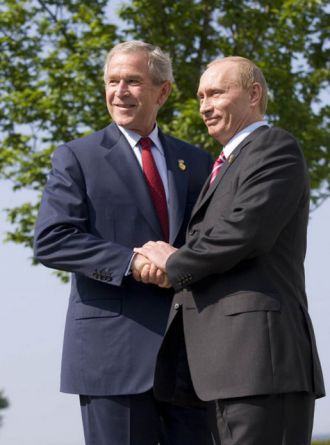 George W. Bush and Putin attending a G8 summit in Germany in 2007. (whitehouse.gov)

Over my eight years as president, I met face to face with Putin more than 40 times. Laura and I had wonderful visits with him and his wife, Lyudmila, at our home in Crawford [Texas] and his dacha outside Moscow, where he showed me his private chapel and let me drive his classic 1956 Volga. He took us on a beautiful boat ride through St. Petersburg during the White Nights Festival.

I invited him to Kennebunkport [Maine], where we went fishing with Dad. I'll never forget Putin's reaction the first time he came into the Oval Office. It was early in the morning, and the light was streaming through the south windows. As he stepped through the door, he blurted out, "My God … this is beautiful!" It was quite a response for a former KGB agent from the atheist Soviet Union.

Compiled by Dana Cook, whose collections of literary and political encounters have appeared in a wide range of newspapers, magazines and journals. Contact: danacook@rogers.com.

The Russian embassy in Berlin on Wednesday denied maintaining links to far-right terror groups in Germany after a Russian woman was among 25 people arrested...
toxic topics

The Kremlin has urged members of the presidential Human Rights Council “not to upset” Russian leader Vladimir Putin with thorny questions about...
travel sidelined

Western airlines should prepare to return to Russian airspace when the war in Ukraine has ended, the head of the global airline trade group said Tuesday...