Pictures of a golden eagle in  Russia's Far East bringing down a deer several times its size have captured the attention of readers and animal experts worldwide.

Experts say the pictures published in this month's Journal of Raptor Research represent the first ever photographed eagle attack on a deer.

Linda Kerley from the London's Zoological Society told the Daily Mail that she has never seen such an attack in her 18 years studying deer deaths in Russia.

The images, captured by zoologists in the Lazovsky district of the Primorye region in 2011 who were hoping to photograph Siberian tigers, show the eagle descending on its unsuspecting prey from behind before dragging it away to be eaten. 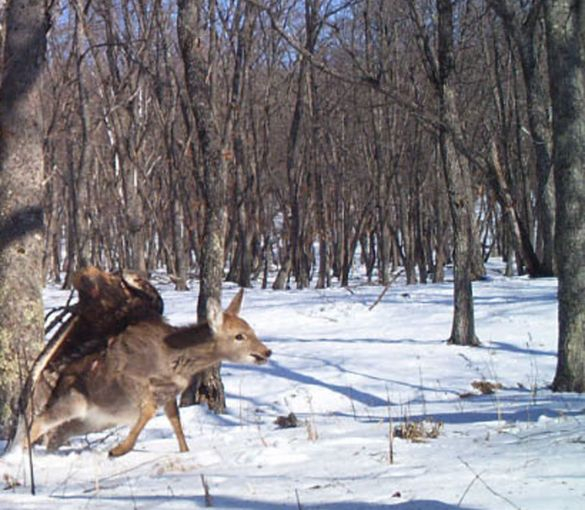 "I saw the deer carcass first as I approached the trap on a routine check to switch out memory cards and change batteries [in the camera that took the pictures], but something felt wrong about it. There were no large carnivore tracks in the snow, and it looked like the deer had been running and then just stopped and died," Kerley said.

Jonathan Slaght, from the Wildlife Conservation Society, said that eagles, especially golden eagles, often attack prey much larger than them, including a case in 2004 when an eagle took down a brown bear cub. 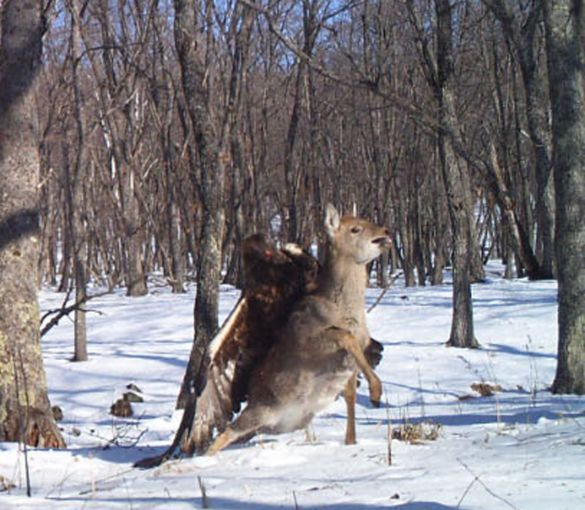 The pictures were taken by a camera trap set up to monitor Amur tigers in the region. (Wildlife Conservation Society)

Europe, Asia and North America all have large populations of golden eagles. On average, the birds weigh about 5.5 kilograms, have a wingspan of 2.4 meters and can fly up to 160 kilometers per hour.