Editor's note: This is the sixth in a series. For links to the first five articles, click here.

For Ivan Chesnokov's 18th birthday, his mother and stepfather redecorated his room in floor-to-ceiling posters of a fluttering American flag and the Manhattan skyline. On the wall, they hung a clock whose design was inspired by the Red Hot Chili Peppers, the California rock band.

Chesnokov thus returned from a year in the United States to find his room thoroughly "Americanized," and he was thrilled about it. "It's just cool. It's beautiful, it's comfortable," he said by Skype, wearing a bright yellow American Eagle-brand T-shirt.

A native of Kirov, Chesnokov is one of about 250 Russian teens who spent the past academic year living in America, mostly in small, rural towns, where they stayed with host families and studied at local high schools as part of the U.S. State Department's FLEX exchange program.

FLEX, short for "Future Leaders Exchange," has sent more than 7,000 teens from across the former Soviet Union to the United States since 1992, fostering person-to-person connections between the ex-Cold War foes and introducing a new generation to American culture and values.

Alumni of the program have become leaders in business, government and media, bringing with them the skills and sensibilities that many cultivated overseas: the English language, a can-do spirit, volunteerism and an intolerance for corruption and poor governance.

To mark the 20th anniversary of the program, The Moscow Times has been tracking program participants for the 2012-13 academic year, starting with FLEX's rigorous selection process in the fall of 2011, and ending with the students' return to Russia in late spring of this year.

In interviews conducted over Skype this month, six returnees shared their observations on American culture, including Americans' love of sports and firearms, as well as peculiar dancing and eating habits, and explained how the trip has changed their lives.

No matter where they lived, the students gave a remarkably similar assessment of the American character. Americans, they said, are kind, friendly and open. They asked lots of questions about Russia: What do Russian houses look like? What kind of currency do Russians use? What's the difference between our religions? And, of course: Are there really bears in the streets?

In Gladewater, Texas, a small town where "everybody knows everybody," people would come up to Chesnokov and just start conversations. "My community was really kind and pretty understanding," he said. "I was probably the first Russian speaker in the entire history of the town."

And Americans smile — a lot. "People there smile at each other. They're ready to help," said Darya Andreyeva, 18, a Muscovite who lived in Pocolo, Oklahoma. "People here, they may smile, but they're not as nice." She recalled how her heart sank at passport control at Moscow's Domodedovo Airport, when a cheerful "Hello!" was met with, "Remove your passport cover."

The ubiquitous American smile has been derided as vacuous, but Anton Meshkov, 18, said Americans are not less intelligent than Russians, they're just more outgoing.

"A Russian will think about something a hundred times before he says it. Americans don't have that; they say what they think." For example, it would be strange for a Russian to say, "Oh, you smell good," if he likes your fragrance. Not so in America, said Meshkov, who is from Buturlino, Nizhny Novgorod region, and spent the year on a farm in Shevlin, Minnesota, population 171.

Meshkov also noticed what he called an Anglo-Saxon proactiveness. "If something doesn't satisfy them, they try to change it really fast. Russians complain and overthink the problem."

But the kindness and good cheer exist side-by-side with a love for deadly weapons. Students were struck by the gun culture that they encountered in small towns in rural America, where gun ownership is common and hunting — a popular pastime.

Most gun owners were active hunters. Amulanga Badmayeva, 17, of Elista, Kalmykia, said her high school in Cass City, Michigan — where it was not unusual to see boys in green camouflage and girls in pink camouflage — was closed on the first day of deer hunting season. "It's in their blood."

But Americans' obsession with sports, not guns, struck Andreyeva as the difference between Moscow and Pocola, Oklahoma. At any given time, locals are either playing sports, especially basketball and American football, or watching them. "Sports is the main thing," she said.

When Andreyeva met her host father, a basketball coach, he took one look at her 176-centimeter frame and asked whether she was going to play on the girl's team, which she did despite never having played before. She discovered that athletics was a main source of school spirit and entertainment for the town.

Sports even took precedent over school in Pocola, where educational standards were low in Andreyeva's estimation. At one point, her 1oth grade English class consisted of reading aloud "Treasure Island," a classic adventure novel typically assigned to pre-high schoolers. Two or three students always passed on their turn to read, and Andreyeva wondered if they were illiterate.

School may have been easier, but some things that students used to take for granted were harder. Anna Kozlova, 16, of Penza, 550 kilometers southeast of Moscow, said that when she lived in Burlington, Wisconsin, she missed being able to get on a city bus and go where she pleased. Public transportation was virtually nonexistent in her town, and the car was king. 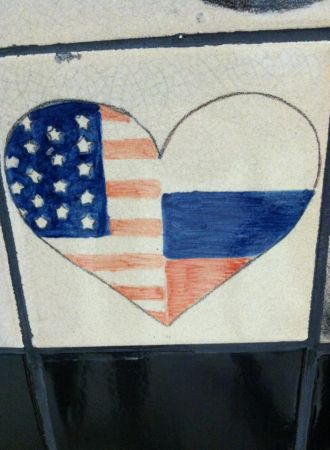 "In the states, you use the car, walk 20 feet to the car, and 20 feet to the place you're going," she said. Kozlova suspected that her newfound dependence her host family's car was one cause of the 10 pounds that she gained — a common experience for FLEX students — the others being that Americans cook less and eat more processed foods.

Every student had something to say about Americans' eating habits, and it usually wasn't positive. Yulia Abdullina, 18, also of Penza, was shocked by how much people in Oak Harbor, Ohio, love snack foods. "I couldn't understand how potato chips could be considered food. In Russia, you eat them if you're really hungry. But there, they could be part of your lunch," she said.

Food was a source of tension in Andreyeva's family. Her host mother cooked "maybe five times" throughout the year, preferring supper at fast food joints and family restaurants, including McDonalds. "They said they didn't have time to cook," she said. After Andreyeva complained that they were not feeding her enough, her family started buying vegetables and more food at Walmart.

Two Russian girls got red in the cheeks for a different reason altogether when they saw local boys and girls grinding their hips together at school dances. "It's like, what the freak? Can't you dance differently or something? But they don't even know how," Abdullina said, calling the racy move offensive to girls. "In Russia, it's more about the music."

The students made friendships that will likely last a lifetime. Kozlova, whose family had five children and almost a dozen pets, including a rat named "Fluffyball," bonded with her 22-year-old host sister. They slept in the same room, and would talk late into the night. One time, Kozlova's host sister surprised her with tickets to a concert by Shinedown, one of her favorite bands.

Taking their hosts' lead, some students got involved in local volunteer projects. Abdullina helped out at a special swim meet for children with disabilities, as well as at a homeless shelter. Chesnokov got into the habit of giving blood, something he'd like to bring back to Russia.

Program administrators hope that participants will channel the skills, can-do spirit and maturity they gained abroad into projects to improve their communities back home. Many do, and FLEX's active alumni network buzzes with volunteer opportunities.

But others aren't sure it's worth the effort, and more than a few see their future in the United States. Three students said they were actively considering applying to American universities.

Andreyeva complained that Muscovites were very negative and would not value any attempt to, for example, tidy up the entranceway to her apartment. "They'll just smoke and litter again," she said. "It's easier to move to America than to do things that require so much effort here."

She said she felt more comfortable in the United States, where the system is "more normal," and people "don't steal as much." "It feels like I should have been born there," she said, adding that she would like to move to California, having appreciated the inhabitants' laid-back attitude and found the smoothies tasty.

By contrast, Kozlova said she'd like to stay in her home country, because she feels "more in love with Russia." Her trip made her appreciate what she has, simple things like Russian cooking and a decent bus system. But she said she loved both countries, and when asked to decorate a tile toward the end of the school year, she drew a heart that was half Russian flag, half American flag.

The students say FLEX has opened doors to a better life: A good job, perhaps a position of leadership, the opportunity to travel, and the skills to make a difference.

Chesnokov said his large family, descendants of peasants and dispossessed aristocrats, was cheering him on. "I'm like a personal Jesus for my family. We're not superstars, superrich or supersuccessful. We have our moments in life. So when somebody succeeds, it's something really good."

Meshkov, meanwhile, said the trip had energized him to pursue a career in international relations without losing his Russian roots. "I want to travel around the world, but I want to live in Russia," said Meshkov, who wants to go into international relations. "Corruption and everything doesn't stop me. I'm still the one who can change it at least." He added, "People can change."

Other articles in this series:

Teens Get a Crash Course on Living in U.S.