The trial against 12 people charged with violence against police and participation in alleged mass riots in the so-called Bolotnoye case — a case observers say is one of the largest politically motivated trials in recent history — opened at the Zamoskvoretsky District Court on Thursday.

More than 400 people were detained at the anti-Kremlin protest on Bolotnaya Ploshchad on May 6, 2012, nearly 30 of whom now face criminal charges in a trial that many see as authorities' reaction to growing opposition activity in the country and that is being compared to the case against oil tycoon Mikhail Khodorkovsky in the early 2000s.

According to one of the defendants, Maria Baronova, who tweeted online from the courtroom, defendant Sergei Krivov asked judge Natalya Nikishina to recuse herself from the trial at the beginning of Thursday's hearing.

Krivov said she wouldn't be able to pass an unbiased verdict because she was “employed by Putin.” Though all of the other suspects supported Krivov's motion, the judge declined.

The hearing lasted more than seven hours and was closed to both the media and to defendants' relatives, who had to wait by the courtroom doors and applauded every time the door opened to show support.

“I hope the next hearings will be open; I haven't seen my son for a month,” said Natalya Kavkazskaya, the mother of defendant Nikolai Kavkazsky.

Ten of the defendants are currently under arrest, and some have spent more than a year in jail, which their lawyers say is a major violation of the presumption of innocence, the main principle of the European Court on Human Rights.

One of the prosecutors, however, asked the court to extend detention for the suspects for the next six months and prolong travel restrictions for Baronova and house arrest for Alexandra Dukhanina.

Despite lawyers' arguments that further arrest of their clients was unreasonable, the judge ruled to extend the arrests until Nov. 24, as well as travel restrictions.

“I will be in detention for more than 1.5 years, and that is too cruel a punishment for a crime that has not been proved,” defendant Andrei Barabanov told the court, according to Baronova.

The defendants and their lawyers insisted that the conditions of the arrest were unbearable for some of the suspects, particularly Vladimir Akimenkov, who suffers from an ophthalmic disease and has almost completely lost his vision while in detention.

“Such a trial and the extension of arrests for the next six months will irreparably damage Russia's image,” said Akimenkov's lawyer, Dmitry Agranovsky. 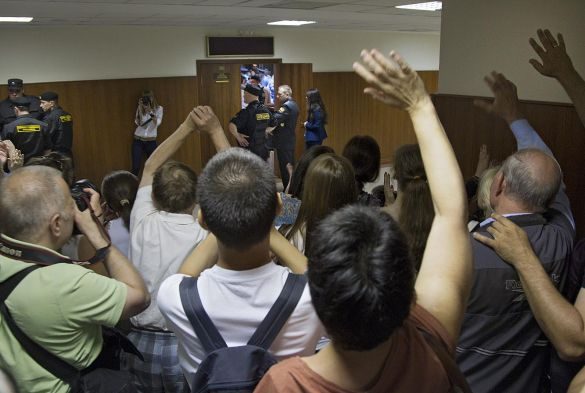 Relatives and supporters of the defendants clapping and waving to show support when the doors are opened. (Igor Tabakov / MT)

The judge refused to consider motions from lawyers asking to return the case to the prosecutor's office and also declined to put into the case file a pledge for the defendants' bail sent by Kirov region governor Nikita Belykh.

After the hearing, lawyers said they would file a complaint on the decision to extend the arrests, Interfax reported.

“Of course, we will file a complaint over this illegal decision,” said Vadim Klyuvgant, a lawyer for one of the defendants.

“Today's hearing was not a fair trial, as it played into the hands of only one side,” he added.

The opposition has repeatedly demanded that the Bolotnoye case be closed at several rallies over the last year. A series of demonstrations was also held near the Moscow City Court building where the hearing was held on Thursday, featuring both supporters of defendants and opponents.

Three people in vegetable costumes stood by with posters demanding the imprisonment of the 12 defendants and expressing support for police officers who were at the  rally on Bolotnaya Ploshchad.

More than a dozen opposition activists and members of the public showed up to demand the release of all Bolotnoye suspects.

“This is a trial against those who defended other people at the Bolotnoye rally,” said 59-year-old art historian Irina Romanova, who was at Bolotnaya Ploshchad a year ago and provided testimony for an independent public investigation into what happened at the rally.

The results of that investigation, organized by human rights activists, were published this spring and said there were no mass riots at the rally and that all the charges were false.

Head of Moscow Helsinki Group Lyudmila Alexeyeva and Mikhail Kasyanov, former prime minister and now an opposition figure, presented the results of the investigation to the European Parliament on Wednesday and called on the parliament to support the defendants.

“Many European countries have seen mass riots, but I assure you that there was no violence on the part of demonstrators on May 6 in Moscow, though there was violence by law enforcement authorities, who deliberately fictionalized the situation,” Alexeyeva said in Brussels, Interfax reported.

Activists who went to court to support the defendants on Thursday told The Moscow Times they did not believe the court would pass not-guilty verdicts.

Two people have already been convicted in the Bolotnoye case: Maxim Luzyanin received 4.5 years behind bars for participation in mass riots and violence against police, and Konstantin Lebedev has been jailed for 2.5 years for planning the riots. Both of them pleaded guilty, a move the other defendants said was a result of pressure by investigators.

“We have received investigators' documents, according to which the number of defendants in this case will soon rise to 86 people,” said Solidarity leader Ilya Yashin, who came to support the accused in court on Thursday.

The Bolotnoye case has already led to the tragic death of one opposition activist, 36-year-old Alexander Dolmatov, who took part in the May 6 rally. He committed suicide in a Dutch detention center while awaiting political asylum in January after fleeing Russia for fear of being charged in the case.

“There are enough grounds to say that in the future, up to 100 people will be charged, making the Bolotnoye case the largest politically-motivated process since Soviet times,” Yashin said.

Last week's with the U.S., NATO and OSCE on Moscow's security demands failed to reach a breakthrough.