Contribute Today
By Yekaterina Kravtsova
May 6, 2013

Thousands of opposition protesters rallied peacefully on Moscow’s Bolotnaya Ploshchad on Monday evening in a show of support for the stuttering protest movement against President Vladimir Putin’s 13-year rule.

The rally, which was timed to coincide with the one-year anniversary of violent clashes between riot police and protesters on the same square, took place despite the accidental death of a volunteer installing sound equipment for the rally, which threatened to cast a cloud over the event.

In the hours following the volunteer’s death, there was some confusion among the opposition’s ranks as to whether the rally would go ahead, and organizers were forced to address protesters from a makeshift stage mounted on a minivan.

Boris Nemtsov, formerly a deputy prime minister and now an opposition politician, opened the rally by asking protesters to hold a minute’s silence for the dead volunteer, whom he identified as Maxim Melkov. Protesters were also asked to lower their flags for the duration of the rally as a means of paying their respects.

Despite the tragedy, organizers said tens of thousands turned up to chant rousing slogans including “Russia Will Be Free” and “It’s Our Country,” filling up a fenced-off section of Bolotnaya Ploshchad.

Moscow police, who are known for giving derisory estimates for attendance at opposition protests, said that up to 8,000 took part in Monday’s rally, whereas 5,000 law enforcement officers were in place to maintain law and order. 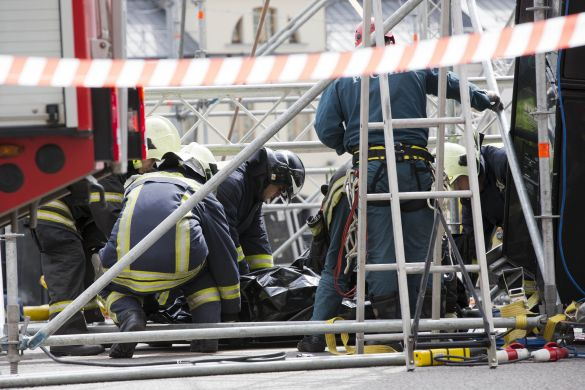 Unlike last year’s protest, where more than 400 protesters were detained, by the time the rally ended, police had detained only a handful of demonstrators, mainly for wearing masks and setting off flares.

The protest movement has been seen to falter in recent months, with opposition forces accused of being disjointed and chaotic. Turnout at street demonstrations has also dwindled since tens of thousands took to Moscow streets last spring.

On Monday, however, protest leaders put their woes behind them, rallying supporters with promises of a bright future without Putin and the Kremlin-connected United Russia party, which is widely referred to as “the party of crooks and thieves” by the ruling regime’s opponents.

Drawing attention to the so-called “Bolotnoye case,” opposition protesters held aloft pictures of the nearly 30 protest leaders and activists facing criminal charges over the violence at last year’s protest, which investigators classified as a “mass riot.”

Rally organizers dismissed the charges as fabricated in speeches from the stage and painted the defendants as “political prisoners.”

In another gesture of defiance, activists hung a banner reading “Freedom for the May 6 Prisoners” over the top three floors of a high-rise housing block on Novy Arbat early Monday morning, and the presidential human rights council called on lawmakers to back a bill pardoning all those implicated in the Bolotnoye case. 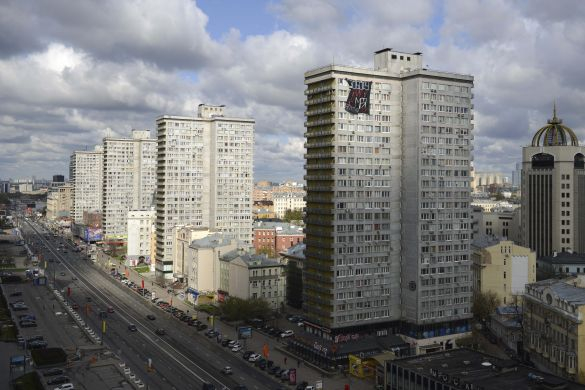 A banner showing support to protesters on Novy Arbat on Monday. It reads "Freedom to the May 6 prisoners!" (Mitya Aleshkovskiy / AP)

“Why have we taken to the streets?” ousted lawmaker Gennady Gudkov asked the crowd in a stirring address. “Because parliamentary democracy has been killed in Russia. There is not a single opposition party in the State Duma,” he answered.

Anticorruption campaigner Alexei Navalny, widely seen as Putin’s fiercest critic, took the stage near the rally’s climax, shouting in a biting tone that Putin is a “thief, hypocrite and devoid of all moral qualities.”

Navalny, who is currently standing trial in Kirov on embezzlement charges his supporters say are aimed at nullifying him as a threat, reassured supporters that he had no intention of abandoning his strident criticism of Kremlin officials.

“Someone in the Kremlin is very frightened. Together with you, I have nothing to fear. I am fighting for a beautiful future for my children, as you are. I won’t surrender and won’t go away,” he said.

Monday’s rally followed a march and rally on Bolotnaya Ploshchad a day earlier that was organized by a rival group of opposition activists who also wanted to show support for the Bolotnoye defendants. Police said that about 400 people attended that protest, which ­organizers of Monday’s rally called a spoiler.

While some protesters interviewed by The Moscow Times struck an upbeat tone, saying they were hopeful that the healthy turnout would force authorities into changing course, others were less convinced.

“I don’t really believe today’s rally can bring us any changes, but I still feel ashamed of those who didn’t come,” said Irina, a pensioner who declined to give her surname.

But Anna Bulgakova, 17, a final-year student, said: “if lots of people attend rallies, then authorities will start to listen to us.”

“A new generation with a sense of civic responsibility will grow,” she said.