Although the names of movie celebrity Johnny Depp and Yekaterina Rybolovlev, daughter of Russian billionaire Dmitry Rybolovlev, are unlikely to be found in the same gossip column, there is one thing the two have in common: they are both the proud owners of their own islands.

Spending a vacation on a private island has become a fashionable trend among wealthy Russians, real estate companies said. But while most holiday-makers in that class tend to rent a place in the middle of an ocean for a two-week getaway, some are choosing a more permanent solution by purchasing their own property.

Leasing an island for a vacation is "what Russians like very much," said Farhad Vladi, the owner of Vladi Private Islands, an international island brokerage with a 40-year history.

A new real estate trend sees wealthy Russians purchasing their own floating islands, but with prices from $10 million, some opt to rent.

Russians accounted for a significant part of the 26,000 islands leased out by his firm over the last eight years, Vladi said.

"They book an island for two weeks and if they like it, they come back to us the following year and book another island," he said.

Island rental options for every taste and budget are available online. Vladi said rental rates for the islands his company offers range from $1,000 per night to $10,000 per night.

Meanwhile, some island brokers said they were seeing a growing interest from Russians willing to buy properties in the most popular destinations.

In one example, the Maldives could see a flock of potential buyers from Russia after the island nation's government lifted a ban against foreigners buying property a couple of years ago.

The Maldives are a favorite travel destination for Russians, which account for over 20 percent of tourists visiting the country annually, said Paul van de Camp, chief executive of Dutch Docklands, a Netherlands-based construction company specializing in development of real estate that actually floats. Their business model aims to not only persevere, but actually take advantage of global warming trends, that foresee water levels rising over the coming years.

In 2010, Dutch Docklands agreed to establish a joint venture with the Maldivian government to build water-fronted properties in the Indian Ocean that would include a complex of oceanfront villas, an entire golf course that floats on the surface of the water, a floating hotel and a group of individually designed islands. The construction of the project is expected to kick off within the next few weeks, said Van de Camp, who came to Moscow for the first time last week to meet potential buyers for those properties.

"They love the Maldives, the quietness, the nature, and it's very important that they have money to spend there," he said, adding that the island country was one of the world's most expensive tourism destinations.

He said his company was testing the waters in Russia after a bundle of high-profile businessmen expressed interest in buying the floating islands Dutch Docklands will build in the Maldives. 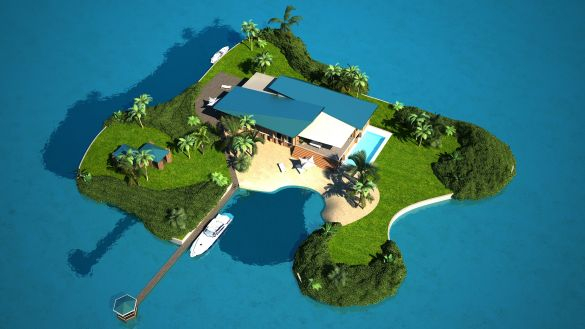 A 3D simulation showing an individually designed floating island in the Maldives. Prices start at $10 million. (Courtesy of Dutch Docklands)

"We wanted to see what the Russian buyers are looking for in the Maldives, and we found out that they are interested in very exclusive properties that nobody else has," van de Camp said.

He also said that about 15 potential customers from Russia considering purchasing a private island in the Maldives had approached his company since the beginning of this year. He declined to specify their names, citing confidentiality.

Dutch Docklands, which claims to have a 300-year experience in buoyant construction, offers customers private floating islands in the Maldives that would be designed and built according to their own specifications. The parameters a buyer can set include the size of the property, the facilities and the infrastructure, like a villa and a boat berth.

‘[Buyers] love the Maldives, the quietness, nature, and it’s very important that they have money to spend there.’
Van de Camp

Van de Camp said he was confident that deals to sell floating islands to Russian clients would materialize. He added that the most common reasons behind buying such properties were spending a family vacation or holding meetings with business partners in private surroundings.

Although having your own island is a good solution for those seeking privacy, brokers pointed out that this segment of the market for high-end properties is very limited, especially when it comes to owning a natural island.

"Not everyone needs or wants to buy an island," said Joachim Wrang-WidОn, director of affiliate services at the real estate division of Christie's auction house.

"A lot of people who buy islands think that they would live like a Robinson Crusoe, but then it turns out that they need electricity, cold and hot water, heating. So running an island actually costs a lot," he said during a visit to Moscow last week.

Properties advertised by brokers online include dozens of options in any part of the world, with prices ranging from slightly over $100,000 for a simple plot of water-locked land to hundreds of millions dollars for fully equipped islands ready for civilized life. Locations include Bahamas, Fiji, French Polynesia and the Greek isles.

Meanwhile, deals with Russians buying private natural islands can be calculated on your fingers. The most high-profile example that made headlines over the last few weeks is Yekaterina Rybovleva's purchase of the Greek island Skorpios — the place where shipping tycoon Aristotle Onassis married Jacqueline Kennedy.

Buying natural islands is not common for Russian customers, since such properties are "a big responsibility" and a very costly enterprise, said Vladi, the international broker.

The only deal of that kind handled by Vladi Private Islands was selling a Spanish island of about 20,000 square meters to a Russian family 10 years ago, he said.

The children marched with portraits of the president and quotes from his speeches in military-style uniforms.
'smart voting'

LIVE | Coronavirus in Russia: The Latest News | May 7