ST. PETERSBURG — Enlisting the drama of Prokofiev and the elegance of Tchaikovsky, St. Petersburg's new Mariinsky Theater staged a gala opening designed to silence critics of the starkly modernist building erected in the heart of Russia's imperial capital.

The $700 million glass and limestone building, which critics have dubbed the "Mariinsky mall," glowed in the night sky, its glass and metal walkways humming with excited voices as the select crowd of 2,000 found their seats late Thursday.

Just opposite, across a canal, the 19th-century original opera house, one of the great showcases of Russian culture that became home to the Kirov opera and ballet companies in Soviet times, stood silent for the evening. 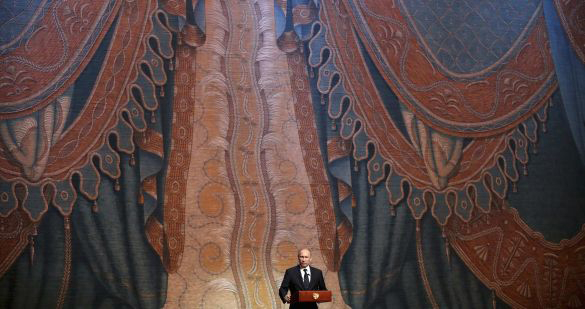 
"We need breathe life into the theater. We want it to live, so that people are attracted and can feel the charm of modern technology. Then it will shine in all its glory," President Vladimir Putin told the guests, who included leading Russian businessmen.

Calling the Mariinsky by its affectionate short name Mariinka, Putin said the theater had always preserved the best traditions of the Russian arts, never losing "its shine."

"Seven hundred and sixty performances a year! And each one is world class. No artistic team in the world does that," he said.

Putin praised Valery Gergiev, director of the Mariinsky and regarded by many as the greatest living orchestral conductor, for pursuing a project that had been conceived just before Russia's financial crash of 1998.

"In 2003, Gergiev raised the issue again and a new project arose," Putin said, referring to a decision made after he became president in 2000. 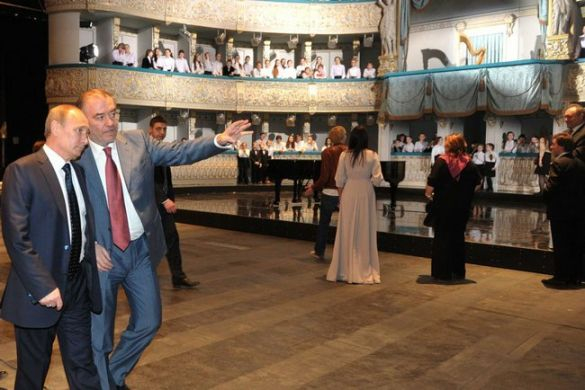 The Mariinsky II is one of several grand projects sponsored by Putin intended to show what Russia can achieve, most notably the 2014 Sochi Winter Olympics.

Gergiev, whose 60th birthday coincided with the gala, had been criticized for commissioning a sleek, modern building that some say sits awkwardly among its pastel colored 19th-century neighbors.

But in the end only two people protested outside. One of them, a woman, held a banner mocking Gergiev's recent Hero of Labor award received from Putin on Wednesday, suggesting the conductor should either pull down the building or hand back the medal.

The conductor, a loyal ally of Putin, had shrugged off the criticism, saying the Mariinsky needed a new stage and state-of-the-art technology to produce the kind of theater people expected to see today.

"People asked why do we need new architecture? Why does St. Petersburg need a new opera house? I think the best way to answer those questions is simply to let people come in," he told a news conference.

Many guests were impressed. Light bounced off wall panels made of Italian onyx that stretch several stories high and the sound was excellent.

"I like the theater and I liked the concert. It's a contemporary theater with great potential," said former Finance Minister Alexei Kudrin. "I love theaters and have been in many great theaters in different corners of the world. I think it is worthy of becoming one of them." 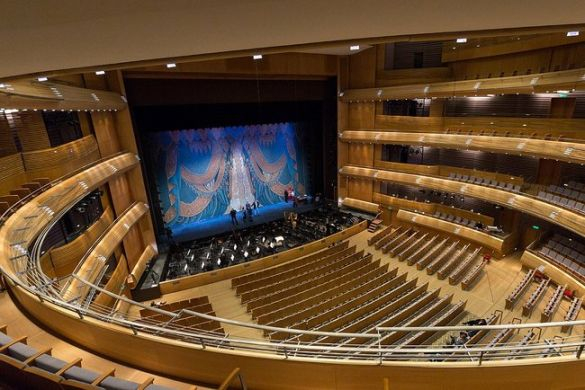 An overview of the new hall, which has seats for 2,000 people. (Kremlin.ru)

The simple light wood of the balconies and aisles was a world away from the original Mariinsky Theater, which was sumptuously decorated in gold and red. Only the VIP box in the Mariinsky II has a slight nod to extravagance — a modern chandelier to make prominent guests feel at home.

The gala opened with a dramatic excerpt from Prokofiev's "Romeo and Juliet" ballet and included the coronation scene from Mussorgsky's opera "Boris Godunov," when the vast stage swarmed with peasants.