Contribute Today
By The Moscow Times
May 2, 2013

UTAMYSH, Dagestan — A mess of rubble, ash and charred vehicles is all that's left at the desolate farmhouse where a Canadian Muslim convert died fighting his last battle alongside Islamist insurgents in Dagestan.

At the time, few people beyond local villagers noticed William Plotnikov's death in a region where skirmishes occur daily. But almost a year on, Plotnikov has emerged into the limelight following the Boston Marathon bombings.

The abrupt transformation of a Russian émigré into a die-hard rebel fighter draws eerie parallels with the life of Tamerlan Tsarnaev, the son of Chechen immigrants in the U.S. who is now prime suspect in the Boston attack.

In the village of Utamysh, a collection of squat houses in a valley ringed by the steep mountains of Dagestan, Plotnikov is known simply as "Kanadets," or "the Canadian."

"The Canadian, I saw him twice, yes. He came to the mosque. He looked like everyone else," Arslangerei-haji, a local imam, said at his small village mosque.

"He'd just pray and leave. He was out with the others in the forest," he added, using a local euphemism for joining the militants fighting Russian rule of the North Caucasus.

On July 14, federal forces surrounded the rebels near Utamysh and pounded them with artillery. Part of the farm where Plotnikov and his fellow fighters were hiding was reduced to rubble. At least seven people, including Plotnikov, were killed.

Since last month's Boston bombings, attention has turned to others who may have followed similar lives to Tsarnaev. Novaya Gazeta newspaper and Canada's National Post have reported in detail on the last years of Plotnikov.

An ethnic Russian who emigrated to Toronto with his parents as a teenager in 2005, Plotnikov converted to Islam as a young man and flew to Dagestan to join the Islamist militants.

There is no evidence Plotnikov knew Tsarnaev but some similarities are striking. Both were young men when they plunged into Islam, possibly out of frustration with the challenges of their adopted home countries, and both were passionate boxers. 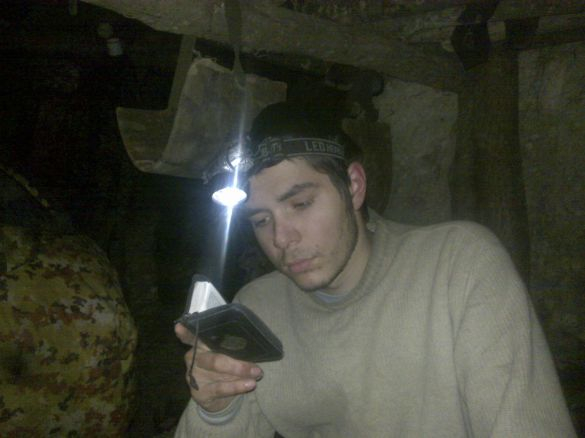 Plotnikov reading the Koran in this undated photo released by the Dagestani branch of the FSB. (Reuters)

Plotnikov's bemused father, Vitaly, described how his son changed from a typical teenager who borrowed his father's credit card to go skiing to someone devoted to prayer. "Somebody changed his mind in Canada," he told CBC TV. He said he thought Tsarnaev had had the "same problem."

Both Plotnikov and Tsarnaev traveled to Dagestan in the first half of 2012 to explore their religion. They lived within 120 kilometers of each other on the Caspian Sea coast.

U.S. investigators suspect Tsarnaev's experience in Dagestan played an important role in his radicalization, particularly if they establish that he met any militants during his stay at his family home in the regional capital, Makhachkala.

While Tsarnaev was with his parents, Plotnikov joined the insurgency and retreated to the rebel camp with other militants in the lush mountains south of Makhachkala, where he died.

Tsarnaev left Dagestan in a rush two days after Plotnikov's death and flew back to the U.S. via Moscow, according to Novaya Gazeta. He was shot dead by police nine months later, after the Boston bombings.

Tucked away in a remote corner of the Utamysh cemetery and overgrown with weeds, Plotnikov's grave is a simple white tombstone featuring the Islamic crescent moon and star. The Russian inscription says: "Plotnikov, Vilyam Vitaliyevich." Date of birth: May 3, 1989. He was 23 when he died. 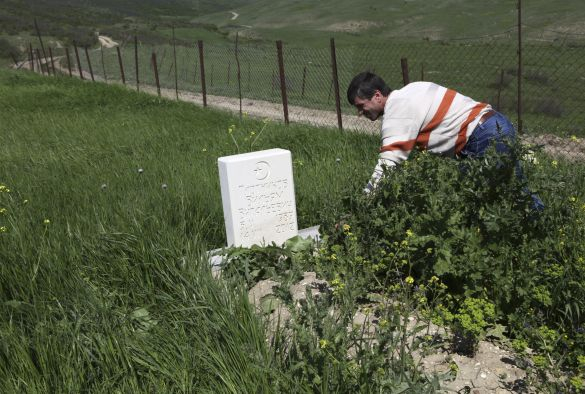 In a village like Utamysh, news travels fast. The arrival of new faces never escapes notice. Yet, when asked about Tsarnaev, villagers shook their heads and said they had never heard of him visiting their lands.

"They are both dead now. Maybe they knew each other. Who knows?" Dzhamaludin Aliyev, the village head, said with a shrug as he gazed at Plotnikov's tombstone.

"We just buried him here as a Muslim. He did not live here. He lived up there in the forest," he added, pointing at a green hill towering over the village.

Salaat, a local pensioner, said the fair-skinned ethnic Russian Canadian stood out immediately as soon as he came to the village, home to about 3,000 people.

"He came here after hooking up with some Utamysh youngsters in another village up north," she said. "He lived here for several months with them, then he disappeared into the forest."

Foreigners are rarely spotted fighting for rebels in the Caucasus, just as ethnic Russians rarely covert to Islam.

Yet, as conflicts continue in the Caucasus, nationalist claims to independence that dominated the 1990s have given way to calls for a pan-Caucasus Islamic state — including from people who went to fight in countries such Afghanistan and Syria, or those who simply view Russian rule as corrupt and oppressive.

No one knows for sure how many militants are out in the mountains but most are now believed to be based in Dagestan, particularly in the south where Utamysh is located.

For locals in Utamysh, last year's farmhouse battle was the closest the conflict had struck their homeland in many years after a period of relative peace.

Aliyev said the insurgents' bodies were initially taken to Makhachkala as part of the investigation.

But Vitaly Plotnikov, who lives in Toronto, flew to Dagestan immediately afterward and brought the body back to the village, seeking permission to bury him there, Aliyev said.

"I don't know why he didn't take the body to Canada. I guess it's expensive. So he brought the body back here," Aliyev said. "The father just said to me: 'I should've looked after him better.' For him it was a huge tragedy."

Dzhalil Alatsiyev, deputy head of the local administration in charge of security, said the insurgents had been under surveillance by Federal Security Service forces for several months.

"They never came to the village. They were hiding there," he said, pointing at the mountain range.

Describing the insurgents as Wahhabis, or adherents to one of the most austere forms of Islam, he added: "It's easy to tell them apart. They have long beards. They pray differently. We are all Muslim here. But these people are different."

The farmhouse is now deserted. Its owner has been jailed for helping the insurgents. One shed was flattened entirely by artillery fire. The main building was heavily damaged, its interior a mess of broken glass, metal and camouflage jackets. 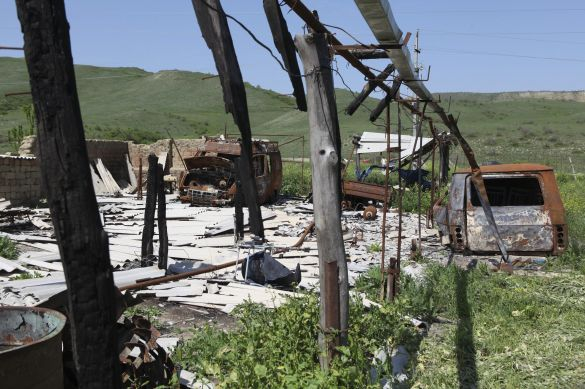 The remains of a farmhouse where Plotnikov was killed in a firefight in Utamysh. (Maria Golovnina / Reuters)

Although it is firmly under Moscow control, Dagestan has a long history of resistance to Russian rule. The valley around Utamysh was the site of fierce battles between local tribes and Russian forces sent by Peter the Great to annex Dagestan during a war with Persia in the early 18th century.

Today, speaking up for the insurgents can land people in jail. Yet even in this village, dominated by people from the Kumyk Turkic-speaking ethnic minority, some appear sympathetic.

Rashiya-hanum Adykova, a 56-year-old who runs a dairy farm high up in the hills, said she had seen militants pass through her fields but they never touched her family. "They don't do anything to us because we are just old people," she said.

The village imam said he disapproved of the tactics used against the insurgents.

"A lot of people are innocent but they are still being taken away," said Arslangerei-haji. "If they are criminals of course they should be arrested. But there is a lot of chaos here. Everyday someone is dying. We are tired of it."