Investigators have accused a top manager at the government's flagship Skolkovo Foundation of making $750,000 in improper payments to a State Duma deputy with close links to the street protest movement, according to a statement posted on the Investigative Committee's website Friday.

Alexey Beltyukov, one of three vice presidents at the foundation, whose board of trustees is headed by Prime Minister Dmitry Medvedev, attempted to hide contracts awarding $300,000 and $450,000 to Just Russia Deputy Ilya Ponomaryov for lectures and research, the statement said.

A check is underway into the lectures, as well as the "value, originality and soundness" of Ponomaryov's research proposals, it said. 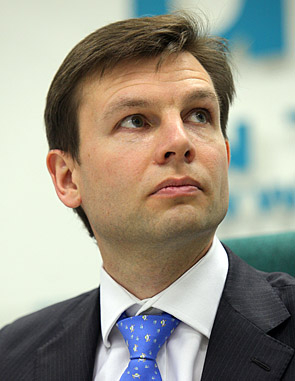 Beltyukov and Ponomaryov denied wrongdoing. Beltyukov told RIA-Novosti that the contracts were legal and “as far from a crime as possible,” while Ponomaryov described them as “normal” and said he declared the $750,000 in income, as required by law, Kommersant FM reported.

A prominent Kremlin critic in the largely rubber-stamp parliament, Ponomaryov has been an active supporter of the street protest movement that shook the government from late 2011.

Investigators said they were tipped off by Duma heavyweight Vladimir Zhirinovsky, head of the Liberal Democratic Party, who has accused Ponomaryov of slander and illegal business activity. Ponomaryov has said Zhirinovsky received a fake divorce to avoid declaring his wife's income and property.

Ponomaryov's request to have Zhirinovsky's finances checked was declined on Friday by the head of the Duma commission that monitors deputies' declarations, who said it was filed improperly.

The Skolkovo Foundation, which manages a much-touted innovation hub in the Moscow suburbs, is seen as a pet project of Medvedev, who as president launched the modernization project in 2009.

Speculation about Medvedev's waning political clout has been rife in recent months and received a new boost on Tuesday with the leak of a video showing his mentor, President Vladimir Putin, upbraiding ministers and other senior officials for the government's "poor" performance.

Ponomaryov said the charge against Beltyukov, which carries a maximum penalty of 10 years in prison, amounted to a joint strike by pro-Kremlin conservatives and oil and gas interests on the opposition, the Skolkovo Foundation's billionaire president Viktor Vekselberg, and a key modernization project.

"They're fighting to keep Russia reliant on natural resources," he said.