Tikhomirova is the director of Step Up, a center providing supplementary education to 120 orphans incongruously housed in Moscow's Anglican Church, a short walk from the Kremlin.

Other useful sections of the booklet include how to seek redress if you are fired from work, information about your passport ("a very important document that you must look after carefully and try not to lose"), and a page and a half on the dangers of AIDS.

Amused, Tikhomirova pointed out a lyrical introductory paragraph on what it means to be an adult: "You will learn how to look at yourself with irony," it read.

Despite some superficial improvements, little has changed in the essence of Russia's vast orphanage system, nor in post-orphanage care, since the collapse of the Soviet Union.

There are no tracking mechanisms for the 20,000 young adults leaving orphanages every year, and statistics suggest only about 10 percent successfully adapt to normal life. Alcoholism, drug addiction, criminality and suicide take the rest.

"Social passivity and sponging off people are the most harmful legacies of an institution," Tikhomirova said.

As philanthropic traditions become more entrenched, however, the number of organizations that are investing in long-term solutions continues to grow. Such charities use a variety of approaches to help foster social integration, from art projects to mentoring. Step Up focuses on education.

Gennnady, 23, grew up in Moscow correctional orphanage number 80 and has been coming to Step Up since 2002. Step Up requested the surnames of its students not be published.

Since he completed Step Up's educational programs, his visits, once or twice a week, are purely social. He now studies once a week at the Institute of World Economy and Information Technology and works as a logistics manager.

There are nine types of orphanages in the Russian state system, ranging from those for "normal" children, to orphanages for those diagnosed with "oligophrenia," a severe form of developmental disability.

"The question is not whether it's a good or a bad orphanage," said Tikhomirova, who also works full-time as a high school history teacher. "They just don't prepare children for the rest of their lives."

Another Moscow-based charity, Big Change, also uses education to aid social integration. It is visited regularly by 60 young people, aged between 13 and 30.

Present-giving to orphans and orphanages has increased in recent years and is currently at "monstrous" levels, she said.

A particularly clear manifestation of the "parasitism" that this type of philanthropy can help engrain on those who grow up within the system is the abuse of the free apartments provided by the state.

About 80 percent of the "orphanage graduates" who receive such accommodation do use it for living: They move in with friends, renting out their apartments so they do not need to work.

"The issue is not with the 'problems' that these children have, but with the fact that they are not given any opportunities to resolve them," said Anna Ulyanova, Step Up's psychologist.

Evening classes at Step Up take place in the bowels of St. Andrew's Church in battered rooms with broken lights and empty bookshelves.

A Russian language lesson visited by a Moscow Times reporter flickered between moments of silent concentration and moments of uproar.

Allowing discussion to occasionally swerve off into good-natured humor to break up the tedium of grammar, Mikhail Sverdlov, who has taught at Step Up for a decade, responded in kind. He told one student his answer was like "a basketball that rolled around and around the hoop before bouncing out."

Most of the children who come to Step Up live in correctional orphanages, a middle bracket of orphanage straddling those with behavioral disorders and developmental delays, who are routinely educated only to the equivalent of the 5th grade of normal school. They are then assigned to technical colleges for compulsory vocational training, where most have little interest in the profession that they end up studying.

Olga, 21, one of the students in Sverdlov's class, has attended Step Up for three years. "I have grown up a lot since I started coming here," she said. "If I didn't like it I would never have come back after the first time."

The aim is to widen horizons, said psychologist Ulyanova. "We mitigate their estrangement, their mentality that they're different and will remain different forever."

But sometimes the opportunities can be too much, and the drop-out rates at all organizations working intensively with orphans are high. 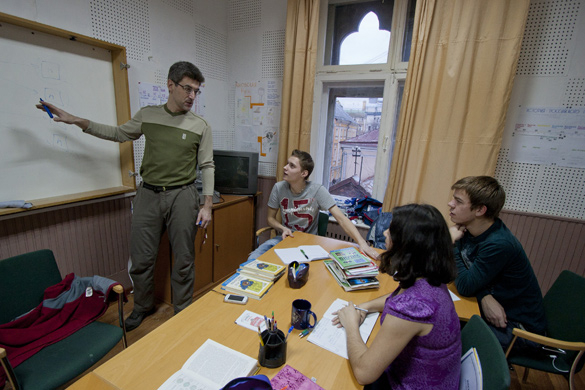 "If you've spent your whole life being told what to do and then you land up in a 'free' place like this, people can lose themselves," Ulyanova said.

The financial base of organizations like Step Up and Big Change has been widening in recent years as traditions of corporate giving and private charity spread in Russia. But similar set-ups are still extremely rare in regional cities because of the difficulty of finding funds.

Western companies working in Russia have long provided the bulk of Big Change's approximately $320,000 of annual funding, said Ryazanova, but now the balance is tipping towards Russian companies.

The flow of money to charities developing long-term projects, however, is dwarfed by that pumped directly into the system of state institutions.

Companies often decline to name exact amounts, but Sberbank, Russia's biggest lender, supports 25 percent of Russia's orphanages, while state-owned oil pipeline monopoly Transneft has said that paying higher dividends would mean a decrease in the aid it gives to orphans.

Some see positive changes in the system of state institutions.

"There is a big difference from 20 years ago," said Maria Yeliseyeva, head of Maria's Children, a charity that has been using art to engage orphans since 1992. "And community control will increase."

But even Prime Minister Dmitry Medvedev has criticized orphanages as "more conducive to the isolation of children than their socialization," and few expect any dramatic improvements.

"Russia's orphanage system is huge and there is a lot of institutional inertia," said Andrei Kortunov, president of the New Eurasian Foundation.

"Any attempt to dismantle it, even if it comes from a high level, will be almost certainly suicidal for its initiators."

Material donations (especially clothes and toys) to orphanages or short-term volunteer contact with vulnerable children should be avoided if you are actually seeking to help those in Russia's state institutions. Many of the best orphan charities in Russia offer constructive ways in which volunteers can channel their energies and hold fundraising events, as well as receiving donations. They include: