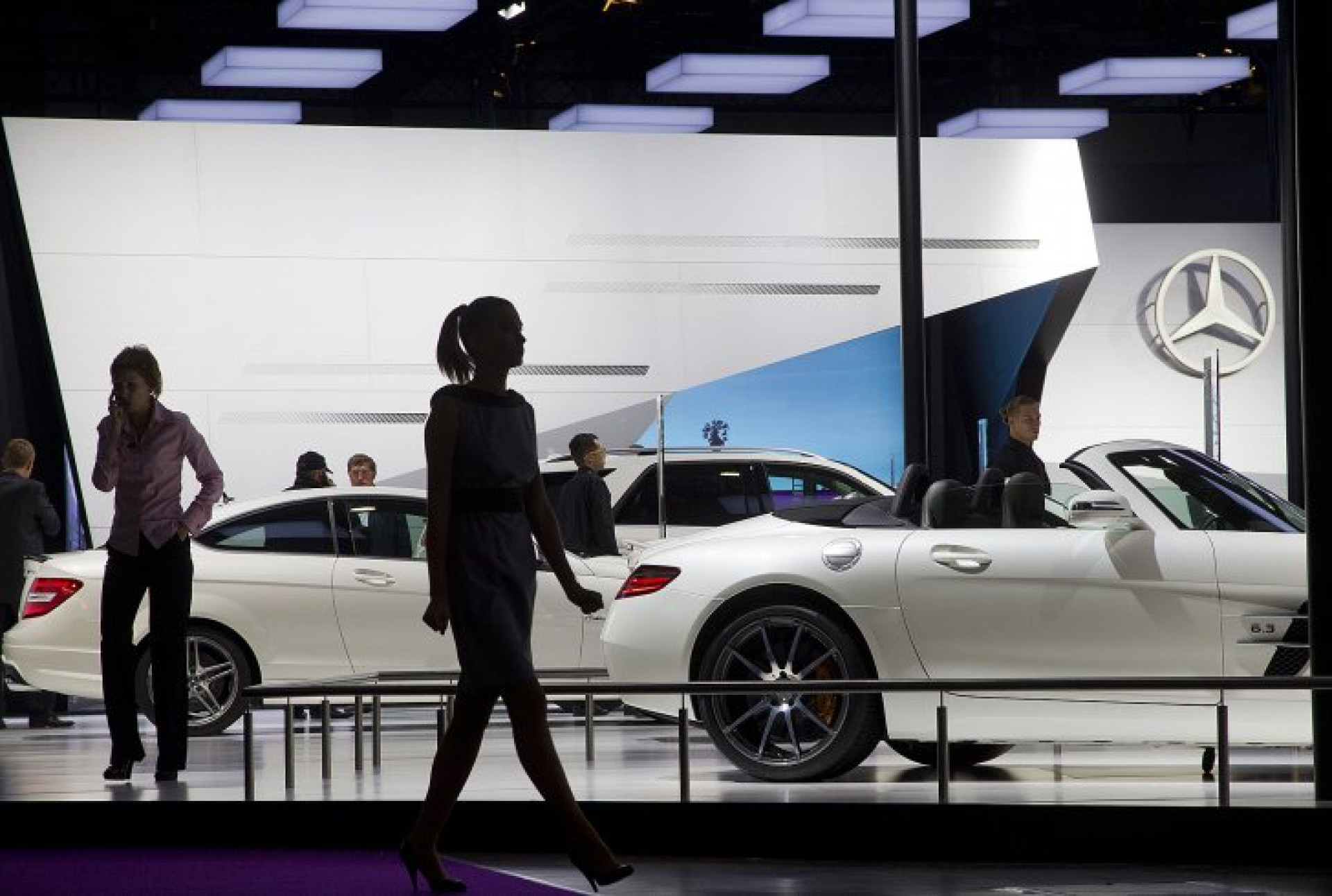 People looking at Mercedes cars on the first day of the Moscow International Automobile Salon in Krasnogorsk, just off the Moscow Ring Road, on Thursday. The expo runs through Sept. 9. Igor Tabakov 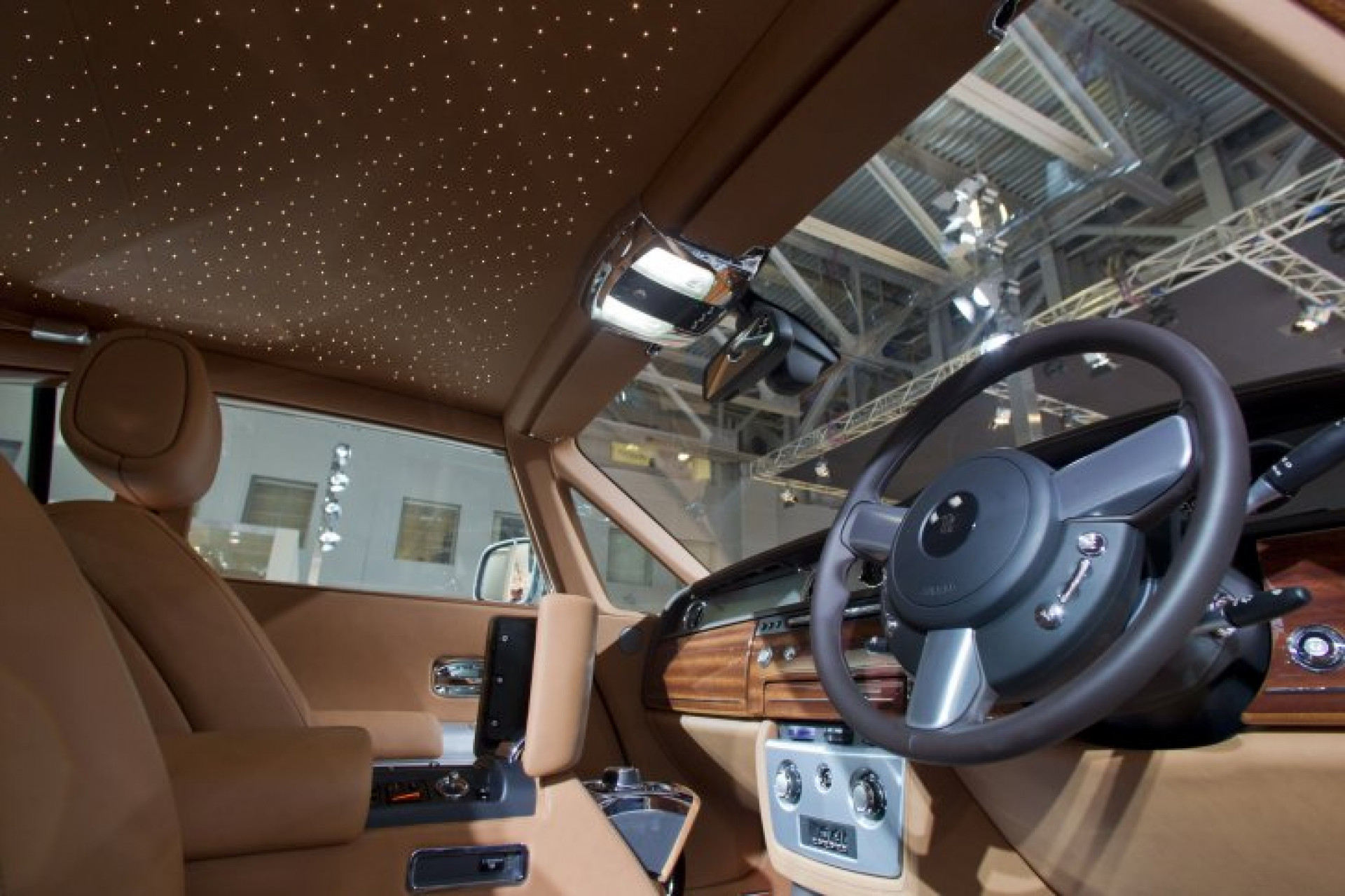 The interior of a Rolls Royce Phantom Coupe Aviator Collection, which will have a limited production of 35 cars. Igor Tabakov 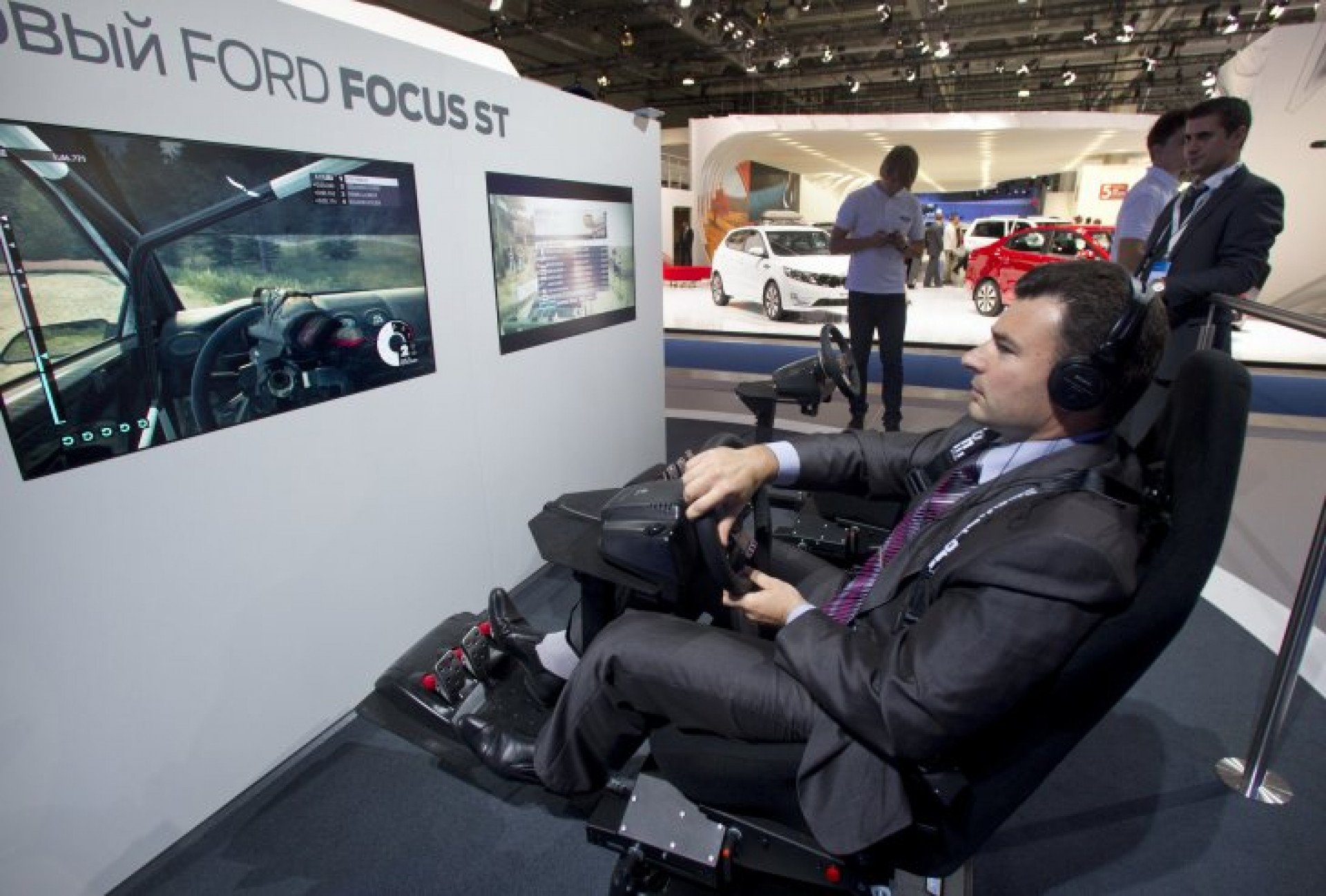 On the racetrack. A man test-driving a Ford Focus ST, the sports car version of the best-selling economy hatchback. Igor Tabakov 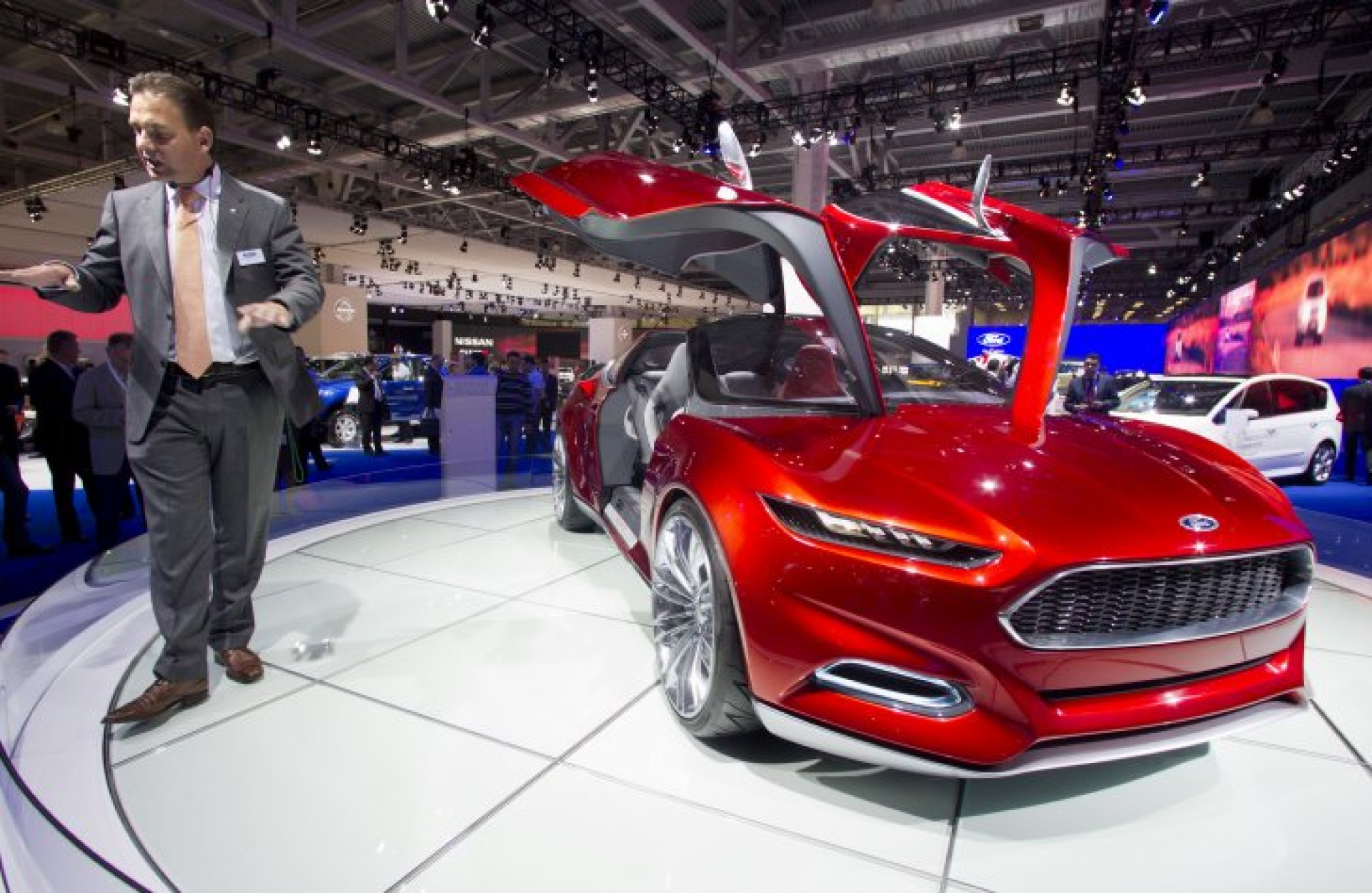 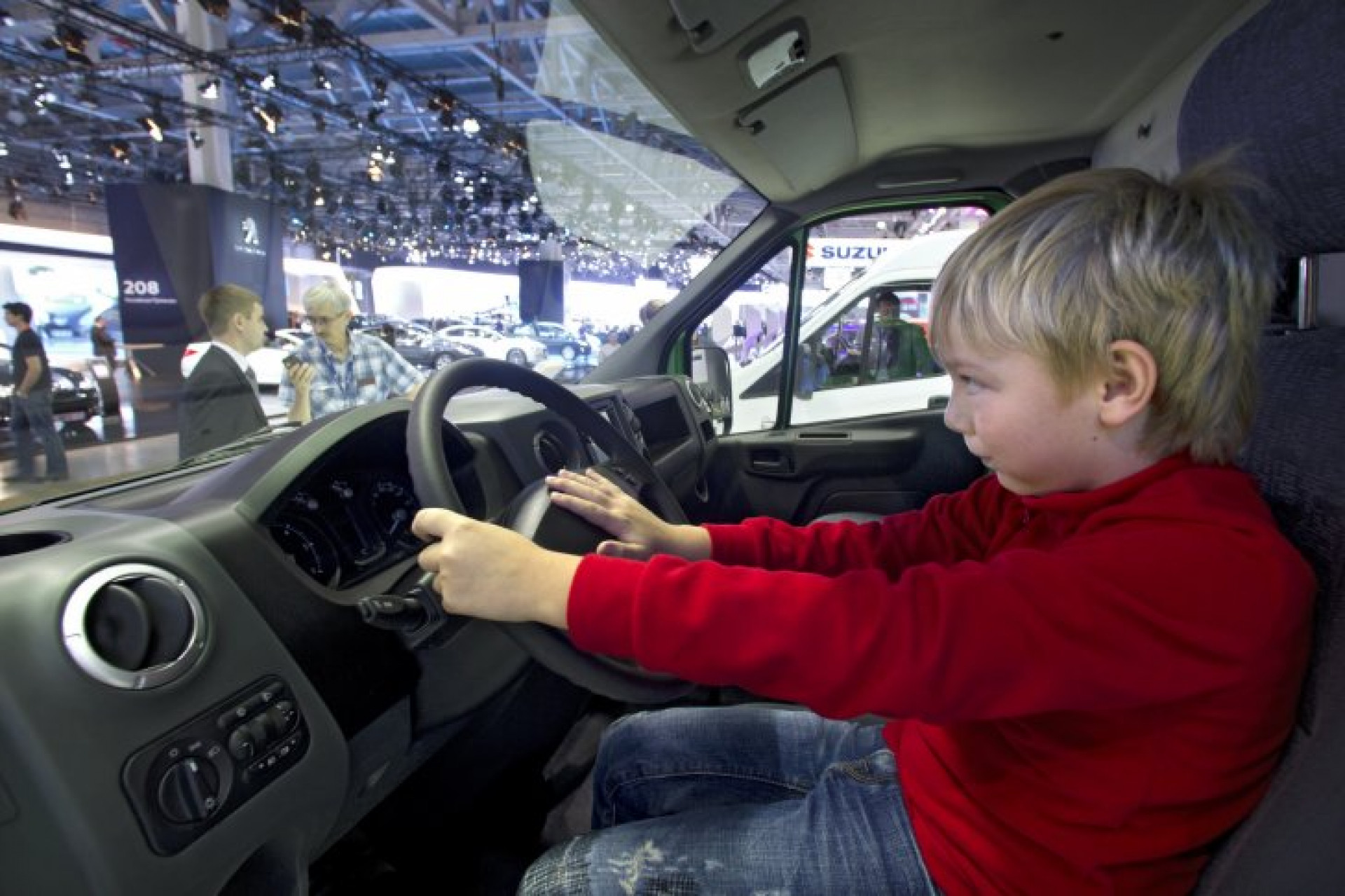 A boy getting a feel for a GAZ Next truck, part of a new family of commercial vehicles that will go on sale next year. Igor Tabakov 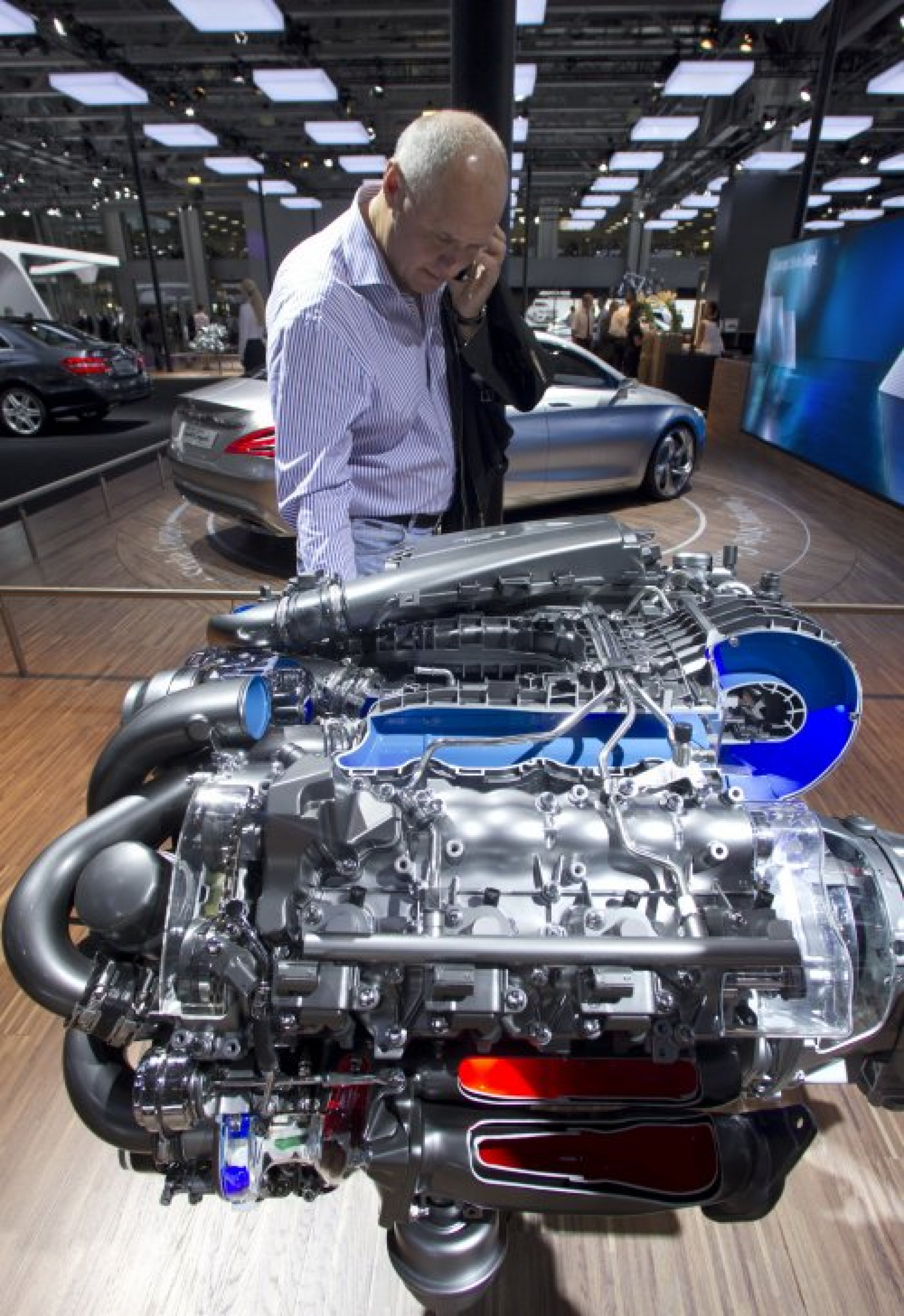 Mercedes offering a closer look at how one of its powerful engines works. Igor Tabakov 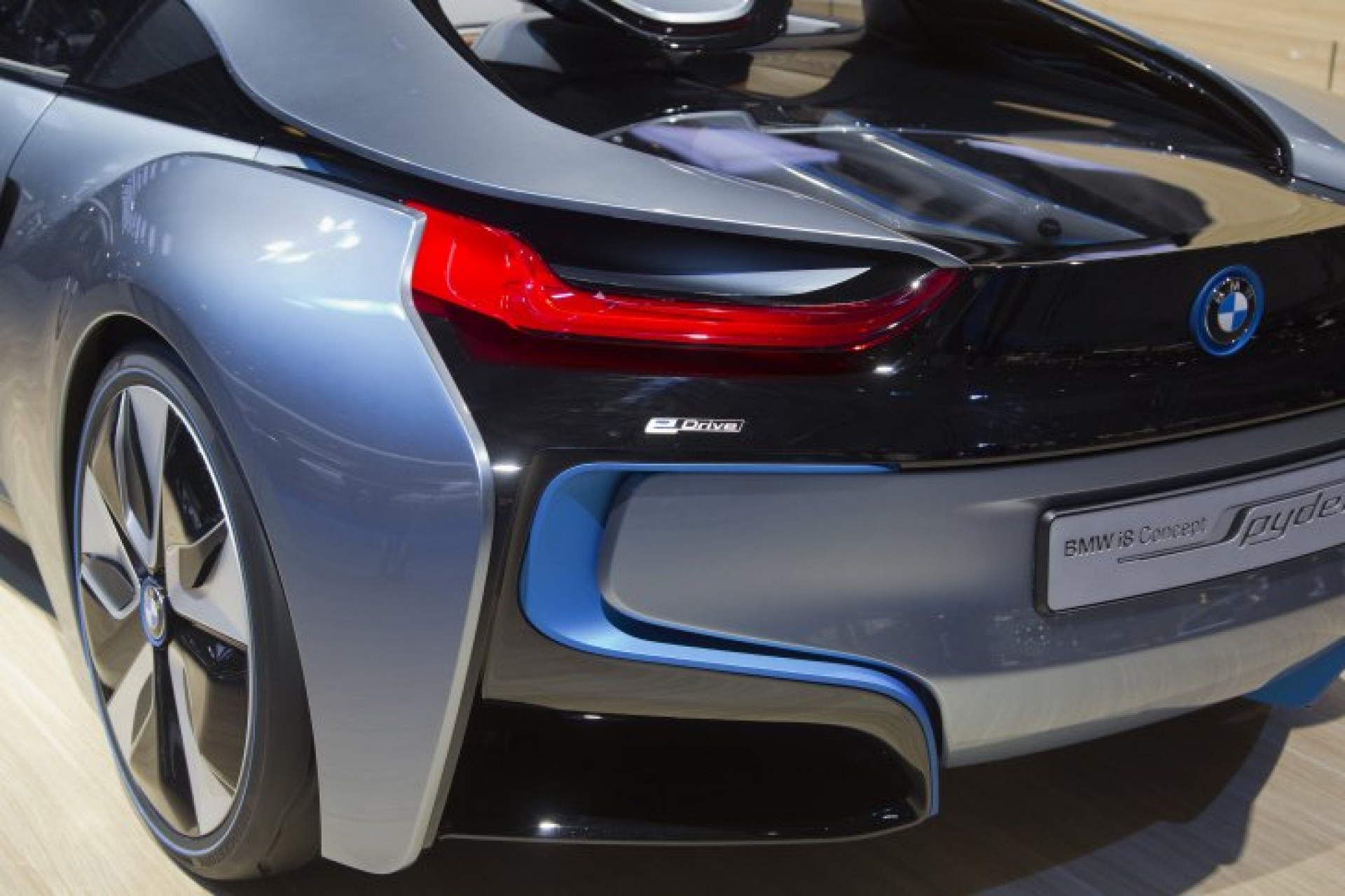 BMW's i8 Concept Spyder can accelerate from 0 to 100 kph in 5 seconds. Igor Tabakov 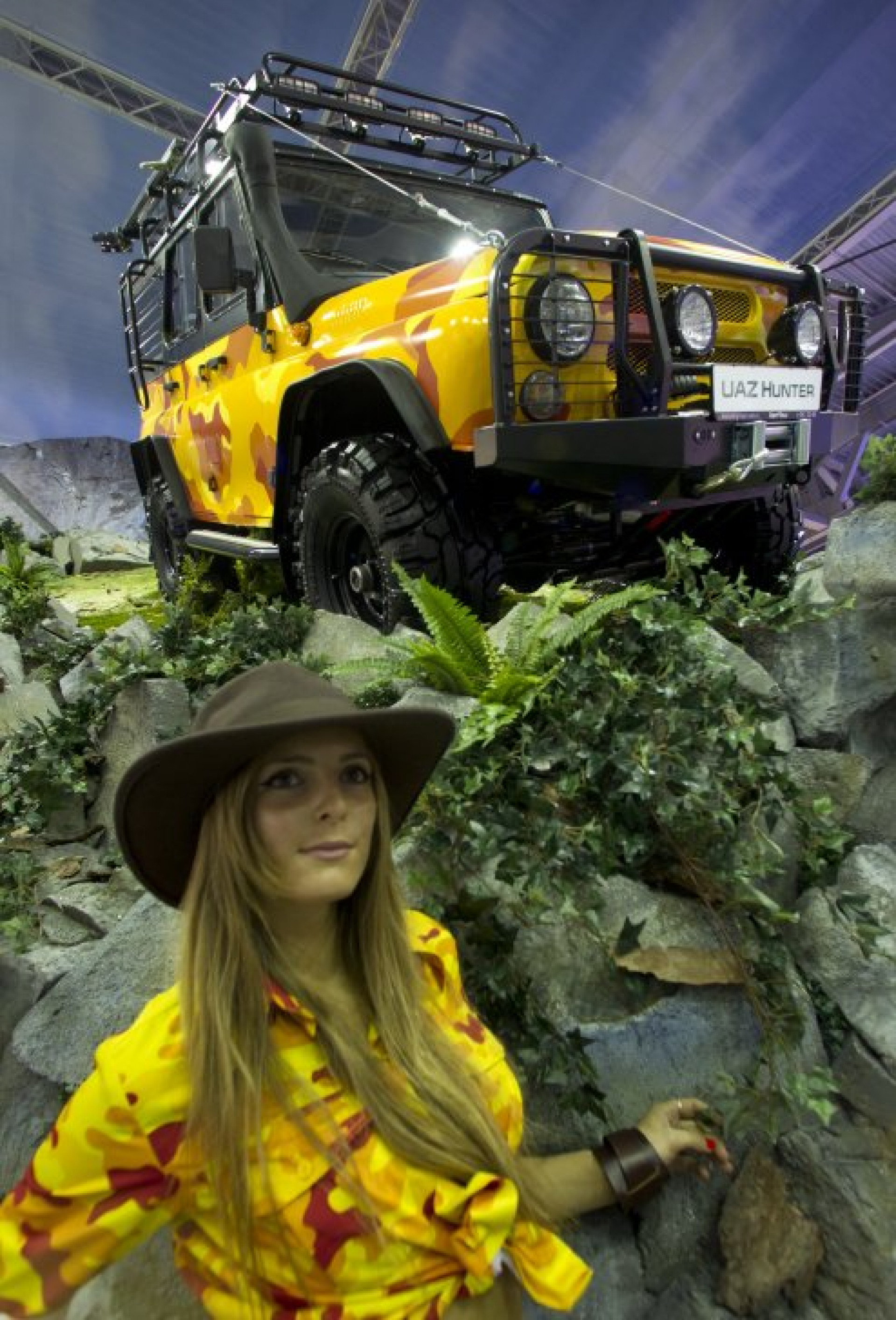 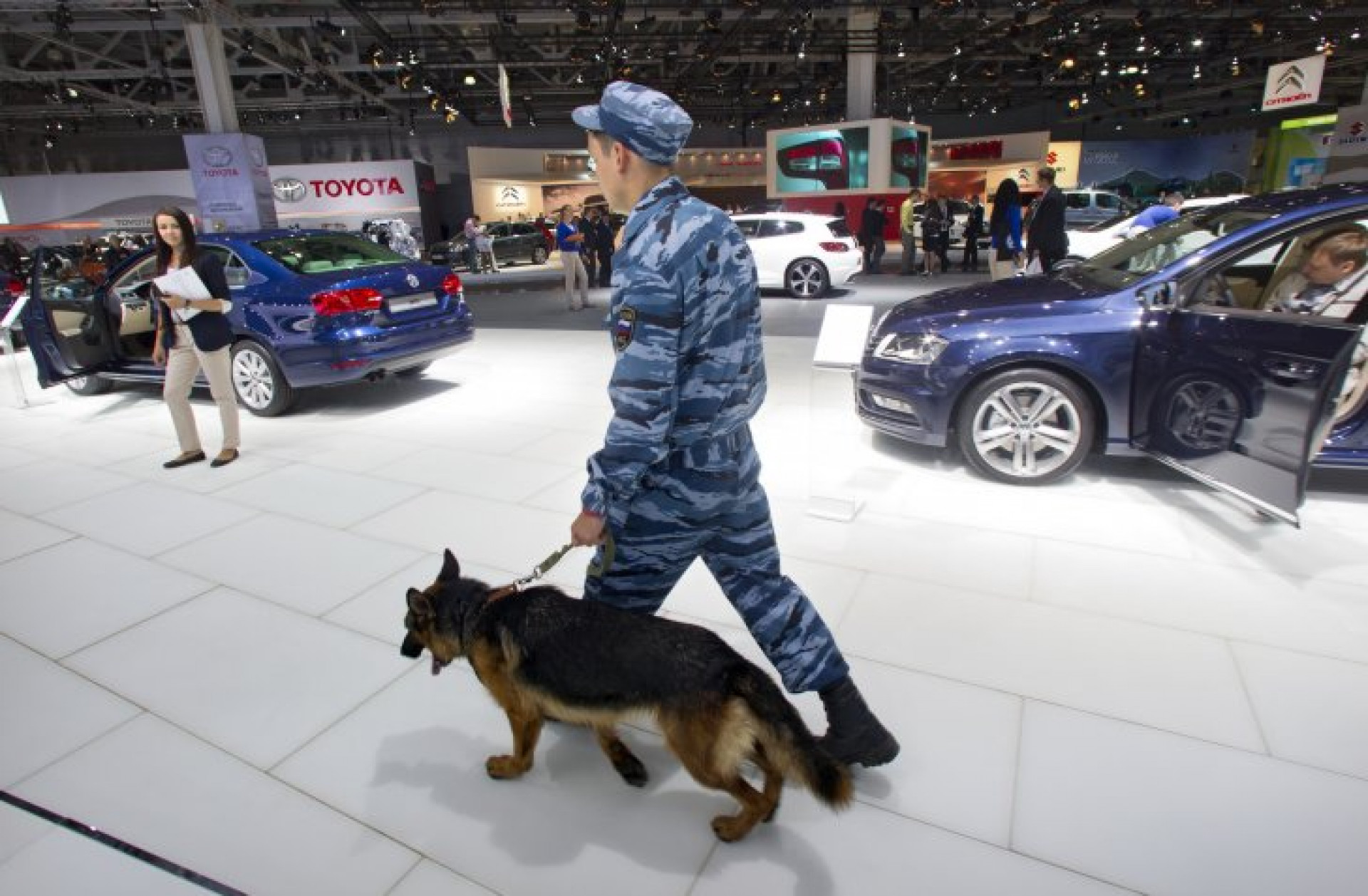 A police officer patrolling in the Toyota showroom with a bomb-sniffing dog. Igor Tabakov

KRASNOGORSK, Moscow Region — Strong and soft. Light and dark. Robust but elegant. The Lada of the future is a creature of carefully chosen contrasts, with a lovely line and lots of LED lights behind the dashboard to make it look like a space ship.

But unfortunately, it is not for sale. The Xray — the kind of SUV-crossover with a steeply inclined windshield ending in a smoother hood that has become de rigueur for the upwardly mobile middle class in Moscow in the past few years — is a concept car, created in just four months by Lada's new head of design, Steve Mattin, to showcase the new "design language" the brand will be adopting in coming years.

"The idea of contrast originally came when I moved to Russia," Mattin said in an interview Thursday during the opening day of the Moscow International Auto Salon, the country's largest biannual automotive industry trade show.

"The extremes in this country are everywhere: the extreme winters, six months of snow and temperatures of minus 30, and then you go to plus 25 in the course of a weekend; the contrast between my two places of work in Moscow and Togliatti; the vast contrast between the super rich and, let's say, the other 95 percent of the population," he said. "So the idea came about that it might be good to do something with differences."

The new brand image the Xray represents revolves around a big, X-shaped grill, with the iconic yacht logo of the Lada brand polished, bulked up and slapped right in the middle of the car's face.

The gloss-finished grill is outlined by chrome, so the X stands out even on dark vehicles and is framed by matte-finished body work. Mattin said the paint has a "soft-touch" finish, so the tactile sensation of closing a door compares with the tight, robust lines of the body.

"It's all about contrast," Mattin told reporters and car executives as he pointed out how the crisp cheekbonelike lines that define the architecture differ from sculpted bodywork and windows, which are meant to "flow" into the rear lights and then the read windshield.

The interior follows the same principle, with light and dark as the other overriding theme and backlighting around the door and the instrument panel that creates what Mattin called "ambience" – a euphemism for "looking like a spaceship."

He said we should begin to see new models sporting the X-shaped radiator grill being unveiled starting in 2015.

Mattin, a graduate of Britain's Coventry University car design faculty, worked at Mercedes and then Volvo before joining AvtoVAZ as director of design in October. His arrival marked the first time the auto giant has hired a foreigner as its chief designer.

The Xray is an articulation of his plans to completely redefine Lada's brand image, a task that is both daunting and, he says, replete with remarkable room for creativity.

While the company remains by far the most popular on the Russian market, selling more new cars than its rivals and benefiting from a close tie-up with Nissan and Renault, Lada is under pressure to modernize as foreign competitors pile into one of the world's fastest-growing auto markets.

Car sales in Russia grew 40 percent last year in volume terms to over 2.6 million vehicles, just below the peak reached before sales halved in the crisis year of 2009. Industry executives say sales could even break the coveted 3 million mark, which the precrisis market never reached, as early as this year.

"Globally, Russia was No. 7 in our internal market rankings in 2011, and we will probably climb to No. 5 five in 2012, right behind major markets like Germany, the United States, Brazil and China," Volkswagen Russia general director Marcus Ogesovitsch told the Moscow Times ahead of the show.

Volkswagen, which saw local sales of all its group brands, including Skoda and Audi, soar 75 percent last year and sales of its VW brand double, is expecting growth to continue at between 20 and 40 percent this year. Earlier this week, the company announced 1 billion euros ($1.3 billion) in new investments in Russia.

Organizers expect more than 1 million people to pack into the Crocus City Mall expo center when the biannual motor show opens its doors to the public Friday.

And the profusion of shiny metal on display, much of it gratuitously complemented by young women displaying a similar amount of exposed flesh, is testament to how determined carmakers are to seduce Russian buyers.

The event, which runs though Sept. 9, features 23 world premieres of new models, 21 debuts of new models in Europe and the presentation of 85 models never before seen in Russia. That's car models, not women.

Correction: Due to an editing error, in an earlier version of this article the surname of  Lada's head of design Steve Mattin was misspelled as Martin.