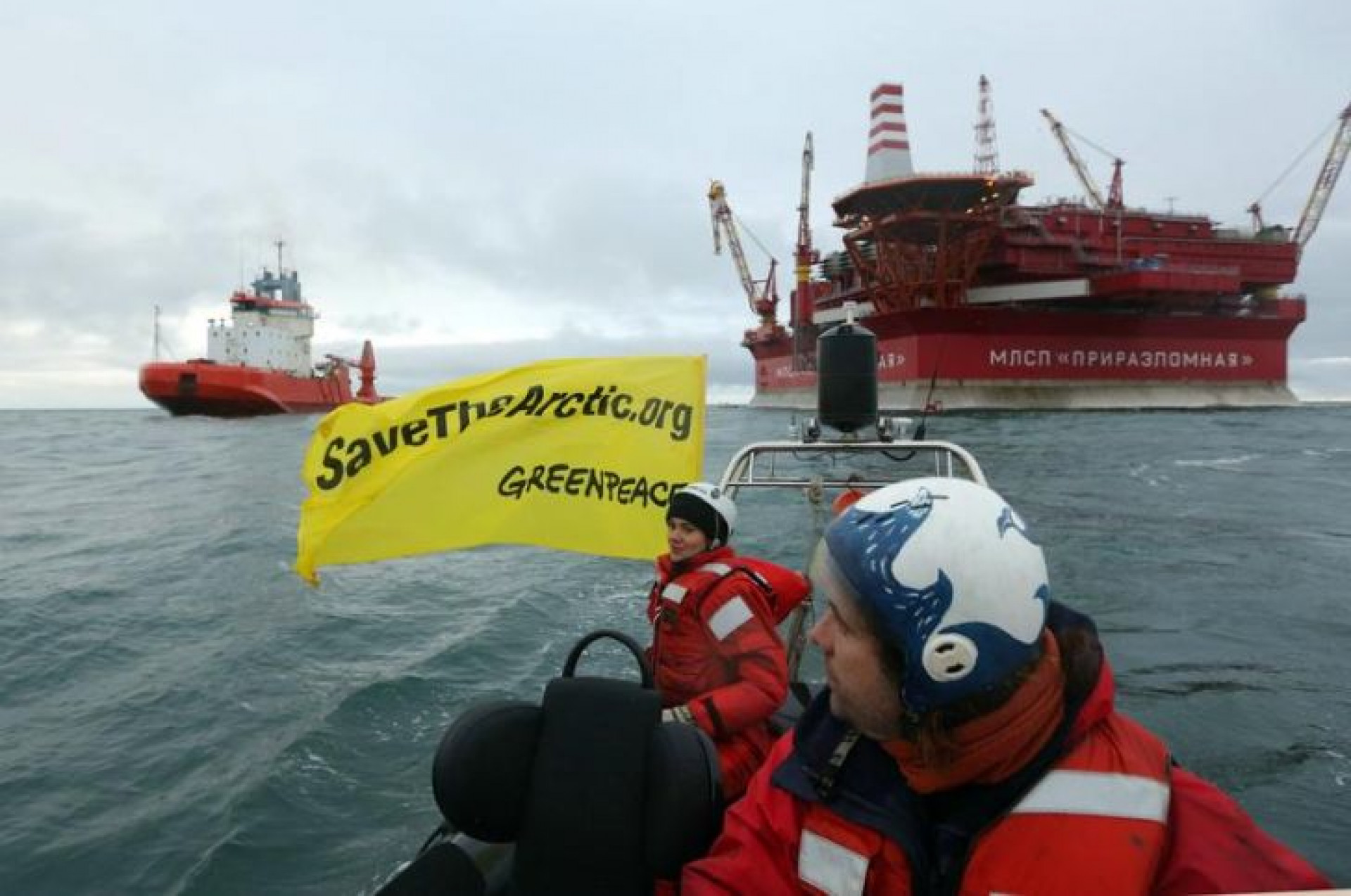 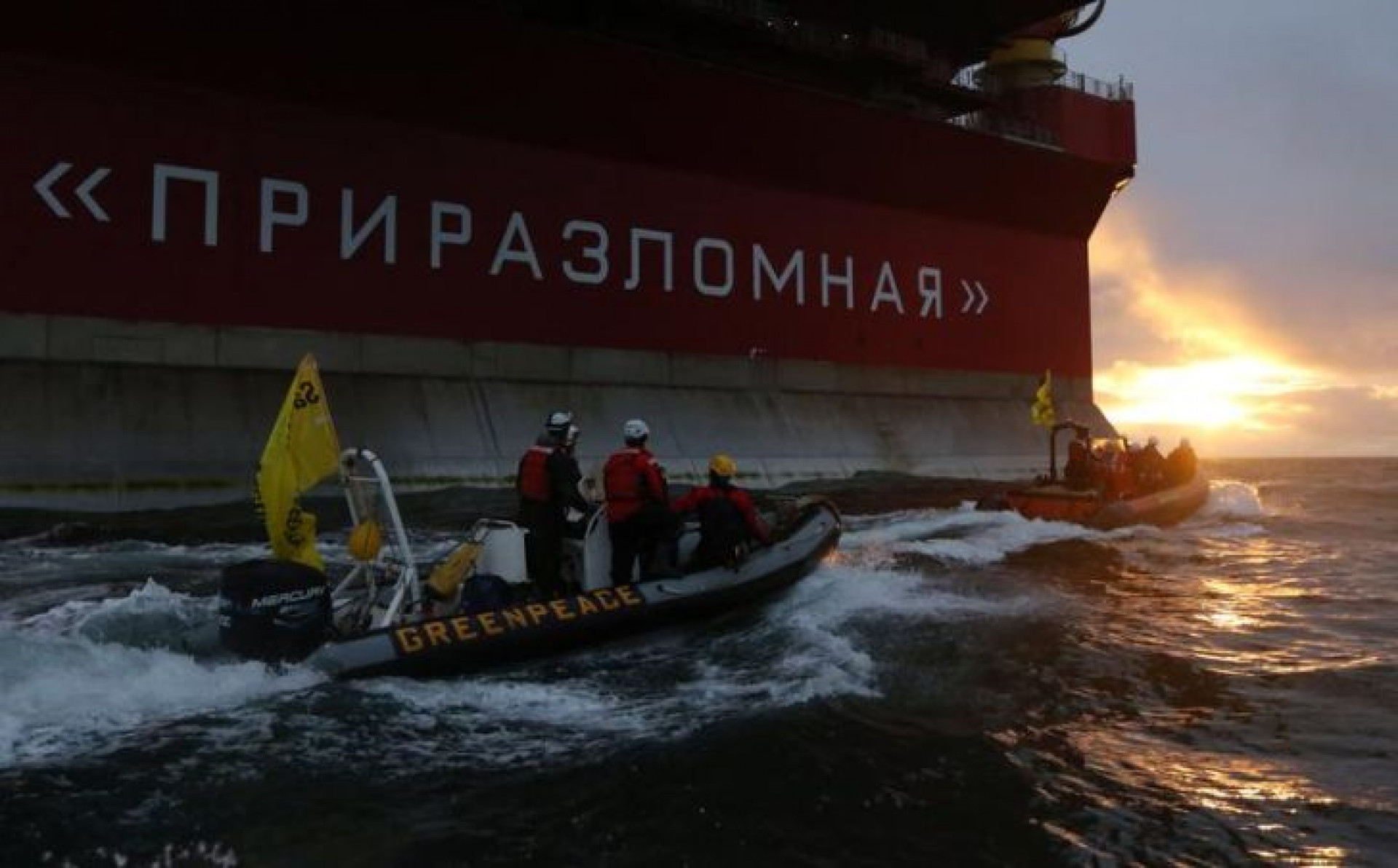 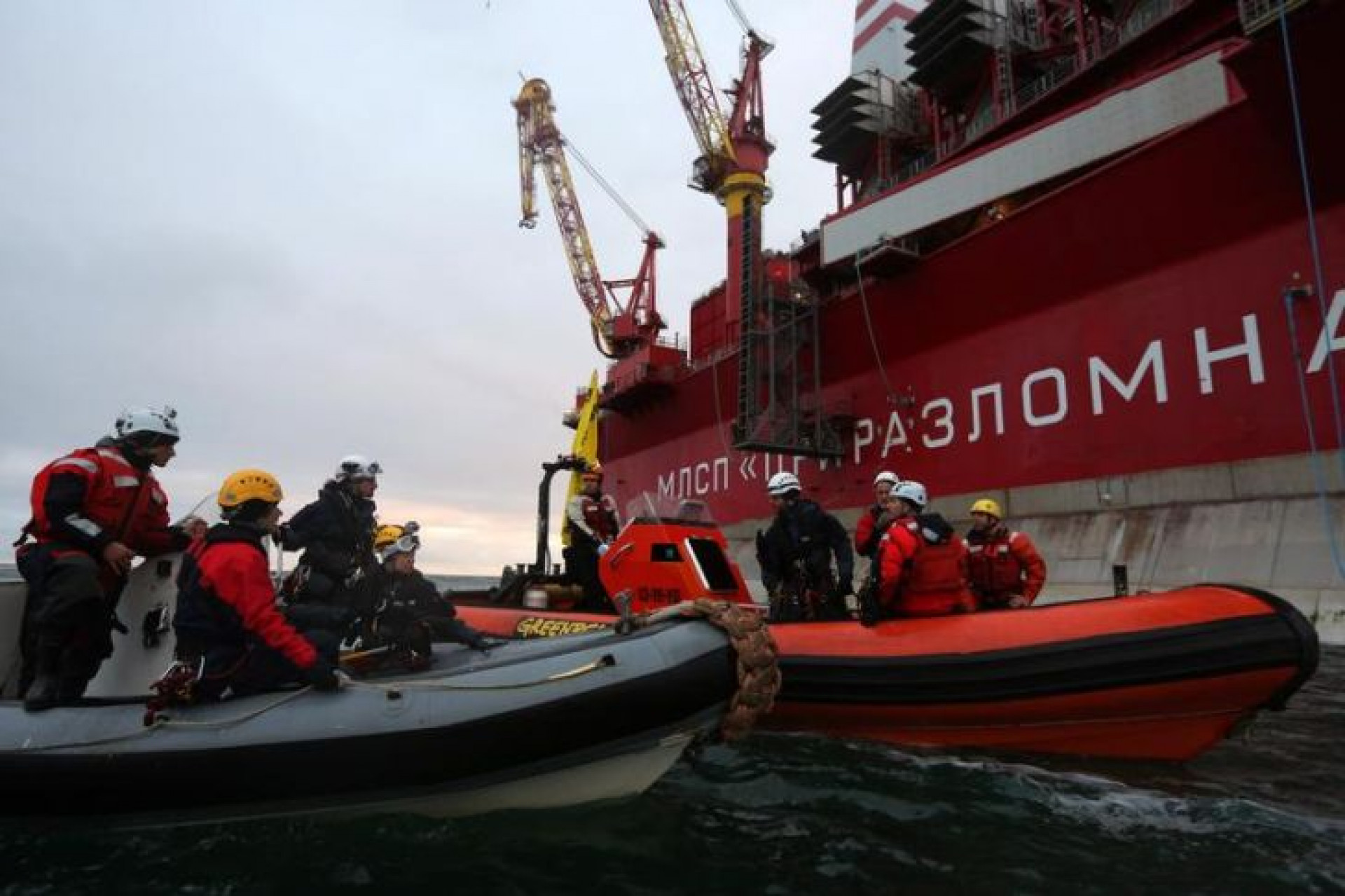 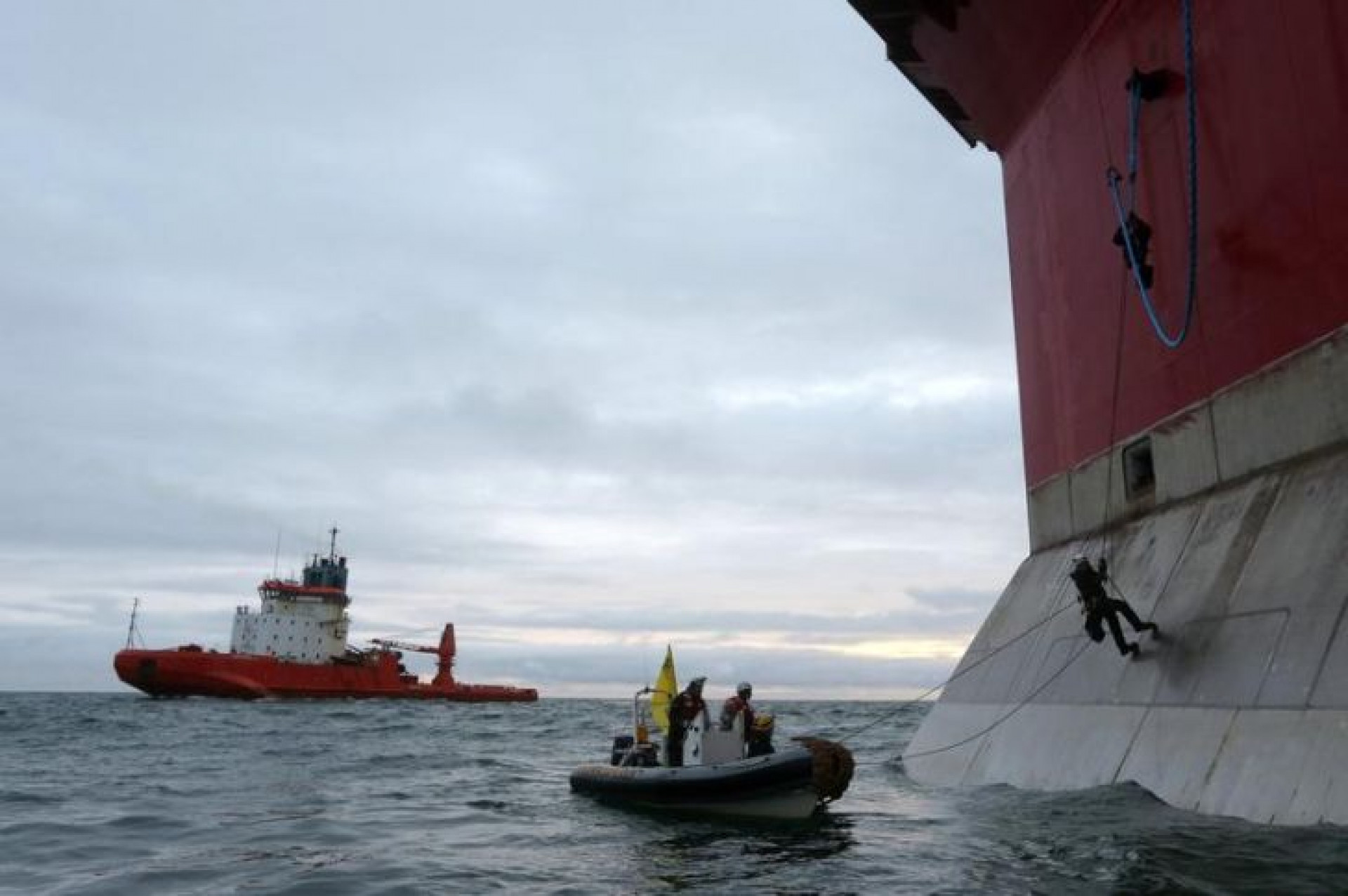 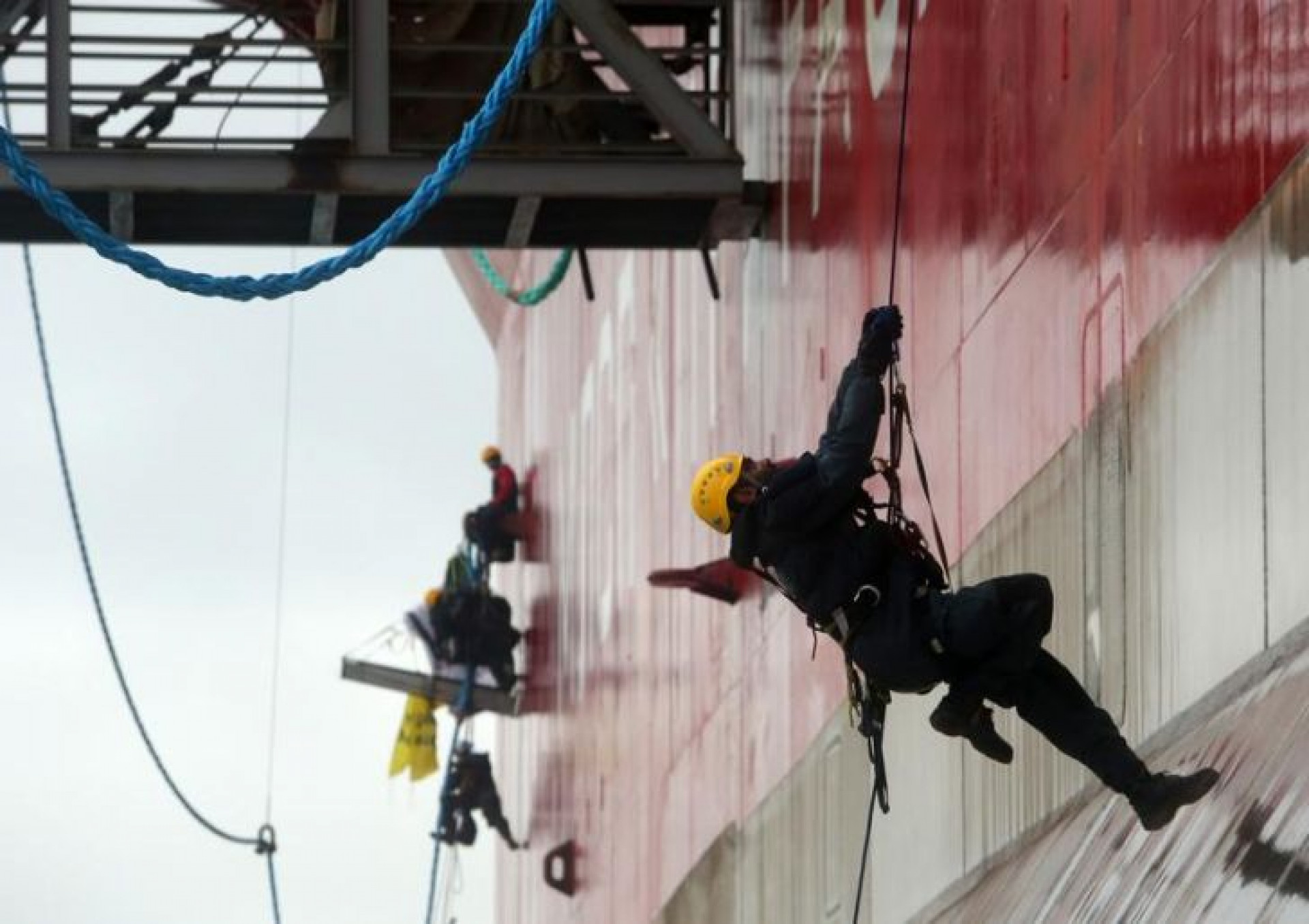 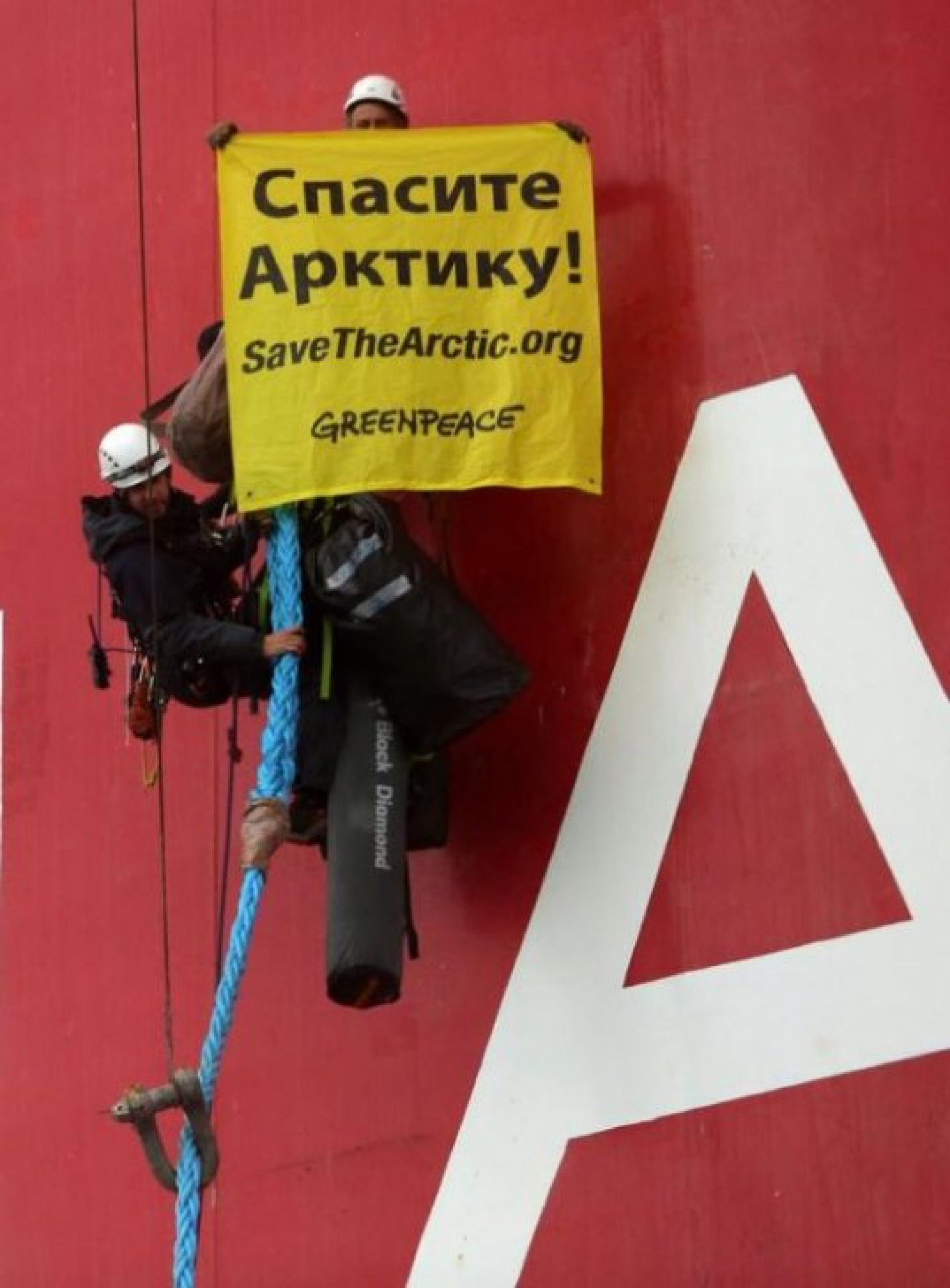 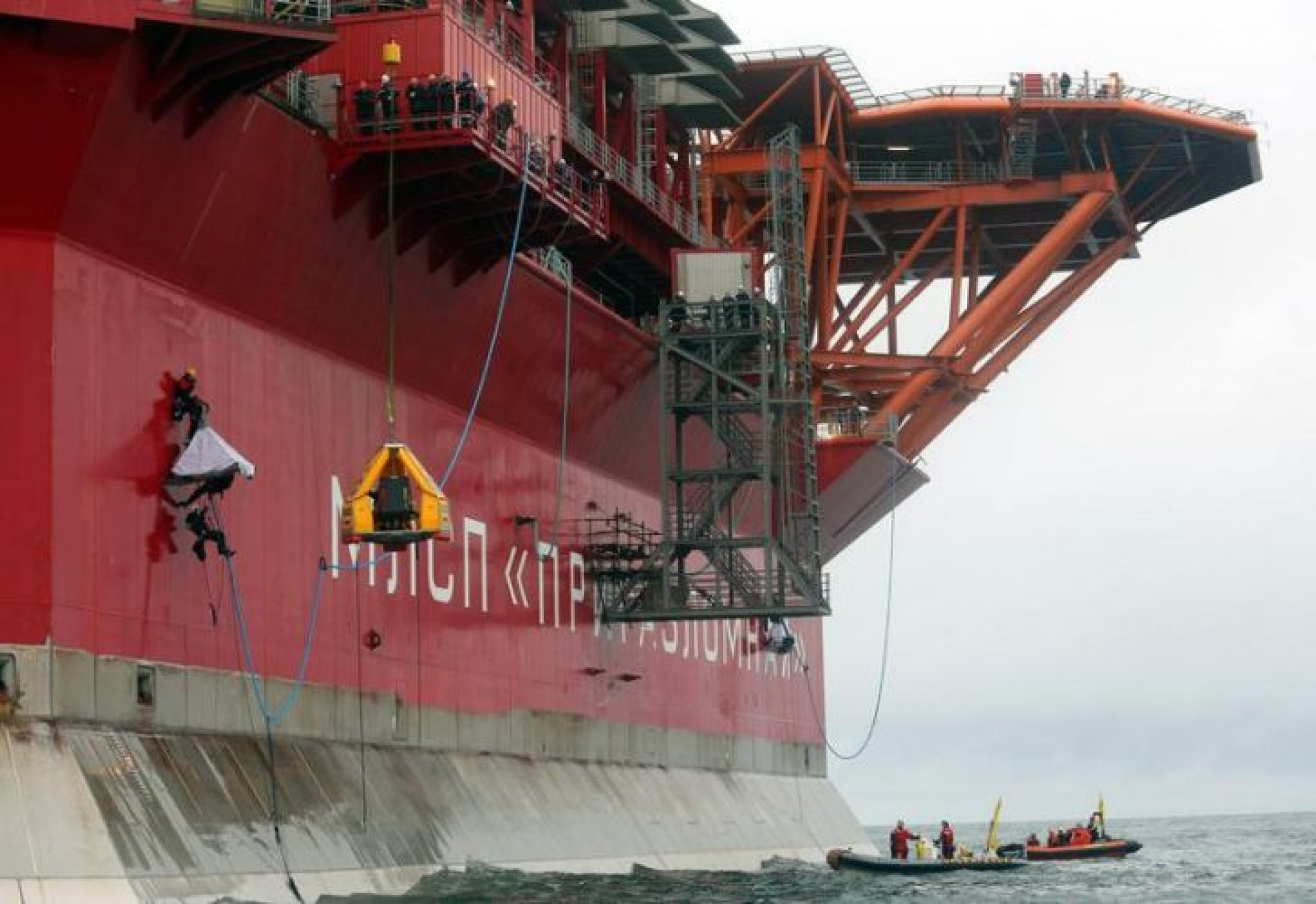 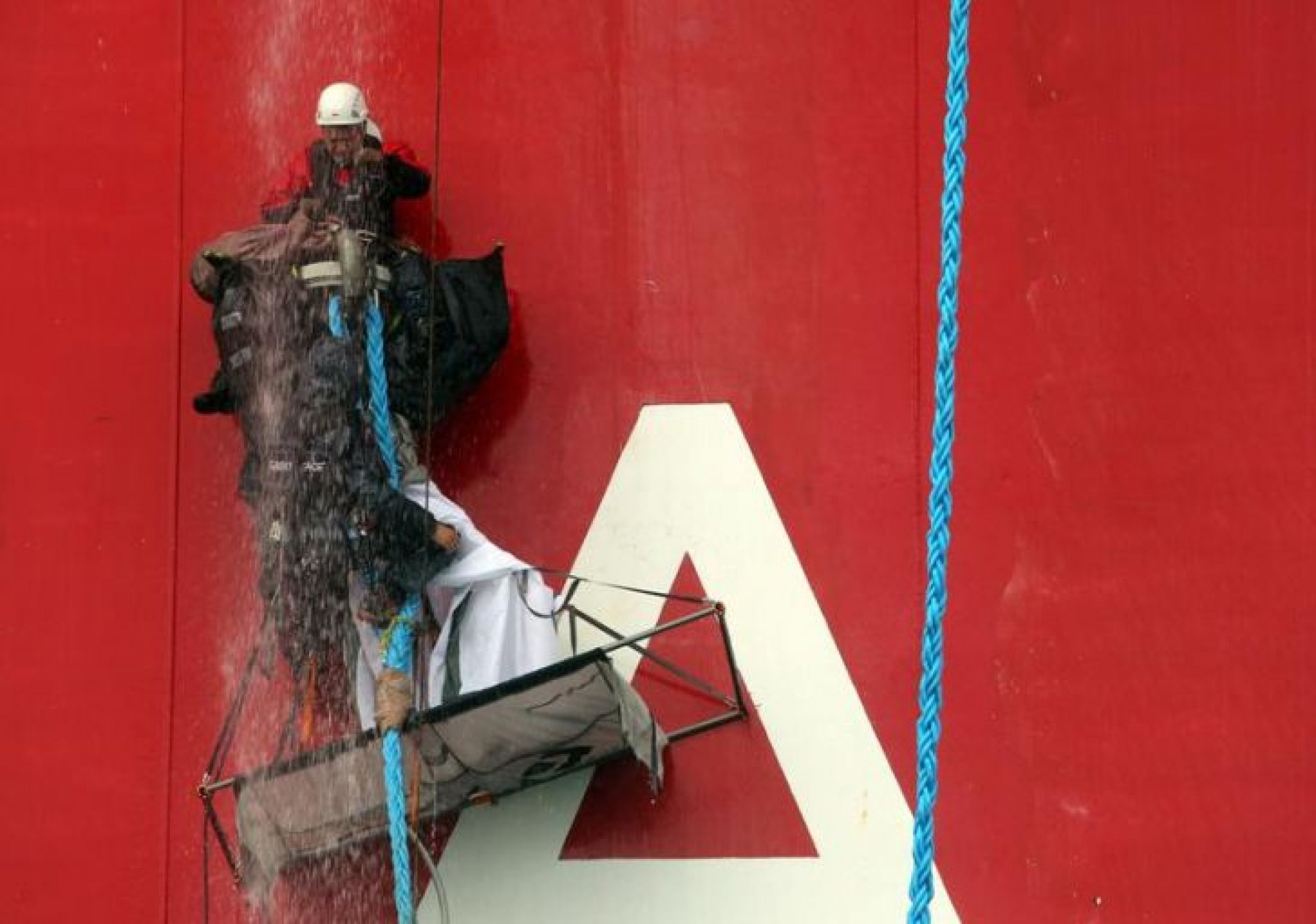 A team of Greenpeace International activists abandoned an occupation of Gazprom's Prirazlomnaya oil platform after complaining of being bombarded by ice-cold water and metal objects.

Six activists, including Greenpeace International executive director Kumi Naidoo, scaled the side of the giant platform in the Pechora Sea in a speedboat-born raid early Friday morning.

The group used a giant slingshot to pass a string, then rope over a foothold on the platform before using climbing equipment to ascend to a position halfway up the platform's side, a video of the action posted on YouTube showed.

The activists said they had brought enough food and clothes to last for “days,” but by 9 p.m. the activists decided to withdraw.

Greenpeace said Sunday that “multiple pieces of sharp, rusted jagged pieces of metal were thrown at the activists from above,” as well as a single “large heavy metal object” on a mooring rope that was directed at one of the groups of climbers. Greenpeace said it had recovered several of the metal fragments as evidence.

Speaking earlier on Friday morning by satellite phone from his position in a flimsy tent on the side of the rig, Naidoo said the platform’s crew had “mostly been friendly — they’ve been talking to us, asking why we are here and so on.”

But that later changed.  “Intercepted radio from platform: Strict orders to leave us alone 'til tomorrow, but make life as uncomfortable as possible, i.e. lots of water,” Naidoo tweeted from his position next to the platform.

Gazprom Neft Shelf, which operates the platform, insisted that the Greenpeace action had not halted work on the platform, which is still undergoing preparations to begin drilling.

“Today representatives of Greenpeace violated the 500-meter navigational safety zone of the Prirazlomnaya sea platform and with the help of climbing equipment hung from its side. They were invited to come onto the platform for constructive dialogue, but they refused, saying they would ‘hang onto the platform,'" a Gazprom Neft Shelf spokeswoman said in e-mailed comments.

Greenpeace denied ever having received such an invitation.

“Later in the day, after the waterbombing, when some of our activists were experiencing symptoms of hyperthermia, they said we could come up and they would be detained overnight until the authorities arrived. However, the workers on the platform have no authority to detain our activists, and given the situation, with the intense waterbombing and metal shrapnel being thrown at them from the deck above, our activists did not feel safe going on the platform without the Coast Guard or other authorities present,” Naidoo said by telephone from the Arctic Sunrise on Sunday night.

The company would not comment on the activists' claims of having been bombarded by metal objects and fire hoses.

The Arctic Sunrise, the vessel from which the raid was launched, remained in the vicinity of the rig and was “monitoring what Gazprom is doing” as of Sunday night, Greenpeace said. The organization would not comment on future plans other than to say that its fight to save the Arctic would continue.

Prirazlomnaya is the world's first ice-resistant oil platform, and will make Gazprom the first-ever company to commercially produce oil from offshore Arctic fields when it goes online next year.

Gazprom says Prirazlomnoye, one of several shallow-water fields in the Pechora Sea, holds 72 million tons of oil reserves. The platform, which was towed into position last year but has yet to begin drilling, is expected to produce over 6 million tons a year when fully operational.

The project is believed to have cost over $1 billion, but has already been plagued by delays, and missed a deadline to begin drilling this summer. Gazprom Neft Shelf earlier this month declined to comment on the current timetable for beginning work, saying only that preparatory work is under way.

Environmental groups have repeatedly criticized Gazprom for failing to publish their full oil spill response plan for the platform, saying that no technology yet exists to clean up oil spills in icy conditions and that even a small accident could be catastrophic for the Arctic ecosystem.

Earlier this month Naidoo visited Moscow to present joint research commissioned by Greenpeace and the World Wildlife Fund suggesting that in the event of a spill, oil could spread 300 kilometers from the platform in five days. With most of the emergency response vessels based 1,000 kilometers and three days sailing away in Murmansk, the activists argue that would be catastrophic.

Last week an Arctic Indigenous Peoples’ conference hosted by the Save the Pechora Committee, Komi ethnic organization Izvatas, and Greenpeace in Usinsk signed a motion calling for a halt to offshore oil development in the region.

Greenpeace also published a letter from the Emergency Situations Ministry that it said proved that Gazprom’s oil spill response plan for the rig, which by law must be renewed every five years, had expired.

"Like Shell's reckless plans to drill in Alaska, it's not a question of if an oil spill will happen, but when. The only way to prevent a catastrophic oil spill from happening in this unique environment is to permanently ban all drilling now," Naidoo said Friday.

Gazprom Neft Shelf has rejected claims that the platform is a threat to the environment, saying the platform's performance last winter proved its reliability and that professional emergency response crews are on duty 24 hours a day.

The company did not respond to questions about whether it planned legal action against the campaigners.  But an “unofficial” source told Kommersant that the company was at something of a loss. “There is no precedent for this,” the source said, adding that the firm was taking legal advice.

This is the first time Greenpeace has done a comparable action in the Russian Arctic since landing a team to monitor radiation levels on Novaya Zemlya in 1990. All the activists were arrested and deported.

In 1992, a Russian coast guard vessel fired warning shots across the stern of a Greenpeace vessel trying to check radiation at the site of a sunken nuclear submarine in the Arctic Ocean. The vessel was boarded by the coast guards and escorted from the area.

“That was 20 years ago, and times have changed. This is one of very few places where I have absolutely no idea how they are going to react,” said Greenpeace action coordinator Al Baker, in the run-up to the occupation.

Speaking on condition of embargo exclusively to The Moscow Times in the days prior to the occupation, key activists described how they had been plotting an action against the Prirazlomnaya rig “at least since last autumn.”

“It came up when we were planning our activities for the coming year in October,” said Yevgenia Belyakova, director of Greenpeace Russia’s Arctic Program in an interview earlier this month.

“I came over to Moscow in March and they showed me a picture of the rig and said ‘Can we do something here?’ And I said ‘Yes',” said Baker, the mastermind behind the operation.

Baker and Belyakova were both speaking aboard the Arctic Sunrise, the Greenpeace vessel that first approached the Prirazlomnaya oil platform earlier in August on a voyage that was pitched to journalists as “bearing witness” of oil development in the region.

During the course of the week-long voyage from Murmansk, however, it became increasingly apparent that the real purpose was a reconnaissance mission for a direct action.

The crew and activists agreed to discuss their plans on condition that any information would be embargoed until the action began.

The Prirazlomnaya platform is outside the country's territorial waters, but for legal purposes it is considered Russian territory.

The plan was a publicity stunt rather than a serious effort to shut the rig down — the activists said they expected to be removed and did not intend to damage any equipment to halt the platform’s work.

Direct action is what Greenpeace is all about; its high-profile stunts are what keep the organization in the headlines and bring in donations.

Unlike elsewhere, however, Belyakova said the group's work in Russia focuses on influencing decisionmakers rather than public opinion, largely because environmental issues tend to be relatively low on many Russians' list of priorities.

But it is a risky business. Baker has been arrested in Japan, detained by the French Foreign Legion in the Pacific, and once spent days evading arrest on an Alaskan island during an anti-logging campaign.

“No Russian citizens will take part in the occupation; they were keen, but I said that if there is one Russian guy and the foreigners all get deported, there will be one Russian who could be the focus of any retribution,”he said.

For that reason, Belyakova and other activists remained aboard the Arctic Sunrise, while the six-man team took off on inflatable speedboats into the three-mile exclusion zone to actually climb the platform.

In an effort to minimize the potential for prosecution, Baker said all the climbers — two Germans, an American, a Finn and a Canadian, as well as Naidoo, who is from South Africa — would all have valid Russian visas.

In the “best case” scenario, the authorities will take the stunt with good humor, remove the activists from their positions on the rig and ask the Arctic Sunrise to take them away.

But as they trained for the operation earlier this month, the crewmembers of the Arctic Sunrise were bracing themselves for the worst-case scenario of being boarded by the Russian Navy, escorted to Murmansk and arrested.

“It depends on how Gazprom wants to play it. If Gazprom wants to make an epic world-class media show out of this then yeah, I suppose they’ll arrest people [and use] jail and courts and things like that. If they don’t, then they’ll just get hold of them all and say ‘Please can you take them back to the ship,‘” Baker said.

Arctic ice is believed to have reached its lowest level in recorded history this summer, according to data from the U.S.-based National Snow and Ice Data Center.