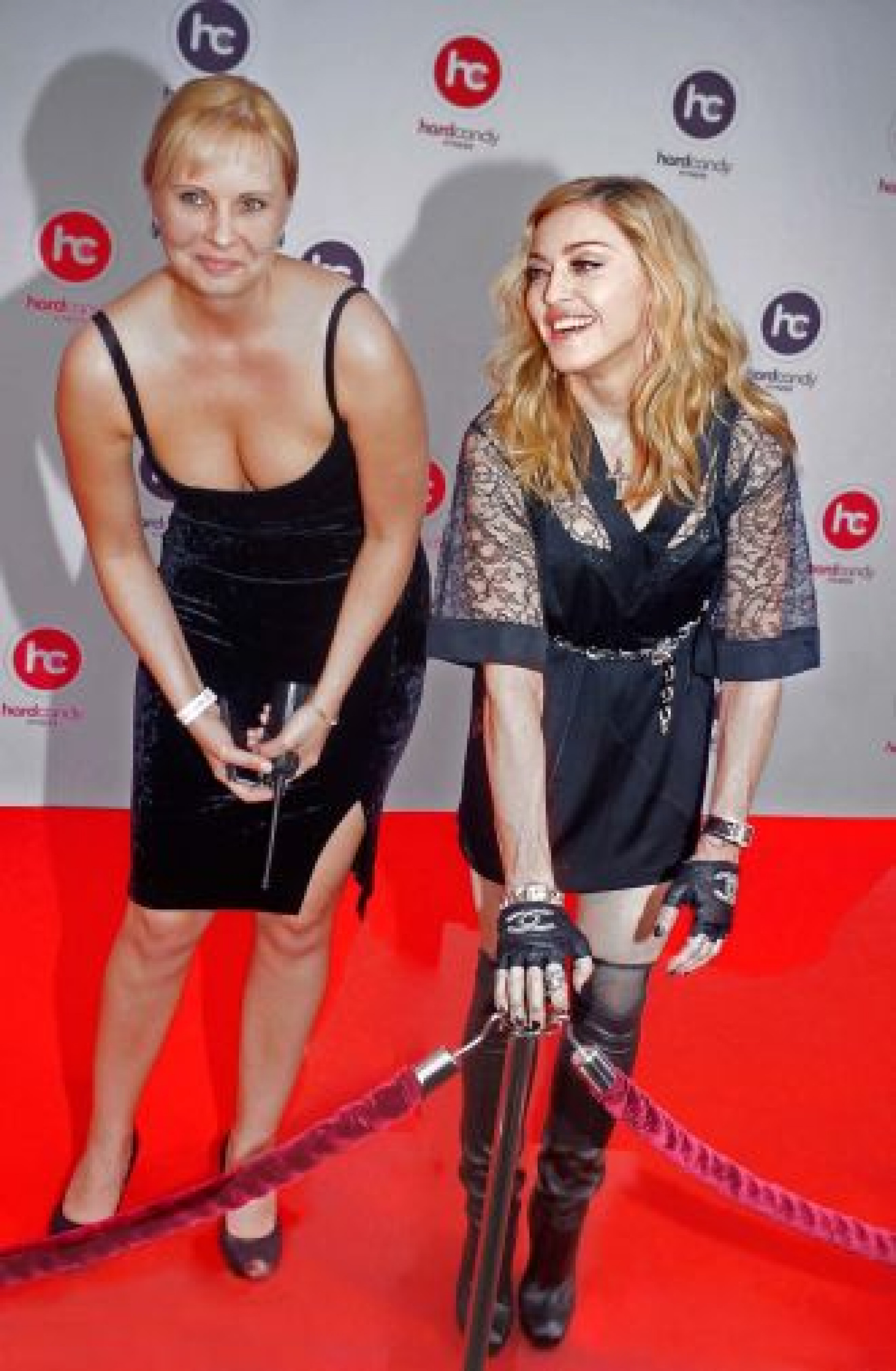 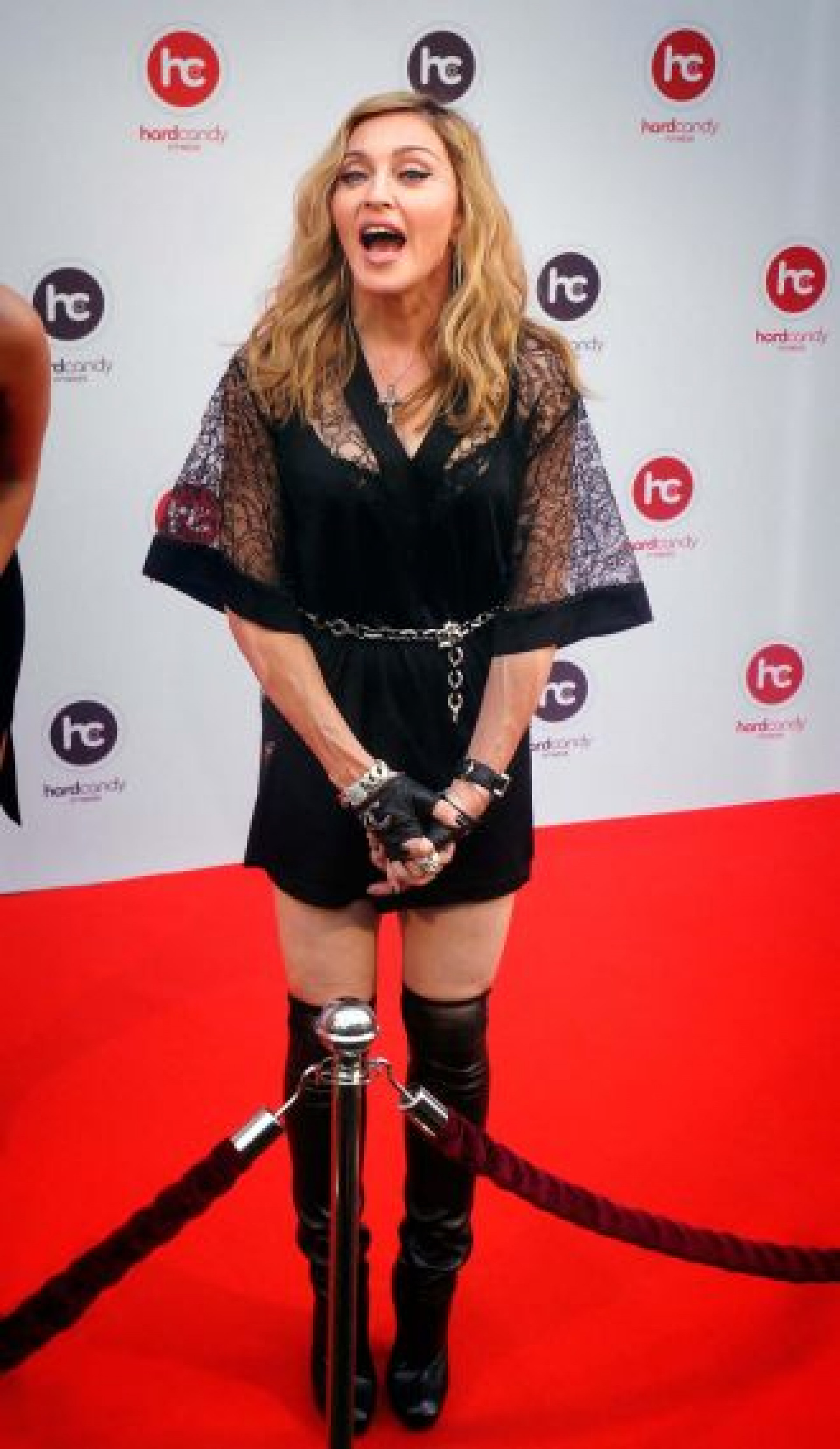 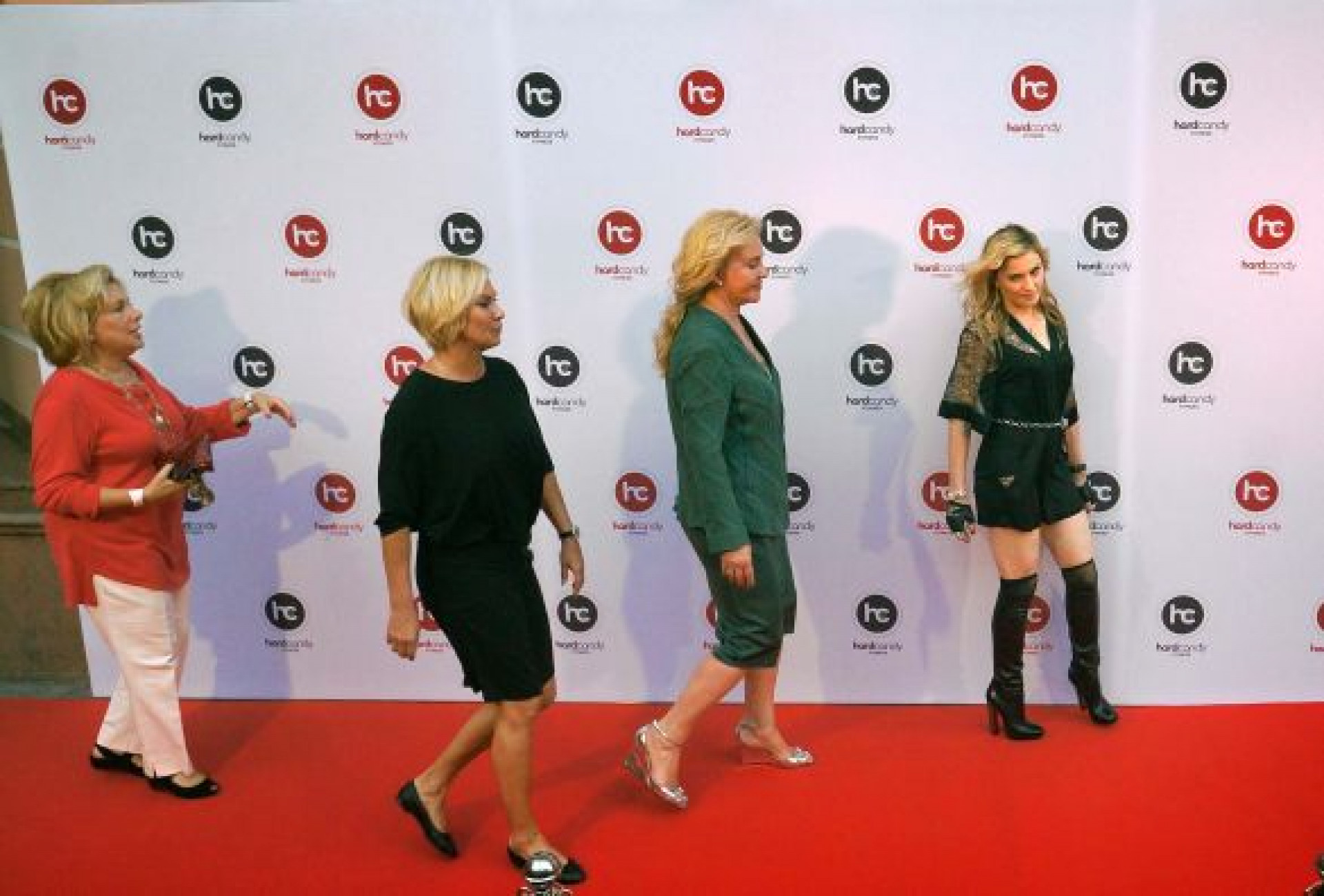 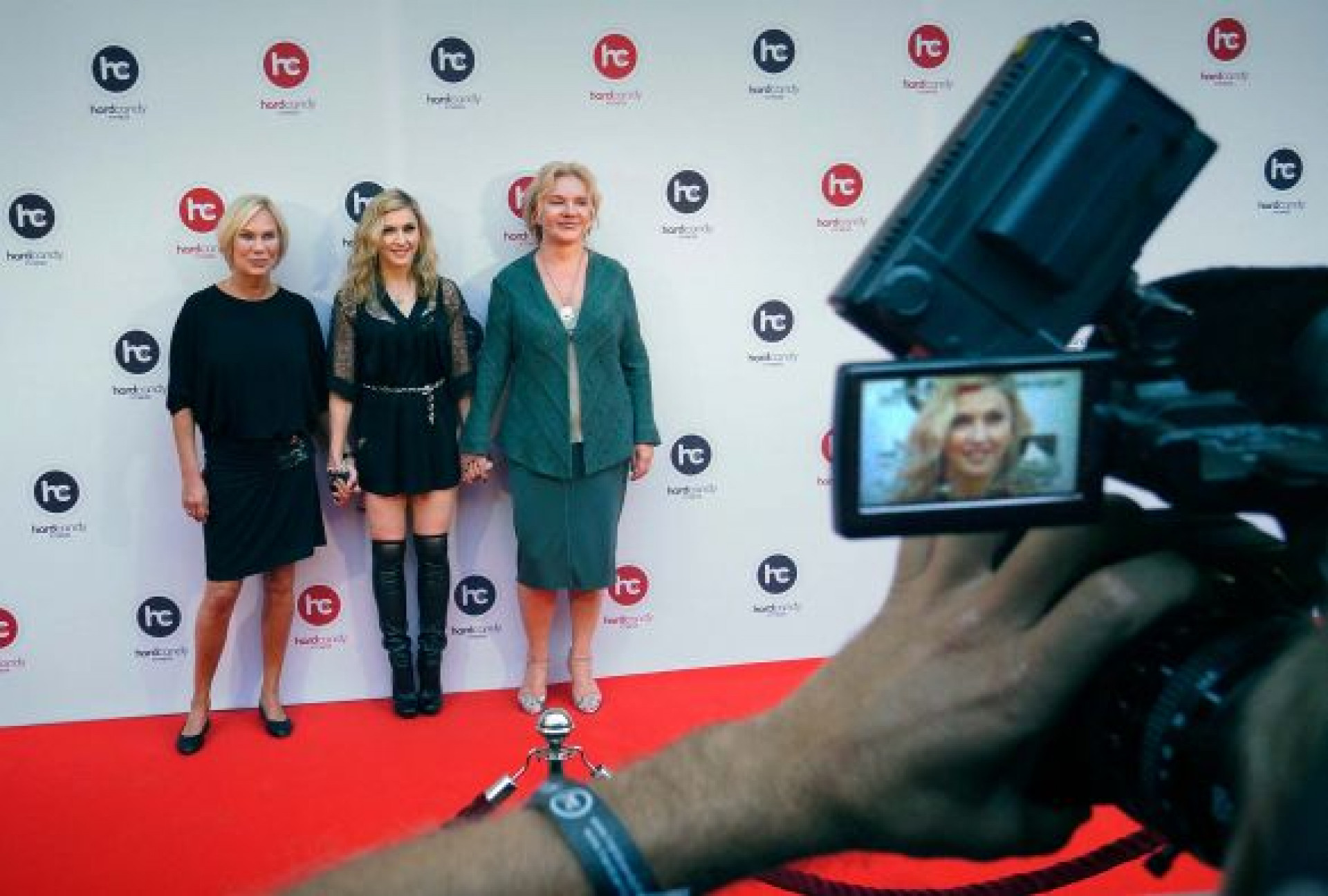 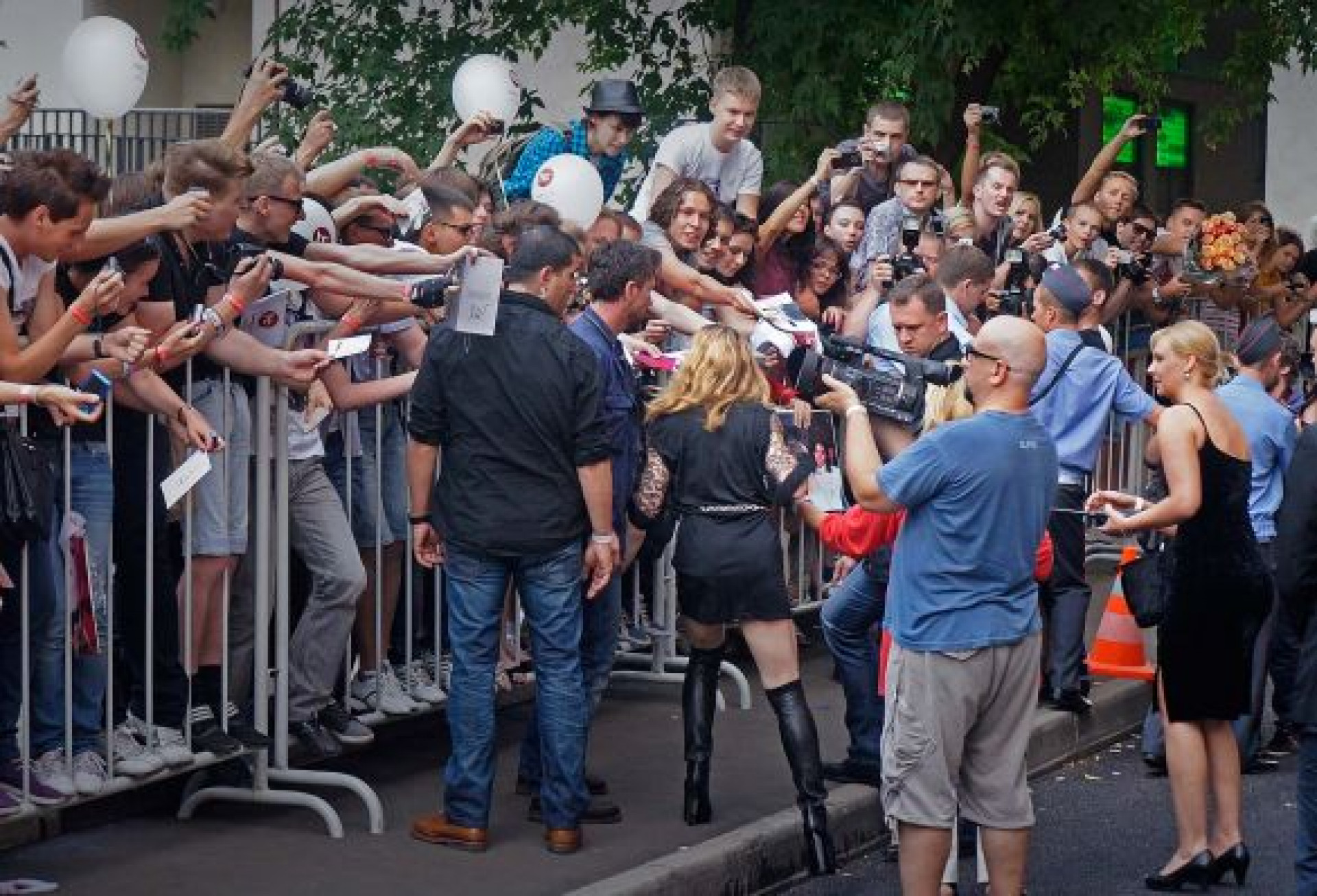 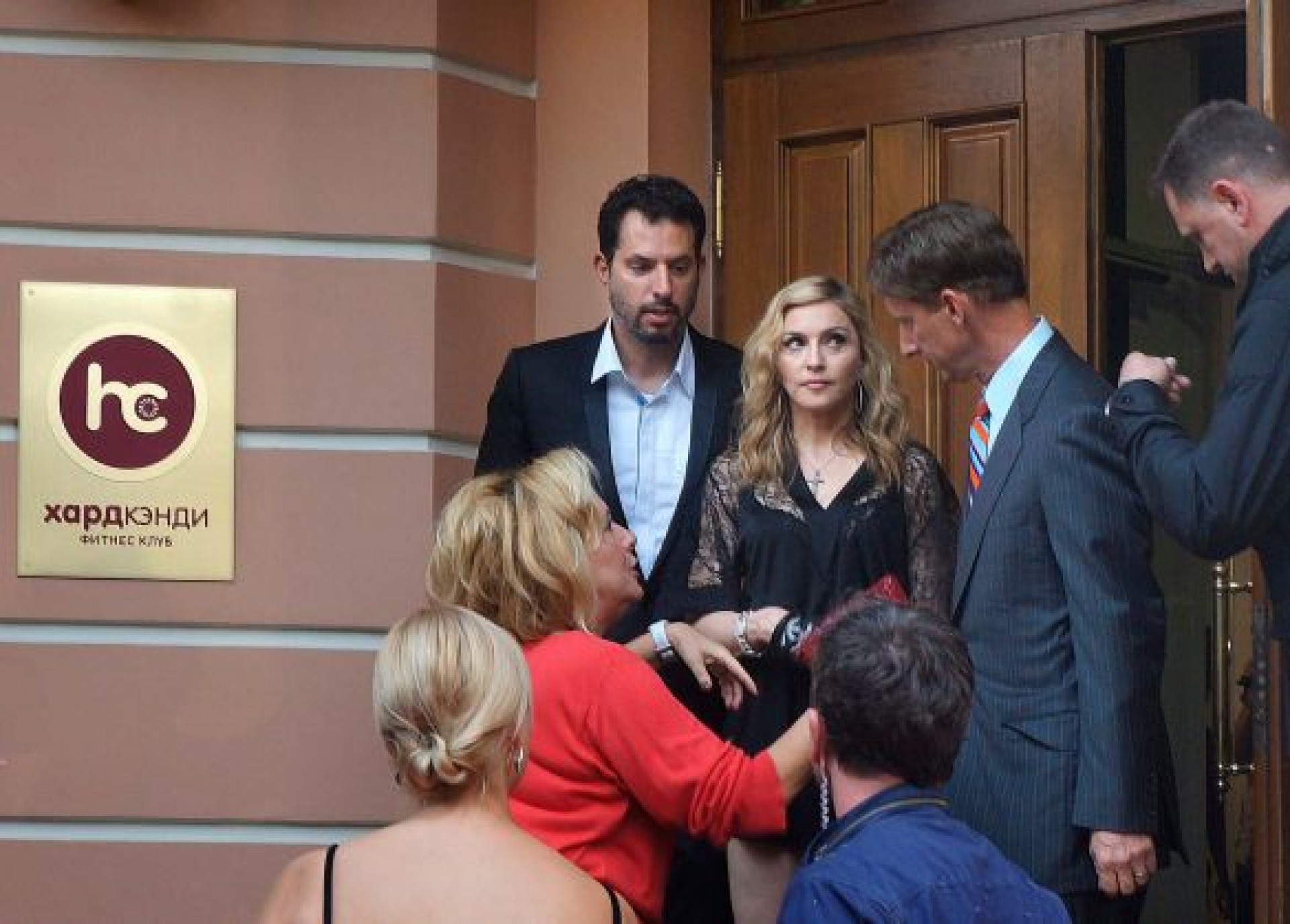 Editor's note: For more on Madonna's visit to Moscow, take a look at this photo gallery.

About a hundred admirers greeted Madonna as she opened a branch of her branded gym in downtown Moscow, riding the wave of the country's more than half a billion dollar fitness business.

The pop diva's appearance at the club late on Monday, at the start of a visit to Russia that will have her appearing at the Olimpiisky Sports Complex Tuesday evening to promote her new MDNA album, was met by an outpouring of emotion.

One happy fan, a balding man in dark-rimmed glasses, started screaming when Madonna signed his arm with a black marker, and he didn't stop until a police officer walked over and warned him to contain himself.

The Hard Candy club, which will offer Madonna's specifically designed work-outs, was opened in the premises of Planet Fitness gym on Bolshoi Kislovkski Pereulok in partnership with Irina Razumova, president of the fitness club chain, which owns 48 facilities in Russia, Ukraine and Sweden.

Another Hard Candy club will be opened in St. Petersburg, the city Madonna is planning to visit after Moscow.

She told reporters that clients would be able to select 80 work-out programs in the club, including ones specially prepared by Madonna.

Club managers said that they already have a long waiting list of clients since the 3,000 square meters facility started to function in January.

There are about 2,500 gym facilities across the country, with 550 of them located in Moscow. The overall fitness industry turnover is estimated at $548 million annually.

Despite the fact that the Soviet Union was considered to be one of the leading sport powers, a Western-style fitness industry was almost nonexistent 20 years ago.

American entrepreneur Bernard Sucher, who opened Moscow Beach Club — one of the first gyms in Russia — in 1995, recalled that there were two non-hotel based fitness clubs in the 1990s: one charging $3,000 and the other $2,800 per annual membership. Both had year-long waiting lists.

"The only choice I had was to build one of my own," Sucher said.

His club was bought in 1997 by Razumova's Planet Fitness.

The main challenges Sucher faced in setting up were finding a facility that could be renovated into a gym and good partners. Sucher said that he wasn't trying to get rich by building a fitness club, but his project was still financially successful. Over 100 people, most of them expats, signed up before the gym even opened.

"Other than a couple of expat fitness nuts, you'd never see anybody there before eight in the morning. Russians only came after 10, and they looked like security guards — angry looking young men," Sucher said.

"It's amazing to me how in less than a decade the face of fitness in Russia switched from mafia soldiers to office workers," he added.

The fitness industry is growing by 20 percent each year, Dmitry Kalashnikov, the president of the Association of Fitness Professionals, told Rossiiskaya Gazeta.

Analysts said that there is stable demand for premium-level fitness clubs in the capital. Around 40 percent of the brands are developing in the business class segment, where the target audience is professionals 21 to 35 years old who are willing to pay up to 50,000 rubles ($1,500) for an annual gym membership.

Although the fitness industry in Russia is booming, there is still a lot of room for growth, experts said. Only 2 percent of Russians visit fitness centers, compared to 14.1 percent of the population in the United States and 6 percent in Britain.