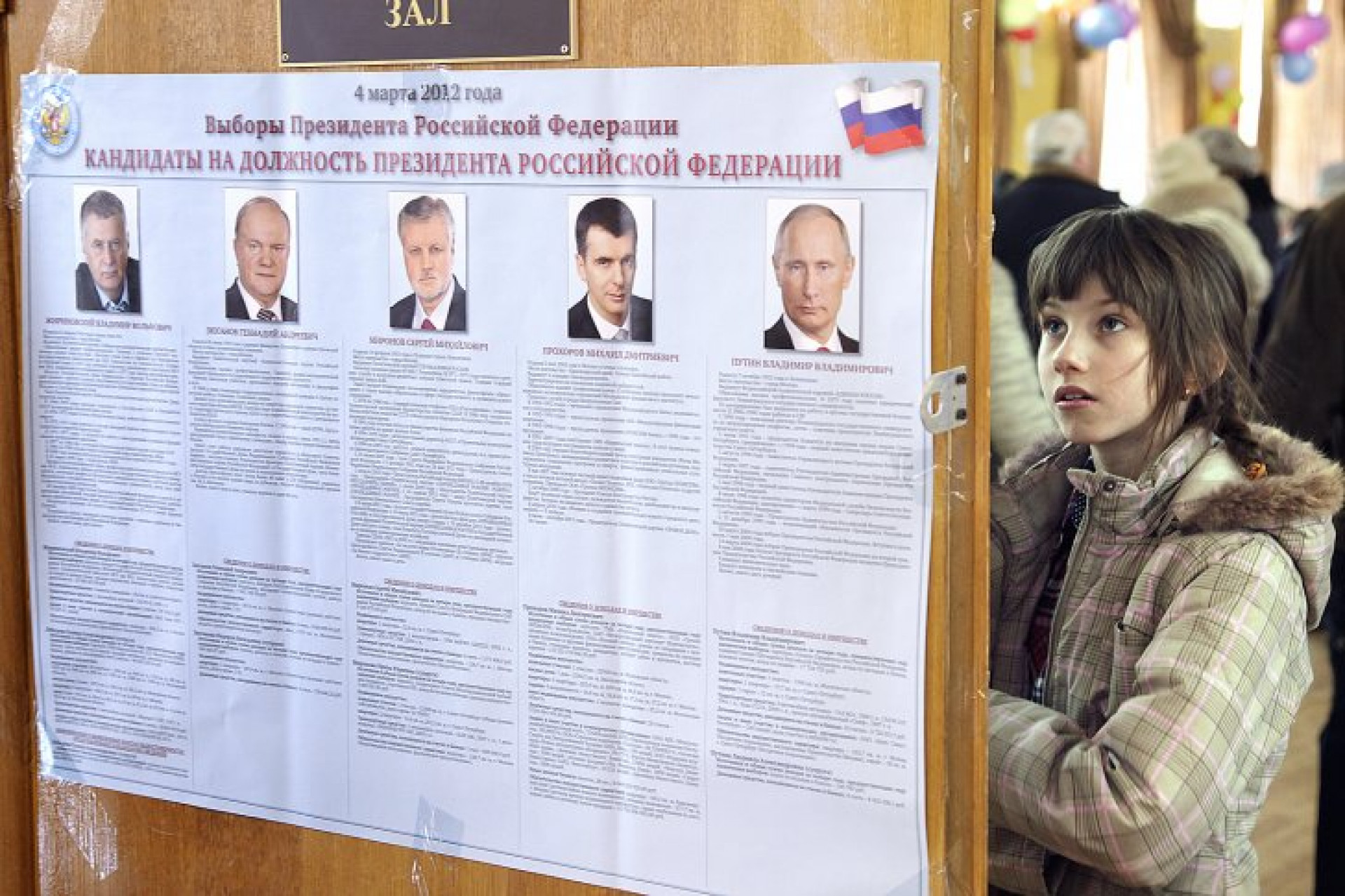 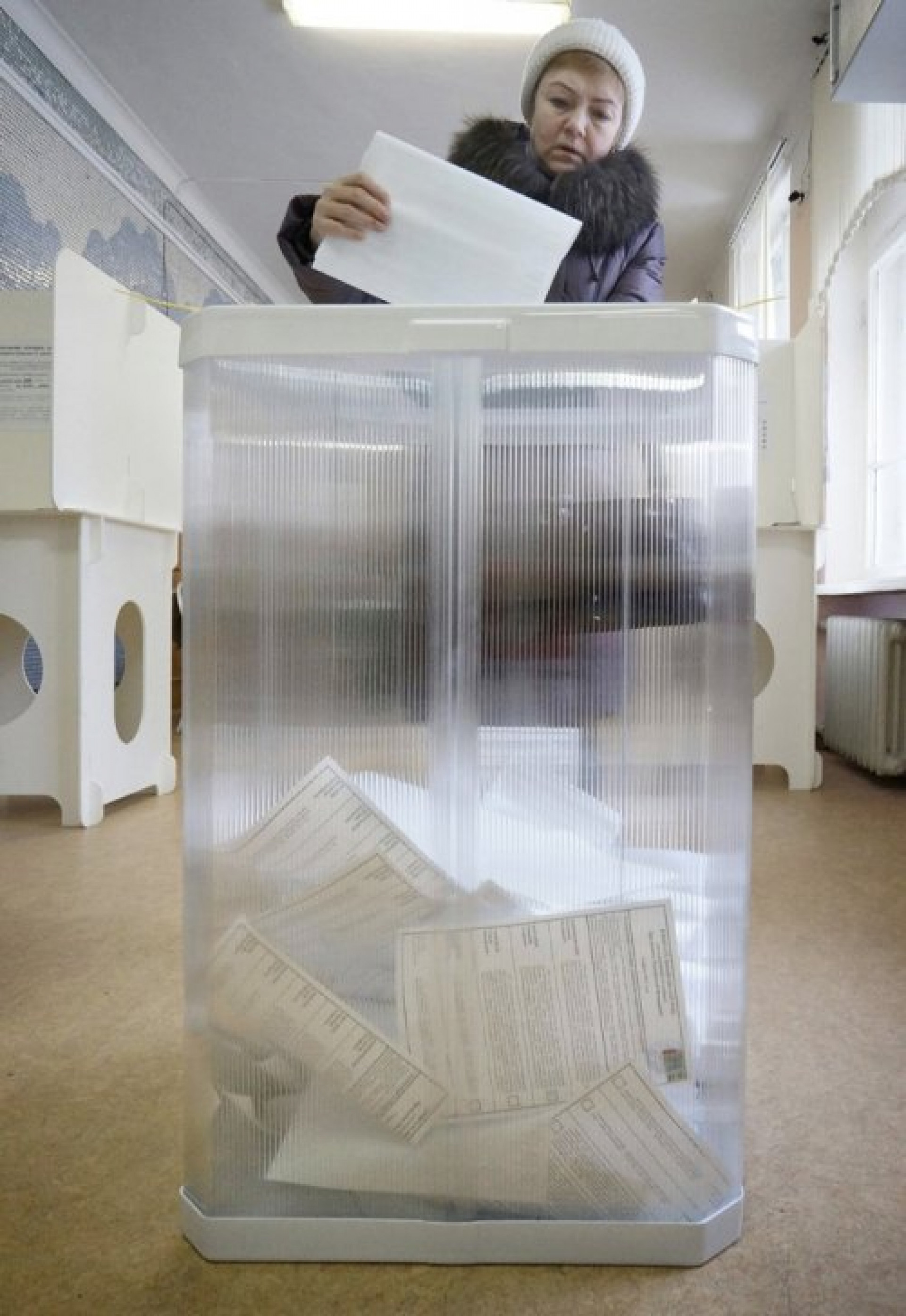 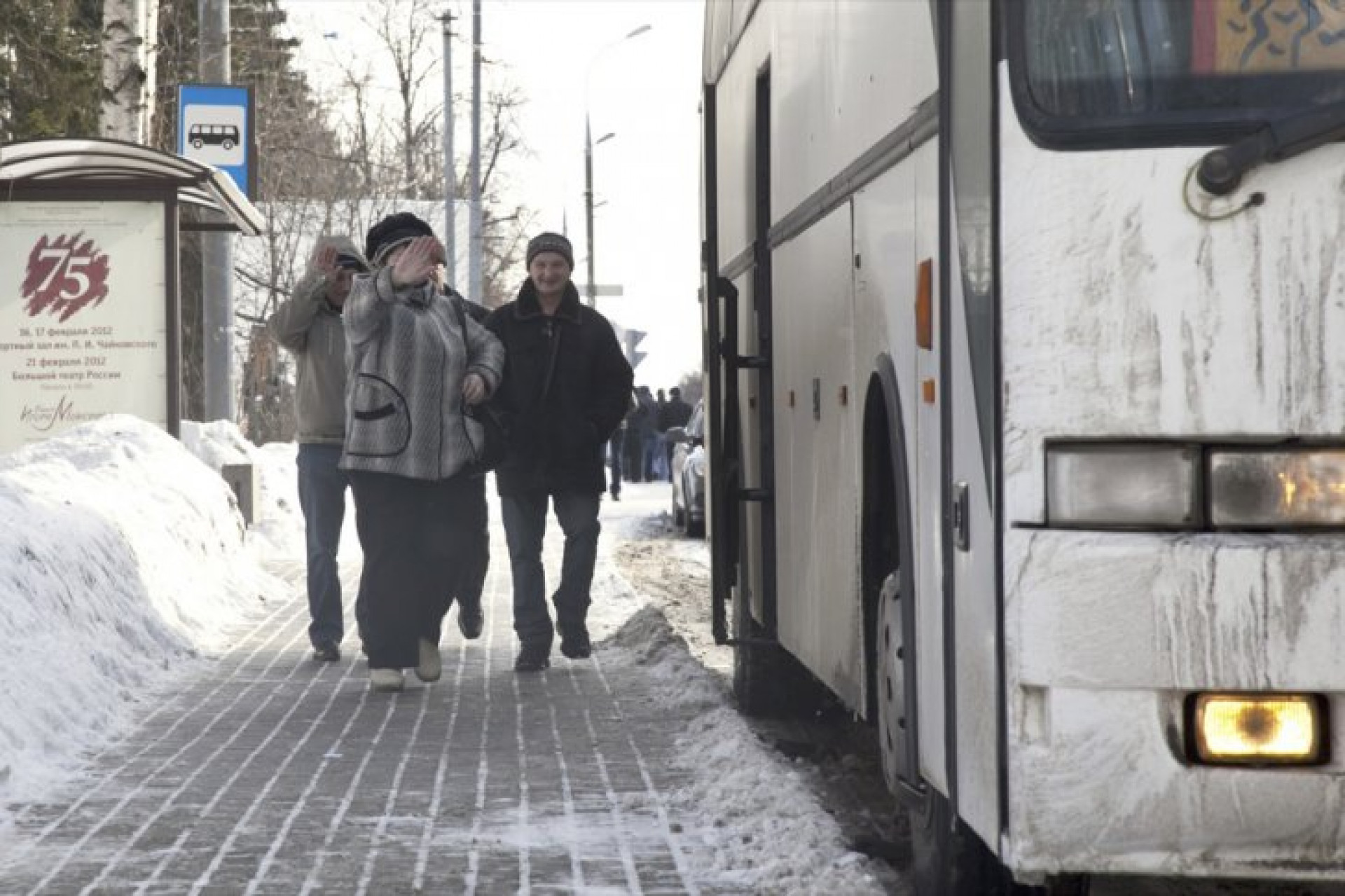 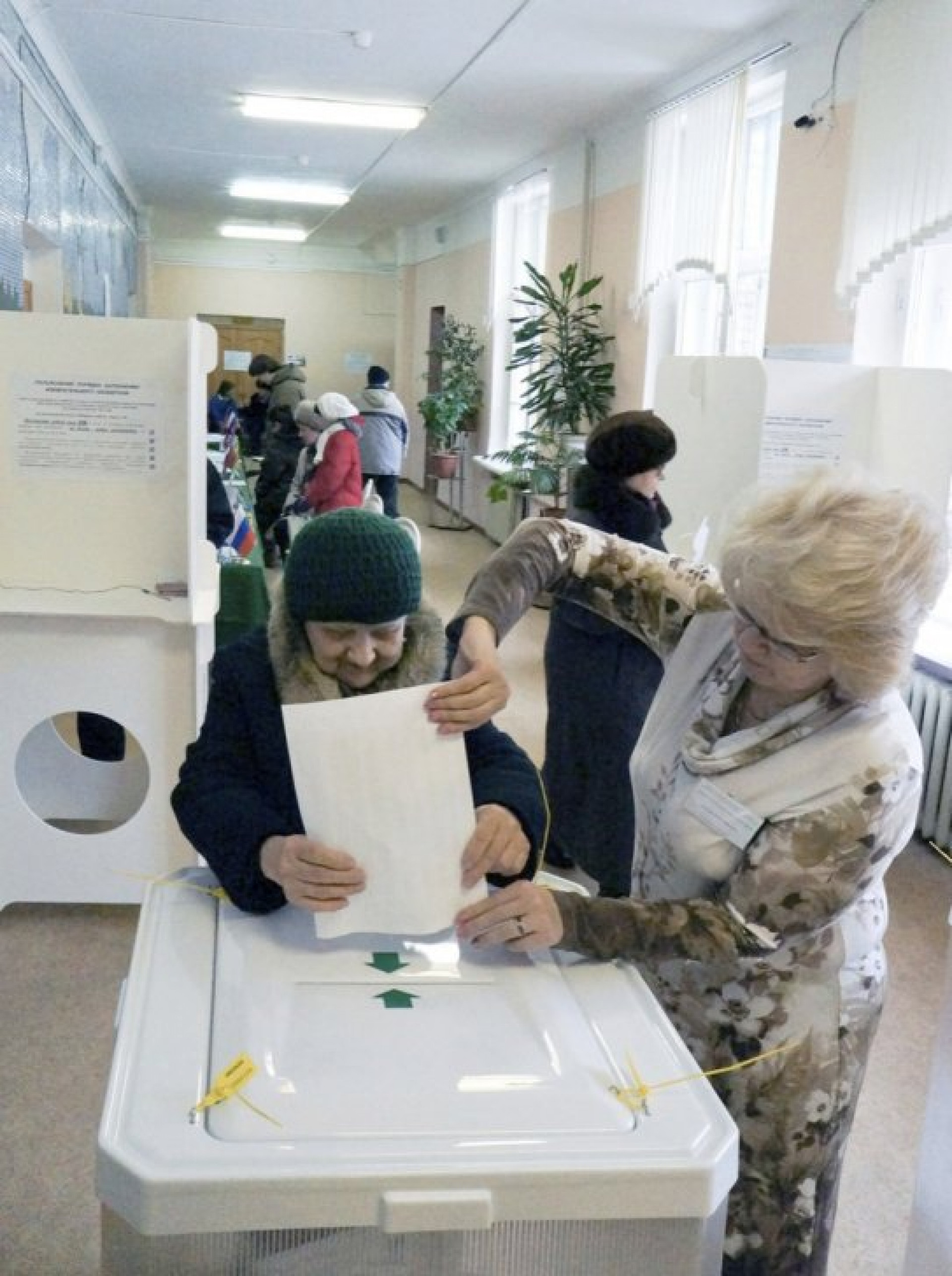 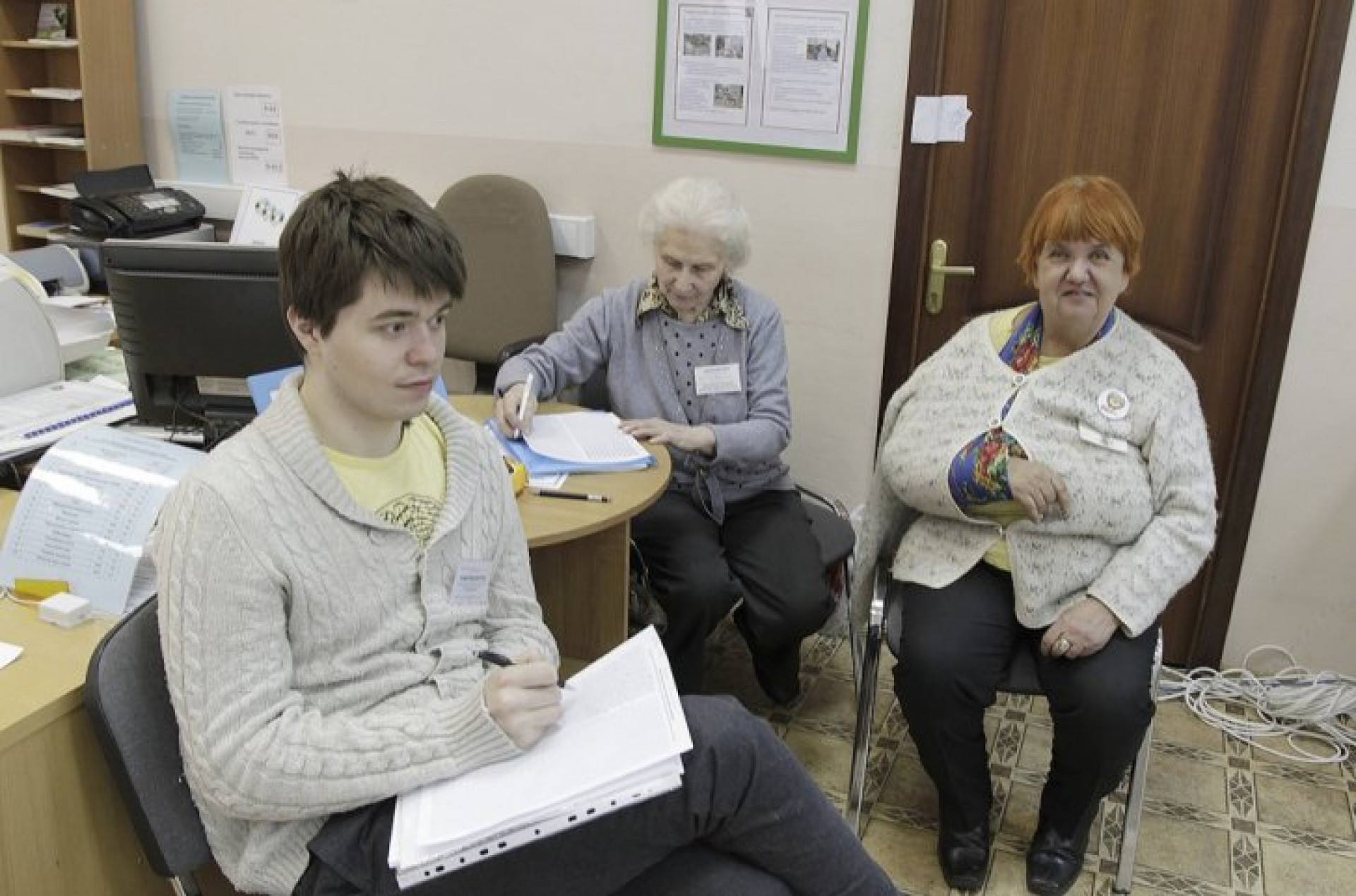 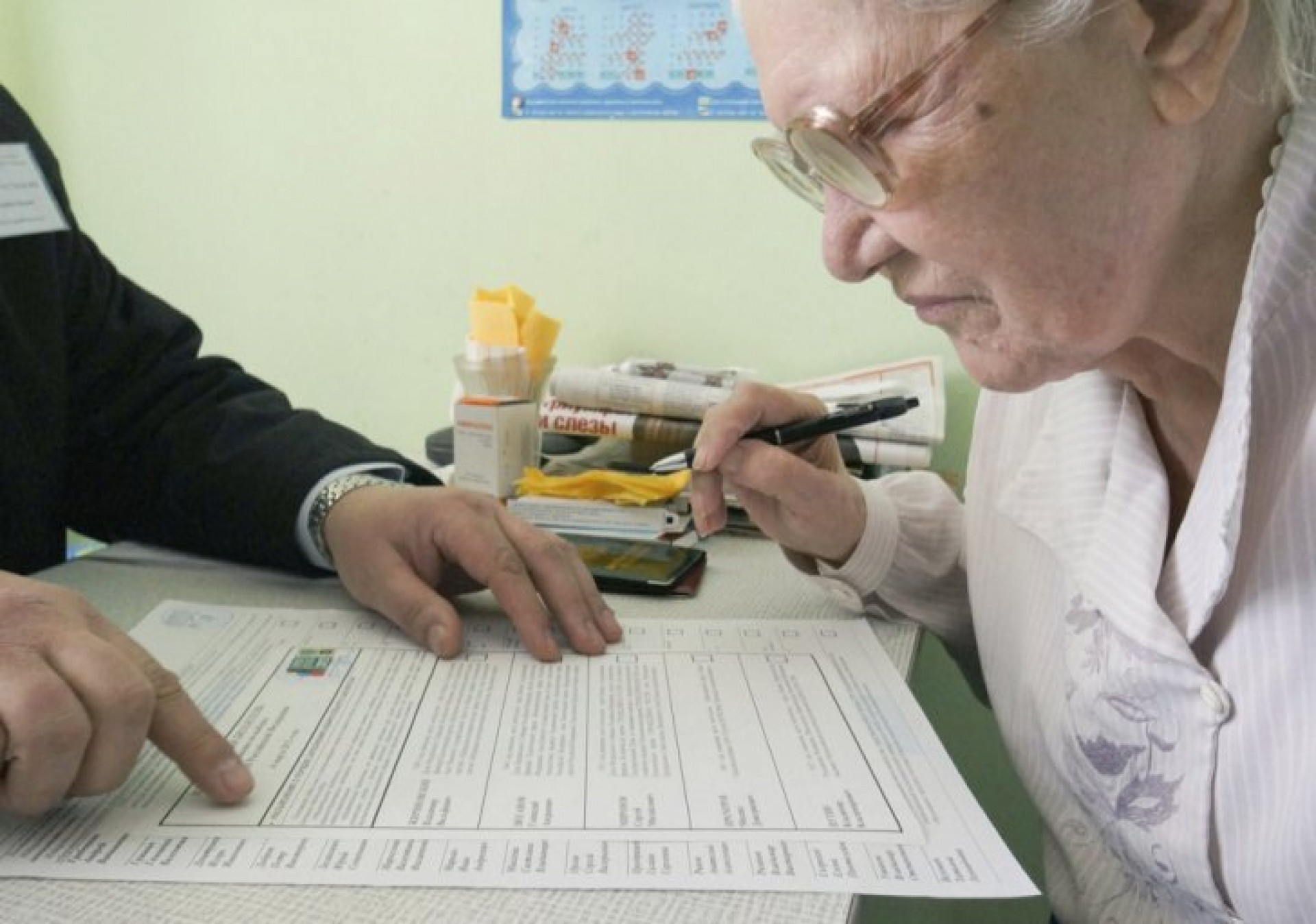 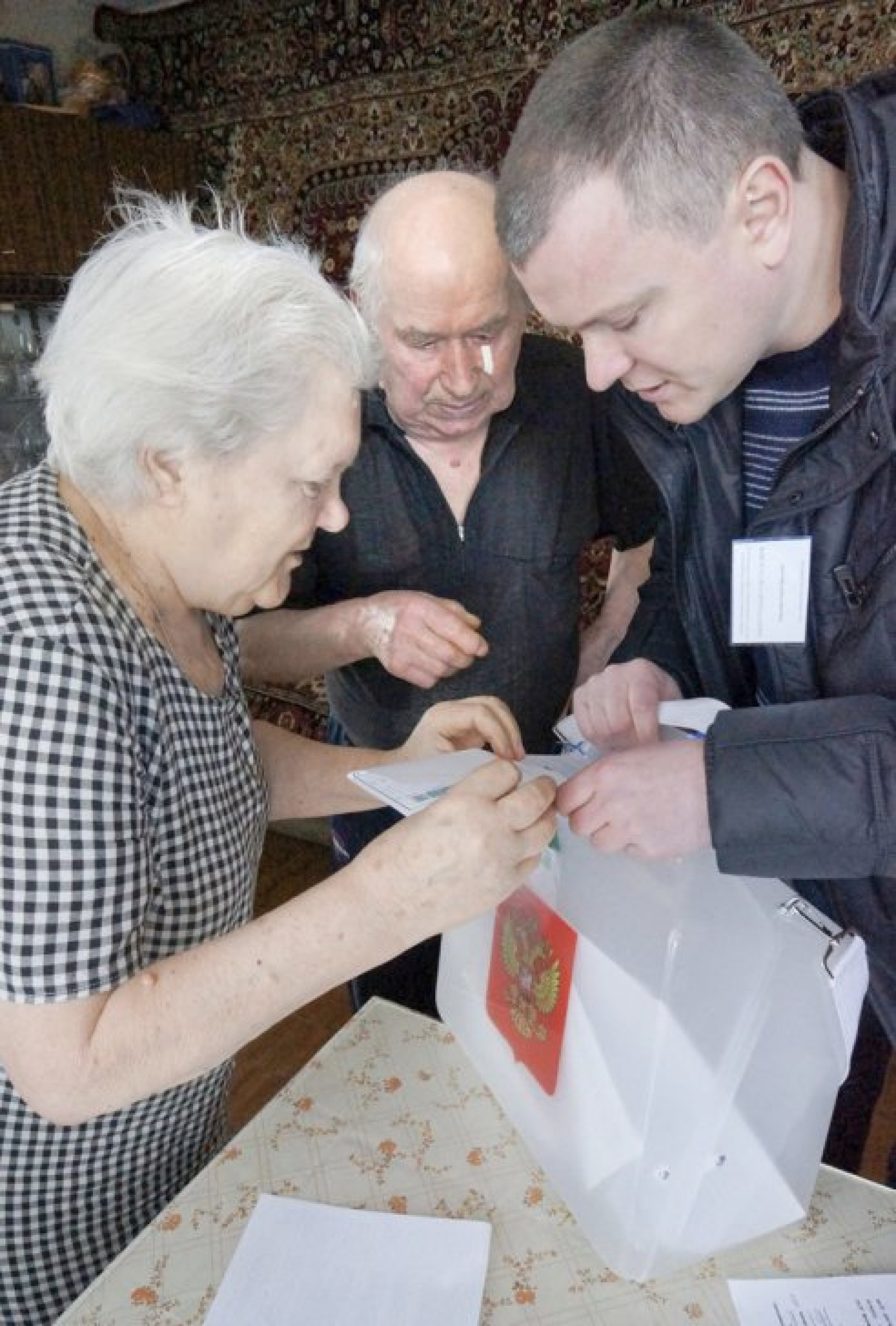 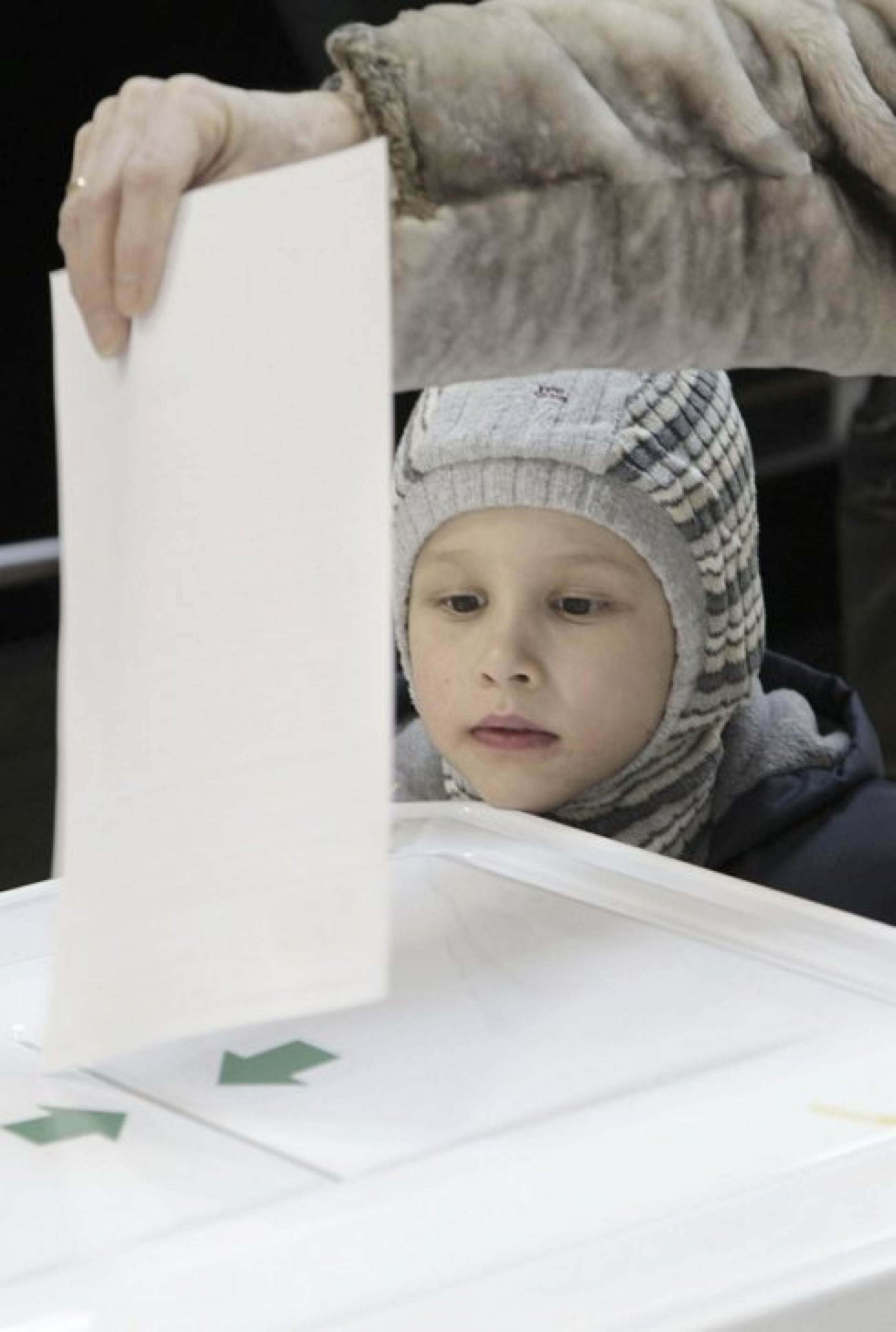 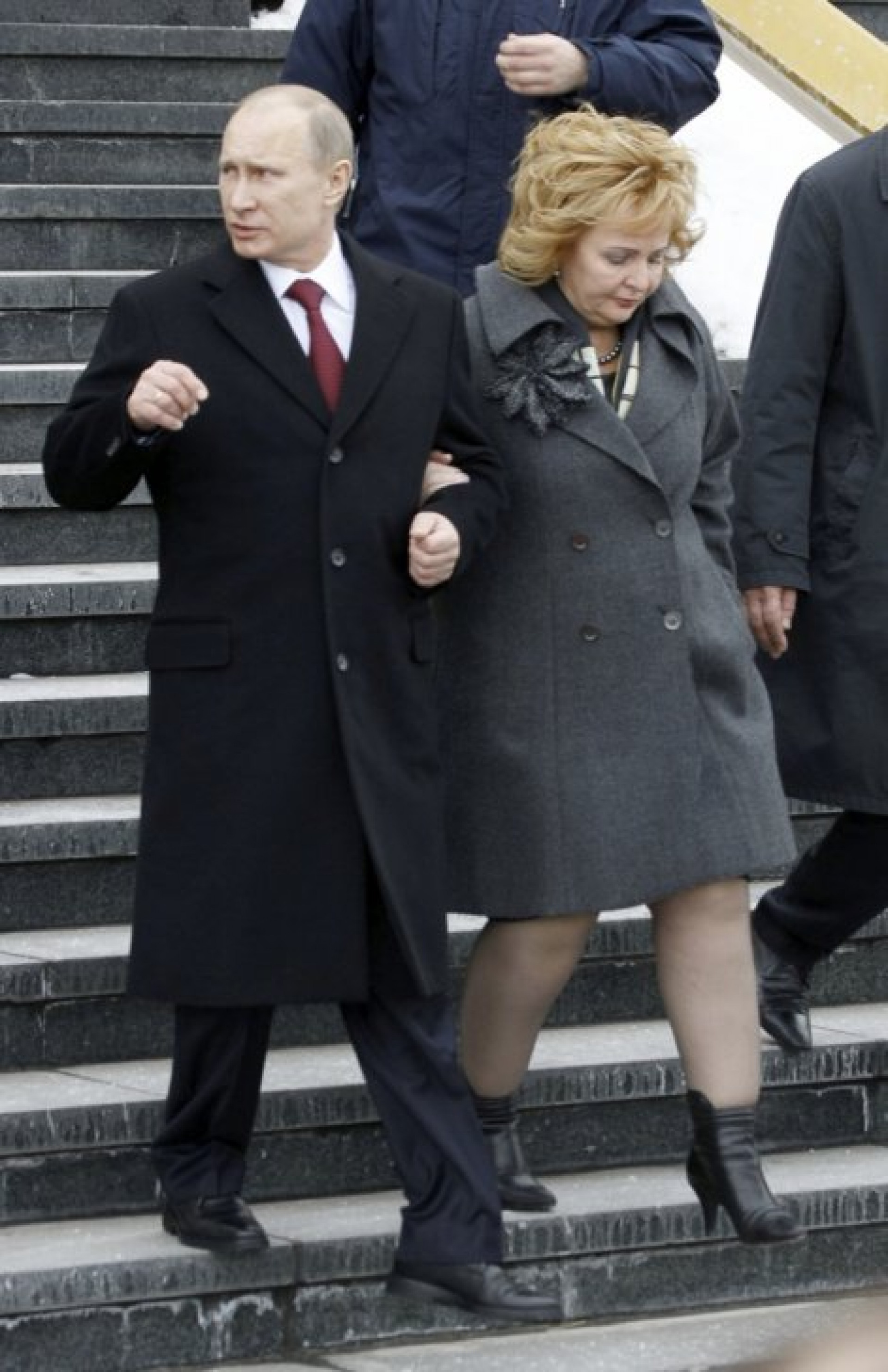 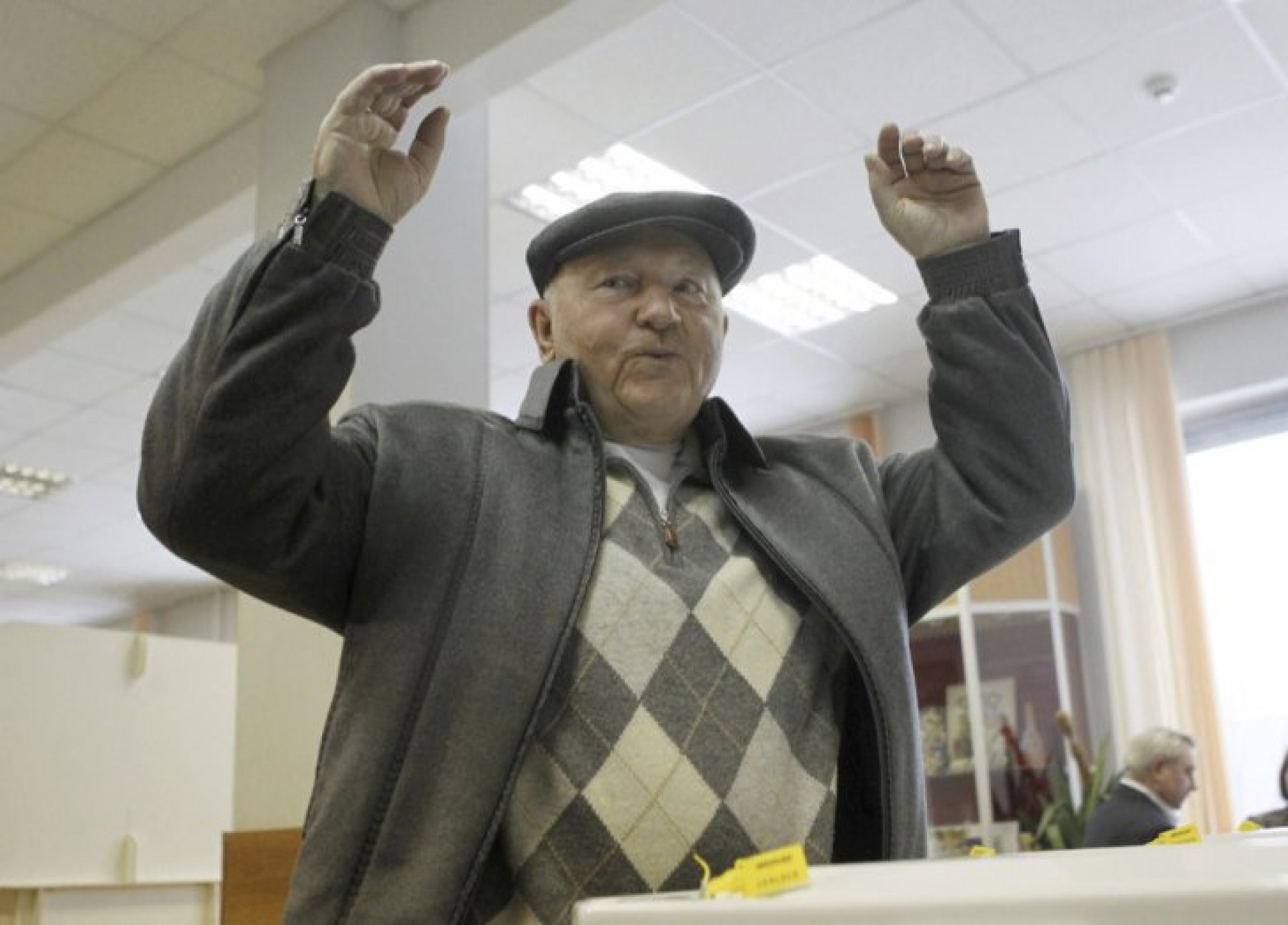 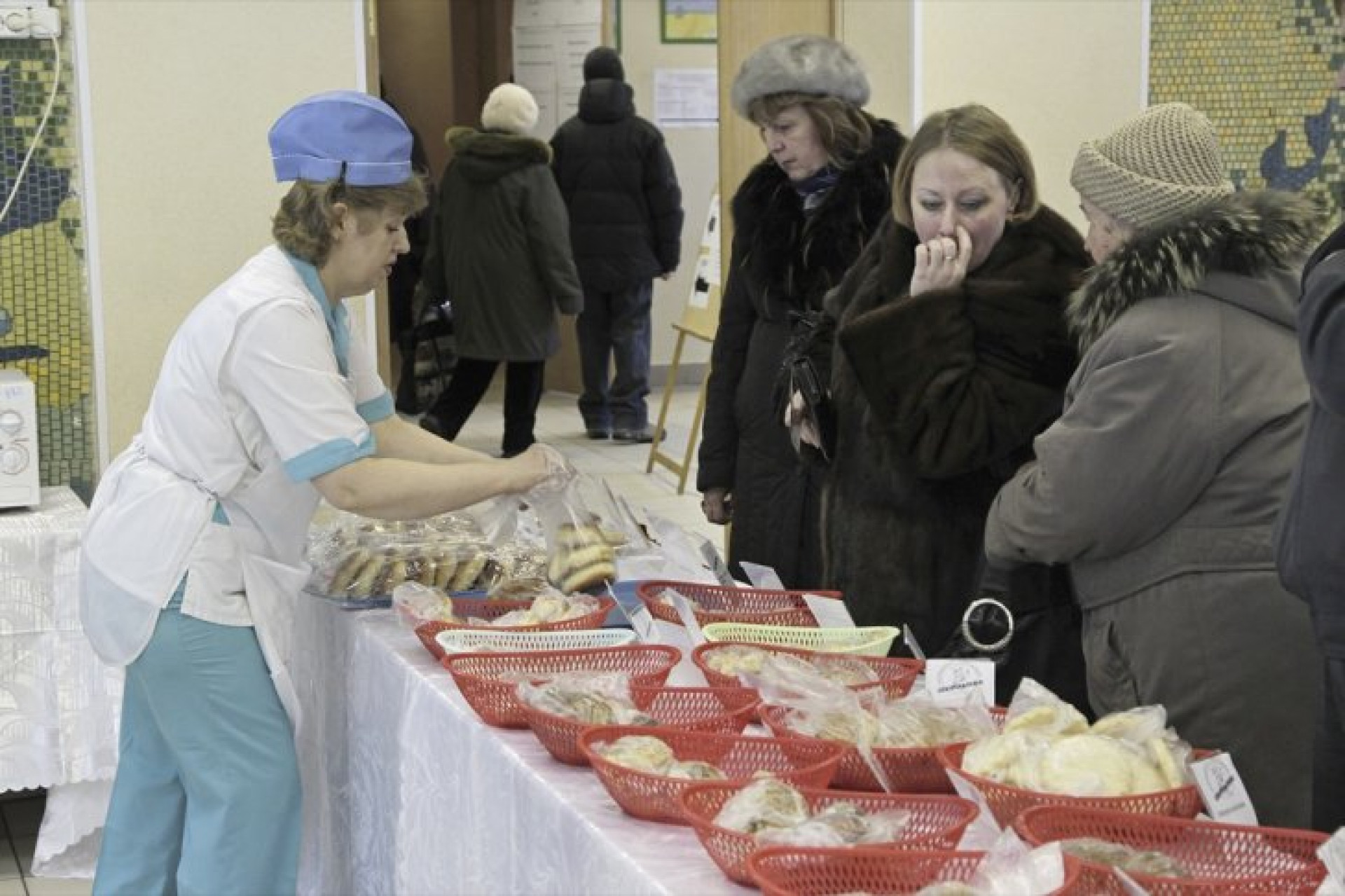 Vladimir Putin reclaimed the presidency Sunday in a landslide victory, winning more than 64 percent of the vote, according to early results. But widespread allegations of fraud suggested that the prime minister faces a difficult comeback to the Kremlin.

"I promised you we would win. We have won. Glory to Russia," Putin told thousands of supporters in a tearful address on Manezh Square late Sunday. "We won in an open and fair struggle."

Voter turnout was at 58 percent as of 7 p.m., according to the Central Elections Commission. Notably, the highest turnout was reported in Chechnya at 94 percent.

Sunday's results showed a marked decrease for Putin from the 71 percent he took in 2004, when he won his second term in office. The turnout then was 64.3 percent. But it was significantly higher than the 49 percent his United Russia party collected in the State Duma election in December.

Putin, dressed in a long black coat, voted at the Academy of Sciences in Moscow, accompanied by his wife Lyudmila, who has not been seen publicly in almost 18 months. At December's Duma elections Putin had voted alone.

"I had a full night's sleep, exercised and then came here," Putin told reporters in televised comments. He also dropped his ballot paper and had to pick it up before placing it into an automatic voting machine.

The prime minister left just minutes before three activists from the Ukrainian women's group Femen ran topless into the polling station attempting to steal the ballot box. They were dragged away by security as they screamed "Putin is a thief!" One had "Stealing for Putin" painted across her bare chest.

Reports of violations spread throughout the day, aided by social networks and by almost 200,000 web cameras, which were installed in pairs at most of the country's 90,000 ballot stations.

"This is the cleanest election in Russia's entire history," Putin's campaign chief Stanislav Govorukhin told reporters at United Russia's headquarters. "The violations our rivals and the opponents of our president will now speak of are laughable."

But already late Saturday, when the cameras started , bloggers discovered ballots lying in transparent ballot boxes in the Chelyabinsk region before voting had begun.

At a voting station in rural Dagestan, web cameras a man stuffing a voting machine with multiple ballots.

The Central Elections Commission promptly said the result in the village of Tarumovka was invalid, Interfax reported.

Many reports alleged that scores of people had been bused to multiple polling stations in a practice know as "carousel voting" — echoing similar accusations from the disputed December State Duma vote.

A reporter for The Moscow Times witnessed participants of a group of such voters appearing to be bused to several voting stations in the city's northwestern Kurkino district.

In Balashikha, seven kilometers east of Moscow, police detained a young man caught throwing a heap of ballots into the box at Polling Station No. 25.

Communist commission member Vladimir Prokopenko showed a Moscow Times reporter a video he recorded of the incident and said a second offender managed to flee.

Prokopenko said the commission chairwoman refused to sign a complaint by him. The chairwoman also refused to seal the ballot box, as required by law, and berated observers for directing voters to another secured box, he said.

She then expelled Prokopenko on the grounds that he took photos and videos of the voting. The Moscow Times reporter was also forced out.

At Polling Station No. 64 in the city center, angry observers said dubiously large groups of voters appeared in the morning who were not on voting lists and didn't seem to live in the area.

Alexander Gordon, host of a popular political talk show on state-controlled Channel One, said outside a polling station where there were allegations of fraud that he thought the vote was fair.

"What makes these elections special is that there is a large number of people who are interested in showing that they are unfair," he said.

But opposition activists said the vote seemed even less fair than the Duma elections that triggered mass protests.

Leading opposition figure Alexei Navalny said his Rosvybory project had collected reports of more than 6,000 violations by the early afternoon.

A  that collects information about violations said Sunday evening that it had received more than 4,500 reports so far.

The Golos election watchdog's site it had more than 2,600 reports.

Crowds of pro-Putin supporters began gathering outside the Kremlin in the hours before exit poll results were announced. Tens of thousands, many waving Russian flags and blue badges reading "V," crowded onto Manezh Square and Lubyanskaya Ploshchad to show support for Putin — and to head off opposition protests planned for Monday.

Putin later appeared to the Manezh crowd with President Dmitry Medvedev at his side. Their appearance was reminiscent of the duo's surprise appearance at a pro-Kremlin youth rock concert on Red Square on the night of Medvedev's election in 2008.

A worker from a power station in the peat-rich town of Shatura told a Moscow Times reporter on Manezh Square that he and his co-workers had been promised double pay for one shift and an extra vacation day if they showed up for the rally.

The crowd came after large groups hustled in and out of the polling stations starting bright and early in Moscow and beyond.

At Polling Stations No. 267 and 168 at the Degunino Children-Youth Center in northern Moscow, a crowd of around 100 voters of all ages was spotted at 11:30 a.m., a higher number than usually seen at national elections.

Natalya, in her late 20s, who did not give her last name, said she would vote for nationalist Vladimir Zhirinovsky because she felt he told the truth.

"He might start World War III, but at least he tells it like it is," she said. "When I listen to him — he's a good orator — I find myself nodding in agreement."

She added, though, that she felt there really was no one to vote for.

Many supporters of Vladimir Putin said he won their vote because they felt he promised greater "stability" and "peace" or because "there is no one better than him."

"I voted for Putin because I value stability — that is the most important factor for me," said Yelena Romanova, who brought her two teenage children to give them a lesson in participatory democracy.

"I didn't pay much attention to the protests of the past few months. I think people who really understand the situation and want to live here in Russia want Putin," she said.

"By the next election in six years, the people may be tired of Putin. Then I think Prokhorov might have a chance," she said.

Outside Polling Station No. 65, an elderly woman in a fur coat said she voted for the most intelligent candidate.

"You know him, the one who dislikes the Americans," she said, refusing to elaborate or give her name.

But some had very special reasons to vote for Putin.

"I don't let down my own", army sergeant Sergei Putin said outside Polling Station No. 64, adding that he was no relation of the prime minister.

Others said the protests following December's elections had driven them to turn their backs on Putin.

"I voted for Zyuganov, even though I am not a Communist supporter, but that could force a second round. I understand that we might rock the boat, but with all respect to Putin, I think we should live by the law," said Gleb, a 36-year-old lawyer, as he walked out of a polling station in northern Moscow.

Alexei Firsanov, a pensioner who described himself as a retired human rights activist and a former supporter of Yabloko leader Grigory Yavlinsky, who was barred from the ballot, said he voted for Prokhorov this time around because "he's a new face."

Firsanov described Putin in unflattering terms, but called anyone who voted for Zyuganov in the hope of forcing a second round "crazy."

A mobile voting unit went from apartment to apartment to collect ballots from the elderly or disabled. Many said they voted for Putin, but expressed puzzlement at the list of candidates for municipal elections that were also part of Sunday's vote.

"Roshchin, that's a nice name!" said Yelena Kvasnetskaya, 87, as she voted for somebody she admitted she had never heard of. "May God give Putin health. And may there be no bloodshed!"

Police presence in the capital was heavy. Hundreds of police trucks were parked in downtown Moscow. Earlier last week, the police announced that more than 6,000 policemen would be brought in from nearby regions for Monday's opposition demonstration.

Meanwhile, about 200 municipal buses from different places around Russia were seen lined up along the embarkment of Moscow River nearby the Kremlin. The presence of such buses was leapt upon by the opposition as proof of carousel voting.

But Putin supporters said they were used to bringing thousands of people to Moscow to rally in his support.